The Lamborghini Aventador LP780-4 ultimae represents the zenith of Lamborghini’s solus-ice V12, we drive it

More than an hour negotiating the busy, urban roads of Italy’s industrial heartland leaves me with a nagging doubt that our drive in what will be the last Aventador Lamborghini builds will be fruitless. There’s rain sheeting down and looking up it doesn’t appear like it’s going to change any time soon. Photographer, Wolfango, ahead in an Urus, its retina straining hue usefully visible in the conditions, has promised me he knows a road. The Aventador Ultimae I’m following in looks a paragon of restraint in comparison. Finished in matt Grigio Acheso and Grigio Teca with Rosso Mimir accents, it’s not only relatively stealthy, but underlines how even something as mundane as two-tone grey with red can sound contrastingly incredible in Italian. 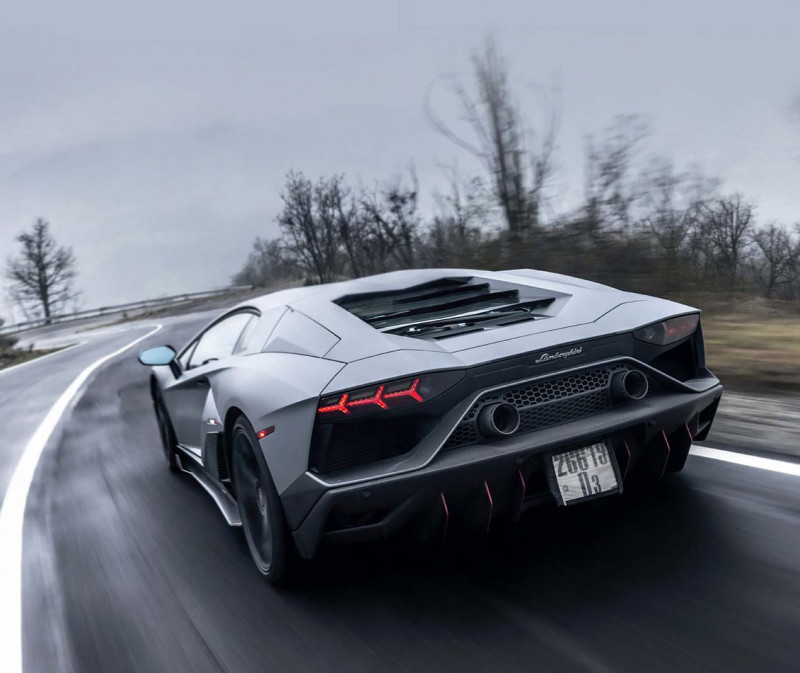 That’s the launch scheme for this, the Ultimae coupe, or, correctly, the Aventador LP 780-4 Ultimae Coupe. It’s one of 350 Lamborghini will build, along with 250 Roadsters, these being the last hurrah for Lamborghini’s V12 flagship model before it finally bows out. It’s been a long time coming, but when Lamborghini launched the Aventador back in 2011 it claimed it had jumped a couple of generations, so that a lengthy production run is forgivable. Its specification remains hugely compelling, too, the stiff carbon fibre monocoque being the base which aluminium frames are hung off, with fully independent suspension and a big, naturally-aspirated 6.5-litre V12 situated ‘Longitudinale Posteriore’ in the rear. That’s the ‘LP’ of the name, the 780 relating to the horsepower and the ‘4’ being four-wheel drive. 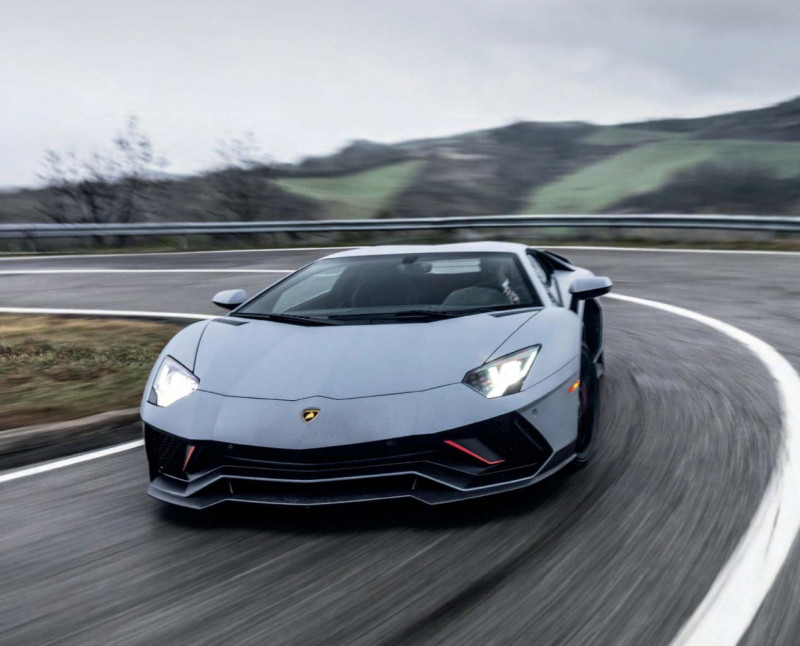 That output is higher than any Aventador before it, 7kW more even than the track-focussed SVJ, this Ultimae is not just the last, but the most powerful Aventador ever. The rest of the Ultimae, is, understandably, something of an Aventador greatest hits, with elements of the SVJ and the S mixing to create this limited, final, model. It’s been beautifully curated, as even during the mundane element of our drive so far, it’s evident that Lamborghini’s constant development of the Aventador has been to its enormous benefit. It rides with surprising civility on the less than perfect tarmac, and that massive V12 is easy in traffic. It’s even relatively easy to see out of, which is always a surprise when you’re lucky enough to sit in one. 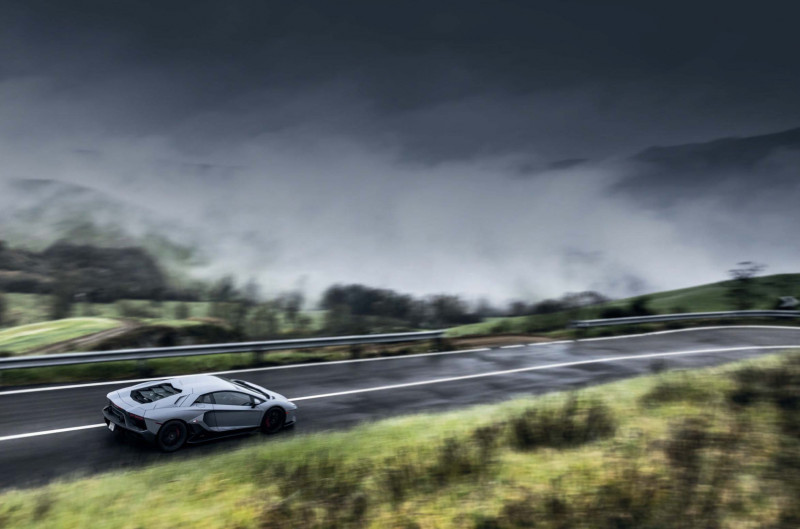 Of course, the familiar quirks remain. Many will highlight the shortcomings in the infotainment, its lack of a touchscreen interface and the paucity of the size of the screen itself. We’re not about to disagree, entirely, but the reality is the old Audi-based MMI system works, and hooks up to your smartphone should you need it. Surely, too, a 574kW V12 with an 8,700rpm redline, 2.8 second 0-100km and 355km/h capability is entertainment enough? The transmission, another long-establish idiosyncrasy in the Aventador is a little bit more difficult to ignore. The robotised ISR (Independent Shifting Rod) seven-speed gearbox remains the Aventador’s biggest shortcoming. In a world long-used to seamless, dual-clutch shifts the Aventador’s circa 50 millisecond shift can feel like forever when you’re asking for another ratio.

Not that there’s been much opportunity to haul through the engine’s entire range and tug the paddles for another cog, 574kW not being much use here on streaming wet, heavily congested roads. Just as I’m resigning myself to the fact this Ultimae drive might be a bust, the Urus ahead turns off and quickly pulls over. Wolfango jumps out ahead and explains we’re here. Signposted to Zocca, the SP26/SP623 is a road that climbs up a hillside following the path of least resistance. On a map it looks as if someone’s dropped a ribbon, and, perhaps as a result of today’s precipitation, it’s mercifully free not just of the cyclists that usually populate such interesting climbs, but of virtually all other traffic, too.

Photography might be the priority, but repeatedly running up and down the same stretch of road at speeds slow enough to keep lenses dry reveals a route that’s been well worth the wait. The tarmac might climb the hill following its contours closely, but it’s smooth, and wide. Switchback hairpin bends mix with longer, sweeping curves, with all manner of lengths of straights. It’s mostly clearly sighted, too, and all the time we’ve been here, there’s been next to no traffic, and there’s one less car now that we’ve finished shooting.

The Urus heads back to Sant ‘Agata Bolognese, leaving the Ultimae and this road. Time spent in, and around, both means we’re now in familiar territory, and with the cloud cover having broken and the road now merely damp rather than soaked, the 14km of road before civilisation is too much to resist. The preferred drive mode here, and everywhere, is Sport. Strada is a little bit too nannying, it so quick to intervene if there’s the merest detection of slip, that it frustratingly punctuates progress. Sport’s thresholds are enough to feel the Aventador Ultimae’s balance, without completely surrendering to the electronic stability and traction systems. The suspension, too, remains composed and supple enough, maintaining fine control without discomfort, while the gearshifts are sped up so as not to feel quite so yawning in their selection, the throttle mapping is such that it’s quick but progressive. With a clear road, Corsa (Race) is tempting, but it ups the Ultimae to a level that’s just too focussed, too harsh, to the detriment of smooth progress, the gearshifts fired through with a brutal ferocity that sees you audibly gasping as your neck’s snapped in response.

If Sport’s a compromise, then it’s unquestionably a good one, because the Aventador Ultimae feels in its element here. The steering, old enough still to be hydraulic opposed to the electric of most rivals, is imbued with detail, its weighting good, its accuracy never in question. Turn the wheel and there’s only the merest hint of understeer before the Ultimae’s nose turns in, it feels natural, quick and incisive, shrinking the big Lamborghini slightly, which on these roads is no bad thing. There’s masses of traction, most of the time the power is directed to the sizeable 355/25 ZR21 Pirelli P Zero Corsas at the rear, but if there’s the need some of that drive is pushed to the front axle. You’ll rarely notice it doing so, but the Aventador’s mid-corner poise is remarkable, as is its exit, which can be taken with a degree of corrective lock at the wheel, the Aventdor revealing its playfulness here.

That balance, and the ability to read it, is what’s so impressive, and immersive, all of which makes the transmission more dominant. Downshifts are fine, quick enough when you’re leaning on the hugely reassuring brakes, but when you’re asking for another gear while accelerating hard you need the insight to lift slightly to ease the transmission. Forget it and you’re left with a frustrating pause in acceleration. Have the discipline to drive around it and the Aventador Ultimae can cover ground with relentless ease.

Even here there are few opportunities to really explore the engine’s full range. There’s so much performance below 6000rpm you could short shift and still make indecent progress. The big 6.5-litre V12 is ridiculously quick up to that point, but above it the ferocity with which it continues to gather pace is genuinely mindblowing.

It’s backed, too, by the sort of glorious, rich mechanical symphony of the likes that’ll soon be consigned to history, consumption combustion like this no longer acceptable for this world. Underlining that is that this car’s replacement will still come with a V12, but it’ll feature electrical assistance.

That’s a necessity, but right here and now that’s for another day, because on reaching the top of the road there’s the need to drive back down it, and if I’m quick, as inevitably I will be, a repeat of the above. And that’s exactly what I’ll do, while I can, in a car that’s soon to be replaced. But what a way to bow out, this might be the final Aventador, but they’ve saved the best until last.

The Specs The Ultimate Aventador

ABOVE RIGHT Has grey on black ever worked so well?

BELOW RIGHT Tall drivers may want for headroom in an Aventador