Friedrich Geiger - Gone but not forgotten

To many, he’s Mr Gullwing – though he wasn’t always credited

At £115 million it’s the most expensive car ever sold at auction. In most reports the 1955 Mercedes 300SLR has been referred to as the ‘Uhlenhaut Coupé’, accurately reporting the moniker attached to it back in its day.

Uhlenhaut was, of course, the immensely talented project engineer responsible for the exotic mechanical specification of the famed 300SLR sports racers derived from the Mercedes Grand Prix cars. But the SLR Coupé is far more than just a sophisticated mechanical package: to many it is quite simply the most beautiful racing car to ever turn a wheel. Yet Friedrich Geiger, the man who penned its sinuously seductive curves, was never mentioned in the press reports of the sale. Ironic to consider that this artefact has commanded a price that puts it on a level with fine art masterpieces yet the artist who ‘drew’ its form should not be credited. 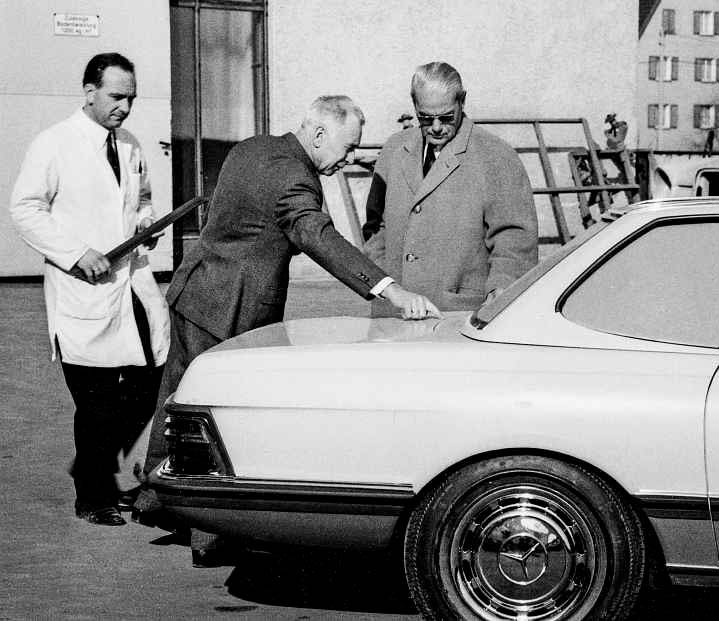 Friedrich Geiger was born in 1907 in Seußen, 50km to the east of the Stuttgart home of Daimler-Benz. By his early twenties he had completed a strict German apprenticeship as a cartwright and was declared a Master Craftsman. In parallel he studied vehicle construction at the Meissen Engineering School and, on his graduation in April 1933, he joined Daimler-Benz as a design engineer at its ‘special vehicle department’.

This was only a few months after the National Socialist Party came to power, led by Adolf Hitler. The significance of this was that the Party wanted large armour-plated limousines and designing these behemoths became the responsibility of the special vehicle department. Hitler also instigated an expansion of the Autobahn network, which encouraged the production of high-speed cars. Still in his mid-twenties, Geiger was also responsible for the spectacular flowing lines of the fabulous 500K and 540K special roadsters.

After WWII, Mercedes underwent a period of restructuring and Freidrich left the company in 1948 before returning to the Sindelfingen styling department two-years later.

At the luxury end of Mercedes’ output, the 300-series was vying with Rolls-Royce to be ‘the best car in the world’, and its drivetrain, through expediency, formed the basis for the company’s return to international motorsport. Under ‘Rudi’ Uhlenhaut’s direction, a radical tubular spaceframe was constructed to hold the 300 saloon’s running gear, and in 1952 the 300SL – Sports Leichtbau – triumphed at Le Mans and in the Carrera Panamericana (as you can read from). This excited the US importer Max Hoffman, who famously pledged to take 1000 300SLs if the factory would build them. An offer they found impossible to refuse. The racecars had introduced ‘doors in the roof’ as a means of boarding the beast and, although aerodynamically efficient, the simple, slab-sided, bodies were very much the product of the wind tunnel rather than a stylist. Geiger, with his artist’s eye for form and the subtlety of a curve, transformed the car into the legendary 300SL ‘Gullwing’.

Launched to the public in 1954, the car was a sensation. The starkness of the racer’s slab sides was relieved by introducing a gentle sweeping curve from stem to stern at the waistline, the addition of ‘eyebrows’ over the wheelarches, and a large vent to the rear of the front ’arch to extract engine heat. The Mercedes tri-star floated prominently in the reshaped and deeply recessed radiator opening. When Mercedes decided to make a coupé version of the 300SLR sports racer, Geiger once again worked his magic, producing a minimalist masterpiece of sinuous curves that, as the cliché goes, looks like it’s doing 100mph (or, in this case, should that be 176mph?) when standing still.

In 1957 an open-top version of the 300SL appeared, perhaps even more beautiful than the closed car, with a few styling tweaks to the surface treatment, extending the cooling vents’ chrome bars into the Roadster’s conventionally opening doors, all imparting a feeling of forward momentum.

By then Geiger was head of the styling department but, unlike the modern breed of designers, he was not one to strut his stuff. Throughout his career, Geiger was content to remain in the background, nurturing and guiding his very talented staff as they designed some of the finest and most refined road cars of their day. To mark his 100th anniversary, author Günter Engelen, writing in Mercedes- Benz Classic, aptly summarised the man: ‘Friedrich Geiger was rather the type of reticent conductor who was capable of bringing out the very best from his chamber orchestra without being overly ostentatious.’

This unpretentious yet gifted man retired from Mercedes-Benz on the last day of 1973. A talented painter, he continued with his art, leading a quiet life with his wife Johanna, whom he had married in Meissen Cathedral in 1936. Friedrich died on 13 June 1996.

Article type:
Review
friedrich geigermercedes benzmercedes-benz
—
121
Write a comment
No comments yet. Be the first to add a comment!