Mercedes-Benz is in a state of transition, moving from old-world internal combustion to battery-electric vehicles. We join key engineers testing forthcoming electric vehicles, including the new EQS SUV, and discover this switch to battery power has provided fresh motivation for staff, who are fully embracing the company’s new direction.

We have no boundaries, basically. What we didn’t have, though, was a baseline. We had to re-learn the car – packaging, crash behaviour and more. The design process was the most exciting thing in my whole career, because you really could, together with Gorden Wagener [Chief Design Officer Mercedes-Benz] and his team, have freedom,” explains Christoph Starzynski, Vice President Electric Vehicle Architecture & Head of Mercedes-EQ. 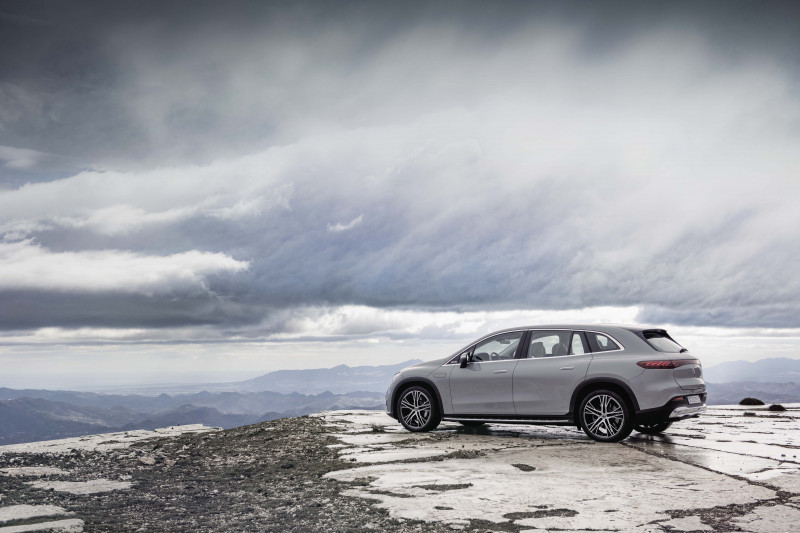 I’m sitting alongside Starzynski in a Mercedes-Benz EQE, doing some final testing in Arjeplog, Sweden. It’s the first time Starzynski’s been here in two years, due to the global Covid pandemic, and he admits he came directly from the airport to Mercedes-Benz’s testing area and jumped straight in a car. “I’ve missed this,” admits Starzynski, saying he really enjoys the winter testing element of his work. All Mercedes-Benz cars go through the company’s usual testing of at least two winters and two summers, and – at the time of our visit – the EQE was just coming to the end of that process. 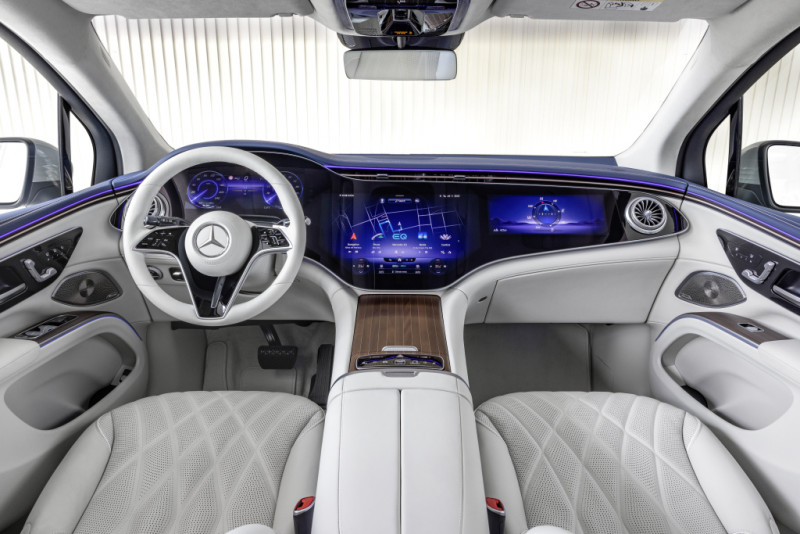 There’s a real buzz among all the Mercedes-Benz engineers on this test programme. We’re riding alongside as the battery electric EQE and EQS SUV are being tested, along with the next GLC (revealed in June), with its internal combustion, mildhybrid drivetrains. It’s not just the fact that the engineers are actually able to be here, but the feeling that this is the culmination of many years of new thinking, creativity and innovation, that’s been instrumental in not just changing the direction for future mobility, but transformative in how the company itself works.

Starzynski explains that with the EQ models. “We changed the way of working, we wanted to do things a bit differently and we wanted agile teams, less hierarchy. We’re going to have so many new innovations, we have stakeholders within agile teams and we did sprint reviews like you’d do in a software industry. We even had an arena as a workspace, a huge space with no fixed desks and benches, and we did reviews there [from 2017 to Covid]. Even the board came in there. The transition to EVs has changed how we work as a company. It was fantastic seeing the interaction, and the creativity.” 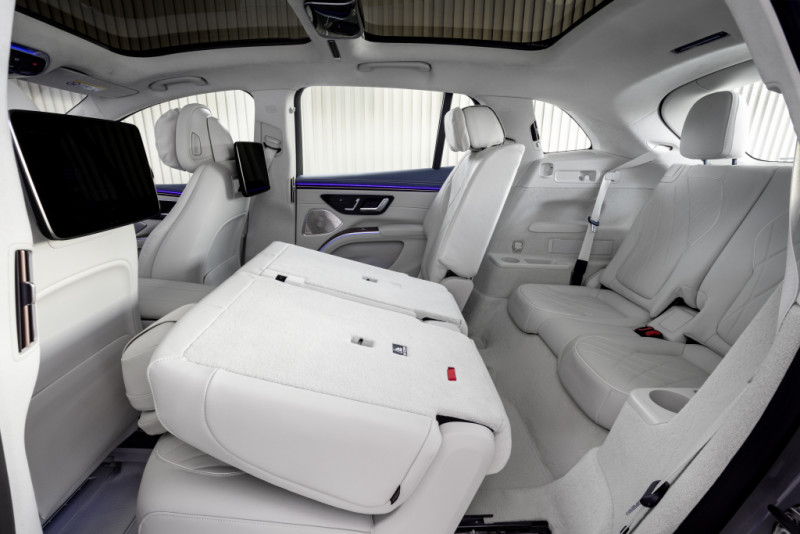 That sentiment is echoed by Holger Enzmann, Head of Overall Vehicle Development EQS SUV, who says he’s never enjoyed his work more than he does now. “It’s immensely satisfying. Back in 2015, at the beginning, we were a small group and a lot of people didn’t think [going electric] was the right way, but now that view has changed.”

The team working on EV-specific architecture that underpins the EQS, EQE and EQS SUV comprised just 50 people, but now the entire company is involved. That shift has been seismic. “Back in 2017, nobody would have known that the board and CEO would say now that we’re going entirely electric,” explains Starzynski. The company stated in July 2021 that all newly launched architectures from 2025 will be electric only, though there’s a bit of a proviso in that statement – “where market conditions allow”.

To facilitate that shift, Mercedes-Benz is undertaking a comprehensive plan to accelerate research and development, with investment in battery electric vehicles between 2022 and 2030 amounting to over 40 billion. The EQE and EQS SUV here then are just the beginning of the story, with more models to come. Unlike some EV rivals, Mercedes’ position as a legacy manufacturer means this brave new world is approached in a traditionally methodical manner. “We undertake two testing seasons in summer and two in winter. We also use cold chambers to drop to -25C,” explains Enzmann. “The testing procedures are the same whether it’s BEV [battery electric vehicle] or ICE [internal combustion engine].

“ESP [Electronic Stability Program] and safety systems are tested here, there’s high effort testing for the HVAC [Heating Ventilation and Air Conditioning] systems here, and the fi ne snow – it’s all difficult conditions. We need the BEVs to work in Sweden as well as Los Angeles.”

The EQS SUV uses the same 12-module 107kWh battery as the EQS saloon, although Enzmann admits using a smaller battery is feasible. “With a vehicle this size, customers will expect the range and this means using a bigger battery.”

There are two motors, one per axle, with the front motor able to recuperate as much as 70 per cent of braking energy.

In addition to the extensive real-world testing, Mercedes- Benz has six dedicated eDrive test benches, which run almost constantly, with programmes running from several weeks to as much as an entire year for an endurance run. Bench testing is undoubtedly crucial, but nothing beats real-world tests. While some of the previous winter tests had to be undertaken at Mercedes-Benz’s Immendingen facility in Germany due to Covid, with travel now possible the more usual testing schedule is being undertaken in Arjeplog, Sweden. The EQS SUV will have also been tested in Austria, Finland, France, Spain, Italy, Dubai, South Africa, USA, Mexico, China and Japan. A team of Enzmann’s colleagues are undertaking dune driving in Arizona while we’re out testing in Sweden.

“We are amazed at the capabilities of the vehicle. With fi ne tuning, we can manage the torque on each wheel 160 times per second, 10,000 times per minute, and that controlling of each wheel helps us in the sand and snow,” Enzmann explains. “It wasn’t designed to go off-road, but we found it could, very well, so we have off-road specific screens and functionality. Our off-road testing colleagues were so impressed with the quietness – you don’t hear the car, you hear the birds. Normally when off-road, you hear the effort, but not here.”

That lack of masking sounds from internal combustion has meant additional work for the NVH team, with both vehicles featuring things like foam-fi lled body cavities, foam within the tyres and things like double glazed glass to maintain serenity, Starzynski saying that working from the basis as a luxury manufacturer was advantageous here. But regardless, BEVs present unique challenges in relation to NVH. “Every part of the car has the ability to make its own frequency,” Starzynski laughs.

Not that you’d know it here, even riding on hard-packed, far-from-flat snow and ice. The serenity in both the EQE and EQS SUV is palpable. Both cars also have ample range for our full day of activities, covering all aspects of the stability, traction and braking systems.

Enzmann and Starzynski are visibly excited by the potential of electric drive systems. Of course, maximising range is top of the wish list, but there is so much other untapped potential, including in vehicle dynamics, just waiting to be exploited. Witnessing first-hand the enthusiasm of engineers as Mercedes-Benz enters the brave new world of electrification would be enough to allay the fears of even the greatest EV doubter.

There are two motors, one per axle, with the front motor able to recuperate as much as 70 per cent of braking energy

The team working on EV-specific architecture comprised just 50 people, but now the entire company is involved