Before Elvis changed everything, Cary Grant and Clark Gable defined American style. Sports coats and fedoras were the fashion, society centred around country clubs and the car to have was a big, luxurious straight-eight. Peter Rickinson is keeping that era alive with a 1948 Chrysler New Yorker…

Peter Rickinson came to our attention not long after buying his first American car, a 1954 Chrysler Imperial, which we featured in the September 2019 issue. As we reported at the time, he had mainly enjoyed classic Rovers before a holiday in Cuba opened his eyes to American cars. He was primarily drawn to the subtler glamour of the top-end models of the Forties and early Fifties. Even then, it wasn’t entirely by design that he ended up with the Imperial. He’d really been seeking something a little older, but he fell in love with it and that was that. 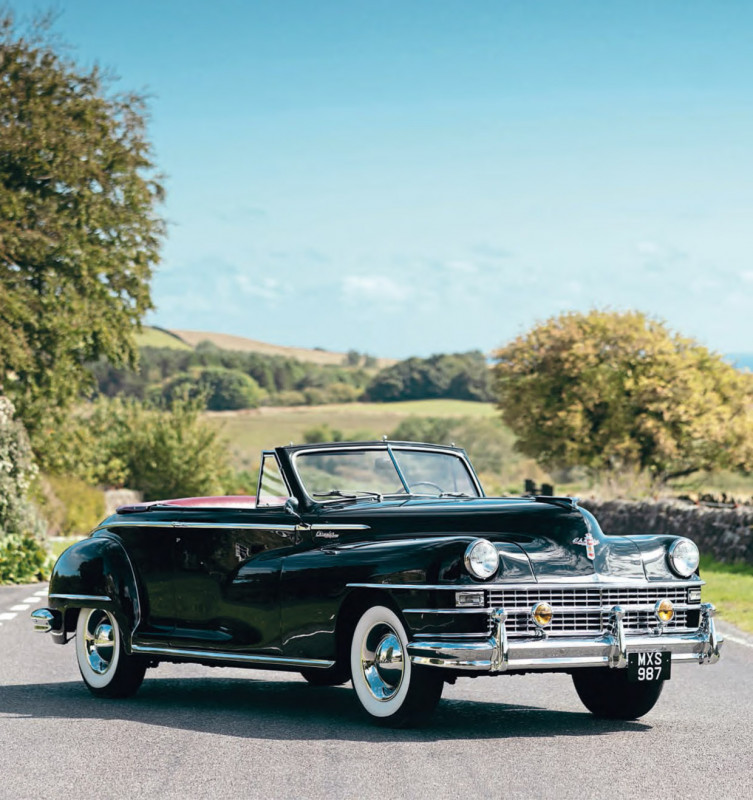 “I FIRST SAW MINE ONLINE IN THE AUTUMN OF 2019 AND I THOUGHT ‘I REALLY HAVE TO HAVE THAT’, BECAUSE IT’S A CONVERTIBLE, SO IT’S RELATIVELY RARE, IT’S IMMACULATE AND IT HAS SOME HISTORY.”

He still hankered after a Forties car, and he found a 1949 Buick Roadmaster Sedanet to fill his double garage. He’d seen a 1948 Chrysler New Yorker convertible for sale for some time which really took his fancy, though, and once he committed to buying it, he had to contemplate the matter of finding storage or parting with one of his other cars. He had plenty of time to worry about that while the car was being shipped. Until then, he had much to look forward to. He tells us how he came to buy the New Yorker: “Basically, I got greedy and I realised I’d become a bit of a Mopar man, so I was looking for an earlier Chrysler, not specifically a New Yorker, but another participant at the Rally of the Giants has a fabulous ’48 New Yorker sedan. Having driven his, it got me going. 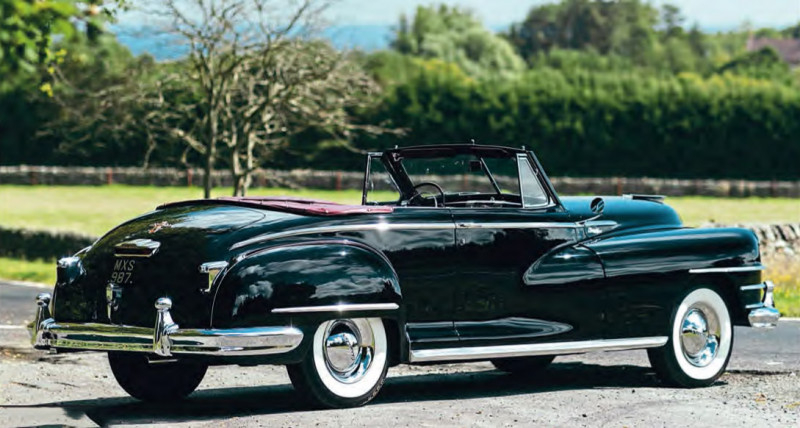 “I first saw mine online in the autumn of 2019 and I thought ‘I really have to have that’, because it’s a convertible, so it’s relatively rare, it’s immaculate and it has some history. It was more than I could really afford and it was a third car. I didn’t really have space for it and it was an indulgence, and then I decided not to buy it because of the exchange rate. During the first lockdown I took the plunge. When the exchange rate moved in our favour, I thought ‘It’s now or never’ and bought it online without looking at it. I had an independent vehicle examination done in America, which didn’t really tell me anything I didn’t know, and the car was imported by Golden Chariots (goldenchariots.com).”

“IT’S NOT A CAR TO HURRY. ON THE OPEN ROAD, YOU CAN CRUISE AT 70MPH WITH NO HASSLE. I DON’T DARE TO FIND OUT THE TOP SPEED. IT WILL PROBABLY DO ABOUT 90 BUT I’M NOT GOING TO TRY.”

The Chrysler comes with a 323.5cu in straight-eight side valve engine, producing 135bhp. Chrysler’s line contained a plethora of models in the late Forties and the New Yorker was high in the pecking order, hence it had the luxury of eight cylinders, while lesser models made do with six. It featured Chrysler’s Fluid Drive – a type of hydraulic coupling before torque converters were standardised – and a semi-automatic gearbox.

It was originally owned by a physician in Seattle who bought it as his second car. He kept it until 1989 and covered 82,000 miles; today, the mileage stands at 95,000. The swan-neck door mirrors and twin fog lights are desirable optional extras. Its second owner performed a body-on restoration in 1990. Says Peter: “The underside is all original with the factory underseal in remarkable condition, which suggests to me it had just got a bit tatty with age, hence it had new paint and some new upholstery, and the engine, gearbox and brakes were overhauled.” The third owner was the restorer’s son, who gave it to the dealer in 2018 or 2019 through whom Peter bought it. It arrived here in March 2020 and Peter was mildly surprised to find the brakes didn’t work, but the culprit turned out to be one leaky wheel cylinder, so that was easily remedied and the car was ready for the road. However, it spent six months doing not a lot until the DVLA woke up from its lockdown slumber and issued it with a registration in September 2020. 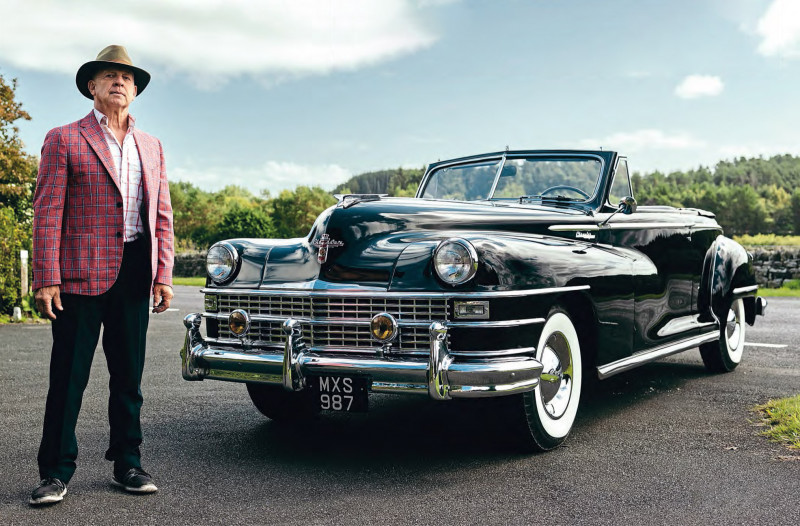 Over the last two years, Peter has made the most of his latest acquisition and he’s formed quite an appreciation for its individual qualities. “You have to learn to use the semiautomatic gearbox,” he begins. “Although it was very popular back in the day in Chryslers, DeSotos and Dodges, when you drive a modern automatic you realise how primitive it is. Having said that, the engine has so much flexibility that it drives beautifully. It’s so smooth and quiet that it goes like a dream. I had a problem with fuel vaporisation when I went to the Rally of the Giants in 2021, which I cured by building quite an elaborate heat shield, which has worked very well. Otherwise, it’s all standard. 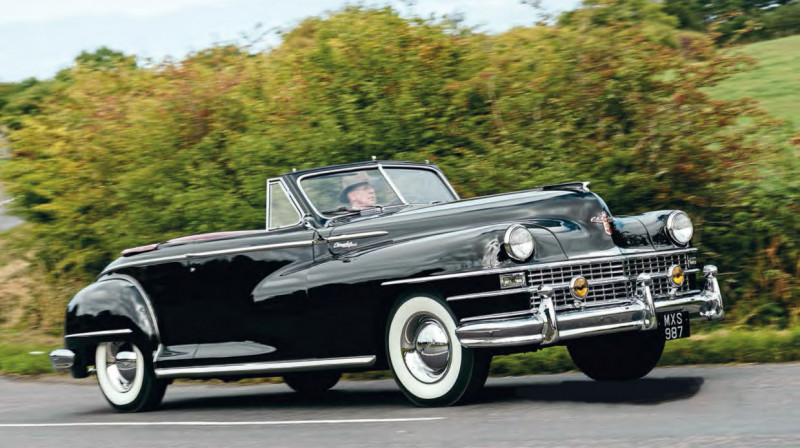 “It’s not a car to hurry. On the open road, you can cruise at 70mph with no hassle. I don’t dare to find out the top speed. It will probably do about 90 but I’m not going to try. Doing 60 with the roof down on a summer’s day is delightful. It’s a handful around town, though, because it’s not responsive. It’s a real land yacht and you have to treat it with respect. Having three cars of the same era, it’s interesting to see how different they are. The ’54 Chrysler has power everything, so it’s much like a modern car. The Buick is somewhere in between; it’s much easier to drive than the New Yorker.” 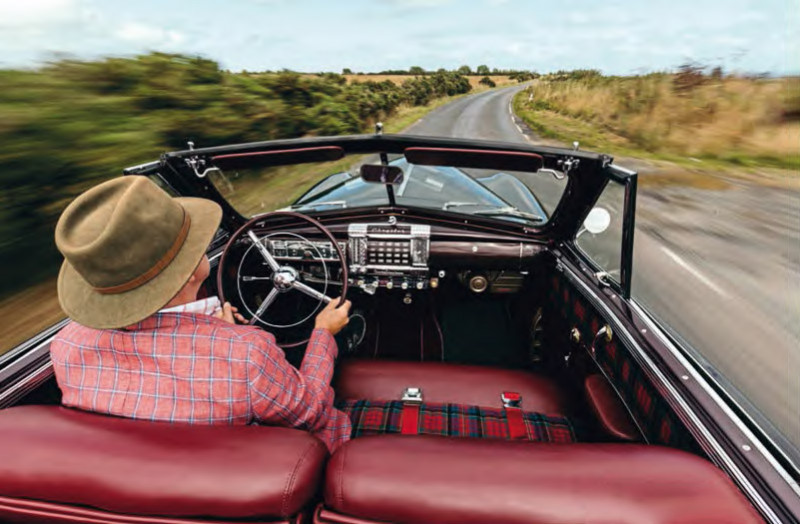 It should be a good car because, with the convertible coupe costing $2815 in 1948, you were paying for quality. Its nearest rival was Buick’s range-topping Roadmaster, but the Buick won a much larger share of the market. Between 1946 and 1949, only the four-door New Yorker sedan sold in reasonably large numbers. Just 3000 convertible coupes found buyers in that time, while the two-door sedan and business coupe only sold a few hundred.

Like the rest of Detroit, Chrysler had little choice but to revive its 1942 models for a few years until the world got back to normal, and increasing prices merely reflected postwar inflation. It might be supposed that Buick was looking to attract younger buyers with its swooping curves, suggestive of speed, whereas the Chrysler’s upright, dignified bearing appealed to more conservative tastes. 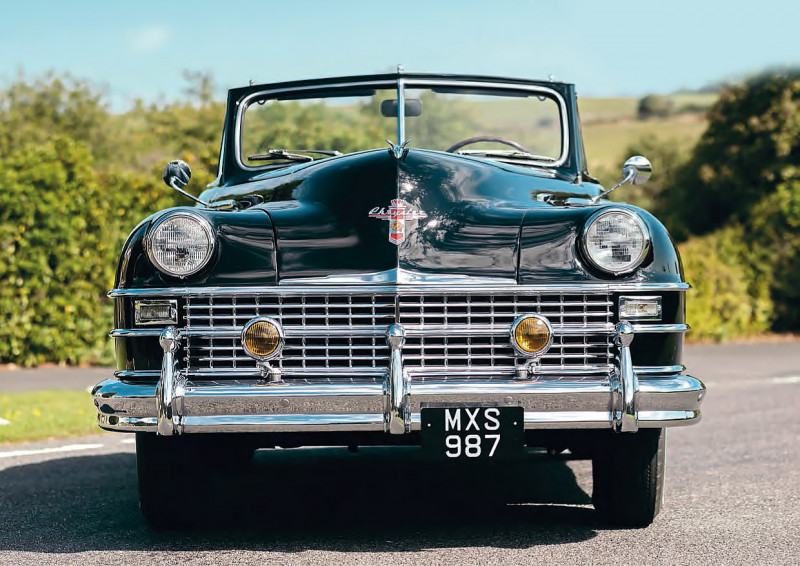 Indeed, the New Yorker made for a very handsome car for the sort of buyer who might want to motor between their job in an upmarket district of town and their detached house in the suburbs, via the country club; it being so well proportioned and displaying just enough chrome to suggest wealth without going overboard. The interior, meanwhile, catered very much for the style-conscious. The painted fascia accessorised with lots of chrome trim was typical for its time, but it was extremely well stocked with a full set of gauges, plus radio, interior lights, heater, cigar lighter, clock and thermometer, which were all standard fitment and all still work. Equally impressive was the upholstery; a popular option was the Highlander tartan trim, very much a Chrysler special. 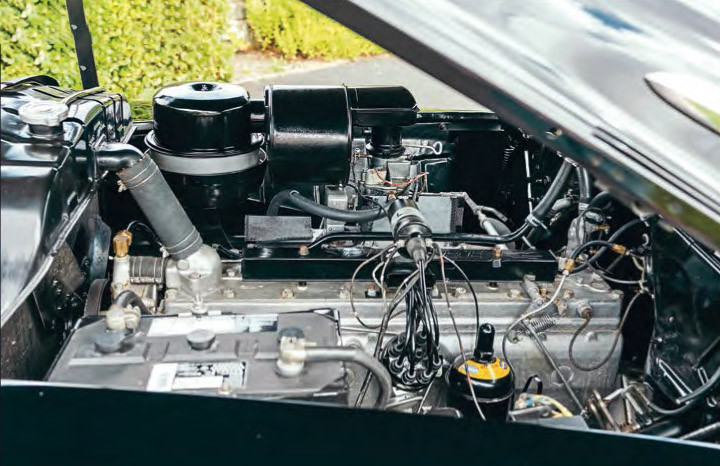 Peter remarks: “It’s just so extravagant and American, Forties style. It turns heads everywhere. People say ‘Wow, was it really like that?’ Well, yes, that’s what they did. It’s very comfortable and luxurious.”

Clearly, these are the words of a satisfied buyer. But to return to that small problem of having three cars and a double garage, we would, like Peter, hate to have to decide which one to sell. Fortunately, this story has a happy ending. Peter, lucky soul that he is, had an endowment policy mature while he was waiting for the Chrysler to get its logbook, and sensibly decided that the money would be best spent turning the double garage into a quadruple one. This means, of course, that he now has one more car-sized space needing to be filled…

He has made up his mind about one thing. Anything he buys in future will have a fixed roof. “If I had my time again,” he says of the New Yorker, “I’d look for a sedan or club coupe. With a convertible, you pay double and get half the practicality, and when you’ve got the hood up it’s like going around in a pram. I don’t regret it, but I wouldn’t have another.”

That doesn’t mean he’s not going to get lots of enjoyment out of it, though. Away from shows, it’s not unlikely that you’ll find him just going for a drive around the North Yorkshire Moors. “I’m not reluctant to use it. If it’s a nice day, I’ll go out in it. It never gets wet, but I’m quite happy just to go to the supermarket or the local garden centre. I feel that its condition is so good and it’s such a rare car that I’d be foolish to let it go, so it’s going to be a keeper.” That’s just the right attitude to have with a survivor car like the New Yorker. I’m not going to tell Peter that he should buy a fourth car, but if another one like this came up for sale, I’m sure we’d all much rather it ended up in his hands than hidden away somewhere where it never turns a wheel…

323.5cu in straight-eight side valve motor. Only the Chrysler Town & Country with its wooden body was seen as a more luxurious model.

Seatbelts are a nod to safety. Luxury: a heater! Big enough for a weekend away. Highlander tartan trim.

Chrysler’s styling is conservative, compared with what was to come the following decade!

Black paint sets off the chrome nicely. New Yorker was one of the top Chrysler models. Fluid Drive was a form of semi-automatic. Fine detail.

Dear Classic American, I just wanted to say how much I enjoyed reading about Peter Rickinson’s 1948 Chrysler New Yorker. These late-Forties Mopars are often overlooked, but in my opinion are some of the most handsome cars of the era, representing as they do, the bridge between cars like the Forties La Salles and Fifties Cadillacs. Elegant, graceful lines, magnificent design and playful, yet tasteful masculine interiors, as illustrated with this example’s ‘Highlander’ tartan interior. I was particularly interested in Mr Rickinson’s description of how the car was to drive. My first car was a Forties Chevrolet, after which I graduated to a Fifties Pontiac and latterly I have a Sixties Buick in my ownership. With each decade the driving experience has improved, as has the reliability and ease of ownership. Having said that, I’m not convinced that the build quality or the quality of materials used has improved with each decade; if anything, the opposite. Jeff Stourton Derby, Derbyshire

Zack Stiling, who wrote the feature, paid special attention to sharing what the driving experience was like with these cars and as such has put together a well-rounded and interesting article that we’re pleased to hear you enjoyed. There may be challenges with running older cars, but there are a lot of benefits too…!