Although the changes between the F-Type 400 Sport and the standard V6 S were subtle, they were enough to make this limited-edition model look and feel significantly different. We’ve tracked down a rare example.

This short-lived special edition used the equally short-lived supercharged V6 and is an intriguing alternative to the V8.

Subtlety may deceive you,” said Oliver Cromwell once. “Integrity never will.” Judging by this F-Type 400 Sport X152, the former Lord Protector wasn’t wrong. Although the car looks little different from the standard V6 S it was based on, the discreet changes to the design together with the 20PS power upgrade were enough to transform the F-Type into an even harder, more authentic performance car. 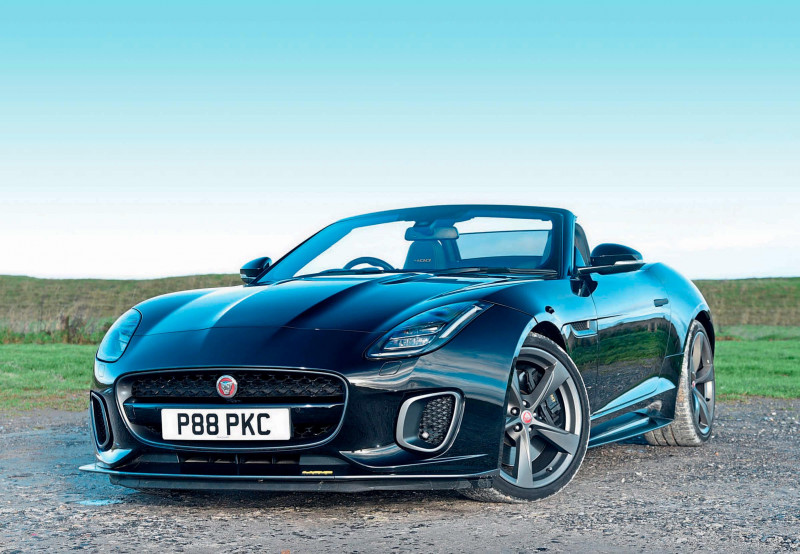 In early 2017 the F-Type received a minor facelift for the 2018 model year that introduced new full LED headlights, dark rear lenses and slimmer seats. “Great sports car design is about proportion and purity,” said Jaguar’s then design director, Ian Callum, at the time. “The most challenging element of the process for designers is to focus on and maintain an exciting silhouette that promises performance. For the 2018 model year F-Type, we looked at how we could fine-tune key details to deliver even more clarity of purpose in the overall design – for the driver, the passenger and onlookers.” 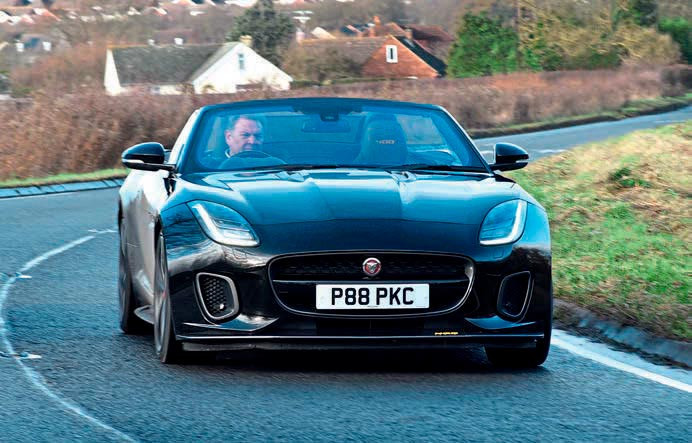 Part of the refresh was a limited-edition model, the 400 Sport, named after the amount of PferdeStarke the supercharged 3-litre V6 engine produced (around 395bhp). Although a mere 20PS over the standard S model (which was found courtesy of a simple engine remap), it was still enough to change the car’s characteristics. “It feels a little brighter in its responses to throttle and steering,” said Evo magazine in 2017, “a little less overpowering in its delivery – think of it as a crisp gin and tonic rather than a pint of stout.” 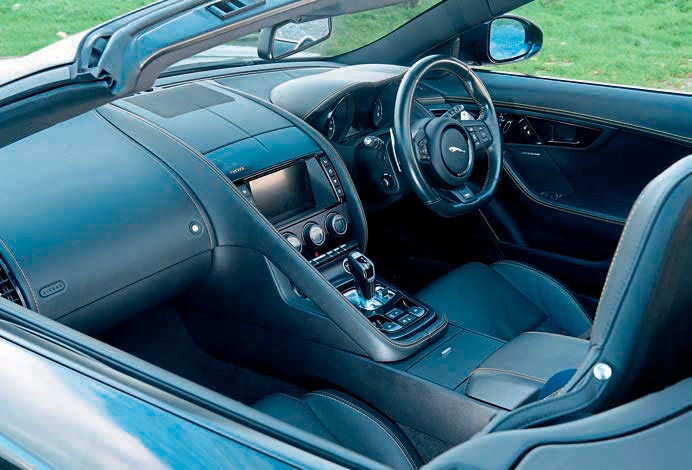 As well as the extra power, the 400 Sport featured an uprated braking system that featured 380mm front and 376mm rear discs and black calipers with the 400 Sport logo. The 400 was distinguished by handsome 20in five-spoke alloy wheels, a front splitter, side sills, rear diffuser and air vents all in a new dark grey satin finish. There was also new front and rear badging in yellow, the colour carried into the interior for the stitching plus badging on the headrests, centre console and new flat-bottomed wheel. Available in open and closed body styles, plus rear and all-wheel drive, the 400 Sport was on sale for around 12 months. By being on average £6000 more than the comparable standard model, only a handful were produced including 440 for the UK, made up of 236 with rear-wheel-drive and 204 AWD models.

This low volume makes the car something of a Jaguar-shaped unicorn yet thanks to the yellow badging, a recognisable one. So, when I spotted Paul Clarke’s Santorini Black convertible that’s featured here (one of just three colours the 400 was available in, the others being Indus Silver and Yulong White) at a Jaguar event last summer, even from a distance, I instantly knew its significance.

Although only the Jaguar cognoscenti would realise the front air dam and side skirts aren’t usually fitted to the V6 models, there’s no denying they give the car more of a muscular appearance than normal. But you don’t need to be an expert to notice the yellow stitching that’s throughout the interior. Although not to everyone’s taste, I like it, thinking it lifts an otherwise dull-looking cabin.

The 3.0-litre bursts into life the moment I press the centre console-located starter button and after pulling the lever down into drive it doesn’t take long for the extra 20PS over the S model to make itself known. Although at 4.8 seconds, the 400 Sport has an identical 0-60mph time as the standard V6 S, it feels more of a hooligan. Ignore what the figures say, the acceleration is definitely faster, harder and more brutal than the 380PS version, its performance close to that of the V8 models.

Yet whereas the 5.0 litres produce a deep, reverberating growl, like all V6 models, what comes from the 400 Sport instead is more of a high-pitched, ear-piercing scream the only ends when the eight-speed automatic gearbox finally changes up.

The transmission can also be controlled using the aluminium paddles mounted at the rear of the steering wheel. As I approach a long corner, a quick pull on the left-hand paddle results in the box instantly changing down. As with all rear-wheel-drive F-Types, the 400 Sport’s grip is excellent, allowing me to push harder through fast bends on this wet, wintry day than most other cars.

The extra 20PS then allows me to accelerate quicker out of the corner than the 380PS model and as the revs quickly rise, I use the right-hand paddle to change up. Although the eight-speed transmission is a fast unit it’s not a smooth one at the limit, the gears banging into place with all the finesse as a bullet leaving the barrel of a gun. Thankfully, the uprated brakes have noticeably added bite to hopefully keep me out of trouble.

Amazingly, rear-wheel-drive convertibles like the example featured here are now almost half their original list price. Admittedly at between £38,000-£45,000 it still makes them more expensive than an F-Type S V6 380PS (or the early 495PS V8 model for that matter) they’re still cheaper than an R yet as mentioned earlier, feel almost as fast. The 400 Sport is a model I’ve wanted to experience since I first read the press release in early 2017. I’m pleased to say, despite the subtlety of the approach taken by Jaguar’s engineers while developing the car, it didn’t disappoint. The aesthetical changes might be minor but thanks to its improved performance, behind the yellow badges and side skirts there’s a noticeable integrity to its performance most other limited editions miss out on.

Thanks to the owner of the car featured here, Paul Clarke

Jaguar’s most recent 3.0-litre V6 – the AJ126 – was developed from the V8 block only with the rear two cylinders missing and reduced bore sizes on the remaining six. Produced at Ford’s Bridgend plant in north Wales, production of the unit came to an end in September 2020 when the factory closed.

Usually more associated with the F-Type, it was still available across the company’s saloon range. But with diesels a more popular choice, some of these V6 models are now relatively rare. One of these was the X351 XJ that first had the option of the supercharged 3.0 in 2012, replacing the normally aspirated V8 5.0. Although only the 340PS version was on offer, with the car being all-aluminium and therefore relatively light for such a large saloon, it was still fast, reaching 60mph in under six seconds. “Bury the throttle and it suddenly wakes up,” I said in the January 2013 issue after trying the car, “hurtling the car forward with genuine enthusiasm.”

Although the V6 petrol was smooth and refined, the sub-30mpg it offered couldn’t rival the 3.0-litre diesel’s 40mpg meaning the XJ 3.0 petrol was never a popular choice when new. If you do find one, expect to pay between £18,000 and £25,000, similar to the diesel’s values.

Yet they’re not as rare as the XE S V6. Only on sale between 2016 and 2017, the 380PS model was produced in tiny numbers. But when I drove an example in late 2017, other than a lack of lowdown torque, I found it to be a fast and highly responsive sports saloon. “Its acceleration is vicious,” I said in the January 2018 issue, “and I’m propelled forward as if riding a hurricane.” I also found the XE V6 to be noseheavy and therefore not as agile as the four-cylinder models, the supercharged 2.0-litre model with 300PS (296bhp) especially. If you can live with this plus the 35mpg and can find one that expect to pay between £18,000 and £25,000.

The F-Type 400 Sport wasn’t the first limited edition Jaguar to feature the name; when the X100- generation of XK8 was facelifted in 2002 which also introduced the 4.2-litre version of the V8, there was a special model to mark the occasion. Based on the supercharged car, the XKR 400 was named after the amount of power the engine now produced and, similar to the F-Type, was only available in three colours – Slate Grey, Platinum and Midnight Black – and wore 20in BBS ‘Montreal’ alloys that were usually a cost extra option.

Inside, the walnut veneer across the dash was replaced with a shiny plastic, universally known as piano black, that did much to update what was already an old-fashioned interior. As the rare brochure for the model says, “An interior designed to be stylish and luxurious – with an undeniable sporting focus.” A mere 100 were produced, split 60/40 between coupes and convertibles, making it one of the rarest production Jaguars from the last two decades.

It’s also one of least recognisable today since unlike other the F-Type 400 Sport, the XKR version wasn’t badged as such.