Can several subtle updates make a MkIX from 1960 more civilised to drive? We find out with a neatly modified example.

A handful of carefully chosen updates makes this stately Fifties saloon easy to live with in modern traffic. 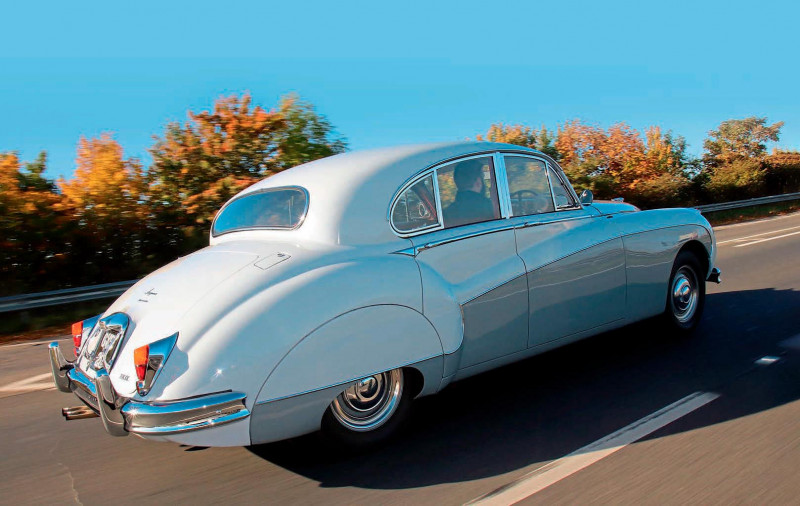 The Jaguar MkIX marked the end of a long line of large, imposing saloons that never looked out of place with a chauffeur behind the steering wheel. These stately vehicles were a match for a Bentley or Rolls-Royce of the time, and although the subsequent MkX was a similarly large, cumbersome machine (and one of Jaguar’s widest), it didn’t offer the same level of perceived grandiosity as its predecessors. 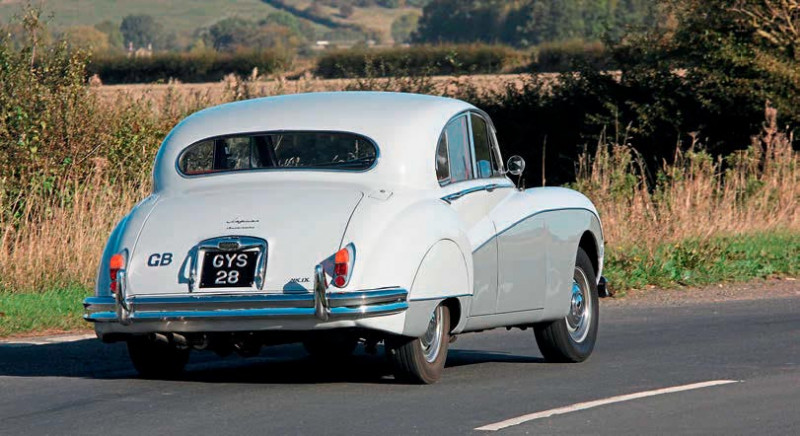 Jaguar’s MkIX arrived in 1959 to replace the MkVIII that had been short-lived, having been introduced in October 1956 as an interim model to run alongside the MkVIIM. Destined to become obsolete, whilst the exterior appearance of all of these models didn’t change too much (the MkVIII saw the introduction of a more prominent radiator grille, one-piece screen and two-tone paintwork), their mechanical components did change and improved with each mark. The MkIX, for instance, was equipped with disc brakes all round, whereas its predecessors had drums. The 220bhp 3.8- litre XK engine was fitted to the MkIX, instead of the MkVIII’s 210bhp 3.4-litre, which only shaved 0.3 seconds off the 0-60mph time at 11.3 seconds but which did increase the top speed by almost 8mph to an impressive 114mph. 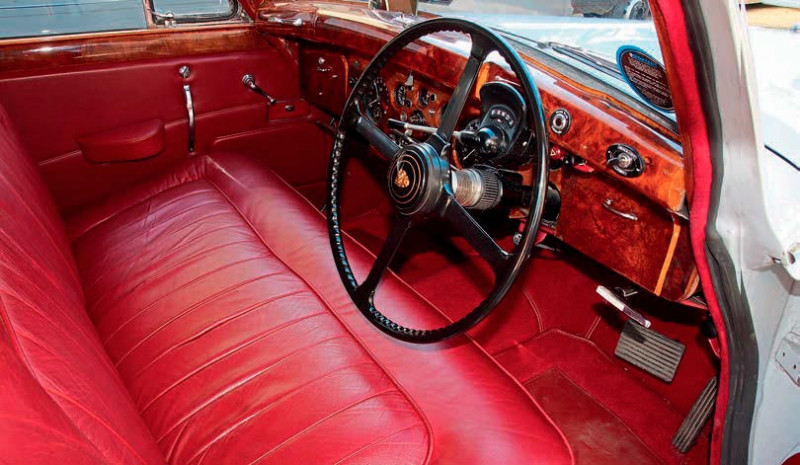 As independent Jaguar specialist Ken Jenkins explains, “The MkVIII is fitted with a B-type cylinder head, the same as the XK150. This head has better porting, 45-degree valve seats and larger exhaust valves which, combined with a twin exhaust increases the power to 210bhp.

The later car was also offered with power-assisted steering, which consisted of a Hobourn Eaton power steering pump which was driven from the back of the dynamo. From lock-to-lock, the steering had to be turned 3.5 times, whereas the MkVIII needed 4.5 turns.

The suspension wasn’t revised on the MkIX, utilising torsion bars and wishbones at the front, and leaf springs at the rear. This dated design was discarded when the MkX appeared in October 1961, which employed a new set of components comprising wishbones, coil springs, dampers and an anti-roll bar at the front and wishbones, radius arms, coil springs and dampers at the rear. The MkX’s components paved the way for a new era at Jaguar, with independent rear suspension, inboard rear brakes and a superior ride quality for models ranging from the E-type to the XJ saloon. 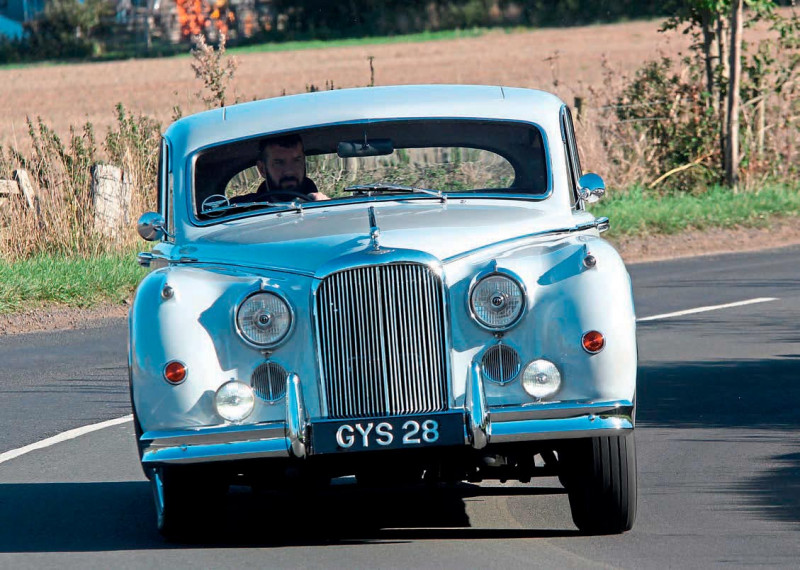 Despite Jaguar in danger of seemingly flogging a dead horse towards the end of the Fifties with the dated looks of the MkIX, the model still represented class with performance. In the same year it was launched, the Mini appeared with a wheezy 848cc engine that produced a meagre 34bhp and would take almost half a minute to reach 60mph. Even the then modern MGA Twin Cam, produced between 1958 and 1960, was only a couple of seconds faster than the MkIX in the 0-60mph dash. So, the MkIX hung on to its laurels for a short time, but nowadays, you have to either appreciate the dated aspects and novelty value of such a challenging drive or hope to find one with a few updates.

There may well be 220bhp at the flywheel of the XK engine, but that results in a power-to- weight ratio of around 125bhp per ton 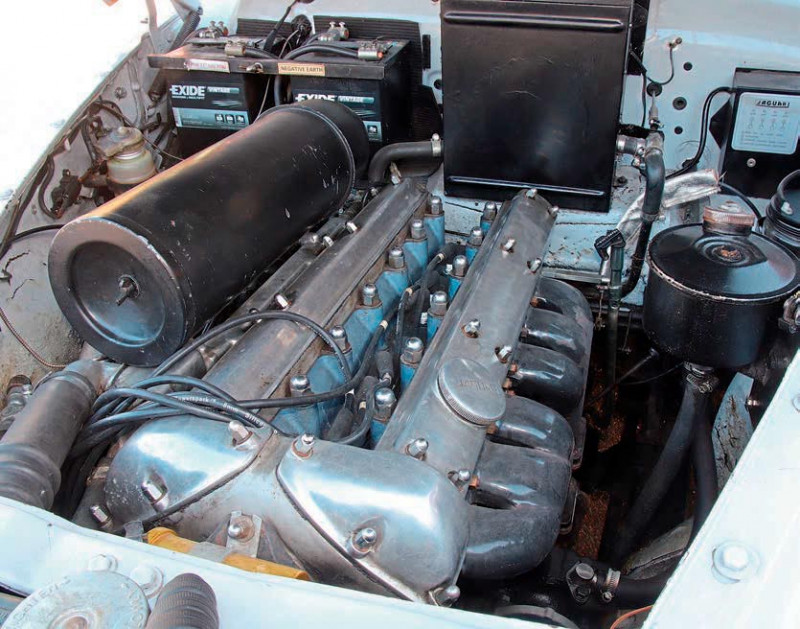 The 1960 MkIX seen here has some subtle updates to help, but are they worth having and do they spoil the original feel of such a classic Jaguar? One aspect of the MkIX that can’t be spoiled is its size. At six feet and one inch wide (roughly 1.83m) and 16ft 4.5” long (that’s just shy of five metres), it’s quite a hefty vehicle in the flesh and more so from behind the steering wheel. And to think the MkX was even larger at nearly 17 feet long (202” or 5.13m) and almost two metres wide at 6ft 4”. Fortunately, all-round visibility when driving wasn’t an afterthought, and only the nearside C-pillar restricts some rearward vision, whereas the view over the bonnet is clear and even the location of the front corners can be judged to help with cornering and parking. The rear isn’t so easy because it drops away so rapidly and cannot be seen through the rearview mirror, door mirrors (both of which are next to useless anyway) or by simply turning around in the driver’s seat and looking out through the rear screen. You have to learn the proportions of this car, particularly at the rear.

The gearbox is one of the biggest features on this particular Jaguar. There’s no BorgWarner DG auto, but instead, a modern ZF four-speed, as fitted to the XJ40, which has overdrive in fourth gear. This was fitted several years ago, after the 3.8-litre XK engine under the bonnet was rebuilt by Ken Jenkins, who still remember working on this particular car. He recalls that the engine’s rotating components were balanced for the rebuild and he’s confident it’s a strong motor with the capability of reaching around 120mph thanks to the gearbox and those engine modifications.

The modern gearbox and revived engine can easily be taken for granted, unless you’ve driven a standard MkIX to compare it with this one. The ease with which this Jaguar sets off, changes between gears and kicks down to accelerate is smooth and refined. Even when parking and having to switch between Drive and Reverse using the steering column-mounted stalk switch, there are no nasty clonks from the drivetrain or surges upon releasing the brake pedal. The MkIX was fitted with a hydraulic line lock, so once the brake pedal has been released, whether Drive or Reverse has been selected, the car doesn’t move until the engine revs are raised using the throttle pedal, and even then, it all feels controllable, especially at slow, manoeuvring speeds. Setting off on an open road is perhaps a little too relaxed, but it means you have to be a bit more assertive on the throttle pedal to get the MkIX moving with a sense of eagerness.

Once on the move, acceleration isn’t exactly breathtaking, but what can you expect from such a large vehicle that weighs roughly 1.75 tons? There may well be 220bhp at the flywheel of the XK engine (or perhaps more with Ken’s modifications), but that results in a power-to- weight ratio of around 125bhp per ton. Where the MkIX excels isn’t under hard acceleration but maintaining speed. Its torquey XK engine and the responsiveness of the gearbox help to ensure a 60mph B-road for instance, can be driven safely at the speed limit, as I discovered along the country lanes nearby to Classic and Sportscar Centre’s North Yorkshire-based location where this MkIX is stored and now for sale.

Equally impressive are the standard brakes, which as mentioned, consist of discs all round. Along with the smoothness of the gearbox that doesn’t push the car along when you release the throttle pedal, I didn’t feel as though I was fighting with the brake pedal when slowing down.

The suspension components remain standard, although Ken recalls setting the front suspension geometry to zero degrees of camber and although it was a dated layout even back in the late 1950s, it’s sufficiently refined and doesn’t produce excessive amounts of body roll under hard cornering. That’s perhaps just as well, since there are no seatbelts fitted and the front and rear bench seats provide no sideways support.

There’s an art to driving a MkIX briskly, involving wedging yourself into the seat using your left foot to push into the carpet with your hands gripping the steering wheel. Passengers meanwhile simply have to grab on to whatever they can find.

Remember though that the MkIX was never intended to be a sports saloon, but a luxurious, stately carriage and inside you’ll find lots of features to reflect this. Rear seat passengers, who were possibly regarded as being more important, have the luxury of two foldable picnic tables mounted in the backs of the front seats, plus a lockable drinks cabinet in the centre. Each door is equipped with an ashtray, and the driver’s door has the most interesting feature, which consists of a fold-down access panel to a toolbox that contains a selection of spanners, a pair of pliers, a handful of bulbs and a screwdriver.

The equipment inside this example appears to be standard in most cases, ranging from the adapted speed hold switch now used as a headlamp flasher and the map reading light, to the sliding sunroof. Perhaps the long and medium wave push-button radio mounted in the middle of the dashboard is a later addition, and the Pioneer speakers that are hidden from view in the dashboard’s lower trim panel are definitely a modern addition.

Subtle updates are what this MkIX is all about, but many are cleverly disguised. In the engine bay, for example, there’s a spin-on oil filter conversion instead of the standard canister design with a removable cartridge. The points and condenser have been replaced with electronic ignition and the two six-volt batteries mounted in the offside rear of the engine bay have a negative earth warning sticker nearby.

The invoices in the car’s history list a Dynalite alternator conversion, which explains why the electrics have been converted from positive to negative earth. Looking inside the engine bay, the standard power steering fluid reservoir can be seen on the nearside inner wing, which is connected to a power steering pump on the nearside of the engine that’s secured to the back of what looks like a standard dynamo, but must be that Dynalite unit. It’s a very neat and tidy installation.

The history of this MkIX begins at Henlys in London, when it was distributed and sold by Peerless Motors in Slough to Venetian Vogue Ltd in Berkshire, having been dispatched on April 28, 1960. Its exterior paintwork was Pearl Grey and the upholstery inside was finished in red leather. Venetian Vogue Ltd had its own private registration plate lined up for the car, which was VV 1000, suggesting it was used for chauffeuring the company’s executives around.

Little is known about the car between the Sixties and late Nineties, other than that it acquired its current registration after it left Venetian Vogue. Despite there being only 70,000 miles on the clock, numerous repairs and refurbishment jobs have been completed under its two former keepers and Classic and Sportscar Centre has known the car for several years.

The gearbox conversion cost over £10,000 (the original gearbox is still with the vehicle) and the XK engine rebuild would have been almost as much. There are receipts for new chromework, a respray, new carpets and some of the upholstery to the tune of almost £40k, so perhaps the car’s current price tag of £39,995 at C&SC is a bit of a bargain. It would almost certainly cost a lot more to restore a tatty MkIX nowadays, let alone to build it to the specification seen here. And that’s the dilemma of many a classic Jaguar: a restoration project is generally always going to be more expensive than finding an example that’s finished and ready to drive away.