Although Jaguar had come close to building a competition version of the F-Type not long after its 2012 debut, apparently working with the Williams F1 team to develop such a model, it never came to fruition. In early 2018 a genuine racer based on the car finally broke cover. But although it was built by Jaguar’s Special Vehicle Operations (SVO) based in Ryton, having been developed for an independent team, Invictus Games Racing, it wasn’t the works effort many had been hoping for.

The project was commissioned and funded by James Holder, the co-founder of British clothing company Superdry. A racing driver himself who competed in the British GT Championship, Holder was apparently inspired by the 2016 Invictus Games held in Orlando. His idea was to create a racing team that would aid the recovery of WIS (wounded, injured and sick) ex-forces personnel through the means of motorsport, including those who would be behind the wheel. 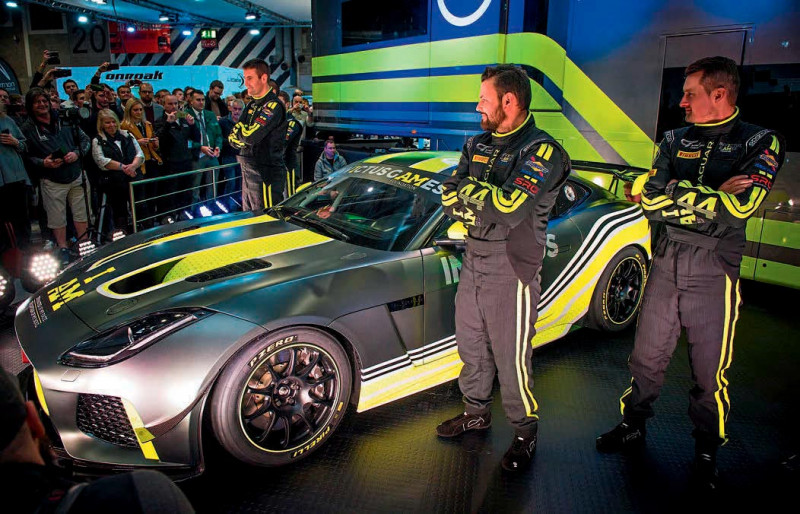 “Our drivers have overcome adversity in the face of injury, shown fierce ambitions in life and possess an incredible drive to succeed,” explained Holder. “They are perfectly suited for this sport which gives them an outlet for their ambitions.”

SVO is said to have brought in motorsport expert, Graham Humphrey, to lead the GT4 project. Having previously being involved with the 1999 Le Mans-winning BMW V12 LMR and the Bentley Continental GT3 in 2013, he had the experience that Jaguar, having not built an in-house competition car since the Sixties, was lacking.

The cars were based on the 200mph F-Type SVR Coupé and built to GT4 specifications. This included optimising the 5.0-litre supercharged V8 for competition use, fitting motorsport-specification brakes, wheels, tyres, suspension and transmission components plus converting the previously all-wheel-drive SVR to rear-wheel drive.

Flanked by the four ex-servicemen who would pilot the two cars, including Paul Vice, Basil Rawlinson, Ben Norfolk and Steve McCulley (who were then mentored by a pair of professionals, Jason Wolfe and Matthew George), a single example was revealed in January 2018 during the Autosport International at the National Exhibitionist Centre, Birmingham (pictured). Resplendent in its dark green and bright yellow livery, the Coupé looked every inch the racer.

“The F-Type SVR was the first series production Jaguar developed by SVO, exemplifying our precision engineering, performance and design capabilities,” said John Edwards, SVO’s then managing director, at the time. “It’s appropriate that this specially-commissioned F-Type SVR will be the first SVO-designed race car to hit the track.”

Two cars competed in the British GT Championship and prepared by motorsport engineering company David Appleby Engineering, that continued to liaise with SVO to ensure they remained competitive. Although 2018 was a steep learning curve with few results, the team showed huge improvement the following year, enjoying several GT4 Pro/Am class victories. The 2019 season would be the Invictus Games Racing’s last and the two cars were sold together by auction the following February for £213,750.

Many commentators – including this magazine – had originally hoped the GT4 would be the springboard Jaguar needed to head back to Le Mans but the project went no further. And with production of the F-Type ending in 2023, it never will.