Curious story of the homegrown 722 GT

When McLaren signed a new deal with Mercedes for 1995, it was undoubtedly the right move for the Formula 1 team, but it put the road-car side of the business in a tricky spot. Gordon Murray’s relationship with BMW went back to his Brabham days, and had been cemented during development of the McLaren F1. Another BMW-powered model was on the drawing board, but Murray knew at once that the Mercedes deal would kill it stone-dead. If Mercedes was powering the Grand Prix team, BMW understandably had no interest in doing likewise with any future road cars. 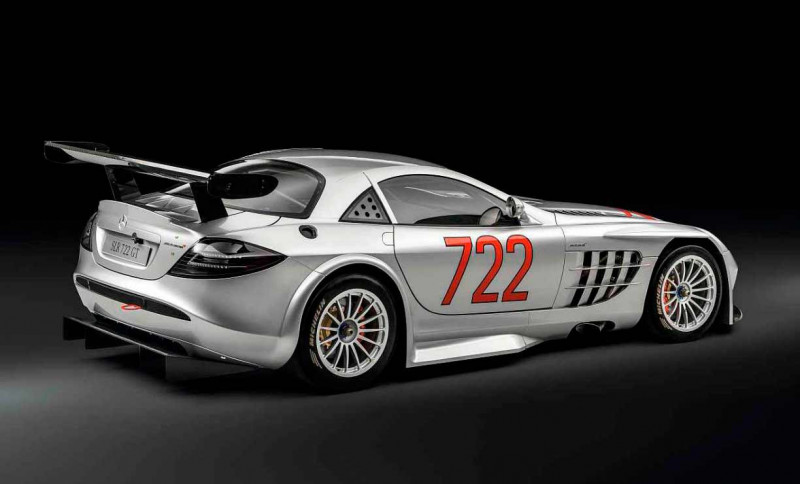 Murray therefore found himself treading water at the end of the 1990s, until eventually his team was given the task of turning the Vision SLR concept into the Mercedes-Benz SLR McLaren. Towards the end of that project, it was decided to create a car that demonstrated what a ‘GTR’ version of the SLR could look like: the show car presented on these pages. It’s now unclear whether the project was instigated by Mercedes or Murray, but Gordon did some drawings, set up his long-time comrade Bruce McIntosh in the old Brabham factory – then occupied by Activa, run by another old friend, Herbie Blash – and left him to it. 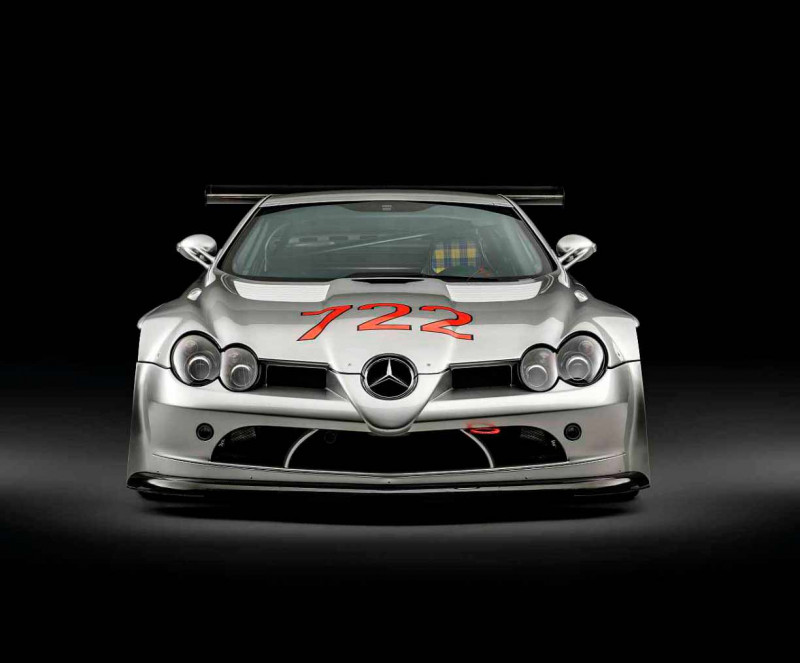 ‘I took two guys down there,’ says McIntosh. ‘The initial instruction that I believe Gordon had from Mercedes was to make a show car that looked racy, but I said to Gordon that we could actually make a runner. We had enough bits from crashed cars because we were doing crash-testing with the SLR at the time. We had a running engine that I’d dragged out of a car and we had suspension that was quite good. It would look complete and I said that we could get it running and making a noise. Gordon said, “Well, we haven’t got a loom and we haven’t got this…” and I said no, it’ll be easy – I’m sure we could do it.

‘I got on with it while Gordon was busy on all the other stuff. I’d go to McLaren and pick up bits. I had an old Astra estate car – I’d chuck some bits in the back and disappear to the Brabham factory. Nobody knew what we were doing and we built it there. 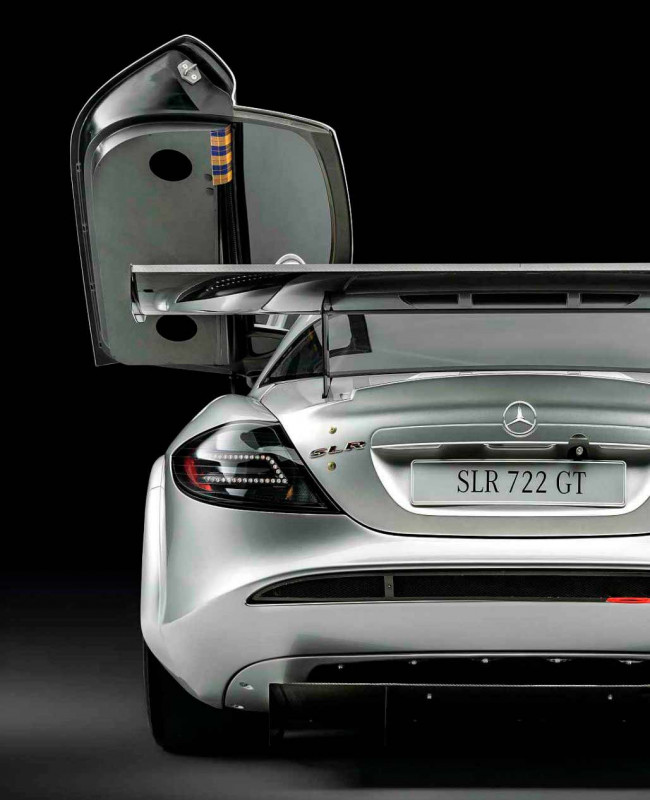 ‘We had bits and pieces kicking around the workshop from when we did the F1 Le Mans car. I knew what was in the store and just took what I wanted. So we’ve got some wide wheels, we’ve got a rear wing off a McLaren LeMans car. I put it together with anything that looked racy. ‘The exhaust system was good. I got an exhaust guy in and he asked what we wanted. I said that we’d like a single exhaust each side and I told him where to do the joins and so forth, and we brought it out the side with a massive six-inch pipe. The noise…I’ve been around racing since I was 16. I left school and went straight into a Formula 1 team. When we started it up, it was just a magic noise – it was the loudest car I’d ever heard. There was some shelving in the workshop at Activa with offcuts of 18-gauge mild steel and bits of aluminium on it. When we fired it up, it vibrated the steel off the shelf and all the dust came out of the rafters. It was an awesome sound.

‘I think I had six or eight weeks to do it, and I did it in time and in budget. Well inside it, in fact, because I knew what was hidden under benches or on crashed cars. Stuff that was deemed to be useless, I resurrected. It was my idea to call it 722 as well, because I thought we’d bring a bit of history into it. With the colour, and the red with the black line round it for the numbers, it looked bloody smart when it was done.’ As it turned out, McIntosh had done too good a job: ‘Ron [Dennis] came to the Brabham factory, probably with a Mercedes guy, and Gordon was there. They looked at it and they were going to put it on show with the SLR road car when it came out, but Ron said, “No, it’ll take the limelight off the thing we’re trying to sell. ”That’s why it didn’t get shown at the time.’ 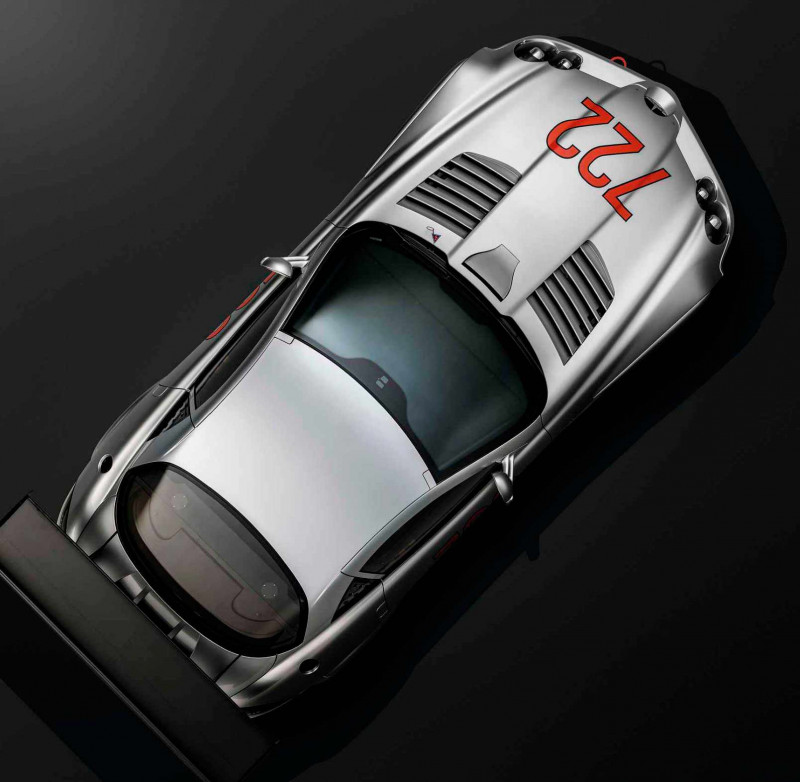 McIntosh refers to the car as ‘very much a running showpiece’ and says that he wouldn’t have wanted to use it in anger. By early 2007, however, the idea of a race-spec SLR had been resurrected bymembers of the owners-only SLR.CLUB. By then, McIntosh had moved on – following Gordon Murray when he left McLaren to set up his own company – and Ray Mallock Ltd (RML) was given the job of turning the luxuriously appointed road car into a convincing track weapon. RML had built a strong reputation for converting road cars into racers, and also had a long and successful history with sports cars. When it came to the 722 GT, Chris Goodwin and Ray Mallock’s son Michael – at that time a professional racer – did the majority of the development driving. Michael recalls seeing McIntosh’s concept but, other than providing inspiration, there was zero carry-over.

RML had the first car running by September 2007, having stripped the donor vehicle and thrown away so many luxury accoutrements that the total weight saving was in the region of 400kg. In fact, not much of the road car remained. RML fitted a new electrical system, cooling package, fuel system, oil system, interior, front suspension and brakes, and worked closely with Michelin to get the correct specification of slick tyre with which to cover the wider OZ wheels.

The safety systems were to FIA GT3 regulations, while the all-new – all-carbon – bodywork was developed using a combination of wind- tunnel testing and straight-line running at MIRA. While the powertrain remained largely standard, output from the 5.4-litre V8 was boosted from 626bhp to 680bhp, and an uprated differential was fitted. A major undertaking, then, but the intention was never for the 722 GT to lock horns with the likes of Aston Martin and Chevrolet in the GT class of international motorsport. Instead, it would run in the SLR.CLUB Trophy, a series of one-make races in which amateur owners would compete alongside professional drivers. Paul Ricard, Monza, Spa-Francorchamps, the Nürburgring and the Salzburgring were on the calendar, and all the owner had to do – once they’d bought the car – was turn up, get in, and let RML take care of everything else. A permanent base was maintained at Paul Ricard, should they decide to drop in and do some testing or enjoy a track-day with friends.

The professional ranks included the likes of Bruno Senna, Jean Alesi and Klaus Ludwig, while Michael Mallock was retained by Mercedes and took his place alongside them.

‘It was a big old beast,’Mallock recalls, ‘but it was surprisingly good fun on track. It was easy to extract performance from and was developed to be very placid so the gentlemen drivers would be comfortable in it – that was the main purpose of the series. It was well balanced, it had a decent amount of downforce – although not enough for Jean Alesi. When we raced at Spa, he came in after first free practice and said, “I can’t take Blanchimont flat. ”That’s because it’s not an F1 car, Jean…’

There was one thing the RML car shared with McIntosh’s concept: the noise. At the time, RML was also running Chevrolets in the World Touring Car Championship and, when it tested both cars at Estoril, the 722 GT completely drowned out the noise of the Chevrolet.

‘We did some testing into the night, somewhere in southern Spain,’ adds Mallock. ‘I finished my stint at 11 o’clock or so and then went down the road to a local petrol station to get something. I could still hear the car from a few miles away.’

A development plan that started towards the end of 2008 involved fitting an X-trac sequential gearbox in place of the standard five-speed auto. Mallock drove a 722 GT so equipped in the last race of the series at Paul Ricard and reported that it transformed the car. It was so much faster, in fact, that he had to stop on one corner and wait ten seconds for the field to catch up.

The 2009 series was all set to include Phillip Island and Laguna Seca, and there were plans to develop a 722 GT for the Nürburgring 24 Hours, but sadly they came to nothing. The problem was finding enough buyers. The intention had been to build a maximum of 21 cars, but in the end only 13were produced – a global financial meltdown not offering the ideal conditions in which to sustain such a venture. The 2008 season was the only one in which the SLR.CLUB Trophy was held, and Mercedes had to buy back some of the cars from disgruntled owners. Not all were mothballed, though. One went to the US and was used in SCCA events, for which it had to run on treaded tyres.

So, how do you sum up the 722 GT? Not even the most hardened devotee could argue that the SLR.CLUB Trophy carries with it the same cachet as Le Mans or Sebring, and chassis number nine failed to sell when it turned up at auction in August 2020 with a lower estimate of €700,000. No doubt its profile would have been raised had the programme lasted long enough to include a Nürburgring 24 Hours campaign, but for now the 722 GT occupies a slightly awkward spot between track-only hypercars such as the Ferrari FXX and thoroughbred racers such as the Aston Martin DBR9.

The impact of Bruce McIntosh’s original 722 concept has not diminished, however. Later this year, McLaren Special Operations will reveal a track-focused roadster version of the SLR, dubbed the HDK, that is said to have been inspired by the show car. Only 12 will be made and most have already been sold. In one way, at least, the 722 GT story may yet have a happier ending.

‘WHEN WE STARTED IT UP, IT WAS JUST A MAGIC NOISE – THE LOUDEST CAR I’D EVER HEARD’ BRUCE McINTOSH

Clockwise, from right Show car’s bodywork would be redesigned for production racers; power eventually boosted from 626bhp to 680bhp; Tartan seat trim an obvious nod to the Moss/Jenks Mille Miglia racer; cockpit looks authentic, even though this was effectively just a mock-up.