REACH FOR THE STARS

The 300SL Gullwing is a true Mercedes legend while its modern counterpart, the mighty SLS AMG, is a modern icon. We take a look at these two magnificent machines and the relationship between them.

The doors. You can’t help but love the doors. Lifted high above their rooflines, they kink and strut like proud wings. Down below, they’re bolted to a pair of Mercedes’ most magnificent road cars. One’s a voluptuous classic beauty, the other hums with new-age menace. They’re very different beasts, but the 300 SL and SLS AMG share more in common with one another than you might imagine. It starts with those magnificent gullwings. 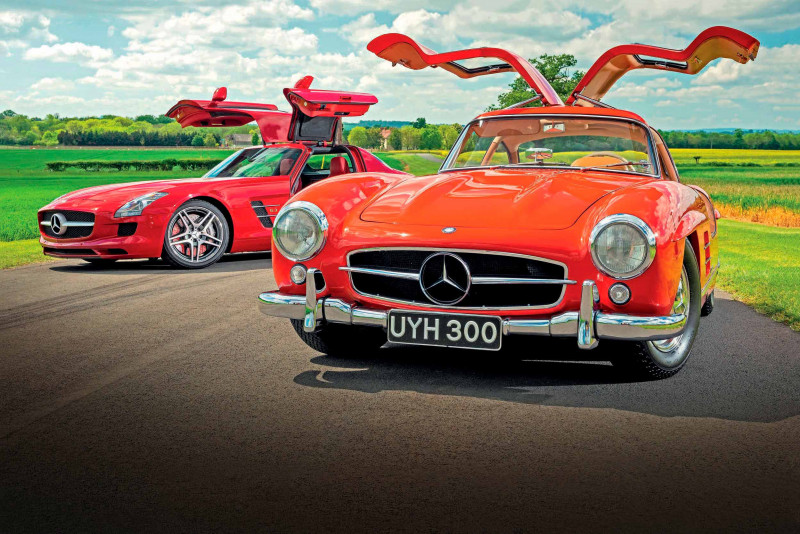 A world-first for a production car, the distinctive doors set auto shows ablaze upon the 300’s debut in 1954, yet the origin of the design drips with practicality. Two years earlier, Mercedes had created the W194 sports racer when it mated the 3.0-litre straight-six from its 300 road car with an aluminium space frame. There simply wasn’t enough room for traditional doors. Instead, the new car’s lofty chassis rails encouraged the innovative gullwing solution. The finished SL competition car had style, but that didn’t matter to Benz. Victories in the 24 Hours of Le Mans and Mexico’s brutal Carrera Panamericana road race gave the manufacturer everything it needed from the 300 project and, without a little outside influence, the story may have ended there were it not for Max Hoffman.

A New York-based importer of anything European and fast, the automotive-obsessed Austrian was convinced a road-going SL would meet with riotous success in America. In fact, he was so sure of the new sports machine’s potential to become a Stateside smash hit, he placed an order for 1000 300 SLs in readiness for the model’s launch at 1954’s New York Auto Show. An icon was born and, even today, the 300 SL has the specification to match its outlandish looks. Standard Bosch mechanical fuel injection lifts the 3.0-litre straight-six to 215hp, an aluminium boot and bonnet keep weight down, the tilting steering wheel makes it easier to jump straight in and it’s all underpinned by a development of the W194’s light, strong tubular chassis.

Five decades on, Mercedes still uses space frame construction, but it comes with a spaceage twist. The SLS AMG chassis is all aluminium and the structure uses casting in high-stress areas, complete with directional ribbing further increasing strength. Building on its predecessor’s partial alloy body, the AMG also employs aluminium bodywork throughout. Another continuation sits out of sight: the 300 SL in our pictures was ordered new with belly pans, an optional aerodynamic device that smooths out airflow, while the SLS features a covered underfloor with a lift-cancelling rear diffuser.

That might sound racy, but the 21st century Gullwing didn’t tread the 300’s path from road to track. Instead, Mercedes developed a competition version of the SLS following the standard car’s release. Competing in the cut-throat GT3 category, the AMG took its first race win in 2011 and soon backed that up with top honours in the 2012 FIA GT3 European Championship. Long-distance racing proved an even happier hunting ground: Belgium’s Spa 24 Hours, Australia’s Bathurst 12 Hours and the iconic 24 Hours of Nürburgring all fell to the SLS. A starring role in Formula One also kept the grand tourer in the public eye thanks to the V8 acting as thunderous safety car between 2010 and 2014.

We’re getting ahead of ourselves. Back on the road, the SLS wows drivers with its mechanical sophistication. Echoing the 300 SL and its inline-six, the AMG produces class-leading power – think 571bhp and 479lb-ft – from an ambitious development of a pre-existing Mercedes engine. Classified as the M159, the SLS motor takes its fundamentals from the M156, as used in contemporary AMG 63 models, adding a unique intake, bespoke tubular exhaust manifolds, a dry-sump system, reworked valvetrain and revised camshaft profiles.

Mercedes’ hard work doesn’t stop there. A solid torque tube forms a robust connection between the engine and the seven-speed dual-clutch transmission, itself mounted in a rear transaxle arrangement to ensure balanced weight distribution from front to rear. Light yet exceptionally strong, a carbon fibre propshaft completes the construction. Forged alloy wheels, advanced launch control and double wishbone suspension add to the appeal.

It’s all wrapped in an undeniably retro style. Penned by British designer, Mark Fetherston, the SLS first hit sketchpads in the mid-2000s and repurposes the 300’s design language for the modern age. Gone are the slow curves, shimmering chrome and heavy, shallow wheel arches of the 1950s. In are cool and crisp angles coupled with LED lighting. The 1954 SL W198 still provides plenty of inspiration, however. Take a look at the wide front grille, the pronounced side vents and the bonnet’s subtle flow. Most importantly, the gullwing doors are present. They’re not a necessity – Mercedes even had to pack the hinges with explosives to meet modern crash safety concerns – but they do create a stylish motif that carries through the ages.

Our SL pair crackle with this visual synergy. Built in 1954 and 2010 respectively, both represent the first and purest interpretations of their aesthetic concepts. The 300 would later morph into the SL Roadster, complete with conventional doors and full-height headlamps, and the SLS story would culminate in the harshedged, carbon-flecked Black Series, yet the red pair pictured here offer something simpler. They may be 56 years apart, but they both struck their owners with simple, intoxicating style.

These gorgeous Gullwings have seen wildly divergent lives. The SLS wears only 689 miles and has been appreciated like a piece of fine artwork. The designo twin-tone leather doesn’t show a single crease, let alone a nick or scratch, while the paintwork pops with a complex sheen uninterrupted by stone chips or swirl marks. As a Le Mans Red example, this SLS also boasts the same hue used for the model’s press and advertising debuts. Covering more than a 100 times the distance experienced by its grandson, this 300 SL is almost 80,000km into its automotive adventure and strikes a very different note.

Smouldering in a warm orange-red (a legacy of an early life in the United States of America), the left-hooker wears its age and regular use with grace, with its owner having taken it on visits to Le Mans and wider European jaunts, as well as The Ecurie Ecosse Tour, a multi-day Scottish road trip, which both car and driver have participated in no fewer than a dozen times. While the SL wears huge collector value, its mechanical condition further rewards an enthusiastic driver. An electric power steering conversion, stainless steel exhaust and uprated camshaft all stray from standard specification, while both the gearbox and braking system have been recently rebuilt.

Despite its newcomer status, the SLS is just as seductive from behind the wheel. Displacing 6.2-litres and hollering at anyone who cares to hear, it’s the engine which sets an SLS apart; forced induction and hybrid assistance have swept the Mercedes product line since the model’s introduction, further ensuring the brutish, naturally-aspirated V8 secures the AMG’s future as a modern classic.

Both the 300 SL and SLS AMG are very special machines: equally stunning and equally significant in terms of their part in Mercedes history. While they might be separated by more than half a century, the passion that created them and the DNA they share makes them forever connected with one another.

THE DOORS. YOU CAN’T HELP BUT LOVE THE DOORS. LIFTED HIGH ABOVE THEIR ROOFLINES, THEY KINK AND STRUT LIKE PROUD WINGS. DOWN BELOW, THEY’RE BOLTED TO A PAIR OF MERCEDES’ MOST MAGNIFICENT ROAD CARS