Tuning is all about standing out — and this 620bhp MKB E55 AMG is the only example of its kind on British roads...Words Emma Woodcock. Photos Dan Sherwood.

THE ONE AND ONLY

As impressive as the stock W211 E55 is there’s always room for improvement and not only is this MKB-tuned monster making 620bhp, it’s also the only one in the UK.

Silver Mercedes-Benz E-Class. It’s not an inaccurate description, but it misses all the captivating detail. Four pipes and aggressive styling point to an AMG, the split-spoke snowflakes (borrowed from a CLS63 AMG) point to aftermarket tuning, the body kit confirms it. The front bumper wears a jutting, twin-level front spoiler and four fog lights, the side skirts hang lower than Mercedes ever planned and the rear apron drops deep past the quad tailpipes. Converted by German marque specialist, MKB, and developed with stability above 160mph in mind, you’re looking at one of the most extreme interpretations of the E55 AMG.

That’s not to say a stock W211 AMG won’t stand out. Even today, against a backdrop of 600bhp contemporaries, the E55 makes a compelling case for itself. Producing 476hp and 516lb ft torque, the V8 four-door reaches 60mph in 4.6 seconds and thunders past 180mph, given enough space and the removal of the standard 155mph electronic speed limiter. Upon its 2002 launch, those figures were enough to cause a sensation – it’s worth noting the E39-generation BMW M5 lags almost 80 horsepower behind the Mercedes, while even the all-wheel-drive Audi C5 RS6 hasn’t the straight-line performance to keep up.

TOBY SMALES IS IN EXACTLY THAT ENVIABLE POSITION. OWNER OF THE ONLY MKB-MODIFIED STAGE 3 E55 AMG IN THE UK, HE’S GOT 620HP AND 590LB FT OF TORQUE UNDER HIS RIGHT FOOT

Aftermarket tuners soon spotted potential in the eight-cylinder saloon and its unstressed supercharger. Modification packages hit the market within a year of the model’s introduction, with changes ranging from mild ECU remaps to comprehensive rebuilds featuring fresh engine internals, enlarged throttle bodies and reimagined exhausts. The most extreme cars, like the MKB in our photographs, hammers past 600hp with ease, but the M113K V8 is very responsive to upgrades. 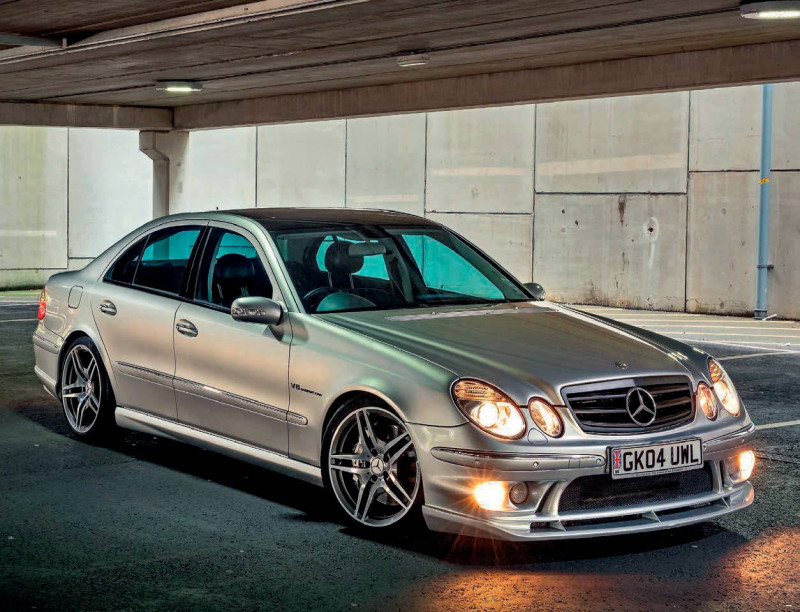 Even a selection of basic modifications, comprising a smaller supercharger pulley, an ECU remap to suit and some cooling enhancements can yield around 540hp. Once the preserve of the well-heeled, the twin winds of time and depreciation now place the E55 AMG in front of a far wider audience. Careful searching can deliver privately offered, high mileage cars below £10k, while a budget of £15k allows access to a range of lightly used examples. New keepers can also avail themselves of the tuning scene which helped to secure the model’s reputation: established names like Kleeman, RENNtech and MKB itself all continue to support the 5.4-litre supercharged V8 that powers this generation of 55-badged AMG models. Best of all, there are changes to suit all tastes and budgets. A range of smaller providers stock everything from larger, louder exhaust systems to suspension lowering modules, while Quaife’s torque-biasing limitedslip differential is a popular swap for owners chasing enhanced traction.

THE CAR ALSO BENEFITS FROM A STRENGTHENED TRANSMISSION, A MULTI-DISC LIMITED-SLIP DIFFERENTIAL WITH A 45% LOCK-UP, A REMAPPED GEARBOX CONTROL UNIT AND A SHORTER FINAL DRIVE

Buyers with patience, discernment and plenty of luck can take a different route. Period tuning projects occasionally present themselves as available for purchase and, when they do, new owners with the knowledge and research abilities to understand these machines find themselves behind the wheel of some of the rarest, fastest machines in Mercedes history. Toby Smales is in exactly that enviable position. Owner of the only MKB-modified Stage 3 E55 AMG in the UK, he’s got 620hp and 590lb ft of torque under his right foot and can’t pull into a petrol station without turning heads. MKB isn’t a well-known name in Britain. It’s not even the most famous three-letter acronym affixed to the Mercedes marque, and yet, the Winnenden firm has more than enough provenance to back up its reputation for extracting lofty power figures from Mercedes engines. The ‘M’ stands for the surname of company co-founder, Erhard Melcher, a renowned automotive engineer whose initial also appears in AMG. 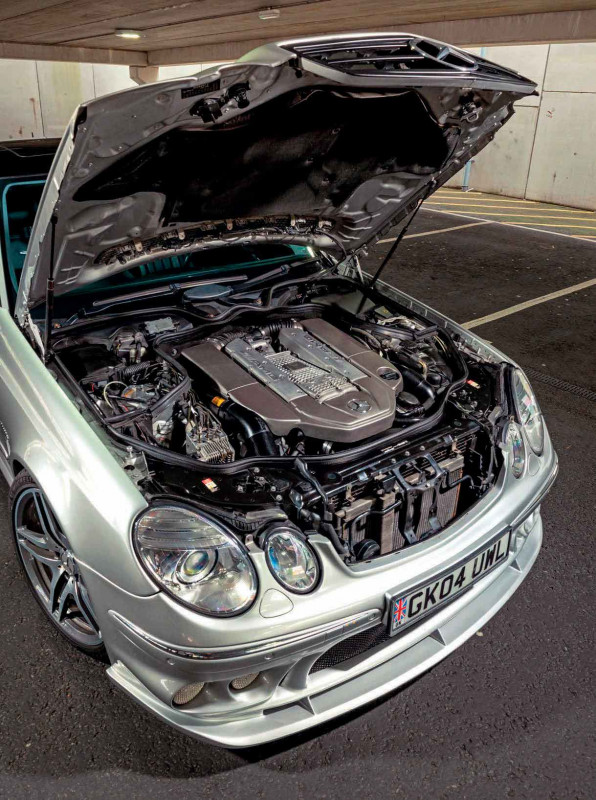 Yes, you read that correctly. Mr Melcher was one of the founders of AMG Engine Production and Development. Away from Affalterbach and under the stewardship of current owner, Panagiotis Avramidis, MKB has redoubled its marque focus and offers both performance and aesthetic improvements for the entire Mercedes- Benz product line.

Shock and awe has always been an MKB trademark. The company’s history is peppered with range-toppers which still impress today. MKB can push the C216 CL65 AMG past 750hp, has stretched its skills by dropping a twin-turbocharged V12 into an early GL500 SUV and punched its SL65 AMG Black Series conversion to 1000hp and a massive 959lb ft of torque.

The firm’s W211 E55 AMG conversions don’t quite reach those mind-boggling heights, but we’ll happily bet no owners have ever left MKB feeling short-changed. Even the firm’s Stage 1 offering for the stonking saloon brings power up to 540hp and 542lb ft of torque. Stage 2 (a bundle adding new air filters, stainless steel exhaust manifolds and aggressive camshafts) pushes those numbers to 595hp and 564lb ft. Bolster those changes with an MKB supercharger pulley, clutch and an enlarged throttle assembly and the E55 reaches the 620hp of Stage 3. Fitted to an E55 AMG estate, the full conversion yielded a solid 201.2mph at the Nardo test track in southern Italy. European buyers could go no further, but MKB wasn’t done. Freed from the constraints of EU emissions legislation, the company went all out to develop the 55/8K final stage. 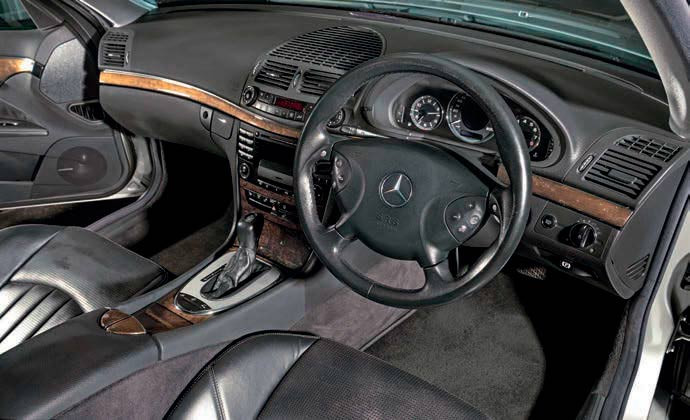 Further engine upgrades include increased supercharger boost, larger intake and exhaust valves, not to mention the optional removal of catalytic converters. Strengthened by a forged crankshaft, forged pistons and titanium connecting rods, the result is a reliable 680hp and 664lb ft of torque. Not that Toby is left wanting with his setup. From the moment he first set eyes on his MKB-modified E55, he’s been entranced by its combination of animal performance and jaw-dropping style. “The car was sitting outside my place of work,” he remembers. “It looked totally unreal.” A PalmerSport circuit driving instructor and competitor in the BRSCC Toyo Tires Porsche Championship for independent marque specialist, PIE Performance, Toby has taken all manner of supercars and track day specials to their outer limits, yet the MKB instantly rendered him spellbound. “It’s one of the fastest cars I’ve ever been in charge of,” he smiles. “By the time I’d driven it to the next village and back, I was totally sold. I’ve spent time behind the wheel of various Ferraris, Maseratis, Lamborghinis and more, but this MKB is easily a performance equal.”

As a full MKB conversion, his E55 doesn’t just derive its extra performance from the sledgehammer up front. The car also benefits from a strengthened transmission, a multi-disc limited-slip differential with a 45% lock-up, a remapped gearbox control unit and a shorter final drive. Running a ratio of 2.82:1, the back axle is far punchier than the stock Mercedes 2.65:1 item, aiding the engine in its drive for breathtaking acceleration.

Of course, all that performance has to find its way to the ground. This is where Toby’s car steps away from the MKB storm. Where the German tuners generally fit a sports lowering kit working with original air suspension to drop ride height, this E55 wears KW Variant 2 coilovers. Manually adjustable for both height and rebound settings, the setup offers a big improvement in handling over the Airmatic suspension. “The previous owner perfectly configured the system,” says Toby. “It’s stiff enough for the track, but retains a nice balance between cruising and performance.” High performance Michelin Pilot Sport 4S tyres provide the traction to match. “This E55 will still happily spin its wheels up to third gear from a standing start, but with a more progressive throttle application, the new rubber makes a huge difference,” Toby tells us.

That’s just as well. Ever since Toby convinced his car’s previous owner (one of his racing sponsors) to part with its keys, the MKB has seen action at every opportunity. “I drive my E55 an hour to work each day. It’s clearly a luxury car built for long-distance cruising,” he explains, “but then you put your foot down and the world lights up. The supercharger is ready to attack with instant response, ensuring the car annihilates anything else on the road. The engine keeps pulling and pulling all the way past 160mph.” There’s a soundtrack to match, too, thanks to the presence of an MKB stainless steel exhaust system. “There’s a low rumble when you’re cruising, but hit the gas and the noise explodes. It’s like having an angry tiger in the back of the car. I’m constantly being asked to light up the rears!”

Toby won’t abandon his fast four-door any time soon. A road trip to Lake Garda and plenty of on-track activity is on the cards, while even daily driving gives him the chance to enjoy the car’s unicorn status. “People are always making comments,” he grins. “The sound is definitely a major attraction. It’s lovely knowing I’m the only person in the country with a car built to this specification. I consider myself very lucky.” From the bold bodywork to those 620 ponies, there really is nothing else like this aweinspiring AMG.