TV and film lighting expert John Gates talks to Reed Hitchcock about his 1986 560SL that he’s made the very most of driving during the last 13 years. Words Reed Hitchcock. Images Kaveh Sardari.

Star shining bright Lighting guru John Gates reveals why he spent the last 150,000 miles in the seat of his R107 560SL

John Gates is a man with an amazing eye – and he should be, considering that he spent a career as a lighting guru for the motion picture and television industries. John has worked on projects with household names like Danny DeVito, Jeff Bridges and Tommy Lee Jones, but he doesn’t have the aura of someone overly impressed with celebrity – more like he knows where the bodies are buried. Instead, in conversation his passion for the detail aspects of his life’s work is tangible. It seems somehow appropriate to me that a man with an eye for colour, light and composition has owned this aesthetically pleasing, Mariner Blue 1986 560SL for 13 years and over 150,000 miles. 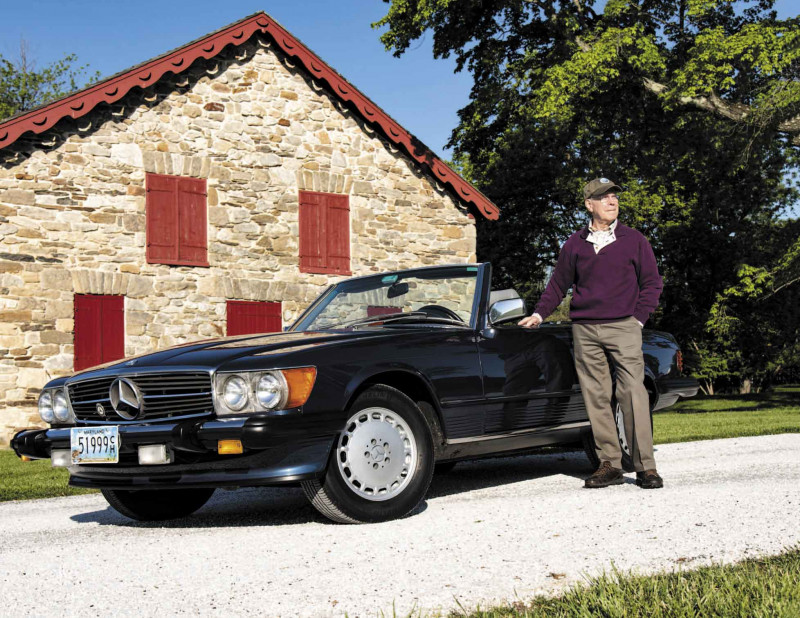 Classic Mercedes-Benzes have not been a staple of John’s garage since he first started driving. In fact, he was more of the practical Honda owner type for much of his driving life, but he had an appreciation for Mercedes’ reputation for over-engineering. It likely didn’t escape his attention that for nearly two full decades the venerable R107 was also the ‘it’ car among Hollywood’s elite. Just think about it for a minute: The Six Million Dollar Man and Wonder Woman drove 107s, so did Jonathan Hart and Bobby Ewing. A few years later, a 107 featured prominently in Beverly Hills Cop – even featuring on the movie poster. For the entire 18-year production from 1971 through 1989, there was no two-seater that compared to the 107 – in all, eight in-line six and V8 configurations – in terms of quality, presence, prominence and exclusivity. 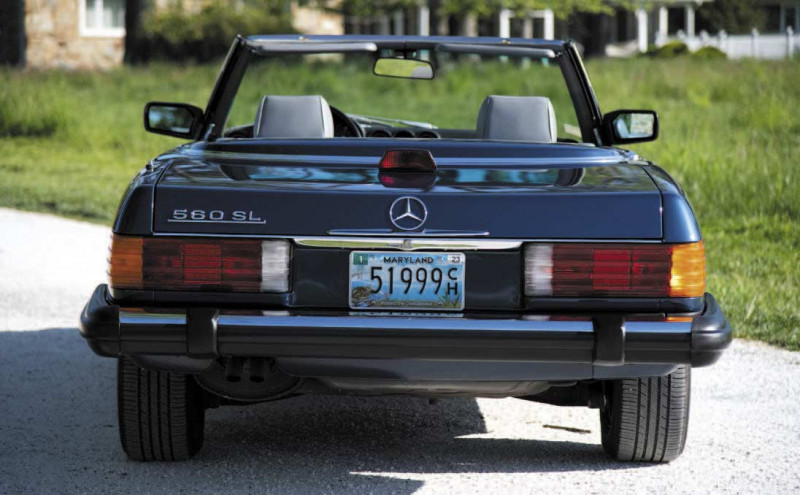 Actually, exclusivity in this case is a bit of a misnomer. They were exclusive in that only well-heeled buyers could afford them, but in total Mercedes built a remarkable 237,287 R107s – or almost five times the number of 113-chassis ‘Pagoda’ SLs that preceded them. John’s 560SL is one of 13,788 of that model produced for worldwide consumption in 1986: nothing to sneeze at, but not quite Toyota Corolla numbers, either.

So, while 560SLs are not particularly hard to come by, at least here in the good old US of A, which was their primary market, when he set about looking for one circa 2007 John wasn’t looking for just any car. He’d already had the epiphany that “for the same money as a new Honda I could buy a pristine classic Mercedes”, but that was only the first step. A lot of 560SLs – even 13 years ago – had seen better days. Unfortunately, like many eventual classics, even R107s went through a “just a used car” period, and many buyers got into them cheap, drove them hard, and then parked them in the corner when expensive bits broke. 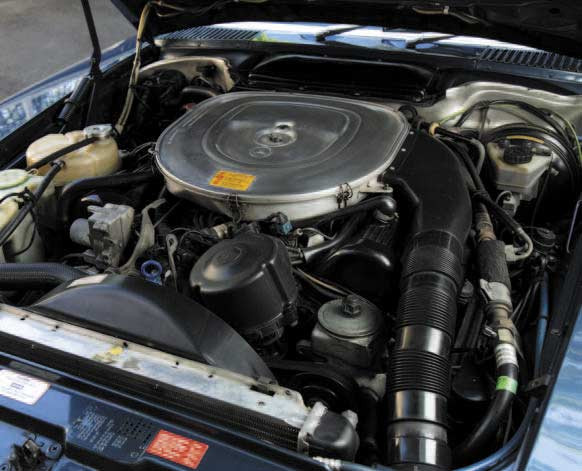 For years, there was discussion among the Mercedes enthusiast community about R107s as collectible classics. While there were always true believers and cars that had been hermetically sealed and not driven past delivery miles that commanded a hefty premium when they came to market, it really wasn’t until Pagoda prices started trending upwards at a surprising pace that the R107s started coming into their own. Seemingly overnight, all 107s – from the fight pigs to the garage queens – were a “rare, pristine collector car” with premium prices affixed to them. For John, this car was going to be his only car – not a weekend cruiser or trailered show circuit regular – so he was looking for low miles and a comprehensive history detailing a lifetime of care lavished upon it.

But before he started his search in earnest, John joined the Mercedes-Benz Club of America and engaged: before plonking down his cash on the counter for a premium 560SL, he wanted to check his thought process with enthusiasts in the know. His question was simply, “Am I daft for even considering buying an R107 as a daily driver?” Of course, enthusiasts sometimes look at these things with rose-tinted specs, but John’s question generated a lot of support and encouragement, and even a recommendation for a local (Massachusetts) broker to help him in his search: Bob Hatch of Hatch and Sons. Bob and his team are well-known experts, and I’ve even had the pleasure of meeting them back when they were shoehorning M117 V8 engines into Pagodas with factory-quality detailing and driveability. Suffice to say, John was in good hands.

For years, there was discussion among the Mercedes enthusiast community about R107s as collectible classics

Prior to finding his 560SL, John drove six examples with under 25,000 miles, but he was determined to find just the right combination of colour, condition, history, mileage, and gut-feeling. The car he ultimately settled on – the one you see here – had been delivered to and spent its life in sunny and dry Arizona. With just 18,554 miles at the time John purchased it, the car had averaged a scant 884 miles per year over its first 21 years.

In his first three weeks of ownership, John put a thousand miles on the car driving around New England just to ensure it was sorted and that there were no urgent or immediate needs, or issues with the car before he ventured any further. It performed flawlessly. Confident, John then headed south on a round trip from Massachusetts to Florida and back – about 3,000 miles – and had zero challenges apart from an unexpected snowstorm in Pennsylvania and a single blown fuse, which wasn’t a real problem other than needing to be a contortionist to access the fuse box and replace the busted item. 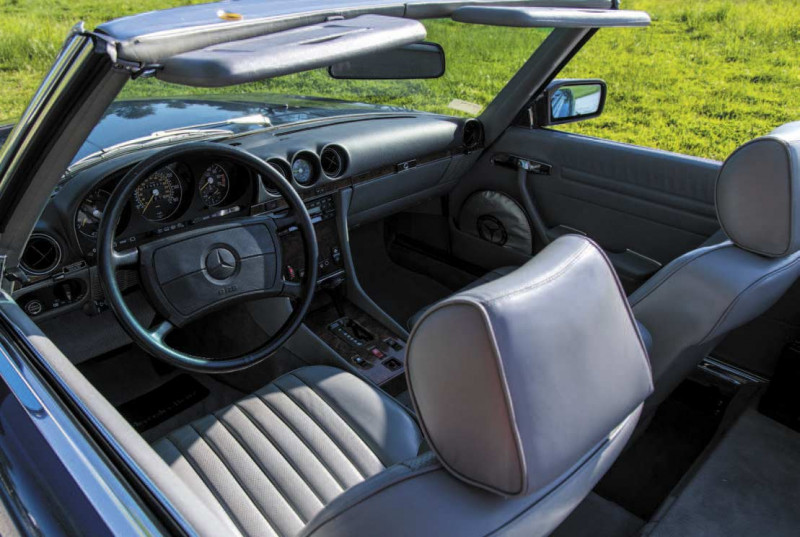 That first trip set the stage for years to come of road trips from regional outings to cross-continental excursions. John shares that he always seems to take the “long way” when he drives his 560SL. He laughs that he once spent $200 to buy a hot dog: about $5 for the hot dog and the remainder in gas. He has driven the car multiple times back to Florida, but that’s just the tip of the iceberg. He has driven the entirety of Skyline Drive through the Blue Ridge Mountains twice, along with the Blue Ridge Parkway. He’s taken it west to Wisconsin and Kansas City, south to Knoxville and Raleigh, and as far north as Nova Scotia where in 2015 he drove the car on the Cabot Trail – a ‘Top 10 North American Drive’. When we met, the car displayed 174,510 miles: 155,956 from his purchase in 2007. Not too shabby for a retiree.

No stranger to the open road

During his ownership, John says the car has only stranded him twice: once for a bad voltage regulator, and the other? Well, it couldn’t have been too serious because he couldn’t recall. Until his recent move from Massachusetts to Maryland to be closer to family, John had the car diligently and regularly serviced at European Auto Solutions in Waltham, Massachusetts, and he has binders of receipts documenting it all, in addition to the paperwork that conveyed when he first bought it.

Even after all those miles and smiles, John has nothing but positive things to say about the car and his experience with it. “It handles well on all types of roads in most weather conditions, as long as you remember that you are in a rear-wheel drive car with more brawn than brains. With a real trunk and an almost equivalent to modern-day SL trunk-like space behind the seats, you can actually pack a lot into the car, so trip planning is a lot easier.”

He does lament, however, that although the firm seats are comfortable for long trips, seat heaters would be nice. At the end of the day, John says he still smiles every time he drives the car. You can’t say fairer than that.

All figures from Mercedes-Benz for US version with catalyst

The SL has been almost faultless for John. 90-degree M117 V8 with one cam per bank.