When Sue Hedley bought an XKR 4.0 in 2002, little did she realise that the 2000 coupe had previously been a press car, appearing in several magazines including our predecessor. We revisit the metallic blue GT and talk to Sue about her two decades with the car. Words & Photography Paul Walton.

When former JEC chairperson Sue Hedley bought a 2000 XKR 4.0 X100 in 2003, little did she know that it was once a Jaguar press car, appearing in JW’s predecessor, among many other magazines. Two decades later, we revisit this beautiful coupe

It’s surprising how often everyday objects have secrets. Things such as an old, ignored painting hanging in a Scottish mansion that, in 2015, was discovered to be a long-lost work by Renaissance master Raphael, now worth a cool $25.5m. More recently, the assumed piece of costume jewellery found years ago at a car boot sale turned out to be a genuine, £2mdiamond when it was appraised by an auctioneer. Then, there’s this 2000 XKR. When Sue Hedley bought the two-year-old car in 2002 she had no idea of its past life and that it once graced the pages of several British carmagazines, including JaguarMonthly. 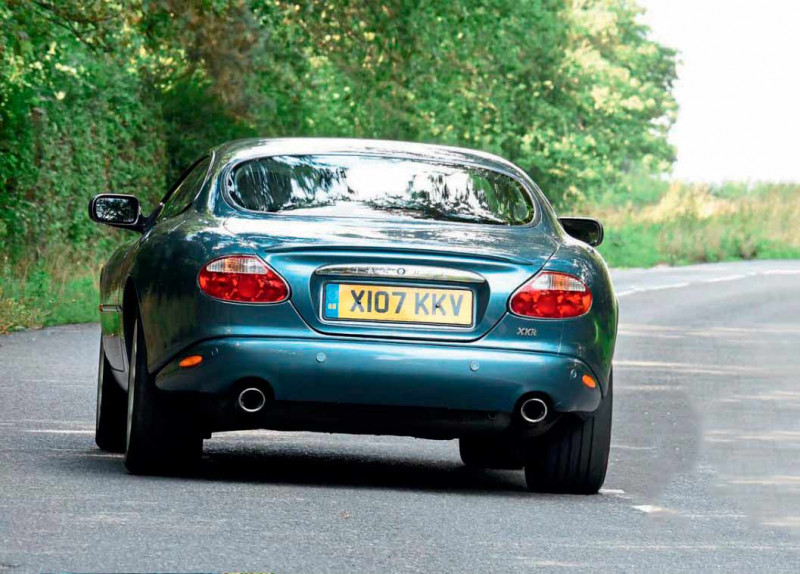 The coupe, registered X107 KKV on 1 September 2000, was ordered new by Jaguar’s press office. Painted in Mistral Blue and with the XKR’s standard 18in ‘Double Five’ alloys, as is still common with press cars, it was fitted with several optional extras. Many of these had just been introduced as part of the car’s facelift and comprised of satellite navigation (first seen in the S-TYPE the year before), a dual-band Motorola car phone and adaptive cruise control, developed for Jaguar by Delphi Automotive Systems. That consists of a microwave-sized sensor in the nose section that acts as a detector system, monitoring what lies ahead of the car by means of a radar ariel and proximity sensor, which then relates the information to control units for the engine, transmission and brakes. The 2001MY update also included new, flush-fitting fog lights, ‘jewel effect’ rear light lenses and a chrome numberplate finisher. Inside, airbags became standard and there were restyled front seats.

All in all, there was quite a history to it. That’s why I kept the original registration rather than put on my personal plate

For the next 12 months, the British motoring press tested the car. It appeared twice in JaguarWorld’s predecessor, Jaguar Monthly initially in the February 2001 issue when the magazine’s then editor, and current Kelsey Publishing COO, Phil Weeden drove it. “There’s little else on the road for the money that can match the XKR’s ability to accelerate from point-to-point,” he wrote. “The sort of gut-wrenching acceleration that this car provides is akin to a white knuckle ride at Alton Towers.” 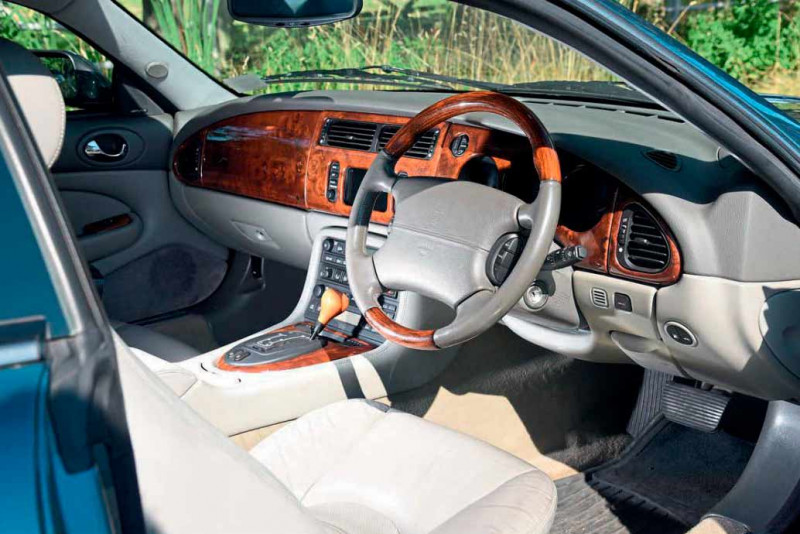 Phil was equally positive about the hightech options, saying of the phone, “Looks like Jaguar has thought of everything for the executive on the move,” and of the adaptive cruise control, “It’s a clever idea and one that is simple to use. Plus, it proved to be extremely effective in practice.”

A few months later, in the October 2001 issue, regular Jaguar Monthly contributor, Iain Robertson, compared the car with a Porsche 911 Carrera 2 3.6 996. He put the German ahead of its British rival due to being a better driver’s car, but surmised, “At the end of the day, it’s quite clear that the Jaguar delivers the best all-round package.”

As manufacturer press offices generally keep cars for only 12 months, in late 2001 the XKR was sold via a main dealer, Lancaster Jaguar, in Reading. For reasons unknown, the first owner didn’t keep it long. Six months later it was back with Lancaster, where it was spotted by long-term Jaguar enthusiast Sue Hedley when she took her current XK8 into the workshop.

“My dad had just sadly died and he’d left me some money. So I decided to buy the XKR.” Unaware of its past life, Sue was attracted to it because it was a facelifted, supercharged model and its excellent spec. At that time, Sue was on the committee for the Jaguar Enthusiasts’ Club (later becoming its first and, so far only female chairperson), responsible for organising events. “In 2003, I met Phil at one of the shows I had organised,” she tells me. “He took one look and told me, ‘I know that car; I had it as a press car.’ He later sent me a Jaguar Monthly’s XK road test book, including the two features.”

Later the same year, when her car was displayed at another classic car show, Sue talked to a Jaguar engineer who had prepared the car for the press office at Jaguar’s Whitley engineering centre. “All in all, there was quite a history to it,” continues Sue. “That’s why I kept the original registration rather than put on my personal plate.”

Sue discovered another unusual feature the first time she ordered tyres. “As soon as I pulled onto the forecourt to have them fitted, I was told I’d ordered the wrong size.”

Like all X100-generation XKRs, her car should have had two different-sized alloy wheels as standard: 8in wide at the front and 9in at the rear. But, unusually, Sue’s car had the larger rear wheels fitted on the front, too.

Lancaster contacted Jaguar on behalf of Sue, which offered to replace them with the correct size, but she declined. “I decided I liked how it sat on the road,” she explains. It’s unknown why they were fitted because they were never an option. Was it purely for aesthetical reasons or did the bigger tyres improve the car’s front grip?

It’s clear the moment I first clap eyes on the coupe that the bigger front wheels give the already aggressive XKR even more of a beefier appearance, and I’m surprised more owners haven’t opted for the same.

The big blue coupe looks as good as the last time it graced these pages, even though it has since clocked up 144,000 miles as her main mode of transport until 2016, when it entered semi-retirement. It has even been used for a couple of tracks days and once up the Prescott hill climb, where Sue used to marshal with her husband, Andy.

“I really enjoyed that,” she tells me brightly. In common with most other X100s, Sue tells me the rear of the sills need attending to, although they don’t detract from the overall look of the car, the light metallic blue paint literally glistening in the sun. The interior is also in great shape. The thick walnut veneer across the dash has a deep, unblemished lustre, while the cream leather covering the seats appears barely worn.

All the optional extras are present, too, but although the sat-nav was once cutting-edge – and, at £2,000, expensive – today the map’s basic graphics and clumsy controls would be more at home in an ancient console game.

The in-car phone (over £700) is on a long, curly wire, and I can imagine it being used by Michael Caine in a Sixties spy thriller. Apparently, it worked when Sue first bought the car but is no longer operational today, due to modern 4G SIM cards. Together with the adaptive cruise control, costing £1,400, these additions would have pushed Sue’s car to more than £60k when new.

Joining me today is Phil Weeden, who is making a film about the car for Kelsey Publishing’s YouTube channel, ClassicsWorld.

Two decades after he last did so, he puts the supercharged coupe through its paces: although much has changed in the intervening years, what he thinks of the car hasn’t. “Jumping into the cockpit after two decades is strange,” Phil says. “It’s very much like meeting an old friend, being back at home after all these years, even though so much has happened. There’s the familiarity with the low-slung driving position of the XK, that distinctive Spitfire wing fascia, the familiar burble on start-up and the exhilarating supercharger whine you hear on kickdown, when the 370bhp 4.0-litre V8 spools into life.

“It was a joy driving this XKR back in 2001, when I was barely 25, still cutting my teeth in automotive journalism. Fast-forward to the present day and it’s great to see how well the XKR has aged. The same, sadly, cannot be said of yours truly…”

The car’s former life with the Jaguar office – or its original appearances in this magazine – won’t make the car worth as much as a long-lost Raphael or a newly discovered diamond, but it does make it a small, significant part of the XKR’s history. And, for a Jaguar enthusiast like Sue, that gives it a value all of its own.

Thanks to: Sue Hedley

To watch Phil Weeden’s film about the XKR, head to YouTube and search for ClassicsWorld