This 1960 Chevrolet Bel Air sedan is a four-door, straight-six with little in the way of options – and that’s precisely why we like it so much. Words: Mike Renaut. Photography: Matt Richardson.

Much as we love muscle cars and top of the range allchrome luxury models, sometimes it’s great to see a humbler, everyday example of a classic car. After all, these four-door family cars of the mid-range series were the bread and butter of the automobile industry. Although since we’re discussing American cars, even the middle and lower series machinery still came with some sparkle and flair. Take this 1960 Chevrolet Bel Air sedan for example. This was a perfectly normal car that probably wouldn’t warrant a second glance by the time it was a month or two old. Almost certainly by 1970 it was virtually worthless. Yet somehow it survived because someone cared enough to keep it in decent condition. Fortunately, there are still people who love the once-average sedans and continue to want to care for them today. 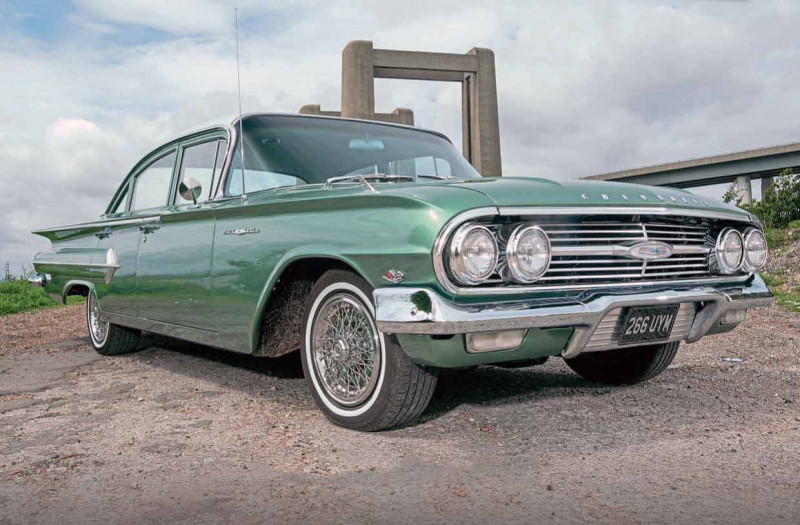 Graham ‘Tich’ Horsfield spotted this ’60 Chevrolet on eBay. “I was just surfing about like you do,” says Tich, “and it popped up for sale in New York. That was March 2015, I’d just sold my 1969 El Camino and I’d always fancied a gullwing Chevy, so I stuck in a bid. The seller described it as having ‘a few pinholes in the floorpan’, but when it arrived they were more like tennis balls and it obviously needed new sills too so we stripped the interior out. “Generally it was pretty good; we added new metal to the driver’s side floor and bought some two-door outer sills. In the end we made up some inner sills too on both sides, but other than a little surface rust it was a good, solid car. Even the boot floor was decent.”

The Chevy arrived painted green and white, the same colour scheme it now wears, but after those rust repairs it needed a respray. “We pulled out the engine to repaint the engine bay too, then I did the body in the closest green I could find to the original; it’s actually a British Leyland shade and a metallic where originally it was a solid.” The interior was virtually perfect: “I think that the interior had probably been partially restored a few years before,” says Tich, “but I didn’t get any paperwork or history with the Bel Air. It was the usual thing I do with a car; buy it because I like it, get everything working and perhaps make some subtle improvements or upgrades, then sell it when someone offers a fair price. I should probably have retired years ago, but I just love fixing up old cars.” 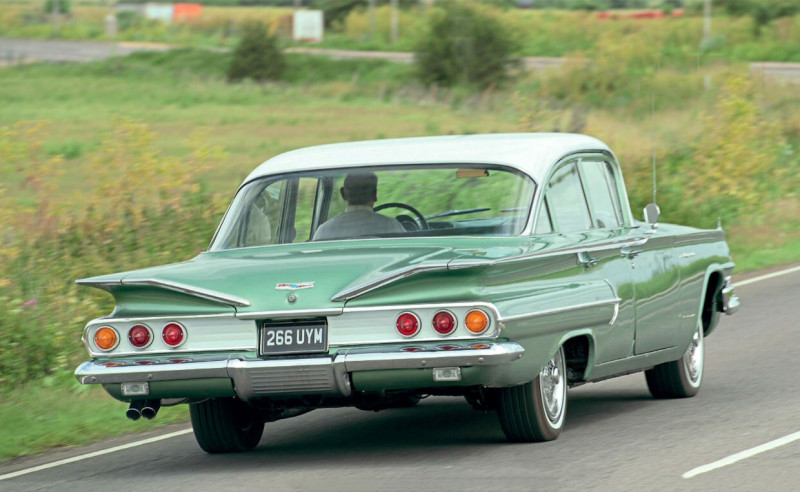 Other improvements Tich made included fitting a new sender to repair the non-functioning fuel gauge, repainting the engine bay and inner wings, air cleaner and engine, and adjusting the overly stiff gear linkage. “It was really hard to engage first and second gear, so I stripped it all down and repaired it. It’s a three-speed manual, column-change with overdrive on third, thus making it four-speed. I never got it into the overdrive though, in fact I don’t think I ever drove it over 50mph.”

Tich also added orange indicators to the rear. “We made it into an Impala, from the rear at least. On eBay I spotted the orange tail-lights that were made for the Australian market ’60 Chevys. My son Lee machined some new light surrounds to fit them.” Right-hand-drive Impalas were produced in Oshawa, Canada for the Australian, New Zealand and South African markets and built by hand from CKD (Complete Knocked Down as a kit of parts) or SKD (Semi Knocked Down partially built) kits on local assembly lines. The dashboard they used was identical to the 1959 Chevrolet one and was shared with equivalent right-hand-drive Pontiacs. 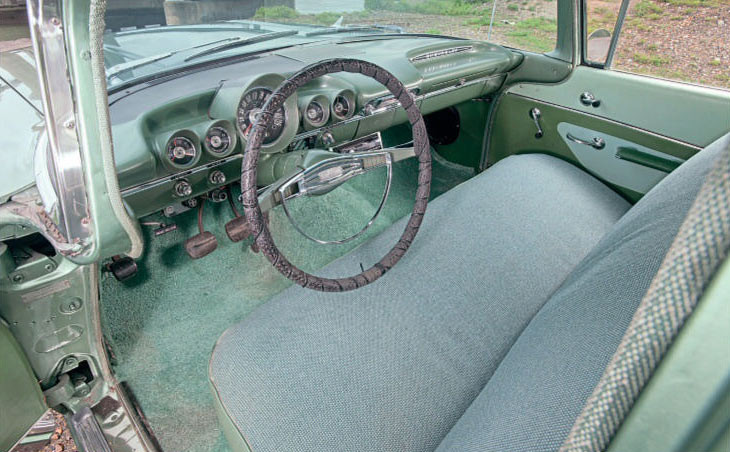 The Bel Air name came from an upmarket neighbourhood of Los Angeles and was first used by Chevrolet in 1950 purely for their two-door hardtop models. In 1953 Bel Air became a series and would remain that way until 1975, when the name was dropped in America. It would continue for Canadian home-market cars until 1981.

“‘SPACE, SPIRIT, SPLENDOUR’ RAN THE 1960 ADVERTISING AS CHEVY TONED DOWN THEIR 1959 SPACESHIP STYLING BY REMOVING THE FRONT ‘NOSTRILS’ AND BATWING FINS THAT A NUMBER OF CUSTOMERS REPORTEDLY DISLIKED.”

When the Chevrolet full-size line for 1960 was introduced in October 1959 it was obvious to everyone that it was merely a facelift of the previous year’s cars. Not that they hadn’t made big changes on virtually every panel, but that silhouette was just too distinctive. ‘Space, Spirit, Splendour’ ran the 1960 advertising as Chevy toned down their 1959 spaceship styling by removing the front ‘nostrils’ and batwing fins that a number of customers reportedly disliked. Following the one-year-only teardrop oval rear lights of the 1959s, Chevy would now return to model identity through the number of tail-lights. Impalas got six, lesser ranges Bel Air and Biscayne four. Other than badges, the only way to gauge how posh a Chevy was involved studying its interior or side trim. Impalas got a contrasting coloured side trim along the rear wings.

As with previous years, sedans and wagons had a slightly taller roofline than the sporty Impala coupe and convertible. All models rode a 119-inch wheelbase that was the longest in both Chevy’s history and in the low-priced market. The cars grew noticeably between 1957 and 1959; overall length was up by nearly 11 inches, width by seven inches and the weight increased by 300lb. While for 1957 the Bel Air had been the top model, it was pushed down a rung in 1958 by the Impala. In 1959 the base model Del Ray series disappeared and was replaced by the Biscayne. That kept Bel Air as the mid-range line, while Impala remained top model, a situation that continued for 1960. Evidently Chevrolet didn’t keep production figures for individual models, only body styles, so all we know is 497,048 four-door sedans were built for 1960 and that, not counting wagons, some 381,500 Bel Airs were built, versus 287,700 Biscaynes and close to half a million Impalas.

The VIN tells us this 1960 Bel Air four-door sedan was built at Tarrytown, New York and it left that factory painted Monotone Jade Green. Evidently someone painted the roof white somewhere later along the timeline. The original price of the 3580lb sedan was $2545. Options fitted included a $22 tinted windshield (having all the other windows in tinted glass cost $38) while the straight line tuning manual radio added $56; ‘outside rearview mirrors, body mounted’ were $6 each and overdrive cost $188.

The options list was vast for 1960 and included many extras usually found on luxury cars including air conditioning, six-way power seats and Positraction limited slip differential (which we’re fairly certain this Bel Air doesn’t have!). The fuel injection option was axed but you could specify a 283cu in V8, one of four truck-derived 348cu in V8s from 250 to 320bhp or the 335bhp triple carb 11.25:1 compression Super Turbo Thrust Special.

Under the bonnet of ‘our’ Bel Air is the somewhat milder 235.5cu in straight-six that offered 135bhp at 4000rpm and was fitted to a little over one in three 1960 Chevrolets built. Of course, a lot of the fun was that you could specify virtually any engine in any car, so a base model two-door Biscayne or even nondescript Sedan Delivery might be hiding a 335bhp engine that could chase down a Corvette. Other jobs Tich did to the Bel Air were to rebuild the front brakes, deal with a little surface rust around the screen and have a local exhaust place add a twin tailpipe to the single exhaust.

“That added a nice burble. I also put in a modern radio, serviced the engine including plugs and points and fitted thin white line flaps to the existing tyres.” 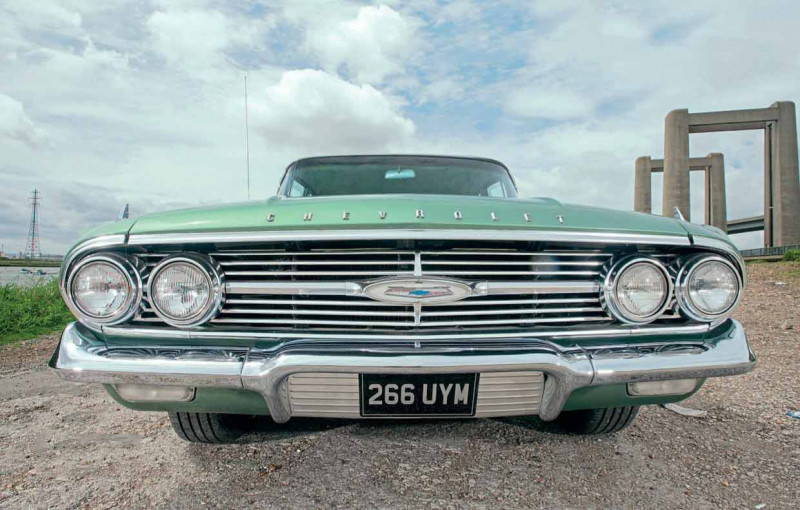 Those wheelcovers are, we believe, from a much newer Caprice. “They’re another thing I found on eBay,” remembers Tich. “An American guy had been selling some scrap metal to a junkyard, saw the four wheelcovers laying on top of a car and put them on eBay. The ’60 had come with the little dog dish-type hubcaps.

“I did also have to put a new headlining in. I had to pull it down at the front to access the top chrome moulding across the windscreen as it’s bolted on through the roof. As I pulled the headlining down it fell to bits. I had a trimmer come and fit a new one but it was awful, I ended up doing it myself. Once I advertised the Bel Air, I sold it soon after Matt took his photos. It was a nice car with a really good interior, but I found I couldn’t get on with the manual gear change and lack of power steering.”

Perhaps that’s the reason that despite being made in their multiple thousands, cars like this Bel Air are often now rarer than the top of the line performance models; being cheaper models they lack useful power options and are perceived as uncollectable, and few people bothered to save them. And judging by this ’60, that’s a real shame.

“DESPITE BEING MADE IN THEIR MULTIPLE THOUSANDS, CARS LIKE THIS BEL AIR ARE OFTEN NOW RARER THAN THE TOP OF THE LINE PERFORMANCE MODELS...”

Wheel covers were from a later Caprice. Almost a third of ’60 Chevrolets had the 235cu in six motor. Period advertising. Extra amber turn light added – originally it had only two. Plain-Jane interior. 1960 dash carried… ...over from 1959. Front-end styling plainer than ’59s.