It was an act of rebellion. Nothing made in Australia could match the exotic, space-age-looking exterior of the Purvis Eureka shown at the 1974 Melbourne Motor Show. The Eureka name came from Founder Allan Purvis, a determined man who — the story goes — was told that it would never make it past Australian Design Rules. Like a red flag to a bull, Purvis took a chance on the fiber-glass sports car to show that a small local operation could overcome both the bureaucracy and critics of the kit-car industry with a truly desirable unique product. 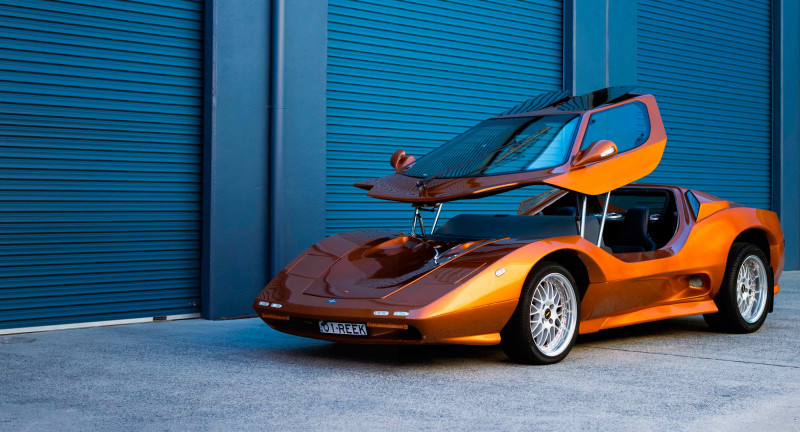 Amid the super-car age, sparked by Gandini’s Miura and resoundingly followed by the Countach reveal in 1971, who would have thought that a rear-engine rear-drive two-seat exotic could come out of Australia? What is more, only minutes down the road from its birthplace (Dandenong), in Melbourne’s south-east, the Bolwell Nagari had been in production at Mordialloc since 1972. Dandenong’s Eureka Sport went on sale in 1974 in the shadow of the “Supercar scare”, a reduction in import tariffs and the pending oil crisis, with the Nagari ceasing production in November that year after only 140 units. It was not going to be easy for Allan Purvis’ new baby.

Bruce Key, owner of the 1976 Purvis Eureka Sport which you see here — who had his “Eureka moment” when he was a starry-eye schoolkid — said: “It wasn’t a cheap kit, at the time. It was $2,800; you could buy a six-cylinder Holden Premier for less.” While most customers sourced existing Volkswagens, Aussie Beetles started from $2,400 new, in 1974; so for a completely-new Eureka Sport, you were looking at $5,200 — an HQ Monaro GTS was $5,961 in four-door manual guise, complete with a thumping great 350 Chev. And you did not have to build the Monaro yourself... 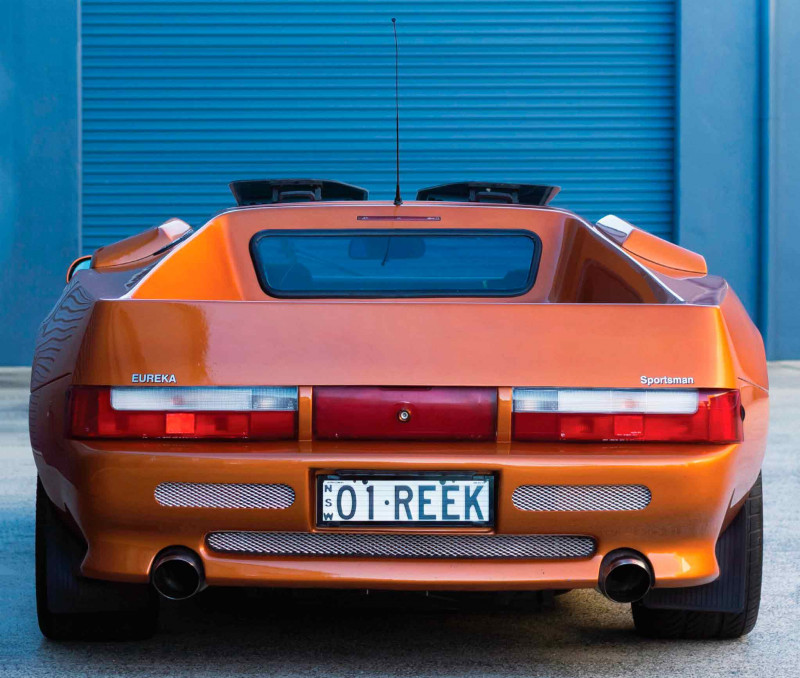 What the Eureka Sports kit offered which Holden nor anyone else in Australia could was svelte European-esque design in an affordable light-weight rear-wheel drive package. Underpinning the exterior was a far-less exotic Volkswagen chassis and powertrain. While not cheap, there was nothing like it for the money. The Volkswagen underpinnings delivered a dependable parts supply and low running costs, with the German Car Maker operating its Melbourne (Heidelberg) factory until 1976. At around 123 stone, thanks to the fiber-glass body, the Volkswagen donor platform endowed the Eureka with admirable performance; while also keeping it in the lowest insurance group — adding pragmatism to the appeal of the seductive styling.

That styling made a proper statement. The Holden Hurricane Concept of 1969 which, at 39-inches high, cheekily pipped Ford’s GT40 by an inch; sat slightly lower than the Eureka’s official 45 inches, but the Volkswagen-inherited 95-inch wheelbase matched the GT40’s 95 inches for overall proportions; although, both were shorter than the Miura’s 98-inch wheelbase. Compared to the Ford, the Purvis was actually a road-registerable model offered Down Under; against the Holden, it was a fantasy you could actually own, not just pin-up on your wall. The Lamborghini? The price of a house! Ultimately, the Eureka was attainable.

Key said: “The Eureka looked like a Countach. To me, the Hurricane wasn’t a touch on what this was. Its design was close, but was a bit more futuristic; whereas, the Eureka is similar in a timeless design. Even if you look at it now, it still fits in to what’s new.”

The wild-looking body was the work of Richard Oakes from Automotive Design and Development (ADD) in the United Kingdom, who created it for the Nova sports car. Clear influences include the GT40 and the Miura in places; yet its canopy offered a genuinely different aesthetic. That is what caught the eye of Allan Purvis, in 1971, while in the United Kingdom: prompting him to buy the rights to build the vehicle in Australia after seeing an early prototype.

“No one knows what it is,” Bruce laughed. “I get a lot of people videoing it. On the freeway, you see them coming past, they’ve got the camera coming out; so I usually sit on 100, so they can sit on 110 and come past. You’ll pull up at the [petrol station], and they’ll come over, and your five-minute fuel stop ends up being an hour!” Built on a locally-manufactured Volkswagen chassis, Key’s 1976 Eureka Sport is as Australian as a Purvis Eureka gets. On the outside, 18-inch Simmons wheels — another iconic Australian brand — replace the 14-inch Globes which were de rigueur four decades ago, teamed with Tiger Mica paint from Holden’s VT-VX Commodore palette. In one eyeful, there are three clear decades: the 1990s paintwork, the Simmons wheels which were all the rage in the 1980s (albeit, nowhere near 18 inches!), and the Eureka’s sharp-edge, yet curvaceous, body itself. 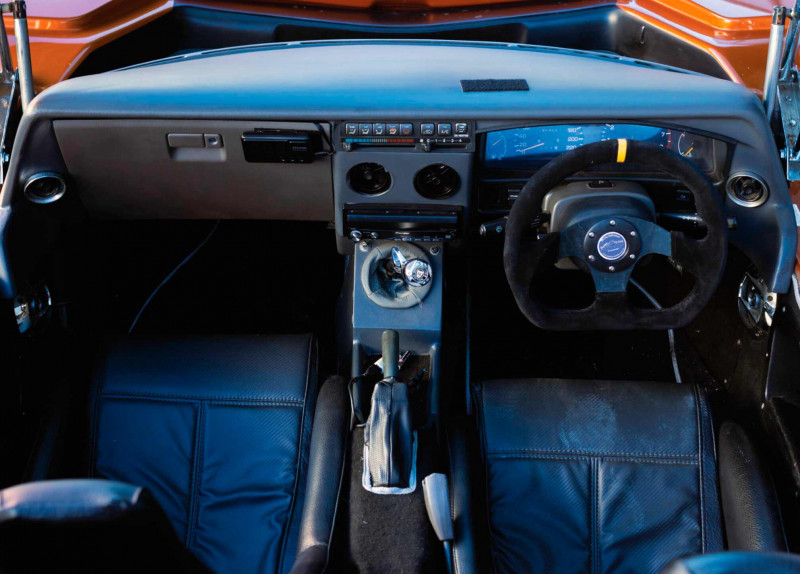 After propping open the Eureka’s single-piece canopy, there is a technique for climbing in: you stand on the bucket seat and slide down into the narrow — yet comfortable — cabin. The canopy is levered back into place — easily done with one hand, despite the windscreen being made of laminated glass — as you settle into an open- wheel race-car-like driving position. Most have used-Volkswagen instruments as part of the kit, but it is a different world view nestled low and tight between the chassis rails.

Build quality — like any kit car — depended on the customer. Self-assembly naturally brought various skill levels to the table for those confident enough to interpret the 34-page instruction manual’s 54-step process. “The quality of the finished product is in your hands,” the assembly manual candidly states. 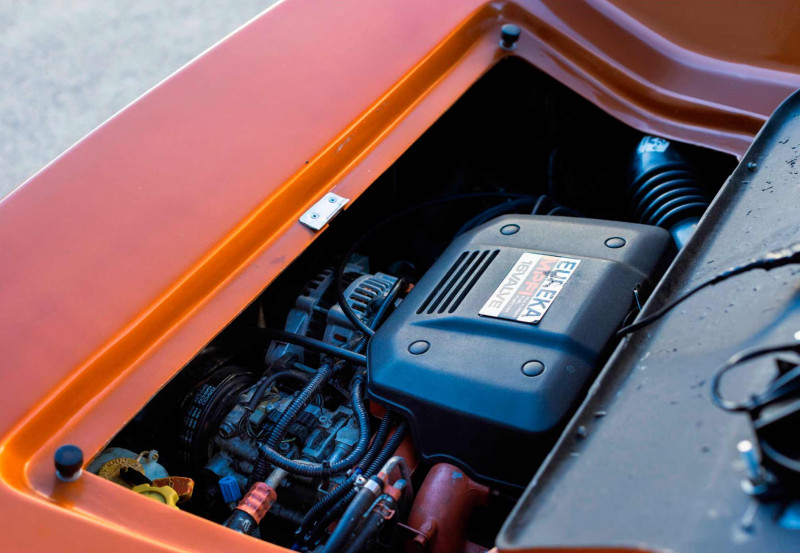 Mechanically, Key’s Eureka uses a Subaru EJ22 — a 2.2-liter from the Liberty — producing around 137 horsepower. Choices beyond the Volkswagen four-pot include Ford Pinto engines, denoted by the “F” in the later F4 model; as well as, Toyota engines, rotaries, and even — overseas at least — an electrified version. While Key’s Subaru engine maintains the flat-four engine layout, the rest of the driveline is Volkwagen — the four-speed manual driving the rear wheels, the steering box, torsion-bar front end, and swing-axle rear, converted to disc brakes on Bruce’s example here.

Key said: “It’s a driver’s car. They really handle well. Loads of grip. The weight ratio — they are under [157 stone] usually, with people in them and full tanks. They’re fairly quick off the mark and the four-wheel discs pull up really well.” Key also owns a second Sport which he uses as a track car — this time powered by a 1916cc Volkswagen engine — while the Tiger Mica Eureka is his daily with luxuries such as cruise control, air- conditioning, and even front and rear cameras to help point the low nose into parking spots. 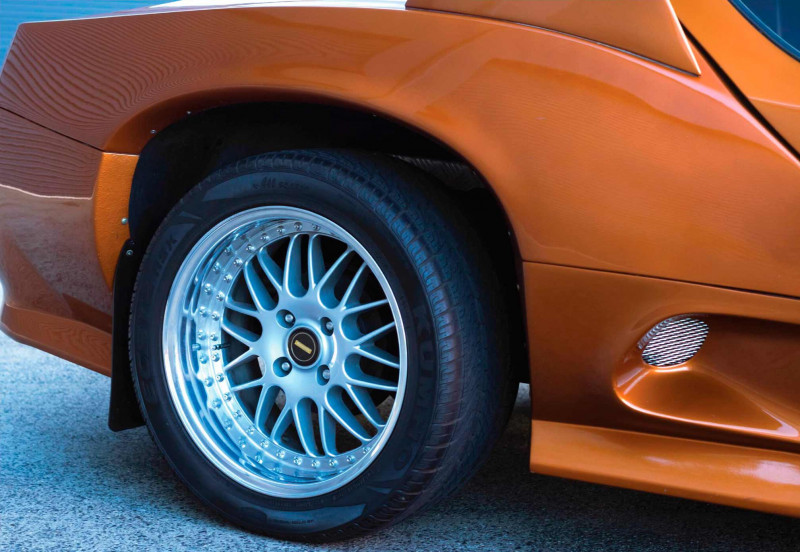 The appearance of a Eureka (technically, an ADD Nova) in the 1981 film Condorman shows the Eureka’s ostentatiousness, its kitsch, and unashamed parody of pricier sports cars. Its role in Cannonball Run reaffirms its visual oomph: that it is a toy, an exuberant dream, but that is what gives it swagger — it is brash, confident and made for fun. It is not pretending to be something else other than a hot-looking fun-to-drive coupe. Reviewing the United States’ version in 1973, where it was known as “The Sterling”, Car and Driver said: “Like ships in bottles, component cars are admired for their builder’s perseverance rather than any inherent grace. The Nova [Eureka] changes all that.” The quote was printed in the original Eureka brochure, that also shows a bikini-clad young women in what is peak 1970s machoism, yet there was modesty elsewhere. “An expensive high-performance GT Coupe it is not,” said Purvis’ advertizing, that described performance as “adequate”. No bragging there… Bruce Key witnessed Eureka’s arrival and the end of production, in 1991; that saw around 683 Eurekas built, with several hundred surviving today. He said: “It was basically the answer to bringing an affordable exotic car to the Australian people. You had your HQs, your Valiant Chargers, things like that, [but] anything that was a bit

different was in the ‘too hard’ basket for most people — especially, government agencies. Some of the kit cars which were produced back in the early days were not the best quality and the best design, so it soured a lot of people off, I think.” The Eureka was different in every way: inside and out. It continues to stake its claim in Australian motoring history because that can-do rebellious spirit carries on — despite local manufacturing’s end. It was as brash as Paul Hogan, as rebellious as AC/DC, yet easily outlived Bruce’s flared trousers. “When you get a good design and a good-quality vehicle, you can’t go wrong!”