Unique, one-off Ferraris have been part of Maranello’s mystique since the very beginning. While the golden era of coachbuilt specials was undoubtedly the 1950s, and while Ferrari continues to build one-offs today via its Special Projects division, there has always been a demand for specials realised by Italy’s independent design houses. Just one instance was the string of five Ferraris built for Luigi Chinetti’s North American Racing Team (NART) in the 1970s, all designed by Giovanni Michelotti (see panel on page). 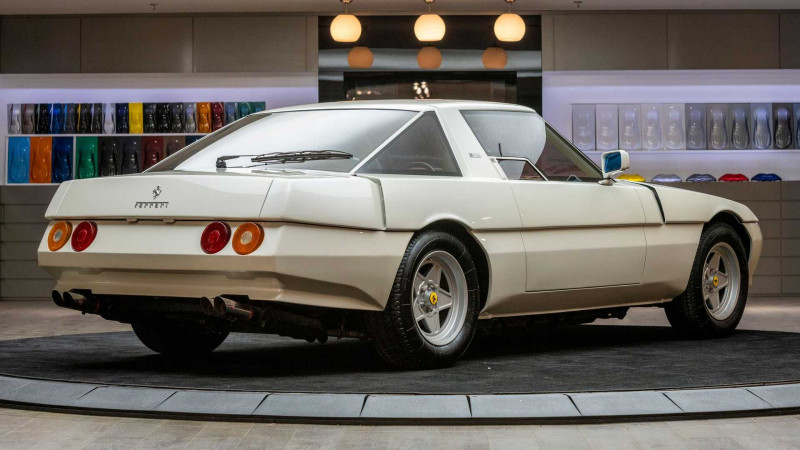 There was one further coachbuilt Ferrari by Michelotti in the 1980s – in fact the very last Prancing Horse ever completed by Studio Tecnico Michelotti. It’s called the Meera S and you’re looking at it on these pages. When it was made in 1983, the Turin-based carrozzeria was in troubled waters. Its founder, Giovanni Michelotti, had passed away in 1980, leaving the company in the hands of his son, Edgardo. The role of chief designer had been assumed by a Japanese designer called Tateo Uchida, who had met Giovanni Michelotti in Japan in the 1960s and went on to join him in Turin. It was Uchida who finished off the last mass production car designed by Giovanni Michelotti before his death, the Reliant Scimitar SS1 of 1980.

“ As conceived, the cabin had lots of features that were way ahead of their time – sadly almost all now lost ” 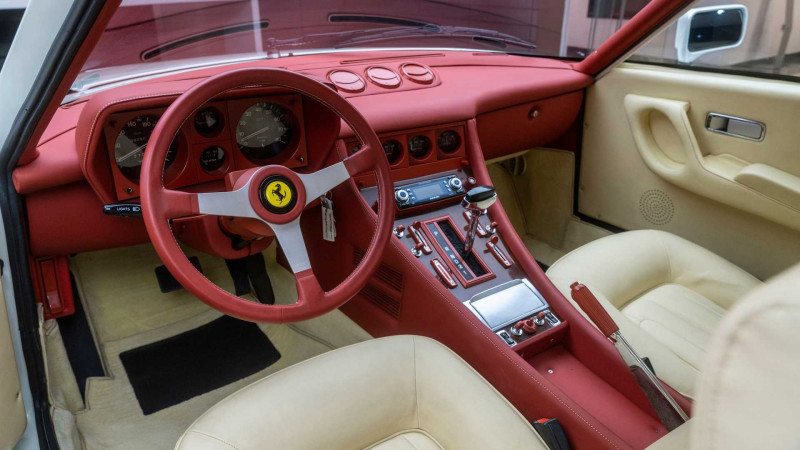 It was to Michelotti that a young Saudi prince turned for the special Ferrari that he wanted built. The idea was to take a Ferrari 400i and reclothe it in a more modern style with lots of unique features inside and out. According to a press release issued by Michelotti on the car’s debut in July 1983, designer Tateo Uchida said it “came as a challenge” but that he “wanted to design a real Ferrari, emphasising the company’s traditional sports car image, with a contemporary rather than classic look.” He therefore resisted the temptation to design something extravagant, despite being given a free hand by the client.

A brand new Ferrari 400i automatic (chassis number 41421) was despatched straight from the Maranello factory to Michelotti’s workshops in Turin, where the Meera S was built up by hand. The coachbuilder described the car as having “modern bodywork” and one contemporary press report described it as “harmonious and aggressive”. Some likened its look to Japanese sports cars like the Mazda RX-7 and Toyota Celica Supra.

The 400i basis was definitely discernible in the overall proportions and the familiar five-spoke alloy wheels. But all of the new metalwork was unique – mostly in steel although the nose, doors and tail section were in aluminium. The profile was wedgelike, with a low waistline and a distinctive indented crease extending all the way around the car, from the front grille and along the flanks, kicking up behind the rear wheelarches. The sloping nose had air intakes both below and above its pointed peak. Foglights sat below the bumper, while pop-up double headlights were positioned above the upper grille. Ferrari circular taillights were retained. The upper wings both front and rear had sharp cuts in them that housed air extraction vents – up front for the engine bay and at the rear for the cabin. 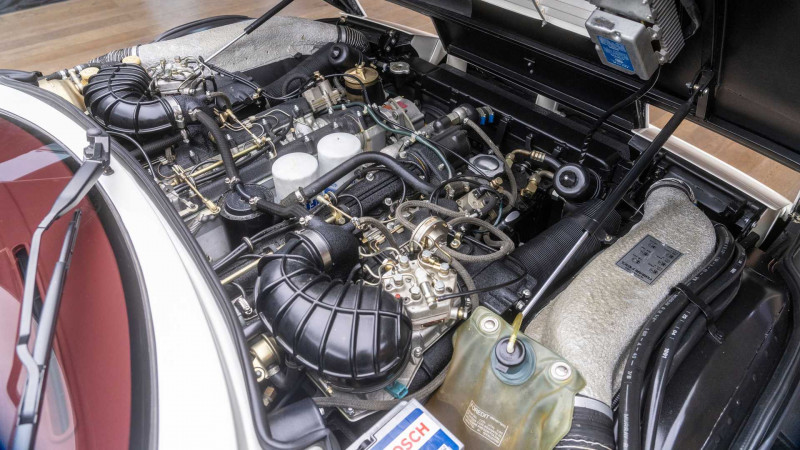 The tinted glasshouse with its discreetly hidden roof pillars was designed to give the impression of a wrap-around effect, front and rear. The main side windows were fixed, with tiny ‘ticket windows’ inserted. Perhaps the Meera S’s weirdest feature was wipers for the side windows. In addition to wipers for the front and rear screens, Michelotti fitted two additional wipers for the side windows. These were mounted at the base of the door mirrors and swept in an arc to produce a clear side view – a very unusual idea that we think has never been duplicated. These wipers have since been taken off the car, sadly.

Michelotti’s stated aim was to make the car “more agile” to drive and to that end it was 5cm shorter than Ferrari’s 400i and had some aerodynamic advantages. The car retained Ferrari’s 4823cc V12 engine with 315hp but had dual alternators and better cooling. This was enough to give the car a 0-62mph time of under seven seconds and a top speed of 152mph.

As originally conceived, the cabin had lots of features that were way ahead of their time – although sadly almost all of these have since been lost. Perhaps the most striking one was the digital electronic dash. This consisted of three separate Plexiglas housings arranged in a gentle arc, transparent so that they revealed the diodes and circuits at work within. The front passenger had a television ahead of them – very exotic for 1983 – with a rear-view video camera and closed-circuit TV monitor replacing the rear-view mirror. Only in today’s cars is this now starting to reach production but Michelotti did just it back in 1983. The Meera S also had a remote central locking system, again very advanced for 1983.

The Momo leather steering wheel was crafted especially for this car, while a very 1980s fitment was a high-end Clarion audio system in the centre console. Another progressive feature was dual-zone air conditioning, while an electric sunroof was also specified. One further peculiarity was that there was only one rear seat, with a mini-bar taking the place of the second seat (once again, now changed to a more conventional 2+2 seating layout).

Indeed, almost all of the original cabin has been replaced with much more conventional upholstery, console and instruments. The original 1983 cabin used beige velour upholstery for the seats, doors and curvaceous facia, with most of the other surfaces finished in contrasting grey suede. This was later changed to blue leather and later still to red-and-cream leather (as it stands today).

The Meera S was so called because Meera was the first name of the Saudi prince's companion, while ‘S’ supposedly stood for ‘Saud’. The car reputedly costs its owner a figure approaching $1 million. It was intended to be used during his stays in Europe but it is thought the prince parted company with the car after just a few months.

Then came a very curious phase in its story. The Meera S eventually passed into a substantial collection of Ferraris and Maseratis owned by Charles Zwolsman, a Dutch racing driver who competed in the 24 Hours of Le Mans. Sadly he was also convicted of drug smuggling and his car collection was auctioned off by the Dutch state in 2001.

By 2003, the Meera S had made it to the USA and was being offered for sale by the Motorcar Gallery of Florida; at this point it had just 4810km (3006 miles) on the clock and the asking price was $123,500. The following year, it appeared at the Cavallino Classic in Florida.

More recently – in 2010, in fact – the Meera S was sent to Ferrari Classiche in Maranello to have €252,100 worth of restoration work done, including an engine rebuild, reconstructed electricals, new exhaust and lots of other work. Today it is finished in Bianco Fuji paint, which does look amazing, but we can’t help feeling it’s a shame that so much of the original car has been changed and that so many of the novelties that made it unique are lost.

Ultimately, the Meera S ended up in Dubai, the location from which the car was put up for auction by RM Sotheby’s in February 2022. It sold for the healthy sum of €432,500, way above what a regular Ferrari 400i is worth – but then this is a singular piece of Italian coachbuilt history. As for Studio Michelotti, it closed its doors in 1991. Tateo Uchida, who also designed the Michelotti Pura in the 1980s (look out for a feature on that in Auto Italia very soon), eventually joined Toyota Europe’s design department.

The Meera S was the very last Ferrari bodied by Michelotti. But preceding it was a string of five Ferraris built by Michelotti for the boss of the North American Racing Team (NART), Luigi Chinetti. Unlike the 400i-based Meera S, these were based on the 365 GTB/4 Daytona. All five shared the same format of an angular wedge shape, shark-nose and all-round waistline crease – very much characteristics later adopted by the Meera S.

The first was commissioned in 1974 and presented at that year’s Turin Show, featuring cut-down doors (pic below). The second one had a curious white, red and blue paint scheme and was supposed to run at the 1975 Le Mans24 Hours, although Chinetti ultimately withdrew it (middle pic).

Three further special-bodied NART Daytonas were ordered from Michelotti to essentially the same specification, all featuring an indented sill design (pic bottom). One of these was displayed at the 1980 Turin Show.

Curious side window wiper, sadly now deleted. Mix of steel and aluminium in new body made it lighter than base 400i. Radical 1983 cabin (inset left) has since been altered.

The Ferrari Meera S feature was special not only due to the exclusivity of the car, but also because not many motoring publications have ever written about it. 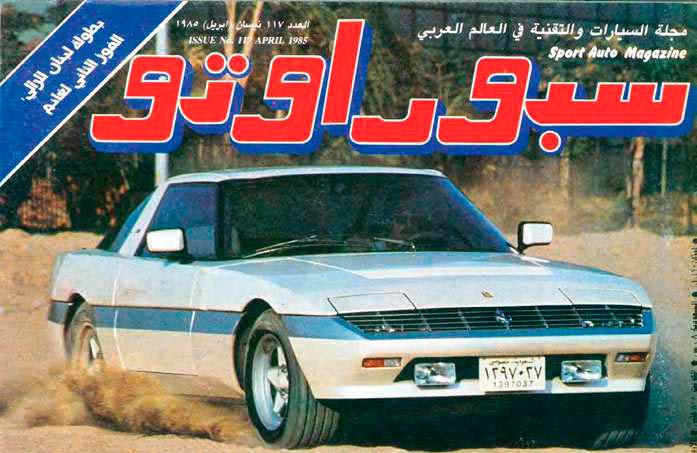 As the car was first commissioned by Saudi royalty, it was the subject of a test drive in an Arab motor magazine called Sport Auto in Saudi Arabia when it was (almost) new in the April 1985 issue. The magazine publishers loved the car so much they made it the cover star, where you can see it driven at speed, kicking up dust! This article is special in many ways. Sport Auto was the first (and only) to introduce Arab readers to the Michelotti-modified Ferrari. It includes the only photos of the Meera while sporting the original KSA registration plates. It also corroborates many of the facts you mentioned, such as having Tateo Uchida as codesigner, technical specifications, the exposed circuits and diodes in the transparent dashboard (so hard to read in dark, according to Sport Auto) and the rearview video camera. One photo showed this camera hanging on the top right corner of the rear screen, very reminiscent of CCTV cameras used in banks in the 1980s!

The last paragraph in the Sport Auto article might help add to ownership timeline and value. It translates: “For the record, this car is a one-off, and ended up in Jeddah, Saudi Arabia, where it was sold for one million Saudi Riyals. However, it is now up for sale for 400,000 SAR.”