Of all the cars gathered here today, and taking into account the vagaries of inflation, the Jaguar XK120 was not only the least expensive when it was new, but also a relative bargain. Who would have thought that £1263 would buy what was, in 1948, not just the UK’s but the world’s fastest production car?

Ironically, Jaguar boss Bill (Sir William from 1956) Lyons didn’t initially put his weight behind the model. His focus was the MkVII, set to be Jaguar’s first 100mph saloon and powered by an all-new, highly sophisticated straight-six engine developed during the war years by the in-house team of William Heynes, Claude Baily and Walter Hassan. But with completion of the first car delayed for its 1948 Earls Court debut, Lyons chose instead to showcase the XK120.

Audiences were stunned. What had been seen by Jaguar as a novel – but not particularly commercial – offering changed people’s views of what a modern sports car should look like. Using the MkVII’s chassis and engine, albeit in highly modified forms, everything about the XK120 show car shouted speed, from its low-slung body’s exquisite, flowing lines to its spatted rear wheels and raked radiator grille. The XK120’s advanced, double-overhead-cam ‘six’ with hemispherical combustion chambers and inclined valves was tuned to develop 160bhp, with 195lb ft of torque at just 2500rpm. A steel chassis with independent front suspension and an all-aluminium body (changed to steel in 1950, adding 112lb) meant the new Jaguar genuinely was a look into the automotive future.

As was its top speed. While the ‘120’ moniker was derived from near enough the car’s official Vmax, factory test driver Ron ‘Soapy’ Sutton achieved 126.4mph on Belgium’s Ostend- Jabbeke motorway, validated by the local Royal Automobile Club. The car ran a catalogued taller top-gear ratio, but was otherwise standard. He then replaced the full-sized split windscreen with a single aeroscreen and recorded a two-way average of 132.6mph, hence our headline figure here. Even in The Motor’s impartial hands, the first prototype XK120 accelerated from 0-60mph in 10 secs and hit 124.6mph with its hood and sidescreens in place.

Competition was the natural showground for the XK120, and it wasn’t long before Le Mans, the Targa Florio and the Mille Miglia were ticked off Jaguar’s to-do list, each with varying degrees of success. Rallying proved to be its forte, however, and the now famous NUB 120, campaigned by Ian Appleyard and his wife Pat (Lyons’ daughter), took two RAC Rally wins, victory in the 1951 Tulip Rally and a Gold Cup for finishing three Alpine Trials with no penalty points.

Today, it feels appropriate that our test car is a tribute to ‘NUB’. Built in 1950, this Jaguar-owned XK120 has been prepared for the modern-day Mille Miglia, complete with Brantz digital rally timers on the passenger side of the dashboard and a pair of analogue Bremonts set high below the dash-top-mounted rear-view mirror. Otherwise, apart from a fire extinguisher in the passenger footwell, the car’s interior is near-standard.

Once you’ve managed to prise yourself into the snug-fitting, leather-trimmed bucket seat (the small door and large steering wheel favour the lithe), you face a simple dashboard inset with two widely spaced main clocks for revs and speed, along with three small, secondary dials covering oil pressure/water temperature, amps and fuel. A chromed fly-off handbrake is on the passenger side of the transmission tunnel, from where a short gearlever sprouts. The four-spoke steering wheel – white on this car – is large and near-vertical, with a protruding conical boss that sits nicely in line with your sternum…

Wait for the float chambers of the twin SUs to fill before thumbing the starter, and the 3442cc ‘six’ fires into life, emitting a sharp bark through its twin exhausts. There’s no detent for reverse in the Moss ’box, so you take care not to shift the lever too far to the left and forward to select first. Driving is simplicity itself; it makes few demands on you, thanks to main controls that are light and progressive in their action. The gearbox lives up to its reputation by being precise but easy to catch out, with a short grate of gears if you dare to rush it. Which you’re prone to do, because this car just cries out to be driven hard. Feel through the Burman steering box is excellent, and as you gather confidence and turn in to bends with more conviction, your position – low to the car’s centre of gravity and immediately before the rear axle – gives you an intimacy with its dynamics that must have been a real boon on those ice-covered Alpine roads.

Gearing is short on this car, so there will be no chasing of three-figure-plus speeds today, but it doesn’t require much imagination to put yourself on that empty Belgian motorway 70 years ago, crouched behind a tiny aeroscreen and watching the numbers climb.

With the start of the jet age, aircraft speeds (literally) soared. On 15 September 1948, Major Richard L Johnson, a WW2 veteran from the US Air Force, flew an early North American Aviation F-86A Sabre swept-wing turbo-jet fighter to 670.98mph along a 3km course at Muroc Air Force Base in California, setting a record that would stand for the following four years 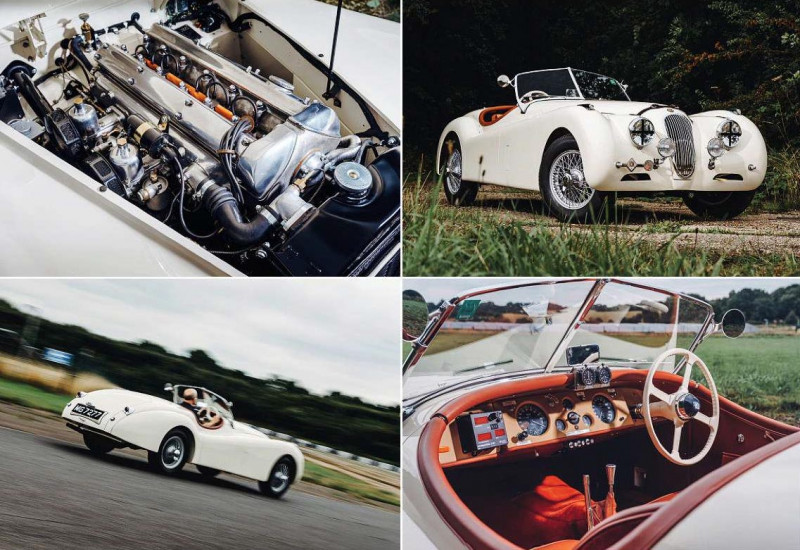