Lots of us enjoy and admire our cars, but Joschka Röben from near Hannover in Germany can say that a 1993 Bentley Turbo R changed his life. Here’s Joschka’s story.

How do you get excited by a car like this as a Nineties kid? Well, as a little boy, I would always see cars with four round headlights and find them somehow attractive. At the time, the car I wanted was a Jaguar XJ from the mid-90s...and when I was older, and in a position to buy something, I initially wanted to find one of those. But when the time finally came, these cars from Crewe took centre stage of my attention. So why not aim for the very best? The only challenge was which Crewe car? To answer that question, I attended the 2018 RREC Annual Rally to gain an impression of the various models produced over the long lifespan of Rolls-Royce and Bentley. After one drive in a Turbo R, the die was cast!

Before I get into the history of the car I finally bought, here's an anecdote. A good friend said in 2019, ‘If you buy a car like this, we'll go to Blenheim Palace in England to celebrate 100 years of Bentley Motors.’ Well, it happened, and my car was parked there with 1,320 other Bentleys in front of the birthplace of Winston Churchill. The hundreds of Aston Martins, Porsches and McLarens which were also there as part of their clubs, were discreetly put in their place. It just didn't make it into the Guinness Book of Records because someone was probably too lazy to count!

In the summer of 2019, I found the one for me. PCX46761 is a standard Turbo R with the shorter wheelbase, Racing Green on the outside and beautiful Magnolia on the inside. The carpets are Portland Stone while the contrast piping for the seats and the dashboard cover is Spruce Green. Small etymological digression: The word spruce comes from ‘z Prus’, which means ‘from Prussia’ (a former German state until 1947) in Polish and then found its way into the English language as ‘spruce’ via the Hanseatic League. 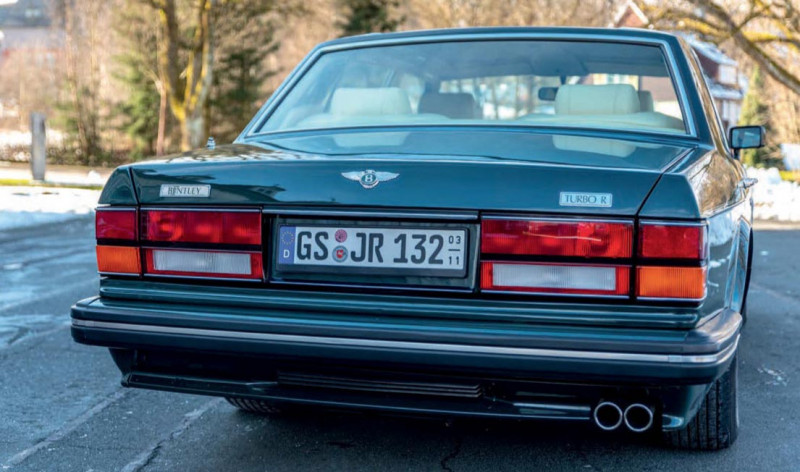 The FM radio as well as the CD changer and the cassette deck are used regularly in alternating order – and music will soon be available through a custom-made Bluetooth adapter to the CD-changer port. There is no reason to install a new, optically unsuitable radio in there! I personally like the combination of automatic selector lever in the centre console with driver airbag and no front passenger airbag, but a massive glove compartment door instead. In addition, we have the decorative chrome stripe on the bonnet (no longer there from ‘94) and the green emblems, which is unique for this model year. To be honest, I've never entirely made friends with the red badges…!

This car was one of only 13 short-wheelbase cars delivered to Germany in the 1993 model year, while only four long-wheelbase examples came here (credits to Marinus Rijkers – see rrsilverspirit.com). A total of 141 Turbo Rs with a short wheelbase and 62 with a long wheelbase were built worldwide for that model year, making the production total one of the lowest during the lifespan of the SZ-cars.

I took a deep dive into the history of this particular Turbo R. The first sign of life is a ‘New Car Order Fax’, dated April 15, 1993. This was sent by a dealer called Auto-König in Munich, Germany and received by Rolls-Royce at 12:43:57am (How’s that for detail? -Ed). According to the guarantee card, the car was ordered by the Warning company from Dreieich, near Frankfurt am Main, which still exists today under new management at a different address. On 31st May 1993, Rolls-Royce Motors Cars International SA then sent an invoice from Switzerland to the dealership: 252,477 Deutschmarks (£100,990) before taxes for this new ‘Crewe's Missile’.

The next document is a ‘computer message’ on 22nd June 1993 at 3:52pm, wherein Rolls-Royce International SA confirmed the receipt of payment to the factory and asked for the vehicle to be released as soon as possible. In a Delivery and Advice Note dated 28th June 1993, the ordering retailer was then informed that the car would be delivered by 30th June – pretty quick work.

The works documents now show that the ashtray got ‘lost’ on the way from England to the south of Germany. It seems that somebody took a souvenir while they transported the car… luckily, with a few hectic internal faxes between people called Johann, Richard, Marie-Rose and Graham at Rolls-Royce HQ, the problem was resolved, and a new ashtray was on the way. At Auto-König, the car went to its first custodian: the owners of the Warning company. The price of DM 252,477 then became DM 348,418, as the 20% Auto-König margin and 15% VAT had to be included. That was £139,367 back then, and adjusted for inflation, that’s €281,708 or £236,661 in today’s money!

After delivery to the owners of the Warning company (to Mr. Werner and Christa Warning), the car was driven enthusiastically for a number of years. Mr Warning was a big Anglophile and bought the car because his then-new Aston Martin Lagonda was plaguing him with that model’s well-known problems and he wanted something more reliable. Unfortunately Mr. Warning died unexpectedly in 1996, which is why his wife Christa gave the car to a Frankfurt dealership called Saturski. Sadly, the Saturski dealership no longer has any documentation of where and to whom they sold the car. From 1996 to the next trace in 2008, I’m still in the dark about the car’s story, and my research continues.

The biggest problem at this point is human frailty: everyone involved in the sale or early maintenance of the car has already passed away. The next documented record does not appear until 27th May 2008. At this point Bentley Düsseldorf accepted the car with a mileage of 48,437 km for a service. After that, the car was sold by them to a new owner in Spain.

Unfortunately, for reasons of privacy, the dealer did not wish to disclose more history. However, thanks to the hard work of a later owner (and a friendly employee in an embassy!), a Spanish registration of the car from Barcelona dated 30th July 2008 was found. The owner at the time was a real estate developer of Russian origin residing in Barcelona. He bought the car that same year and sold it a year later, as he was presented with a rather high bill from Bentley Barcelona regarding the repair of the windshield-wiper linkage. Furthermore, he wasn’t pleased with the ride of the car, so he decided to let it go.

Tom Witzel of Tom’s Club Garage in Limburg, near Frankfurt am Main, then transferred the car from Spain to Germany and sold it to the next owner, a doctor from Düsseldorf, who took over on 8th July 2009. After three years the car changed hands again on 24th October 2012. The mileage of the car at this point was 64,220km. The 4th and 5th owners were two brothers in Koblenz and after changing ownership from one brother to the other in 2015 and now at 73,251km, the car passed over to the 6th and current owner near Hannover (my humble self!) — on 11th August 2019. Incidentally, as of today, the car has now exceeded 100,000km...

The general reception of the German public is quite positive – never have I received a negative comment. But strangely they either think it’s a Rolls-Royce (because there’s a hood ornament) or a Jaguar (because of the green paint). The biggest impact seems to come from the magnolia interior and the walnut veneer, which can rarely be found in our Teutonic competitors, and easily draws attention from people walking by. Of course, such cars also require maintenance. However, in addition to the usual service, the work I had to do was limited to new woofers in the four doors (the surrounds had crumbled) with additional sound deadening, plus an overhaul of the radio to correct a display with dead pixels. The rebuild of the fuel distributor’s ruptured membrane and the mixture control unit’s faulty potentiometer were done directly at Bosch. The car has been serviced by Tom's Club for the last ten years, but is now mostly serviced by myself. More often than not, my curiosity as an engineer is getting the upper hand!

Now we come to the part where the car’s influence on my life becomes apparent. You may have been asking yourself why all this is so important to me…well, it’s like this. As a proud new owner, I visited the previous keeper of the car in autumn 2019 and after a pleasant meal, he pointed out to me that a wheel lock cover had been lost on one hub cap.

Well, my 3D printer was waiting for new ideas at home. Winter was coming and the rims were supposed to be re-done as part of various painting work anyway, so the idea of simply recreating this one missing part (UR71751) came about. Young as I am, this was naturally shared on social media – and caught the attention of IntroCar, Flying Spares and Park Ward Motors. From then on, this product was included in their range and every buyer of the caps (and the other shaped ones) now drives around with the same silver shade, which finishes the wheels on my car perfectly.

The story could have ended here, but it doesn't. In July 2020, in the middle of the COVID crisis, my employer went bankrupt and ceased operations. In such situations, most people go looking for a job, but I decided to do the opposite: to become self-employed and to found my own company. So I now produce spare parts for historic and modern cars (and, in the meantime, yachts!) with the help of 3D modelling, 3D scanning and 3D printing. I hope I can tell you more about this and what has happened since summer 2020 in a future issue, but for now, I’m enjoying life not only as a Bentley owner but also as part of the industry – and all thanks to my Turbo R.

THANKS TO: Joschka wishes to credit IntroCar’s Annika Impallomeni for checking his written English. Thanks Annika!

SHOW US YOUR PRIDE AND JOY

If you fancy seeing your own Rolls-Royce or Bentley within these pages, it couldn’t be easier! We’re interested in any model of any age – and even its condition isn’t important, as we’re just as keen to see ongoing projects as we are potential prize-winners. All you need to do is email us a small selection of good quality jpeg images – and we’ll do the rest. Within your email, don’t forget to tell us a bit of history about your car, details of any work carried out, or perhaps your future plans for it. The more information, the better! Email us at rrb.ed@kelsey.co.uk – and don’t forget to send your photographs fullsize. The higher the resolution, the larger we can use your images. If you’d prefer to send non-digital photographs by post, that’s also no problem. Simply write to: The Editor, Rolls-Royce & Bentley Driver, Kelsey Publishing Ltd, The Granary, Downs Court, Yalding Hill, Yalding, Kent ME18 6AL.

“...strangely they either think it’s a Rolls-Royce (because there’s a hood ornament) or a Jaguar (because of the green paint).”

Joschka with a 3D printer and a likely customer. There's the reproduction cap (Part UR 71751) that started Joschka's business

Gear selector had moved to the centre console by 1993. Joschka managed to capture the moment his car completed its first 100,000km

Auto-König was a supplier of luxury automobiles in Munich from 1934 to 2009 and one of the last independent dealers in Germany. In 2009 the company had to file for bankruptcy in the wake of the financial crisis. The successor company of the former owners operates today under the name ‘C&C Premiumcars’. The company Schuttenbach Automobile, which was later taken over by Bernd Pischetsrieder (CEO of BMW 1993-1999 and VW 2002-2006), now resides in the former premises of Auto-König.