Sometimes a particular trade or profession can be useful when owning an American car. Think mechanic, petrol station owner… marriage counsellor (we’ve all been there!)… or even electrician. The owner of this superb 1967 Pontiac GTO is the latter and has found those skills invaluable in his fettling of the Poncho after acquiring it seven years ago: “I’m the sort of guy that likes everything to work,” explains Ian McDonald from Bury, Greater Manchester. And while the car was in pretty good shape when he acquired it, there were a few niggles he had to address before he could be completely satisfied, but more about those later… 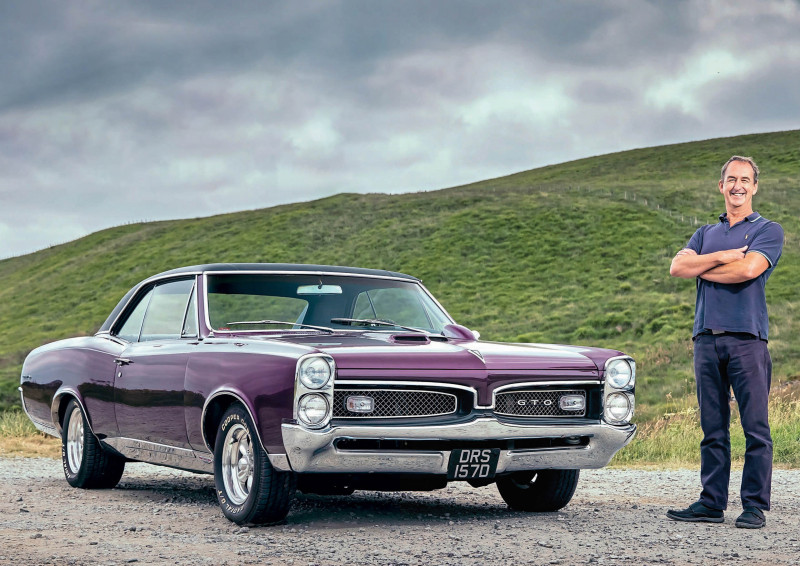 “AND WHAT’S IT LIKE TO DRIVE? AT SLOW SPEEDS OR PARKING IT’S A BIT OF A HANDFUL WITH NO POWER STEERING AND A SUPER-STIFF CLUTCH, BUT ON THE ROAD, MOVING, IT’S A DREAM!” 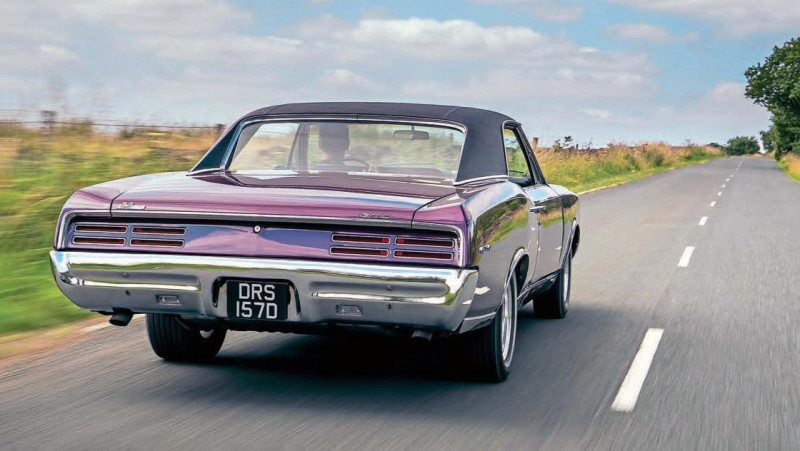 Ian has always had a passion for American cars, even as a teenager he’d spend his weekends looking at them in a local American car dealership back in the Seventies. “I’ve always liked that shape of car…” he says, pointing at his Pontiac, “I’ve just always liked that style — like Lincolns, Cadillacs… the ‘three-box design’, in a nutshell. For me that’s the era of American cars that really got it right. They’ve just got a presence…” This GTO is Ian’s first American car, but he has had other classics previously, such as a 1975 Toyota Celica (“a baby Mustang” is how he describes it) a Triumph Herald, Cortina and HB Viva…

Did he set out to buy a GTO? “No, I was looking for a 1965 Buick Riviera and I found one online in the States. When I contacted them, they said it had been sold, so I had to start again from scratch.” The search ended up much closer to home (York in fact) and resulted in something a little more lairy than the original desired-for Riviera – this GTO. When Ian went up to see the car and test drove it, he just had to have it.

So, what had he bought? Well, the GTO was built in Baltimore, Maryland and delivered to Frederick Pontiac in Woodbury, New Jersey, where it was sold on November 14, 1966. Nothing is known of the original buyer; however, they had specified the push-button radio ($61), hood-mounted tach with Rally Cluster ($84.26), deluxe wheel discs and three-speed HydraMatic automatic transmission. Things go blank until the car was restored in North Carolina prior to 2005 (there’s still an inspection sticker on the windscreen from that year) when the GTO’s colour was changed from Burgundy to Plum Mist (a ’67 GTO colour made popular by the xXx film franchise) and a new black vinyl roof was added. It was imported to the UK in 2006/2007 and spent a rather glamorous-sounding six years in Spain, periodically being sent back to the UK for MoTs and servicing. In 2013, the previous owner from York bought it and two years later, in 2015, Ian acquired the car. 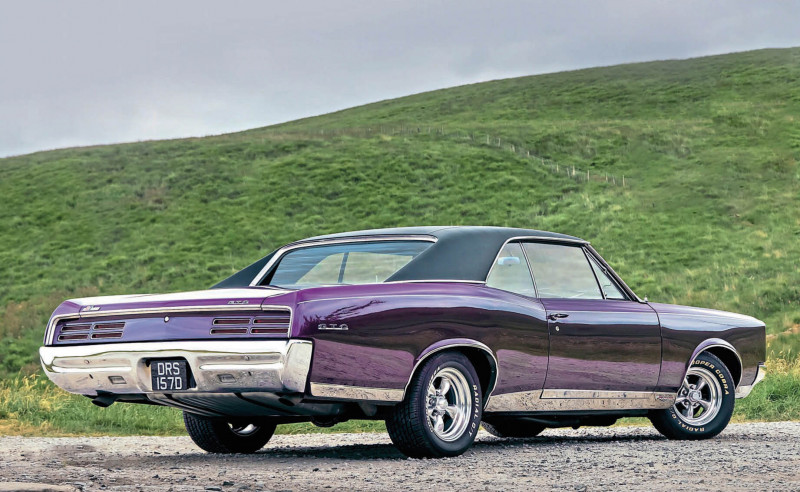 The Pontiac’s original engine has been replaced with a 1971 455cu in (7.5-litre) V8 from an early 1971 Pontiac and it features a Muncie four-speed manual gearbox with a Hurst shifter and a heavy-duty racing-spec clutch. There’s no power steering or power brakes, but there are discs up front (discs were offered as a $105 option for the first time in ’67; prior to that they were only available on Corvettes). Other upgrades include a four-barrel Holley carb and Edelbrock manifold, plus Mallory electronic ignition and three-inch Magnaflow stainless exhaust system. One change that had been made which was less ‘race-inspired’ than the others was swapping in a 3.08 gear ratio in the rear end (from the original 3.90) for more comfortable and economical cruising on motorways. During the car’s restoration things like the aluminium radiator were added and the aftermarket wheels were fitted (14-inch on the front and 16-inch on the back, clad in Cooper Cobras), as well as the previously mentioned black vinyl roof and the aftermarket air conditioning (vital for Carolina’s unbearably humid summers).

Bit of a handful

What’s Ian had to do to the GTO while it’s been in his custodianship? First off, he added a manual choke – “I found I was having to pump the gas about 10 times to get it started” – and he’s added a new fuel pump too, all of which seem to have helped with starting the car. His electrical skills have come in useful (he describes auto electrics as being like a ‘dark art’), ensuring all the interior lights were made to work, most of which seemed to have remained disconnected after the restoration. He’s also added new headlamp bezels and bootliner, making use of services of advertisers in Classic American such as National Parts Depot and Summit Racing. And what’s it like to drive? “At slow speeds or parking it’s a bit of a handful with no power steering and a super-stiff clutch, but on the road, moving, it’s a dream!” All this means that Ian has had to come to terms with a totally different modus operandi of driving with the GTO, but it’s one he’s become used to (“I stall my Transit van after driving the GTO, as the clutch is so light in comparison!”). Would he consider fitting an aftermarket power-steering kit? After all, they’re available and the car has had so many other changes and alterations, it would hardly affect its originality: “I’ve thought about that for the past couple of years…” says Ian, but the jury is most definitely still out on that one…

“THE PONTIAC’S ORIGINAL ENGINE HAS BEEN REPLACED WITH A 1971 455CU IN (7.5-LITRE) V8 FROM AN EARLY 1971 PONTIAC AND IT FEATURES A MUNCIE FOUR-SPEED MANUAL GEARBOX WITH A HURST SHIFTER...”

Welcome to our May issue – I don’t know about you, but it feels like this year is flying by; maybe it’s the contrast with the last two years’ glacial pace caused by lockdowns and Covid. This month’s magazine features not one, but two purple muscle cars. This wasn’t deliberate, it’s just a bit like the old bus analogy – we had one then another one turned up very shortly after and we just had to share them both with you.

In some ways they represent different ends of the muscle car spectrum. The ’67 GTO is nearer the beginning of this halcyon period, while the ’72 ’Cuda the end. And that’s the funny thing, the muscle car era barely lasted a decade, yet it’s the era that many enthusiasts wax lyrical about or obsess over… I wonder in the future if the era we’re living through now will be referred to as the Second Muscle Car wave?

After all, you can buy outrageously powerful Camaros, Mustangs, Corvettes and Challengers today… will that be the case in a decade? Hmmmm, what do you think?

Also kicking off this month is the story of my own muscle car’s restoration; it was something I knew eventually I would have to undertake, but I’d been procrastinating about for years, but then events overtook me and I was forced to bite the bullet. There is something quite nice about having a scruffier car, as it means you can enjoy it more without worry. “Another ding? Nah, who cares…!” With an immaculate car, a lot of the fun evaporates, as worries about scratches or worse come to the fore. Well, I hope you’re looking forward to a summer of fun, getting out and enjoying your vehicles!