To discover whether the new hybrid F-PACE is any good at off-roading, we attempt one of the UK’s longest green lanes in a P400e.

We ask whether you can take a new hybrid F-PACE off-road by attempting one of the UK’s longest green lanes, Rudland Rigg, in the rugged North York Moors

It’s when I become stuck in the mud, all four wheels turning but the car not moving, that I start to question my recent life choices. I’m not talking about forgetting my mother’s birthday (although that was a disaster) or buying too much milk but rather taking an F-PACE along Rudland Rigg, one of the longest green lanes in UK. Why did I not test the size of the boot when visiting an expensive hotel in the South of France instead?

When in EV mode, the F-PACE isn’t as fast as the I-PACE 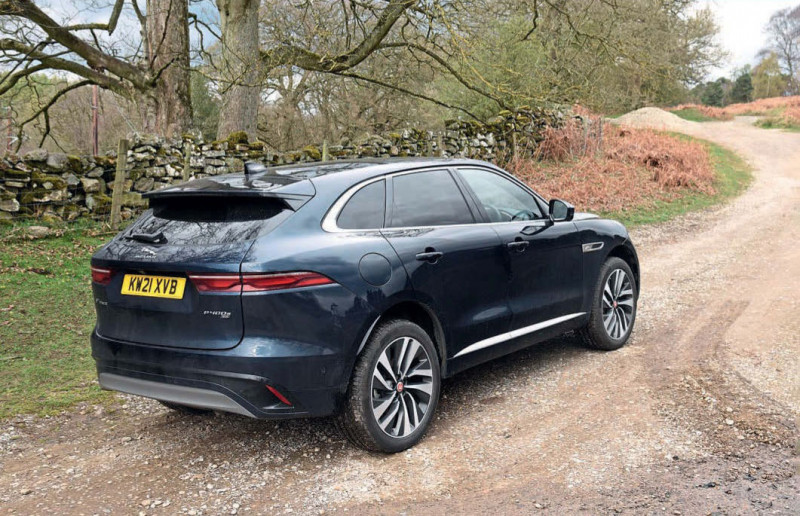 But in defence of my choice, following the F-PACE’s launch in 2016 I’ve taken the car across the UK and through several parts of Europe but the one place I’ve never driven it is off-road. With the model now seven years old and recently refreshed – which includes a plug-in hybrid option – it’s time to change that Rudland Rigg starts at a nondescript corner a few miles outside the village of Gillamoor, deep in the North Yorkshire Moors. With it being a BOAT (byway open to all traffic) there’s no gate; I simply turn onto the rough track and hope for the best. 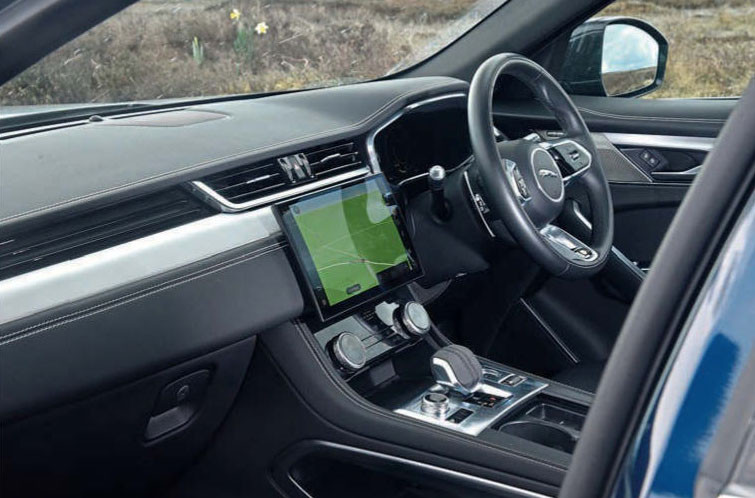 At ten miles long, it makes Rudland Rigg one of the longest green lanes in the UK. But thanks to its gravel-covered surface, it’s supposedly one of the easiest, making it perfect for a SUV that’s more about the ‘sport’ than it is the ‘utility’. Note the word ‘supposedly’… 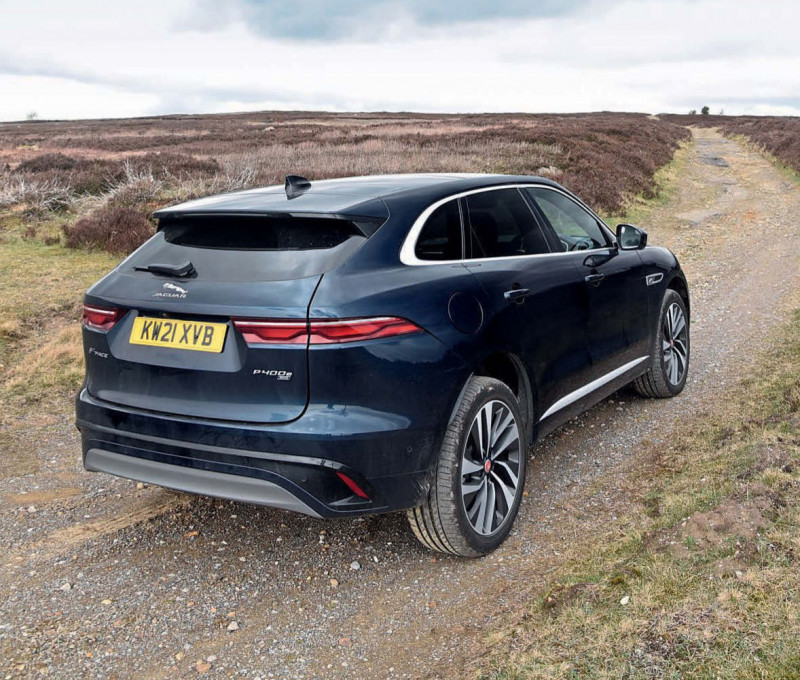 To begin with the going is easy and despite the steep incline the car makes light work of the rough surface and loose gravel. Worried about damaging the road tyres on the sharp stones, I take it slowly, so slowly in fact that I’m still running on electric power only.

Since this F-PACE R-Dynamic SE is a P400e it’s powered by Jaguar’s 2.0-litre turbo four-cylinder 296bhp Ingenium petrol engine together with a single 141bhp electric motor. But unlike the I-PACE that has a motor on each axle, in this PHEV (plug-in hybrid electric vehicle) version of the F-PACE, it’s attached to the car’s eight-speed automatic transmission.

The engine and the motor work well together, giving a surprisingly impressive punch – 60mph is reached in just five seconds and there’s a surprisingly fruity exhaust note. But push the throttle too hard or too often and it quickly uses the battery.

The electric motor is more about aiding economy than performance and Jaguar reckons the P400e will return between 49-57mpg depending on the size of the tyre. But according to the trip computer, the best I could achieve during the time I had with the car was 38. Admittedly the XF 2.0D MHEV (mild hybrid electric vehicle) I drove to the top of Scotland last year returned 45mpg, but with petrol being much cheaper than diesel it results in the two cars having similar running costs.

At slow speeds the car runs on electric power only, the petrol engine kicking in at 2,000rpm. There are three driving modes – EV, Hybrid and Save (which runs on petrol only to save the battery) – and in the electric mode the range is supposedly 33 miles, but I never saw higher than 27. Still, topping up the 17.1kWh battery pack takes an hour and a half from a 7kWhome charge, only a little longer with a domestic three-pin plug. The battery can’t be recharged by the engine but it can by regenerative braking. Yet I found this to have little impact; later that day I braked all the way down the famed mile-long Sutton Bank and its steep, 1-in-4 gradient but the range wasn’t extended.

When in EV mode, the F-PACE PHEV isn’t as fast as the I-PACE with its twin electric motors but it’ll still cruise at 70mph comfortably on the motorway. And as I’m discovering, has enough torque for off-roading. The F-PACE doesn’t have anything as archaic as the option of a transfer box to manually engage four-wheel drive – when the car’s Intelligent Driveline Dynamics system detects more traction is needed, it sends whatever torque is required to the front wheels. And neither is there a high/low ratio box or a lockable diff’, but it does feature plenty of modern equipment to make my attempt at off-roading credible. Central to these is a rain/snow/ice mode for the transmission that dampens the shift points of the eight-speed automatic gearbox, meaning acceleration is controlled to help avoid skidding.

It has other, more passive equipment, too, such as cameras at the front and rear, plus mounted in the wing mirrors that create a 360-degree downward view on the large 11.4 touchscreen (which, together with a new gear selector, arrived as part of the 2020 refresh), which is useful to make sure I don’t damage the handsome 19in split-spoke alloys on a verge or rock. The F-PACE’s basic design also aids its off-roading abilities; as I approach a small hump in the track, I worry its steepness will rip the bumper off. But thanks to the shortness of the car’s front overhang, which gives the car an excellent approach angle, I’m able to crawl up and over safely. Admittedly this doesn’t make it a Land Rover, but it’s better than some modern SUVs such as the Audi Q3 and Porsche Cayenne whose front overhangs are longer than the Titanic and on an uneven track like this, just as doomed.

After reaching the top of the ascent, the view becomes a never-ending sea of brownness with only a few patches of yellow gorse to brighten the scene. Covering 554 square miles and largely empty, the North Yorkshire Moors is one of the most desolate places in England; I reckon it’s wilder than the nearby Dales and definitely bleaker than my hometown of Darlington.

The area was designated a National Park in 1952 and due to its remoteness has become popular with ramblers, mountain bikers and, thanks to several green lanes that criss-cross the moors, off-roaders. The three don’t always mix well, though, with many walkers complaining SUVs produce too much noise and can damage the environment. With the F-PACE still in EV mode, it’s quieter than a Radio 4 discussion on gardening, meaning this isn’t a complaint that can be thrown at me. I am, though, careful I don’t damage the fragile countryside and stick to the trail that’s been dug into the moorland. Due to the heavy rain that fell across Yorkshire recently (and by recently, I mean since January), the surface of the track has changed; with nowhere for the water to drain away to, it’s now muddier than a Seventies football pitch and the road tyres are starting to struggle. There are also deep, water-filled potholes either side of the track which, thanks to their unequal spacing, are giving the articulation of the axles a proper work out. Since the F-PACE doesn’t have air suspension like most Land Rovers that can be raised for more ground clearance, one wrong move and the exhaust will be ripped off to create an even fruiter note.

Yet amazingly the car doesn’t ground out and I’m able to head deeper into the moors, the satellite navigation map now a big, green block offering less detail than my history GCSE exam.

The next obstacle is an incline so steep and uneven even a rally driver would look for an alternative route. The only way to get down safely is by using the final weapon in the F-PACE’s off-road arsenal, the All Surface Progress Control (ASPC) mode. A slow-speed cruise control, which after setting it to 5mph, I don’t need to touch the brake pedal and despite the trickiness of the conditions I eventually negotiate my way to the bottom. It’s here where things get tricky. Much boggier than when I started, it soon becomes obvious by my lack of progress that all four wheels are stuck. I still don’t move, even when the 2.0-litre engine kicks in. Worried I’ll be here forever or, worse still, need to ask a sarcastic farmer for a tow from his ‘proper’ 4x4, I select reverse, manage to find some grip to slip and slide my way free. It’s a close call so I reckon it’s time to call a halt on my daring green lane adventure and start my way back to civilisation. I might have travelled a mere five miles but I haven’t had a journey this awkward since the time one of my college tutors gave me a lift home.

Yet I can’t help but be impressed by the F-PACE’s off-roading abilities. I’m sure a Land Rover Defender could have reached the end of Rudland Rigg, but to travel even this far would have been impossible in a standard saloon, at least one you care about.

I might have made some dodgy life choices recently but thanks to its abilities on and off the road, if you’re considering an SUV, then the F-PACE P400e won’t be one.

*When combined with the electric motor