The facelifted XK8s from 2003 onwards were the best of the bunch thanks to Jaguar’s new 4.2-litre V8 – and in non-R format they’re a terrific bargain that still come with plenty of clout.

The bigger, the better

A profile of the facelifted XK8 from 2003 that received several important updates, including the 4.2-litre version of Jaguar’s V8

With all the hubris surrounding the launch of the new XK8 (or Project X100) in 1996, it was easy to overlook some of the car’s weaknesses. After all, here was the first new Jaguar sports car in over two decades, and it made the outgoing XJS look about as dynamic as a canal barge, even if it did still use some of its architecture under the skin. 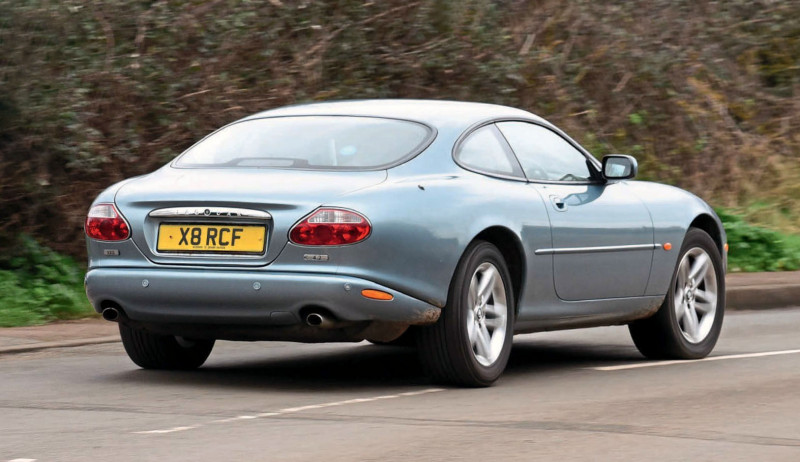 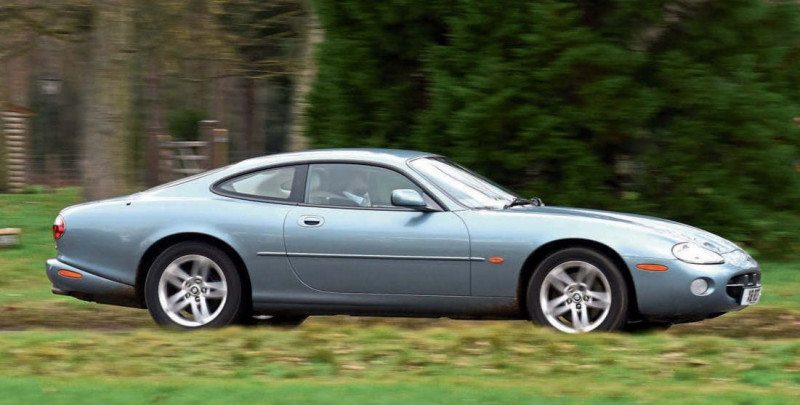 It was universally well-received. The motoring media loved it, Jaguar traditionalists made noises about it being a modern-day E-type and customers flocked to Jaguar showrooms in their droves. As well as the stunning styling, which looked as appealing in hardtop form as it did as a convertible, the XK had a new powertrain in the form of a 4.0-litre engine – the AJ-V8 – and a five-speed electronically controlled automatic transmission. It was a decent set-up, at least at first.

But the AJ-V8 wasn’t without its problems. Whilst the only early criticisms of the XK8 centred on some of its Ford-sourced switchgear and its on-limit handling ability, the latter of which would only be explored by a handful of owners, the engine later became its biggest bugbear. The original engines had aluminium bores and Jaguar chose to coat them with nickel silicon carbide (Nikasil) as it was a tough, friction-reductive material that had been proven in high-performance motorsport applications. Lighter than steel and more advanced, the hard ceramic compound should have lasted the life of the engines but it soon became apparent Jaguar had a problem. 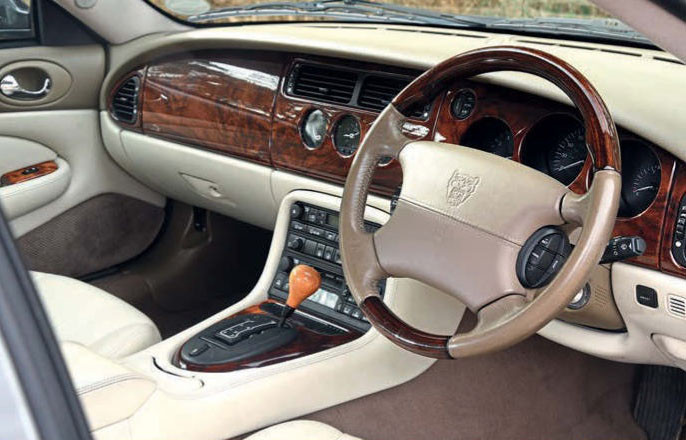 Within three years it was receiving reports of reluctant starting, power loss and vibration, along with excessive oil consumption. The problem lay with the sulphur in fuel leading to formation of sulphuric acid within the XK8’s cylinders. The sulphuric acid ate away at the Nikasil lining, allowing the piston rings to score the cylinder walls and led to low compression. It resulted in Jaguar replacing many if not most of the AJ-V8s under warranty, on both the XK and the XJ saloon models – and a rather large expense for the corporate balance sheets.

The problem was cured in August 2000, with the introduction of a new steel-lined block to replace the Nikasil liners, but this did come at the expense of weight and performance – something that Jaguar’s engineers immediately began to address. The solution came in mid-2002 when the new 4.2-litre V8 debuted, initially in the S-TYPE saloon where it would be a low-volume variant, the V6 generating the lion’s share of sales across Europe. Jaguar was once bitten, twice shy, so it took a further nine months before it offered the 4.2-litre unit in any other models, as the lower-volume car was seen as the perfect testbed to iron out any issues.

The engine was based on the 4.0, but with bigger bores and a new duplex timing chain arrangement with a revised tensioner set-up, addressing the other reliability issue that was inherently a problem for the original unit (plastic components in the tensioners and guides could fracture and break off, which were replaced on the 4.2 with steel). It was engineered to address all of the 4.0’s issues, but Jaguar proceeded with well-advised caution.

The engine appeared after the S-TYPE in the new X350 XJ saloon introduced in early 2003, and soon after that was offered in the facelifted XK revealed at the 2003 North American International Auto Show for the US, and in Geneva for Europe. Fans of the XK had been waiting impatiently, with sales in 2002 dropping off sharply in anticipation of the expected new powertrain. The situation rebalanced in 2003, when the model enjoyed its strongest-ever sales year.

The new 4.2-litre V8 (now known internally as the AJ34 AJ-V8) was not only larger than its 4.0 predecessor, with a bore and stroke of 86.0/90.3mm compared to the 4.0’s 86.0/86.0mm, but it was more powerful, up from 296 to 300bhp. Torque increased, too, from 290 lb ft to 310 lb ft. The AJ34 was developed at the Jaguar Engineering Centre at Whitley in Coventry and retained the same compact, 90-degree V8 dimensions but was structurally stiffer. The capacity was increased to 4,196cc, with a ribbed block and cylinder heads. It used a four-throw, six balance-weight crankshaft, supported by five main bearings and connecting rods featuring fracture-split big-end journals, improving mechanical refinement and reducing vibrations.

The AJ34 also came with Continuously Variable Camshaft Phasing. A hydraulic actuator on each inlet camshaft was operated by a pair of electronically switched oil-pressure control valves, activated by the engine control module which contained maps of engine speeds and loads. The system continuously adjusted the phasing of the camshafts, from maximum advance to maximum retard in less than 0.7 seconds.

A new drive-by-wire throttle set-up and modified fuel injection for reduced-emissions and greater efficiency sealed the package, which saw no price increase for the XK8 at £48,700 for the coupe or £55,300 for the convertible.

At the same time as the engine changes, the automatic transmission was also revised with a new six-speed ZF 6HP22 unit replacing the older five-speeder, while the J-Gate was modified to accommodate an extra position so the ‘box could be used manually from second gear through to sixth. Performance was increased, too. The extra power and reduced weight saw the 0-60 time improve from 6.5 to 6.1 seconds, though the XK’s top speed remained limited to 155mph. Changes were also made to the traction control system to make it less intrusive and to the Computer Active Technology Suspension (CATS), while emergency brake assist was standardised.

Otherwise, improvements were subtle. Inside, the seats were redesigned and were made 12-way adjustable instead of ten, and the gearlever was made chunkier and trimmed in leather. Outside, new wheels were offered and Xenon headlamps were now standard.

The result, as driven here, was a car that evolved the XK8 rather than revolutionised it, with a welcome package of what were essentially refinements added to an already beguiling starting point.

Driving the 4.2 back-to-back with a 4.0 is the best way to appreciate the changes. The nuances in throttle response (it’s much In X100 XK8 terms, it’s still the best choice livelier off the mark due to the electronic throttle) and the smoother drivetrain are instantly noticeable. It’s quieter, too, while the improved performance is most noticeable in the mid-range thanks to that low-down torque response. The transmission is sharper as well. It responds electronically to your driving style, holding gears until the red line if you’re pressing on, but maximising efficiency if you’re cruising gently.

A few years ago, the 4.2 would have been the default recommendation for any XK8 on the basis of its improved reliability, but today the balance has been restored. The early cars are purer, simpler, more collectable as a result of their proximity to Jaguar’s initial vision and Fergus Pollock’s original design. And in today’s market, the vast majority (if not all) will have steel-lined engines and improved timing chain tensioners, which make the reliability concerns of earlier cars a thing of the past. As a result, they’re not the cheap GTs they once were. The 4.2s were never cheap. While there was a time when you could snaffle a 4.0 XK8 coupe for as little as £2,000, the 4.2 never dropped that low, nor will it ever. It was a better car, regarded as such by the trade and the automotive media, which kept values higher for longer, and today a good example remains a highly desirable thing.

In X100 XK8 terms, it’s still the best choice. It’s more usable, faster, stronger, better equipped and has a better gearbox. With early models on the rise and XKRs commanding the hefty premium they always have, a non-supercharged 4.2 is a real gem and is worth seeking out. 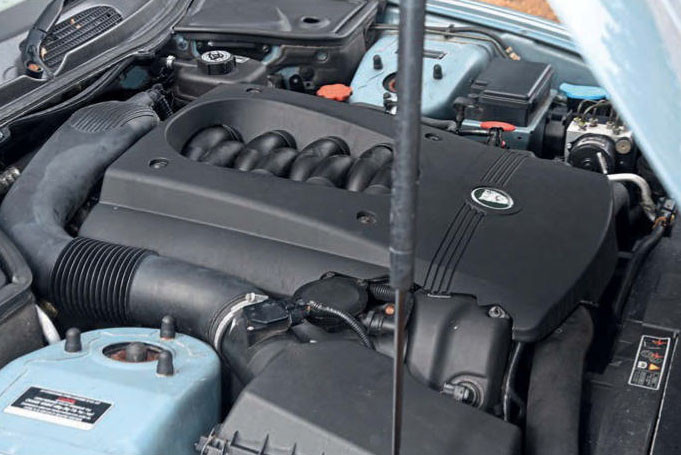 RIGHT: The 4.2-litre – seen here in supercharged from– was based on the 4.0 but with bigger-bores and revised tensioners