With its 1000hp powertrain, the SF90 hybrid is the most potent road car Ferrari has ever made. We strap ourselves into the Assetto Fiorano version and experience a world of true extremes.

Fun in a Thousand 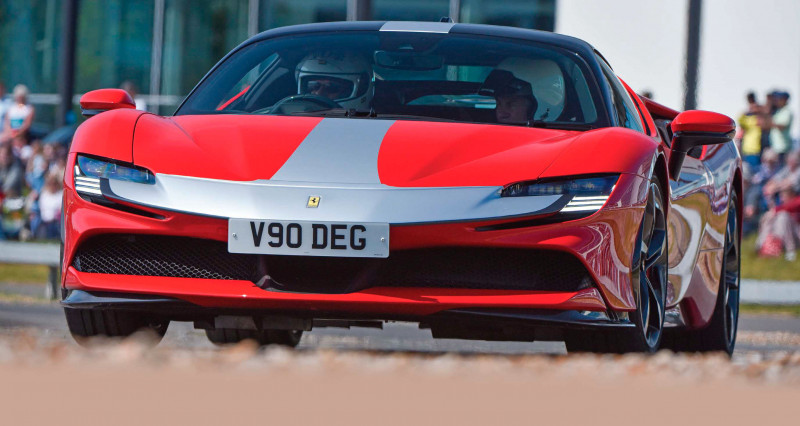 What’s this? The front wheels are chirruping, scrabbling for grip. Yes, you heard that right: I’m driving a Ferrari and the front wheels are spinning. Every SF90 Stradale owner will experience this novel sensation; it might even be the very first thing they experience. Because Ferrari’s first all-wheel drive hybrid starts off, in default, on battery power alone – in which mode, the drive goes only to the front wheels. And yes, on cold tyres, you get front wheelspin. Driving the SF90 is a novel experience on so many levels. This is just one novel moment at one extreme end – the low-speed end – of what the SF90 can do. Having now spent five days with this car, both on and off track, I’ve got to know it well enough to appreciate that it’s one extraordinary – and extraordinarily extreme – machine. 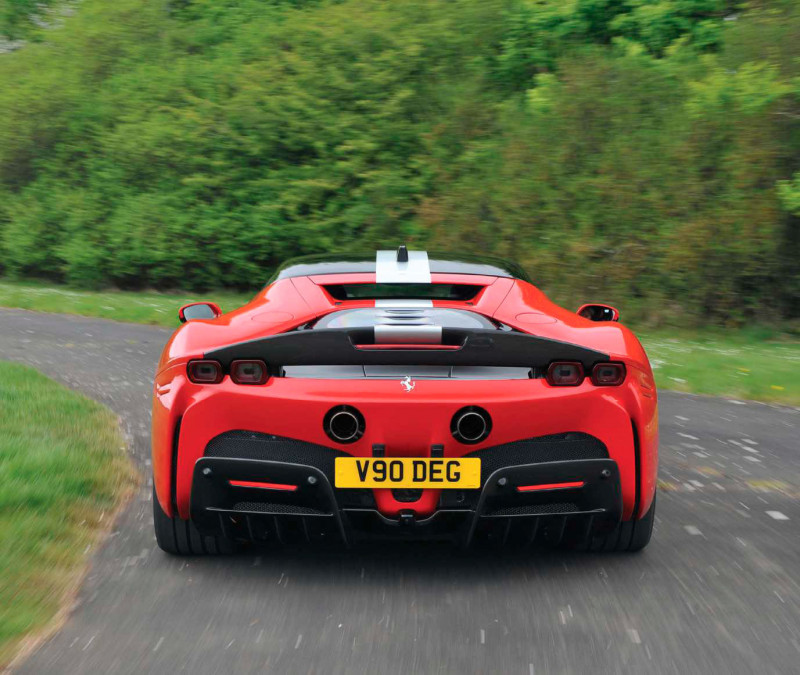 On launch, all hell breaks loose: you feel like you’re being flung off a cliff with a jet pack strapped to your back

Not that it looks particularly extreme, in contrast to the bristling aggression of its closest rival, the Lamborghini Aventador. Almost everyone loves the Ferrari’s looks, which manage to combine drama with elegance and superb proportions. While it’s clearly identifiable as a Ferrari, there are some nuanced novelties, such as the horizontally arrayed headlights and squared-off rear lights. Our car’s Rosso Corsa paint looks absolutely right, even if not a single person I encountered cared for the optional stripe package.

So exactly what are we driving? It’s an SF90 Stradale coupe – there’s an open-topped SF90 Spider, too – with the Assetto Fiorano pack fitted (now renamed ‘Fiorano Performance Pack’ for English-speaking markets). This optional track-focused setup consists of Multimatic dampers, lightweight carbon for the doors and floor, titanium springs/exhaust and a bigger, high-downforce rear wing.

The SF90’s headline-grabber is, of course, that it provides you with fully 1000hp under your right foot. That’s more than any roadgoing Ferrari ever. It gets to this extraordinary figure by using a wide-bore version of the F8 Tributo’s V8 turbo engine (raising capacity by 100cc to 4.0 litres), resulting in a best-ever Ferrari V8 power output of 780hp. In addition, there are three electric motors – one at the back, two up front – that together deliver an extra 220hp. Maths ain’t my strong suit, but even I can see that adds up to a neat 1000hp. Driving the car in ‘eDrive’ electric-only mode feels very weird. For starters, there’s no noise. Then there are the front-wheel scrabbling antics just mentioned. Your range with a fully charged battery is a mere 15.5 miles. And with 220hp, performance is hardly Ferrari-like (0-62mph in 9.3 seconds…). No, EV mode is best kept for sociable start-ups or driving emissions-free in town. You can plug the car in for a couple of hours to recharge it or – what everyone will actually do – drive it with the petrol engine on for a couple of miles to boost the battery. That means you always have that 220hp boost when you need it. If indeed anyone ever actually needs 1000hp…

In regular use, you’ll probably use default ‘Hybrid’ mode a lot. This defers to electric power surprisingly frequently if you drive gently, and is also surprisingly refined. This sense of easiness is boosted by a much more composed ride than I was expecting. In truth, the SF90 never really sounds as extreme as its 1000hp headline figure suggests, even when you get tempted by the ‘Performance’ and ‘Qualify’ modes awaiting on the steering wheel, which give you more power and sharper responses but not a significantly amplified soundtrack.

The SF90 has automatic transmission – as have all Ferraris since 2011 – with a new controller that evocatively imitates a classic manual gate. It all works very well, and if you want to pootle around in full-auto mode, you’ll be treated to a surprisingly easy drive – comfortable, even. Me? I’m in manual mode and paddle-shifting as often as possible; it just seems to suit the car’s nature.

One of the gear gate positions is innocently marked ‘L’. Therein lies another of the SF90’s extreme party pieces, for L stands for Launch. If you ever want to display to your mates what the SF90 can do – and let’s face it, isn’t that what you buy a car like this for? – please give it a go. Switch to Qualify mode, select Manual and ‘L’ modes on the gear selector, lean your left foot on the brake pedal and flatten the accelerator pedal with your right. Now watch as the rev counter flicks around to 4000rpm, priming everything ready for you to lift off the brake. As soon as you do, it’s like lighting a rocket in a fireworks factory. Almost literally, too, since as soon the car catapults off the line, the gearchange lights zipping around the steering wheel are absolutely insisting you change up gear – now! Then all hell breaks loose as you’re seemingly flung off a cliff with a jet pack strapped to your back. The 0-62mph time of 2.5 seconds seems irrelevant; the 0-124mph time is what this machine is all about: astonishingly, it’s just 6.7 seconds.

Thing is, even as your speed increases, seemingly exponentially, you never feel like you’re really bothering the SF90’s true capabilities. At 100mph, it feels like it’s just waking up. What’s truly impressive is the way the electric motors completely fill any turbo lag the V8 has, delivering astonishing acceleration at any speed, at any revs (yes, even as low as 1000rpm). Frankly, there’s more power and torque available than you could ever deploy on public roads.

I decided to perform my launch control move with the manettino in ‘CT-Off’ mode (eased-off traction control) so that I could hopefully feel more of what’s going on. While you do feel some scrabble – with 1000hp, it would be amazing if you didn’t – the electronics clearly and cleverly work to deliver unbelievable grip. And grip is something the SF90 does astonishingly well. As Ferrari’s first ever four-wheel drive midengined car, traction is crushingly good. The feeling of torque being fed through the front wheels is decidedly odd to begin with, and on track I sensed a little understeer on tight lowspeed corners. But this is instantly dealt with by an array of tech, like torque vectoring, active damping and side-slip control. With the manettino in ‘Race’ mode, you’re very unlikely to experience oversteer, so you can be very quick yet very confident, even if you’re not a driving god. Switch to ‘CT-Off’ and the SF90’s true accomplishment becomes clear: it still feels benign, with oversteer and four-wheel drifts achievable thanks to a clever safety net keeping you on line – at least as long as you’re half-way sensible as you feed the power in out of each apex.

One caveat is that we had entirely dry weather for our test. I’ve previously experienced an SF90 in the wet and it can be, let me say, something of a handful. Circumspection and respect are required in serious quantities. That’s the only occasion on which the SF90 feels intimidating. Otherwise, it’s exceedingly easy to drive – and drive fast. The brakes are epically strong, too, avoiding that inconsistent pedal feel that some hybrid cars suffer from.

The cabin is superb. Our car had optional carbon racing seats that combine supportiveness with decent comfort, even if you have to faff around with racing harnesses. Things I love: the crystal-clear configurable digital instrument binnacle; the head-up display; the easy driving position. Things I like less: the touch-sensitive controls that take a long time to work out (especially if you’re used to driving a traditional Ferrari); and voice control that thinks you’re talking to it every time you say ‘Ferrari’ (which is a lot).

Another extreme side of the SF90 is its packaging. There’s no getting away from the fact that this is one hefty machine. The official weight is 1570kg but since Ferrari always quotes dry figures, it’s a fair bit more once you’ve added fluids and a driver. The Assetto Fiorano package shaves 30kg off the weight but to put that in perspective, that’s less than 2% overall. And there are times when you feel the SF90’s voluminousness. It measures fully 4.71 metres long and almost two metres wide. The curse of all supercars – poor visibility – is ever-present. The Assetto Fiorano pack also deletes the nose-lift system to save weight, so care is needed over speed humps and the like. And luggage space? Forget it. I couldn’t even fit my crash helmet in the boot.

I feel I have to address one elephant in the room: Ferrari’s 296 GTB V6 hybrid. This newcomer is smaller, almost as powerful, more reactive, sounds better and is probably a car you’ll have more fun with in 99% of circumstances. But hey, it doesn’t have the ultimate grip, nor the bragging rights of a thousand horses, that the SF90 gives you. In some ways, this car of extremes is the ultimate Ferrari. Yet what amazed me during my time with it was just how easy it is to drive. Seriously, anyone could pilot it. I even think that almost anyone could explore 90% of what the SF90 can do in complete safety. For that extra 10%, it deserves to be taken on a track to experience just how capable – how extremely capable – it is. Then you can relax in the knowledge that, shy of a LaFerrari, you own the fastest road car that Ferrari has ever made.

Assetto Fiorano pack adds lightness, downforce and carbonfibre. We could live without the stripes, though. Having this much power is frankly too much to exploit on public roads. On track, though, it’s amazing.

Epic all-wheel drive grip is something the SF90 delivers in spades, even with 1000hp to play with.