The highly anticipated SA-built Isuzu D-Max has officially arrived in SA and we drive the flagship V-Cross.

After enduring the flurry of teaser images that led to the extravagant reveal of the box-fresh Isuzu double-cab bakkie in 2020, we’ve now had the opportunity to drive the Japanese brand’s latest offering. The local launch took place on the Garden Route. We met up with the vehicles in Gqeberha before traversing both highway and spectacular wet, muddy and heavily rutted off-road mountain tracks to Knysna. 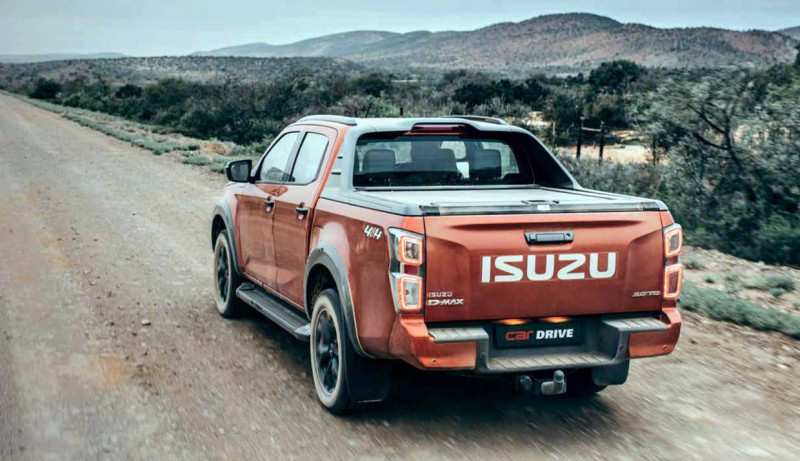 South Africa is undeniably a bakkie-besotted country so whenever a new model is released into the market, a big fuss is made whatever the brand. For many, however, this Isuzu is the bakkie they’ve been waiting for. The top two spots in the local market is closely contested between the Toyota Hilux and Ford Ranger in terms of units sold. 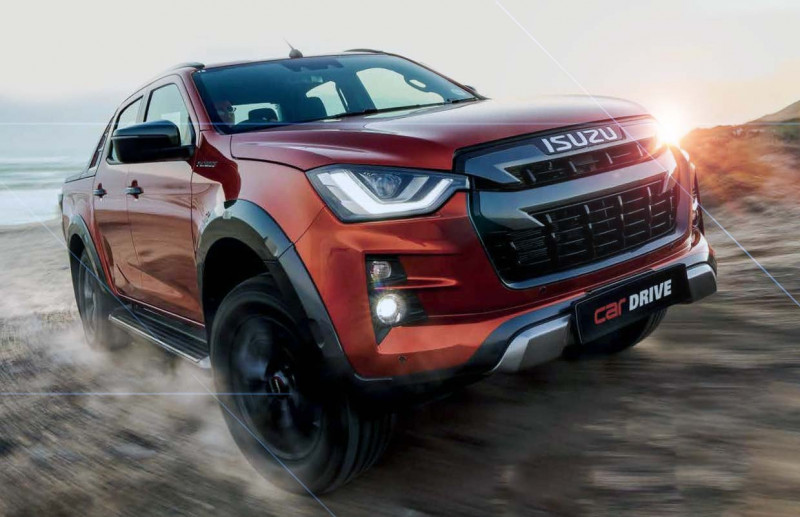 The D-Max – like an on-form Temba Bavuma – has played a consistent role at number three. This locally built seventh-generation D-Max (previously KB) has a lot riding on its success. In terms of the design, this new bakkie is a far departure from the model it replaces that felt oldschool.

Under the skin, it’s new and should continue to meet buyer demands considering Isuzu’s reputation for durability and reliability. The body construction, ladder frame and suspension have been tweaked for improved rigidity and better ride comfort and handling. Adding to the tough reworked underpinnings and the tried-and-tested engine (4JJ3-TCX) is the 1 898 cc motor that replaces the 2,5-litre.

The fresh exterior design hits the mark with a bold and imposing face. The flagship song-and-dance 3,0 TD V-Cross model we sampled comes with all the bells and whistles as standard. These include leather seats with eight-way power adjustment, Isuzu’s full suite of advanced active driving safety features and eight airbags, and it is differentiated from the rest of the range with a roller shutter, gun-metal finishes for the grille, fender flares, door handles, mirror caps, roof rails and the distinctive hooped sports bar.

The V-Cross can be directly compared with the Ford Ranger Stormtrak and Toyota Hilux Legend RS, yet these rivals cost R42 500 and R103 200 more respectively.

Climb inside and it should feel familiar to anyone who has recently been inside the new Mazda BT-50. Built as part of a platform and drivetrain-sharing deal, the two are almost identical and share much of their interior trim but they sport markedly different exterior designs.

Thankfully, the D-Max suspension has been specifically tweaked for South African traffic and terrain over some 700 000 km of local testing.

The seats are a highlight; superbly comfortable yet well bolstered for support while tackling rocky sections. The multifunction steering wheel is wrapped in quality Nappa leather and offers adjustment for both rake and reach, which makes finding the ideal driving position a cinch.

Those who spend lots of time behind the wheel will appreciate the well-considered cabin. It includes extra cupholders below the air vents, a specific cellphone area underneath the centre stack, a dash-mounted storage compartment, large door bins and air vents for rear passengers. The ladder-frame design does not steal rear legroom too much as I could happily sit behind my own laidback driving position. Underneath the chiselled bonnet is a 140 kW, 450 N.m version of Isuzu’s 3,0-litre turbodiesel. It’s a proven unit and has been tweaked for improved refinement, mated to an Aisin sourced 6-speed automatic transmission that smoothly slushes between the gears. Out on the open road, the motor feels relaxed and with maximum torque available from as low as 1 600 r/min, it makes effortless progress at the speed limit.

We had the opportunity to put the D-Max through its paces off- road across a rough 70 km stretch of slippery and potholed gravel track between Avontuur and Knysna. The R339 took us over the spectacular Prince Alfred’s Pass that runs up the side of the Outeniqua Mountains. Here we used 4H for most of the time to maximise traction as it was wet and some of the dongas were deep and rocky. The D-Max sailed through these obstacles. I’m certain that with an aggressive set of all-terrain tyres, it’d be formidable out in the bush. The formalities had run late earlier in the day so the gravel drive was a fast-paced affair.

After a quick drive, it’s clear the new D-Max’s drive feels as solid as you’d expect. The ride is more forgiving and refined, it offers a high level of specification and keen value while retaining its proven 3,0-litre engine.

It lacks some on-paper performance when you compare it with the 157 kW/ 500 N.m bi-turbo Ranger and 150 kW/ 500 N.m Hilux; however, the on-road performance is more than sufficient.

The low-stress drivetrain will keep its fans coming back, and that purposeful design should garner attention from new potential buyers.

We look forward to soon having the D-Max back for its full road test.

01 At 5 333mmlong and 1 810mm tall, the D-Max is one of the largest double-cabs around. 02 There is no denying the imposing nature of the new design. 03 Bi-LED headlamps add to the on-road presence. 04 Panel gaps between the body and tailgate have been tightened.

Before the official launch of the new Isuzu D-Max, the manufacturer has announced it will implement a dual product strategy. la Volkswagen Polo Vivo and Nissan NP300. Both products are built at Isuzu’s vehicle assembly plant in Gqeberha where it currently produces the sixth-generation D-Max, the new seventh-generation D-Max, and Isuzu trucks. Dominic Rimmer, senior vice president, Technical Operations at Isuzu says, “Our strategy is to support Isuzu’s objectives by retaining the sixth-generation models, which have performed very well in the workhorse segment of the market. In addition to boosting our fleet business, we intend to increase LCV exports into key left- and righthand- drive markets within the rest of Africa.”

Offering greater value for money, five models of the sixth-generation D-Max will be offered in South Africa. Seven models – a combination of right- and left-hand drive – are to be shipped to export markets. Two powertrain options are available for the sixth-generation D-Max: the 2,5-litre petrol engine, which delivers 58 kW at 3 900 r/min, and 176 N.m at 1 800 r/min; as well as a higher output engine, which offers increased performance with power rated at 100 kW at 3 400 r/min, and 320 N.m of torque from 1 800 to 2 800 r/min, offered in both 5-speed manual and 5-speed automatic guises.

— interior tech not as intuitive as the best in the segment

Will that 3.0 DMax be avalaible in Madagascar soon ?