Doing things like everyone else does is all very well, but that’s never been Daniel Orwin’s Flava…

There’s nothing wrong with playing it safe, but sometimes it’s nice to go wild, and this R58 Coupé does exactly that. 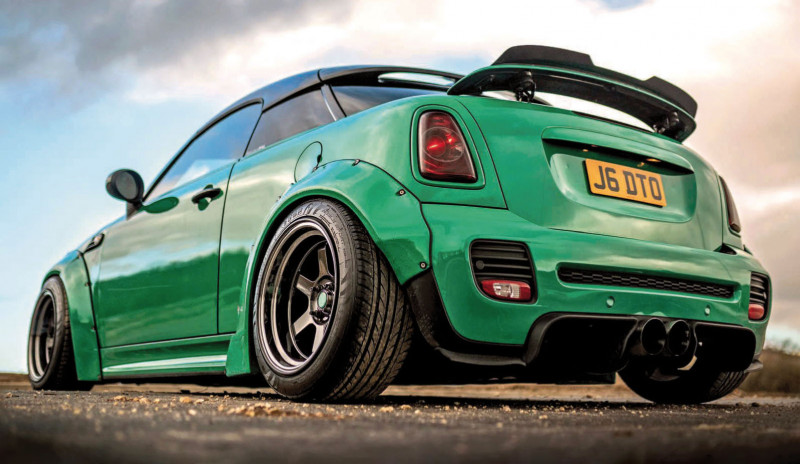 There’s nothing wrong with mundanity if that’s your bag. Some people just don’t want the hassle of thinking about things too much, so they go with the mainstream and move on to the next decision. These are the people who paint the interior walls of their houses in default magnolia to save choosing a colour. They stick on a bit of Coldplay when they’ve got mates round because they just want a generic background noise they can ignore; who pave over their gardens because flowers and shrubs require decisions to be made. Their lives are simple, uncluttered. They’re also not very interesting, though, are they? Where’s the satisfaction in living an unremarkable life, never having the imagination to rock the boat? You’ve got to roll the dice a little, do unexpected things, get tongues wagging. Look at the case of Daniel Orwin, for example. His day job as a chef involves stirring diverse ingredients together to create exciting new fusions and melanges, so it’s no surprise that this behaviour has bled out into other areas of his life. And he certainly wasn’t about to mod a car in accordance with the rule book. 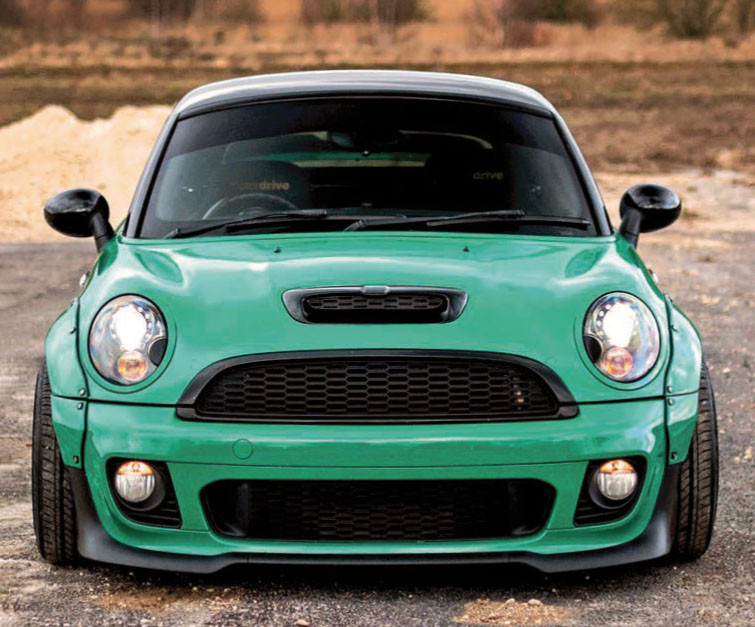 It was always bound to be a MINI as well. For Daniel, this was something that stretched back through his youth. “I started driving seven years ago, and MINIs were something I wanted right from the start,” he explains. “My mum’s always had MINIs, which probably has something to do with it – she’s on her 13th now!” Despite this admirable passion for the archetypal Oxford/Bavaria fusion, Daniel’s had a pretty diverse spread of projects before this one. His first car was a Vauxhall Corsa (no judgment, many of us have been there), and this was variously followed by a BMW E46 330Ci, which was stripped out for track mischief, and a full-on track spec Renaultsport Clio RS200… but yes, there have been other MINIs before this one as well. There was an R56 Cooper S, and an R56 JCW – so why an R58 Cooper S this time? “You just don’t see many of them around, and I wanted to do something different,” he shrugs. “I have never seen a modified one, so I decided that’s what I wanted to do with it!” 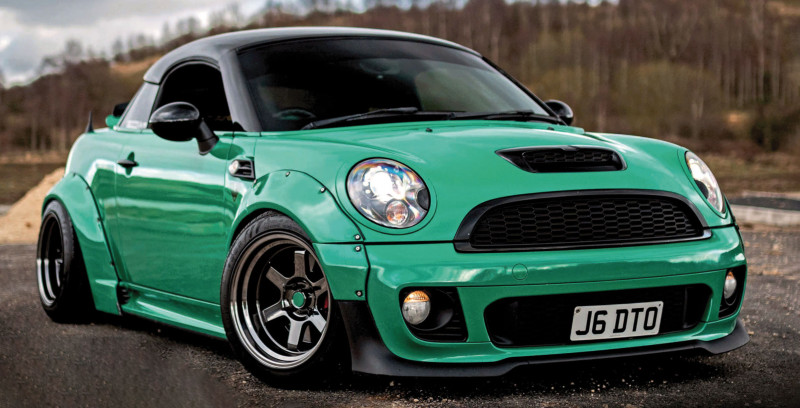 The car was found at a dealership near London, in generally great condition aside from the inevitable lacquer peel that comes with the territory with Chili red. “I’d wanted to wide-body a car for a few years but never done it, so it felt like the time was right,” he continues. And with that, the Coupé’s fate was sealed.

There was a bit of belt-and-braces to take care of before this could happen, however. Job one – as is generally the case for most people – was to sort the suspension. Knowing that going wide-body was the long-term game-plan, the intention is to, ultimately, get the car on air-ride, so instead Daniel opted to get the car sitting static on a budget to begin with. He fitted a set of Raceland coilovers, added an OMP strut brace for stiffness, and brought in some Silver Project adjustable top mounts to help get everything dialled in just so. 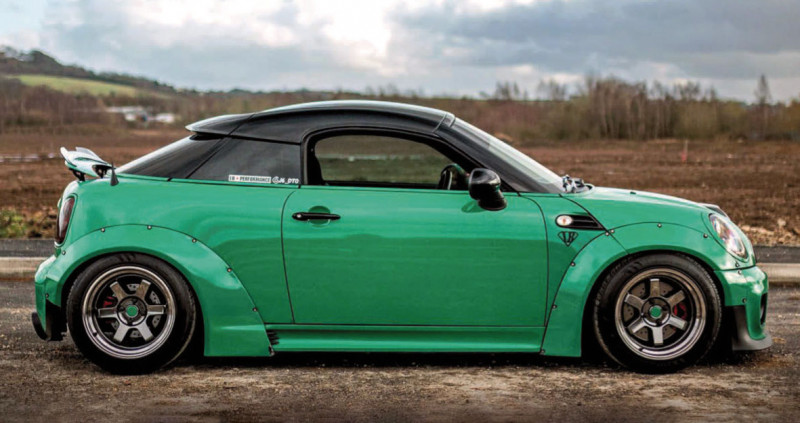 “I then chose to get some Motordrive bucket seats, as I prefer them to the standard lounge seats from the factory,” he says, “and I haven’t changed anything else inside as I like the cabin the way it is.” This, of course, is a vital element of modifying (and cooking) – knowing when something’s just right so it doesn’t end up overdone. 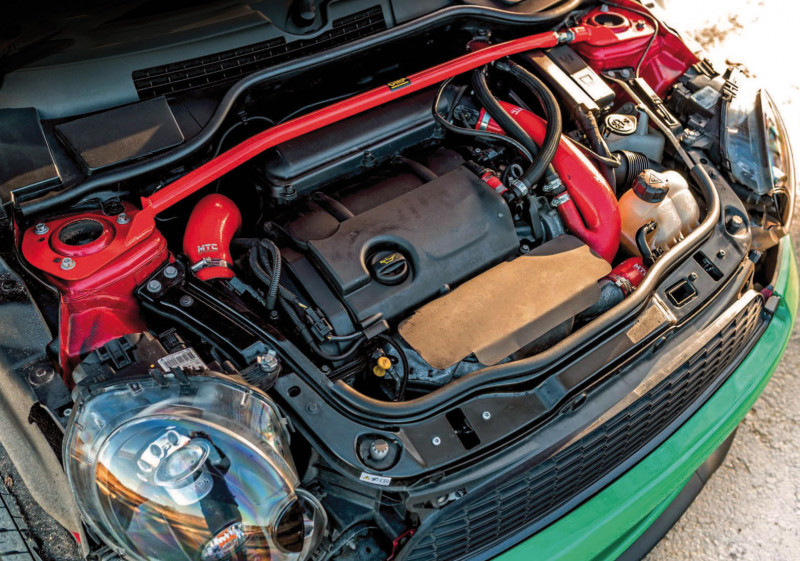 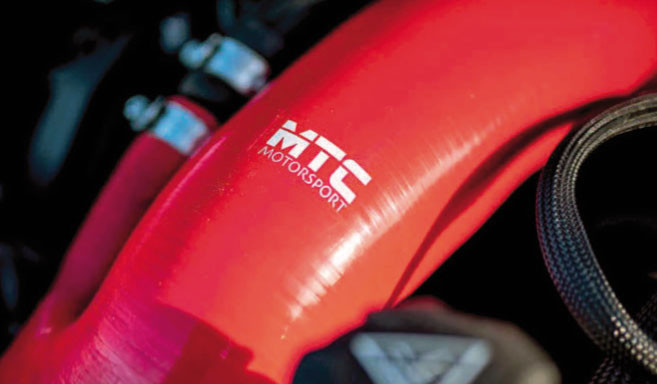 And before he jumped in with both feet to embark upon the radical exterior makeover, Daniel was keen to address under-bonnet matters – both in terms of servicing and maintenance, and power upgrades to lay down a baseline for the next round of upgrades. “I’ve done the important maintenance, such as a new high-pressure fuel pump, proper servicing, and I’ll be doing the timing chain as well.” 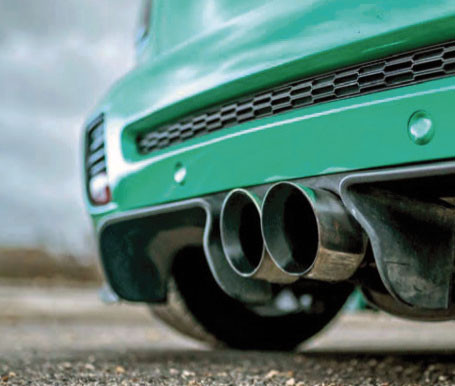 He’s also swapped all the hoses for MTC silicone items, and fitted colder stage NGK spark plugs, an Airtec intercooler, ITG panel filter, Mamba oil-feed/drain kit, along with a sports cat that’ll work hand-in-hand with the custom exhaust system he’s in the process of building. The most impressive addition to the performance lineup, which Daniel fitted himself after the shoot, is the JCW hybrid turbo. With this mounted under the bonnet, the R58 put down a healthy 250hp along with a juicy 258lb ft of torque running a conservative tune, and it’s turned this Coupé into a seriously spicy dish. Now, let’s get into the real meat of this automotive stew: that outrageously green wide-body profile. Turning this vision of verdant bootyliciousness into a reality was an entirely homespun affair, and to achieve it Daniel needed to cock an eye eastwards. 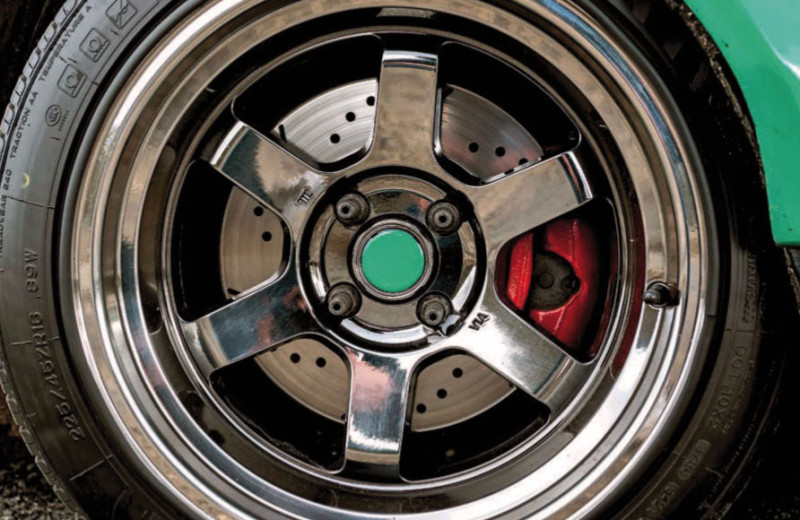 Japanese outfit Liberty Walk may have been founded as long ago as 1993, but it’s the recent exploits of the Nagoya-based company that have pushed it to the forefront of the modern auto enthusiast. They’ve branched out into the USA and beyond in fine style, and love to graft outrageous body kits onto aspirational models like the Lamborghini Aventador and Ferrari 458. This kind of polarising behaviour ensures copious online shares, with a strictly divided audience arguing about whether it rocks or it sucks. 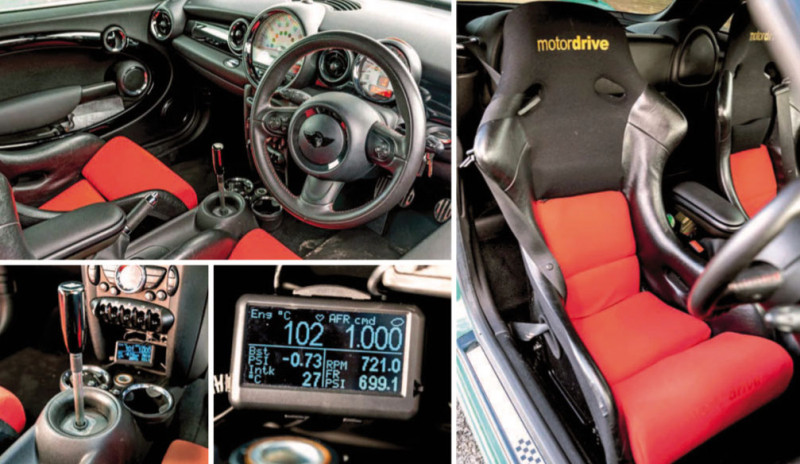 But this isn’t all just a PR exercise – Wataru Kato, Liberty Walk’s founder, is keen to keep the operation true to his original vision of ‘bringing out the uniqueness of each vehicle, for the owners to feel engaged on a personal level’. The two key brands under the umbrella fulfil this at different levels – LB Performance ticks the supercar box, while LB Works applies that headline-grabbing aesthetic to cars more in the reach of the man on the street.

It’s at this latter-end of the spectrum that you’ll find a wide-body kit for something that’s far more comfortably within our wheelhouse: the R56 MINI. Of course, an R58 Coupé is a conceptually different entity to an R56 hatchback, but that didn’t slow Daniel down very much. Buying himself an R56 wide-body kit, he fitted it by himself on the driveway at home, finessing the fit-and-finish as he went. Once it was all together, he then went the extra mile by wrapping the Coupé in KPMF Mid Green, again by himself on the drive – impressive, right? The end result is outstanding, and his vision and dedication have led to a proper show-stopper. With great arches comes great responsibility, of course, and you have to consider your wheel options carefully when you’ve substantially pumped up your car’s girth. “I needed a set of wheels with a low enough offset to fill out the arches, as the standard wheels just sat too far in,” he laughs. The rims in question are 16” Rota Grid Vs, with a zero offset and measuring a brutal 9” wide, and the combination of that dishy design and some nice chunky sidewalls has led to a supremely impressive footprint. Sure, it would have been easy to squeeze a set of 19s on rubber bands under there, but we reckon fat retro sidewalls are long overdue a resurgence. “The other wheels I considered getting were a set of WORK Meister SP1s,” he ponders, “and I may yet get some of those further down the line.” Yep, that’ll be a sweet accompaniment to an air-ride setup – but for now, the Coupé’s absolutely bang-on as it is: maximum impact on the retinas, with more than enough grunt to back up the promises made by those outrageous looks.

“I don’t think there’s another Coupé like it in the UK,” he says, and we’re inclined to agree. “I’ve only had the car around a year, and the project will continue into the future.” We can’t wait to see what happens next. After all, it’s already the most vivid and lairy Coupé on the scene; with the magic touch of this unstoppable character, there are sure to be all sorts of unexpected ingredients stirred into the mix.

I’d wanted to wide-body a car for a few years but never done it, so it felt like the time was right

The rims in question are 16” Rota Grid Vs, with a zero offset and measuring a brutal 9” wide, and the combination of that dishy design and some nice chunky sidewalls has led to a supremely impressive footprint.

Liberty Walk kit adds masses of presence N18 has been treated to a selection of performance upgrades, including a JCW hybrid turbo.

He fitted a set of Raceland coilovers, added an OMP strut brace for stiffness, and brought in some Silver Project adjustable top mounts to help get everything dialled in just so.

This R58’s stance and fitment are sheer perfection