The pre-facelift 124-series Cabriolet is a relatively rare model. In South Africa, a local collector offered us the keys to his top-condition 300CE-24 for a sunset drive on one of the most picturesque roads on the continent.

It is hard to believe there was a time when a four-seater Mercedes-Benz cabriolet was not available. But that was the case throughout the 1970s and 80s. At the Frankfurt show in 1991 things changed for the better when the 124-series 300CE-24 Cabriolet debuted. However, buyers had to be patient, as the car only went into series production six months after it was unveiled. This is understandable as Mercedes-Benz had to put it through its usual rigorous development test procedures to be sure of its dynamism and safety. 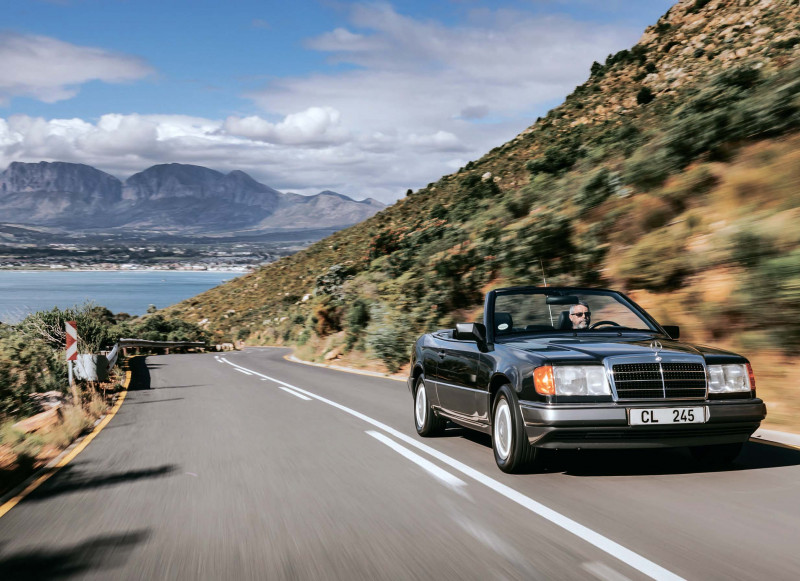 Based in the Winelands town of Stellenbosch in South Africa, the owner of this 300CE-24 Cabriolet has a number of Mercedes in his collection. However, I quickly sense that this ‘A124’ (the ‘A’ denoting a 124-series convertible) is one of his favourites – for various reasons.

Back in the 90s, this particular car was imported to South Africa for the German ambassador who resided in the country’s capital, then named Pretoria. That also explains why it is a left-hand drive car in a right-hand drive market. When the ambassador moved back to Germany, the car was sold and the new owner gave it to his son who lived outside Cape Town.

It was stored in a garage under blankets for years and was rarely driven. It then found its way into the possession of a Mercedes-Benz specialist. He took it upon himself to recommission the car as it needed some work following so little use. The current owner saw the car when the specialist attended club meetings and he always reminded the specialist that if he ever wanted to sell the car to please keep him in mind. The rest is history.

The W124 Saloon is one of the earliest Mercedes-Benz models with the square design theme we associate with earlier models. Even so, the relatively angled lines of this blue-black exterior colour make it stand out. It is unmistakably a Mercedes-Benz. 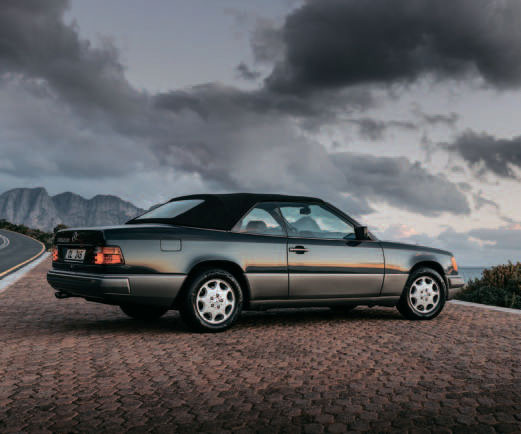 There is no better way to end a weekend than with a sunset drive on a pristine piece of tarmac. The R44 runs through the Winelands to and then along the coast. The road is perfectly tarred and that undoubtedly helps with the smooth nature that the A124 portrays.

Initially in the passenger seat and then behind the wheel, I’m first and foremost reminded of how solidly these cars were made. There are no squeaks or rattles in the cabin, and overall the car feels remarkably fresh. Even over speed bumps the suspension works perfectly and the car feels sturdy. The fact that this Benz is fitted with plump 205/60 tyres on 15-inch wheels helps with bump absorption. 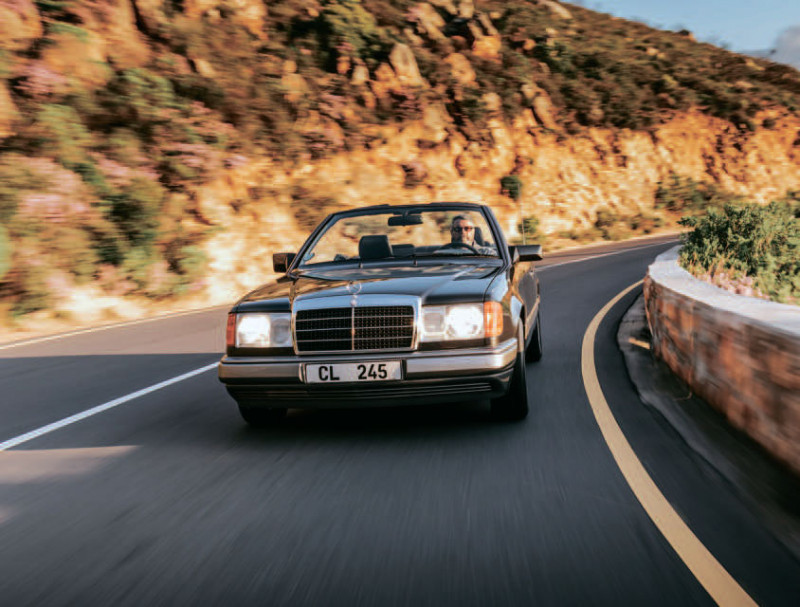 This road is one of the best and prettiest driving roads on the continent, snaking along the rugged coastline of South Africa’s False Bay. On the opposite side of the bay you have the Southern Suburbs of Cape Town. Incidentally, this road also formed part of the route that was used during the international launch of the Mercedes-Benz SLR McLaren back in 2004.

Behind the wheel there are a few elements that immediately remind you of the fact that this is a 124-based Mercedes. This includes the view over the bonnet, the near-square, compact side mirrors, and then several aspects of the cabin itself. Luxury items include heated seats and to the left of the gearlever there is the familiar shift button offering Economy and Standard modes. I don’t see the point of driving this car in any setting other than Standard, though. 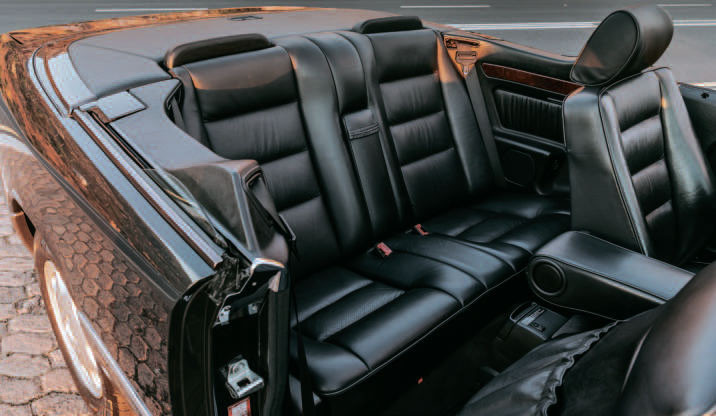 As I settle behind the wheel and close the door, the quaint little arm behind my left shoulder hands me the seat belt so it falls easily to hand. With the roof and windows permanently down for the entire afternoon (except for a single shot before the sun sets) we experience the best the A124 has to offer. There is the option to raise the windows and put the wind deflector in place, but on a perfect afternoon like this one, some wind entering the cabin is welcomed. And anyway, to my eye the deflector does the 124’s handsome lines no favours.

There are long stretches of open road where the 300CE-24 is only too happy to stretch its legs. Here I notice how the car will easily cruise at an indicated 100mph. Press the throttle pedal past its stop and you activate the kickdown function. From a relaxed 2,500 or 3,000rpm, the engine jumps around 1,000rpm and the car accelerates in a relatively linear fashion, accommodated by a throaty roar from the double exhaust pipes. Better still, I’m treated to a more intense six-cylinder symphony when the engine’s sound rebounds off the jagged rock faces lining our route.

With revs rising to 5,000rpm, the engine still has another 2,000rpm left, but as maximum power is delivered at 6,400rpm there is little need to push the engine way beyond six grand. It is in the middle of the rev range, however, that I find the straight-six most rewarding, with a good level of torque and plenty of shove left in reserve should you want to accelerate.

Through the corners, the Mercedes largely keeps body roll in check, although it will begin to wallow if you get rough with it. Certainly, this 124 performs best when the driver is relaxed behind the wheel and in no great rush to reach their destination, the cabrio far happier sweeping through beautiful scenery than scorching the edges of its Continental tyres.

Even at higher speeds, I can still have a decent conversation with my passenger without shouting as we make our way past Pringle Bay and Hangklip, and through Betty’s Bay. These towns are mostly populated during the holiday periods and they are wonderfully quiet out of season.

The next stop before we turn around is Kleinmond where we head to the small launch pad in the harbour. A number of people pay attention to the 124 convertible, as it is not a car you see often. If it was the saloon, it’s likely no one would have noticed it.

As we make our way back, the owner and I discuss this 300CE-24 in detail, which he’s owned since November 2015. “I’ve done regular trips with the car, usually around 150- to 200-mile return journeys to towns in the Boland or Overberg. Of the few cars I own, this will be the absolute last car I’ll sell. 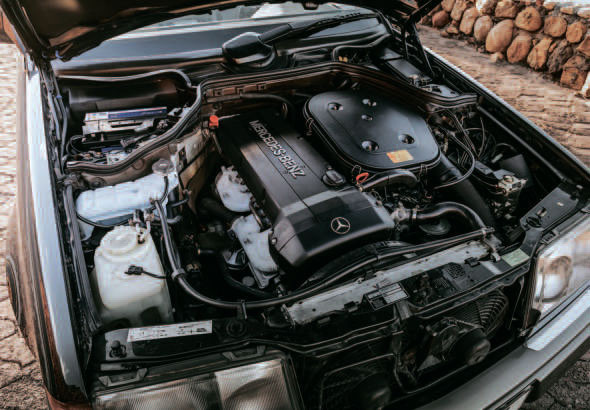 There are a number of reasons for this. Firstly, it is a really affordable car to maintain. You don’t necessarily need a specialist to work on the car. There are hundreds of thousands of 124s made, so parts are easy to source. Secondly, it drives like a modern car without all the modern technology. Moreover, it’s also fairly practical.

It is also a solid and safe car,” he continues. “On the open road, it really is an exceptionally comfortable grand tourer. Finally, if you want to drive fast you can, although that is not the most important feature of the car for me.”

The owner points out a couple of aspects of the interior that are not standard, as well as the grille and bumper which need to receive a correcting layer of paint. Other than that, the car is near perfect. As the owner says, the car has thankfully never been mistreated but it has been used, with minor stone chips visible if you look closer. That matters little as the car has been maintained properly, and the 100,000 miles on the odo shows that it has also been used regularly throughout its life. Meanwhile, still present with this 300CE-24 is the service book, owner’s manual and the original warranty.

As the sun begins dipping behind the horizon, we raise the fabric roof of the A124, complete with its glass rear window. We’ve been having so much fun driving al fresco, it suddenly dawns on me that this is the first time I’ve seen the roof locked in position. It is pleasing enough to the eye and certainly of high quality, but only in bad weather would I consider deploying it were I this car’s owner. For the rest of the time, it would be roof down all the way!

All figures from Mercedes-Benz; fuel consumption according to EEC urban

Of the few cars I own, this will be the absolute last car I’ll sell. Straight-six does its best work at the top end. That’s a model badge you don’t see every day.

Based on the 300CE Coupe, several reinforcements were made to the chassis of the 124-series Cabriolet. These included support structures in the A-pillars, windscreen frame, footwells, B-pillar bases and rear transmission tunnel area, as well as behind the instrument panel. The latter was also fixed to the transmission tunnel. Below the car there are diagonal braces on the frame floor that limit body flex. For rollover safety, there are two pop-up bars that will instantly rise behind the rear seats in an accident.

These measures may not sound too extensive, but in total around 1,000 new parts had to be designed and developed for the 124 Cabriolet. Some 130kg of sheet metal was used to make up for the lack of the 28kg metal roof. Furthermore, four vibration absorbers were fitted to bring vibration levels more in line with those of the Coupe. These added an additional 26kg.

There are no squeaks or rattles in the cabin, and overall the car feels remarkably fresh.

There is no better way to end a weekend than with a sunset drive on a pristine piece of tarmac. Eight-hole, 15-inch alloys and Continental tyres.Wilhelm was in his element driving the cabrio.