In a large room in the Carrozzeria Touring factory in Via Ludovico de Breme in Milan, Federico Formenti – known as ‘Mimmo’ to everyone since childhood – sits at his technograph, shrouded in smoke from his umpteenth Nazionali Esportazioni cigarette. It’s two in the morning but he’s still hard at work. For him, this office is almost a living room, a true place of contentment. Maybe there is something in the night that the muses grant him that is denied in the clarity and bustle of the daytime. 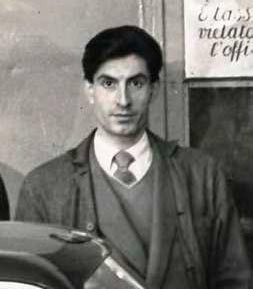 Satisfied, he signs his drawing with his name. Even though he knows that his employer, Carlo Felice ‘Cici’ Bianchi Anderloni, will ultimately take credit for what he has created, he is not upset. Nor does he mind that he is so poorly paid. Above all a modest man, Mimmo doesn’t seek the spotlight; he is happiest with his pens and models. And what he has just created he is certainly happy with: Touring’s first commission from Aston Martin. He has given birth to the new DB4, a car that, in the film The Italian Job, Mafia boss Altalbani will describe as a “preeety car”. Pretty it certainly was; it was also the Italian job, in styling terms, to end them all.

This scene from 1958 could have been any one of countless nights in Formenti’s long career at Touring. It was 12 years previously, in January 1946, that the 21-year-old Federico Formenti had been hired by the Milanese carrozzeria on the recommendation of his brother-in-law, Aquilino Gilardi, who happened to be Touring's main technical designer. The co-founder of Touring in 1926, Felice Bianchi Anderloni was impressed by Formenti’s multiple abilities, especially his perfect three-dimensional understanding, and installed him as an assistant to his existing stylist Giuseppe Belli, who in turn had taken over in 1933 from Giuseppe Seregni. It was Belli who inspired Touring’s motto “shaped by the wind” – literally, as he would glue dozens of threads of wool to his models and blow air from a fan over them to validate their shape.

Mimmo slotted in almost as Belli’s alter-ego, so similar were their tastes and ways of working. It was in France that Gilardi had studied the technical science of proportions, which in Italy only Touring used, and he taught these methods to Rabaioli (his apprentice) as well as Mimmo. This sense of proportion was applied even to minor details, an alchemy that resulted in graceful and beautiful shapes that were Italian and international at the same time. Touring’s work was soft, intelligent, elegant and, of course, shaped by the wind.

Between them, Belli and Formenti formed an unmistakably ‘Touring’ house style in the early postwar years, making full use of the carrozzeria’s famous patented ‘Superleggera’ form of construction (a simple framework of internal tubes over which the body was formed). Formenti was supremely capable of imagining first, representing technically and artistically later, and finally creating, together with sheet metal workers, mechanics and upholsterers, the silhouettes he had dreamed.

Just after Bianchi Anderloni had died, leaving his son ‘Cici’ to assume control, Formenti's first big job at Touring was to design a roadster body for Ferrari. His 166 MM barchetta debuted in 1948 to huge acclaim. He went on to design all of Touring’s Ferrari bodies, among them the 166 Inter, 212 Inter, 212 Export and 340 America. His ‘egg-crate’ grille became something of a signature motif for Ferrari and is still traceable in today’s models (such as the Roma).

A pertinent observation is that Mimmo’s 1948 Ferrari 166 was assigned the project number 1275; a mere 12 years later, his 1960 Lagonda Rapide bore the number 3025 – that’s 1750 designs, almost 150 per year. The 1950s was Touring’s golden age and the list of Formenti’s designs is long and glittering. We can cite all the Pegasos bodied by Touring, including the dramatic Pegaso Thrill; the ill-fated but pretty Isotta Fraschini Type 8C Monterosa; the exquisite Maserati 3500GT and 5000GT ‘Shah of Persia’; the Lancia Flaminia GT; and the 1956 Aston Martin DB2/4 convertible that impressed the British company so much that it commissioned the DB4 from Touring. Mimmo’s work on Alfa Romeo chassis was another career highlight. He penned the Alfa Romeo 1900C Sprint, 6C 2500 SS, 2000 Spider and of course the seminal Disco Volante, hand in hand with his friend Gioacchino Colombo.

In the early 1960s, Mimmo corrected and embellished Franco Scaglione's original (and impossible to make) Lamborghini 350GTV and turning it into the production-ready 350GT, followed up by refining it into the 400GT. As well as Aston Martin’s DB4, he also penned the DB5 and DB6, widely regarded as some of the prettiest shapes ever conceived, while he designed the Interceptor for Jensen, too, even though it was Vignale that productionised it.

Designers like Franco Scaglione, Marcello Gandini and others knocked on Touring's door, repeatedly offering their services, during the first half of the 1960s. Cici Bianchi Anderloni systematically rejected them, knowing that he already had all the talent he needed in Formenti.

However the writing was, unseen, on the wall: Touring was about to collapse. It had invested heavily in a new factory at Nova Milanese shortly before Lancia decided to stop using Touring to build its Flaminia, while Alfa Romeo also axed its 2600 Spider. An illadvised decision to manufacture Rootes Group cars at Nova Milanese also faltered. After one final attempt to lure Fiat in with a 124 convertible failed, Touring closed its doors for good in late 1966.

For Formenti, Touring's demise meant assuming the heavy responsibility of transferring production of the Lamborghini 400GT from Touring to the sparsely equipped factory of the Marazzi brothers, with whom Touring had been collaborating for some years. Lamborghini’s Giampaolo Dallara recalls Mimmo's tireless performance in ensuring the supply of bodies continued without break.

In the tough first months of 1967, Mimmo’s frequent visits to Sant'Agata Bolognese endeared him to everyone at Lamborghini. Ferruccio Lamborghini and his engineers, Dallara and Stanzani, were so happy with Formenti’s work that they commissioned him to design and build (via Marazzi) the new Lamborghini Islero. This was a relatively ‘safe’ design that rejuvenated the 400GT. It was a much less spectacular shape than Formenti’s 1966 Lamborghini 400GT Flying Star II – which was a pioneer of the sporting shooting brake form – but Ferruccio Lamborghini considered that he already had sufficient drama in his range with the astonishing new Miura.

Speaking of the Miura, Mimmo always showered Gandini’s creation with praise. However, it was Mimmo who had first designed a proposal for Lamborghini’s new P400 chassis while at Touring. Formenti’s scale model of a wonderful proposal called 'Tigre' was finished at the end of 1965. After Touring closed its doors, all the materials for the new car went to Bertone and perhaps some elements of Formenti’s Tigre can be gleaned in the Miura, particularly its rear ‘Venetian blinds’.

The second half of Formenti’s professional life was about to begin at Alfa Romeo. His time at the sprawling state-owned colossus was to contrast hugely with the complete creative freedom he’d enjoyed at Touring. But the transfer to Alfa Romeo was actually very natural: firstly, it was geographically close by; and secondly, there were strong historical ties between Alfa Romeo and Touring.

Alfa Romeo’s president Giuseppe Luraghi appointed Cici Bianchi Anderloni as head of Alfa’s Dipartimento Progettazione Carrozzerie, which included the Centro Stile directed by Giuseppe Scarnati. However, Anderloni had little influence within Alfa and served more as an advisor and ambassador for marque until his retirement.

Formenti followed his old boss to Alfa Romeo, assuming a central role at the company’s Centro Stile. One of his first jobs was to help out Autodelta, which was managed by ex-Alfa, Ferrari and ATS engineer Carlo Chiti. The Tipo 33 was in full swing at the time and on the express wish of Scarnati, Formenti was put in charge of the Tipo 33’s aerodynamic development during 1967 and 1968, leading to the sensational Tipo 33-2 Daytona.

When Autodelta stopped its collaboration with Centro Stile in mid-1968, it was time for Mimmo to take care of more ‘earthly’ matters. Given the quality of the stylists at Centro Stile that he was supervising (including Emilio Mario Favilla, Ernesto Cattoni, Ermanno Cressoni, Domenico Nardiello, Carlo Giavazzi and Carla Spada), he began to concentrate more on the technical aspects of the projects and less on the artistic ones. One advance for him was that he no longer had to build each scale model himself, although he still spent long hours with modellers, stylists and body technicians. Formenti oversaw such Alfa Romeo projects as the Alfetta (in all its multiple variants), the Alfa 6, the Brazilian Alfas and the 33. Alfa’s own proposals for the Alfasud, also overseen by Formenti, were ultimately beaten by Giugiaro’s tender.

When Mario Favilla published a book about car designers, he described Formenti as a man of great skill and humility, who not only came up with brilliant solutions for his employers but also took care to mentor younger designers. He highlighted one episode from 1970 concerning the Alfetta saloon, which needed a full technical scale drawing for type approval, but which hadn’t been done. Giuseppe Scarnati desperately asked Formenti if he could do it. A job that normally took a week to do, Formenti did in one night.

After retiring in February 1980, Formenti liked to travel as often as he could. He drove a battered old Fiat 124 estate, later replaced by a Fiat Regata Weekend. He also liked to cook and entertain friends, as well as continuing to paint and design. Mimmo passed away on 23 November 1994 at the age of 70 due to complications around his diabetes condition. Very few people appreciated the full impact that Formenti had. Only one car magazine gave him an obituary. That seems unfair when the likes of Giugiaro, Gandini and Fioravanti are praised to the point of boredom. Formenti is one of those designers, alongside Salomone, Spada, Rapi, Revelli, Martin, Sessano, Scaglione, Brovarone and Michelotti, who are regrettably and unjustly ignored. Formenti’s curriculum vitae would be the envy of the most exalted of them all.

But then, unlike many of his colleagues, Mimmo was totally uninterested in public credit or fame. He was a one-man Centro Stile, a person with the skills to perform each and every one of the tasks inherent in creating a new car design. For his employers, collaborators and disciples, he was indisputably the best: a brilliant, inspired, enthusiastic, passionate, tireless, modest, generous, surprising and always positive character. We hope that we have contributed to the recovery of his memory with a story that we dedicate to him with admiration and gratitude.

Our sincere appreciation goes to Mario Favilla, Franco Rabaioli and Patrick O'Brien for their help with this feature.

ABOVE: One of the most sublime shapes of all time?

Alfetta was overseen by Formenti post-Touring. Lancia Flaminia convertible was bodied by Touring to Formenti’s design Sunbeam Venezia: not perhaps the most resolved of Touring’s designs Tigre was Formenti’s proposal for what eventually became the Lamborghini Miura One of many Formenti studies for the 1968 Alfa Romeo 33/2 ‘Daytona’ (inset).

Pegaso Thrill of 1953, pictured with Formenti in the centre by the windscreen

A fantastic article, it has increased my appreciation of Formenti's sadly overlooked talent.