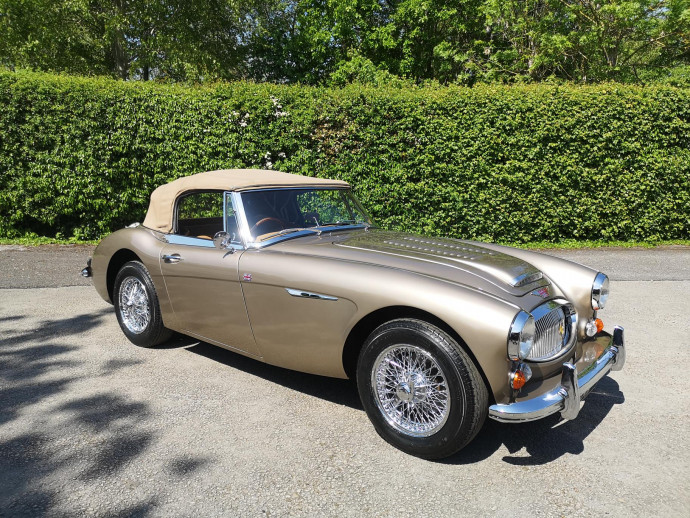 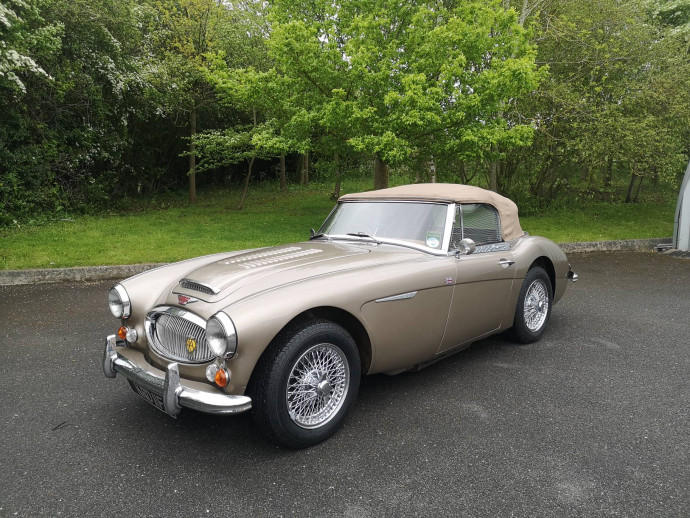 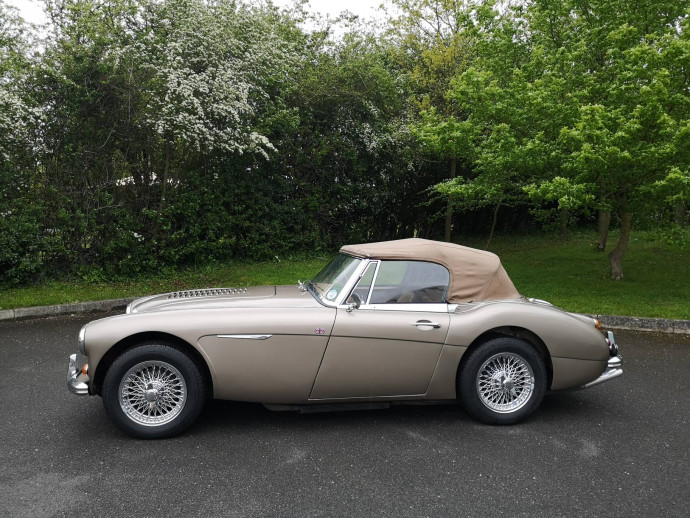 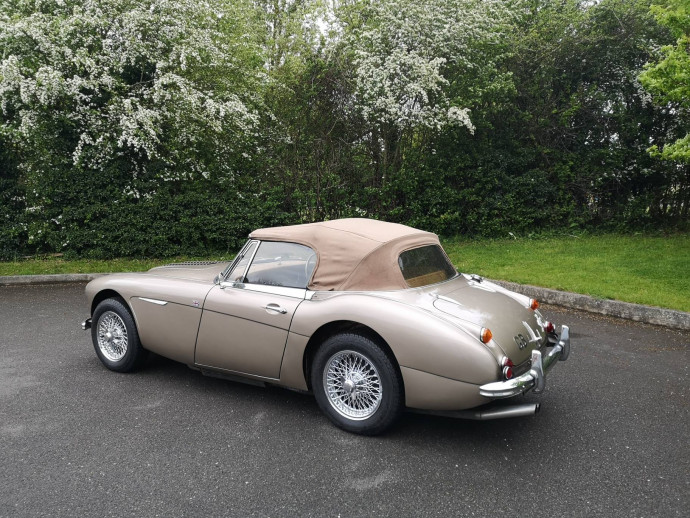 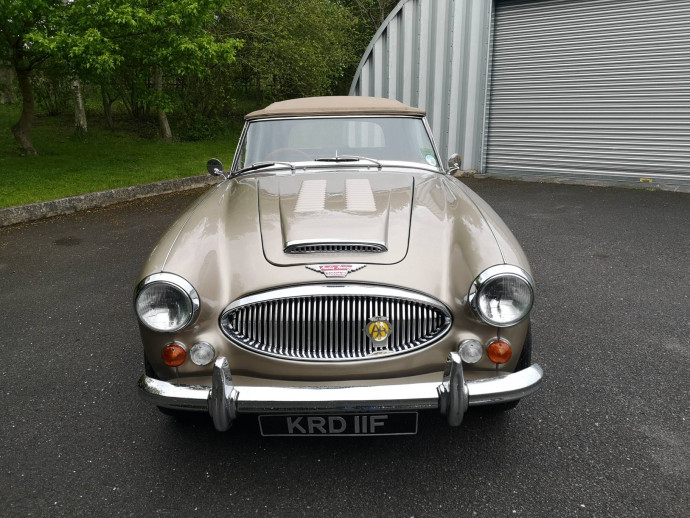 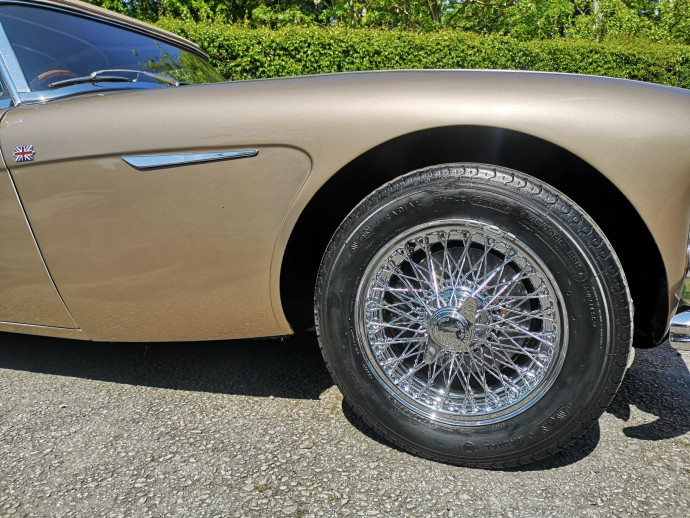 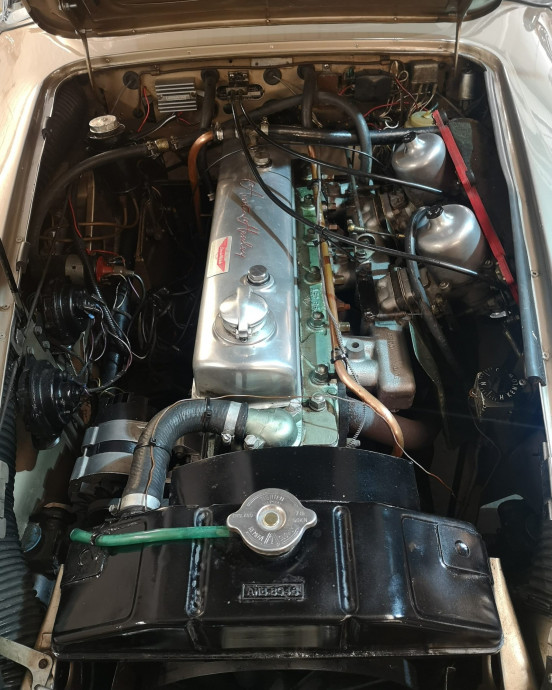 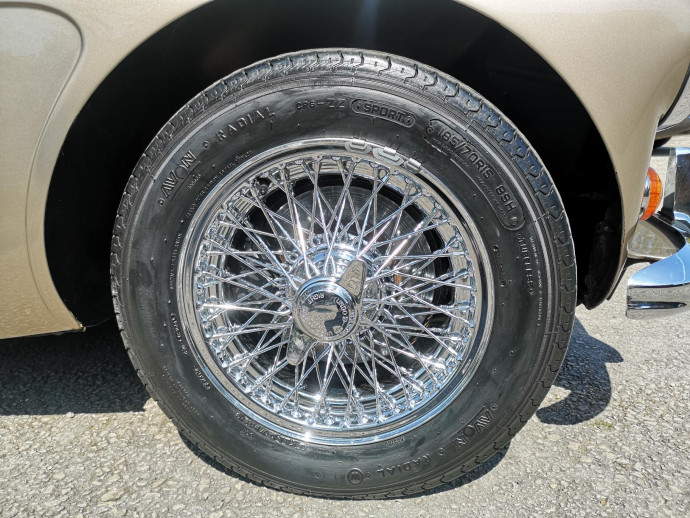 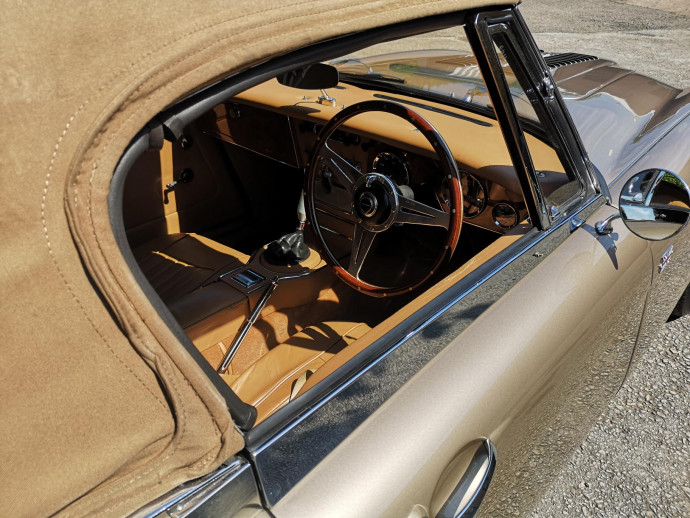 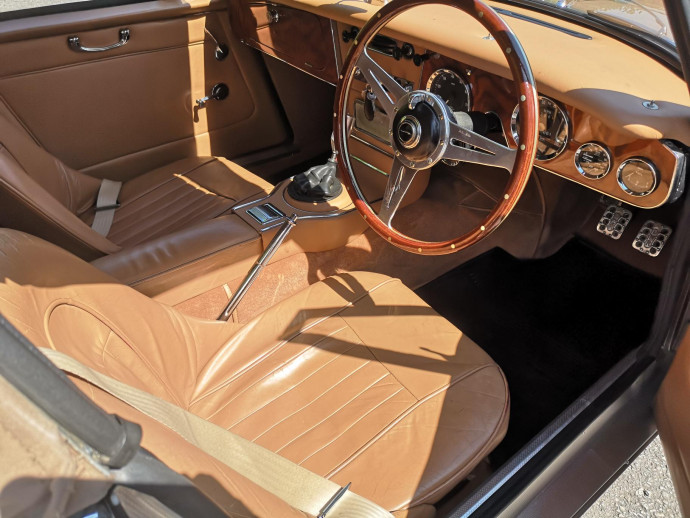 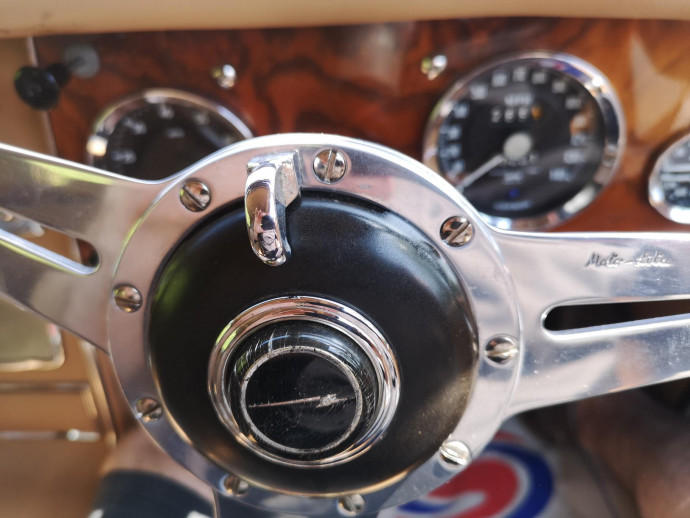 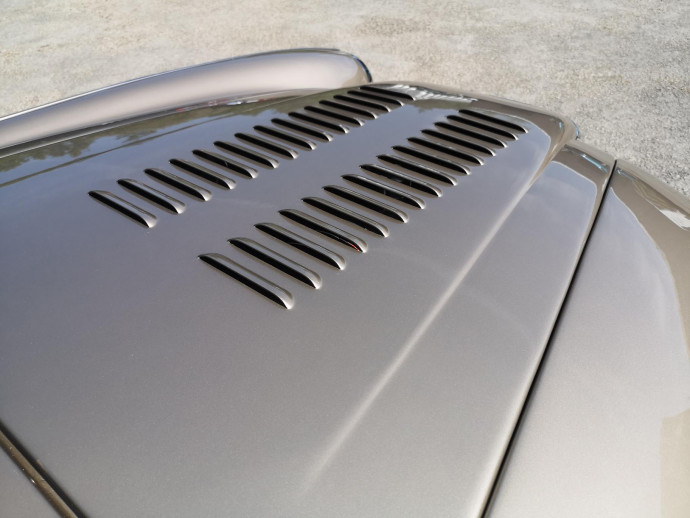 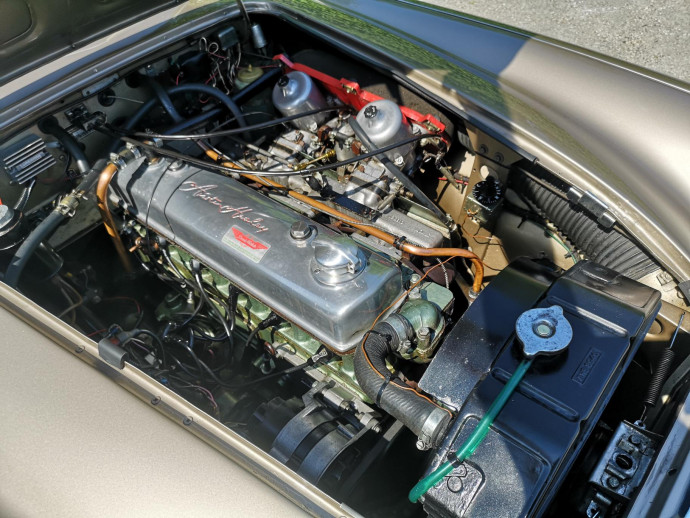 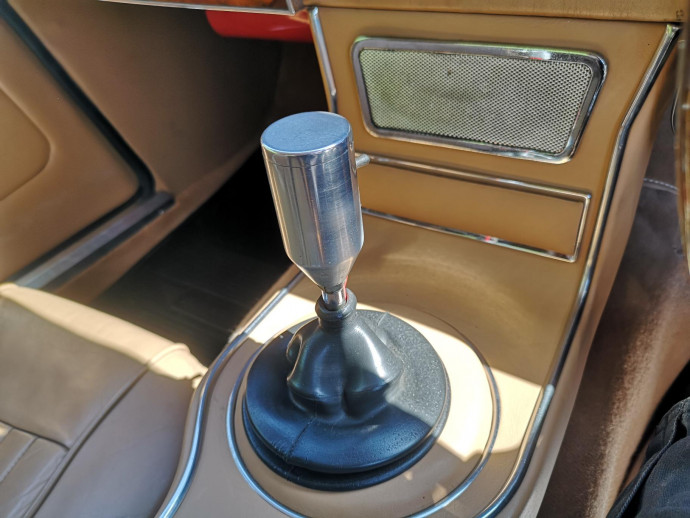 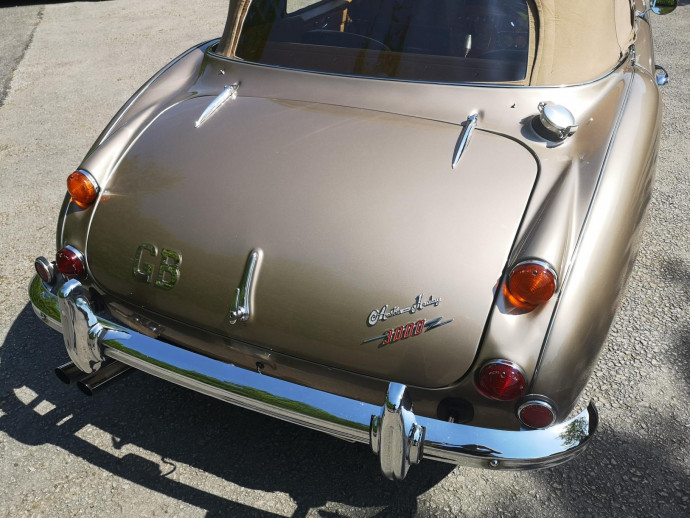 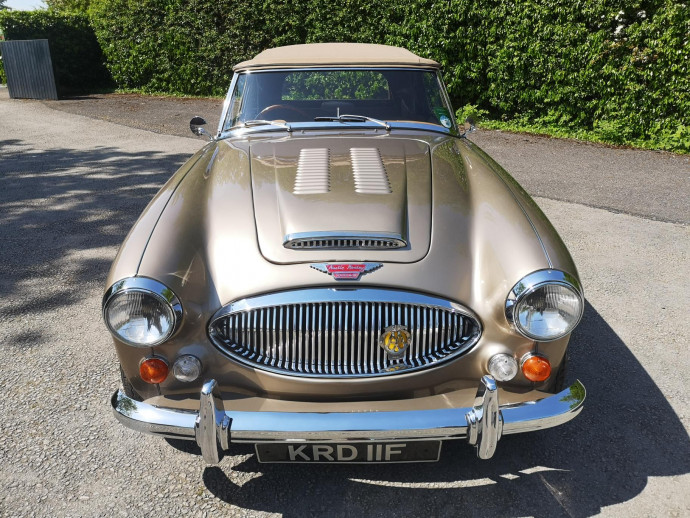 A great example of the ultimate in big Austin-Healeys, reckons Richard Gunn – eye-catching too in its striking, unusual colour.

It’s the Golden Beige Metallic paintwork that makes this Austin- Healey stand out but, beyond that, it’s a fine example of the breed. There are a few bodywork blemishes, but it’s excellent elsewhere.
As one of the last 3000s to be built at Abingdon, this MkIII was sufficiently late to receive that very mid-Sixties livery. It’s in good condition despite being restored back in 1998. There are some bubbles on one of the sill seams under the driver’s door, a few blemishes where the paint has been touched up, a scratch by the nearside front indicator and some lifting lacquer ahead of the offside rear wheelarch. The beige canvas hood is excellent and the wire wheels so flawless, they look new. Avon Radial Sport CRS-22 tyres, date-stamped 2005, need replacing because tyres tend to become dangerously hard at under ten years old.
The dashboard and leather-clad centre console are present and correct, and in excellent condition. The same can be said of the leather and carpets. There’s minor lifting of the wood veneer in places around the glovebox lid and some light wear on the driver’s seat; aside from that, it’s a superb interior. Aftermarket fitments include an almost-matching wooden Moto- Lita steering wheel, additional Smiths’ oil temperature and current gauges in a bolt-on panel down to the left of the steering wheel and a Denis Welch overdrive switch on the gearstick (superseding the dash-mounted one). There’s no radio.

The engine bay has been kept clean and tidy, and there’s no sign of any leaks. All the fluids are clean and at the levels they should be. Upgrades that can easily be spotted include a Denis Welch-modified engine – with unleaded cylinder head, oil cooler, alloy finned sump and spin-on oil filter conversion – plus Lumenition electronic ignition, a Kenlowe fan, and a modern foam air filter. The latter does look at odds in such a classic bay.
The car starts easily from cold and runs well. Underneath, there’s comprehensive undersealing, and thicker anti-roll bars fitted at the front and rear.
Driving any Big ’Healey is always exhilarating. While 148bhp may not suggest a surfeit of power, here it packs considerable punch. The acceleration is smooth and rapid, and although the gearchange is on the notchy side – as they all are on these cars – it’s easy to find the ratios, with a surprisingly light clutch.
Overdrive is swift to kick in and out, and such is the torque that you can practically drive through most traffic conditions just by switching in and out of overdrive in top. The steering is tight and responsive, and the brakes effective. Those with long legs may find the auxiliary gauge panel by the steering wheel a bit obstructive.
The history folder is very comprehensive, comprising handbook and BMC service book, invoices from the Sixties onwards, and recent bills chronicling a great deal of work undertaken by both Sherwood Restorations and Denis Welch. The paperwork backs up the car’s 90,000 recorded mileage.
CHOOSE YOUR AUSTIN-HEALEY 3000
3000 introduced in July 1959, replacing 100/6. It was essentially the earlier car with its BMC C-series straight six now 3.0 litres and front disc brakes. Available as two-seater BN7 or 2+2 BT7. 3000 MkII followed in May 1961 with a third SU HS4 carburettor. BN7 and BT7 body styles discontinued by the end of June 1962 and replaced by the BJ7, with wider windscreen, wind-up windows and an integrated hood. Triple SU HS4 carburettors replaced by a pair of HS6s. 3000 MkIII, codenamed BJ8, replaced BJ7 in February 1964. New SU HD8s and high-lift camshaft took power to 148bhp.
Phase II model of 1964 saw the 3000 through to the end of its life in 1968, with a modified chassis to increase ground clearance. Quote £675.49 Comprehensive, 5000 miles per year, garaged. Call: 0333 323 1181