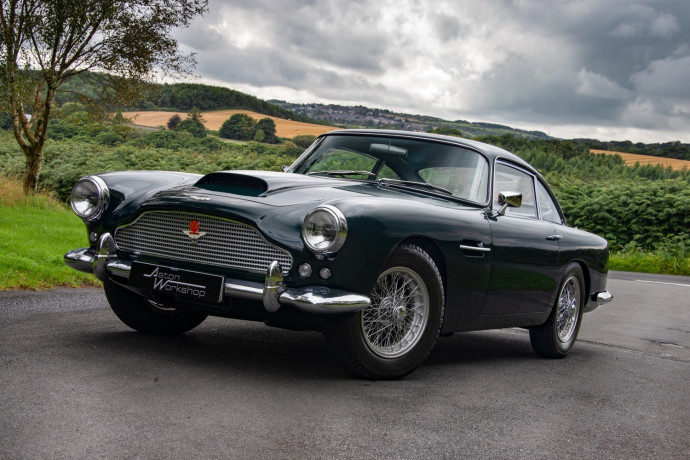 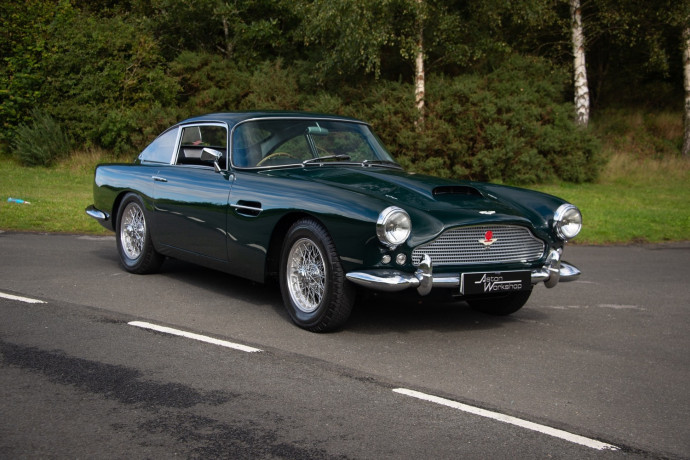 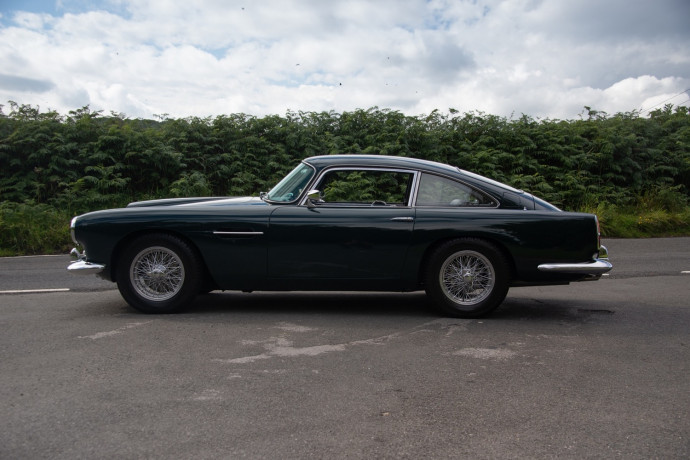 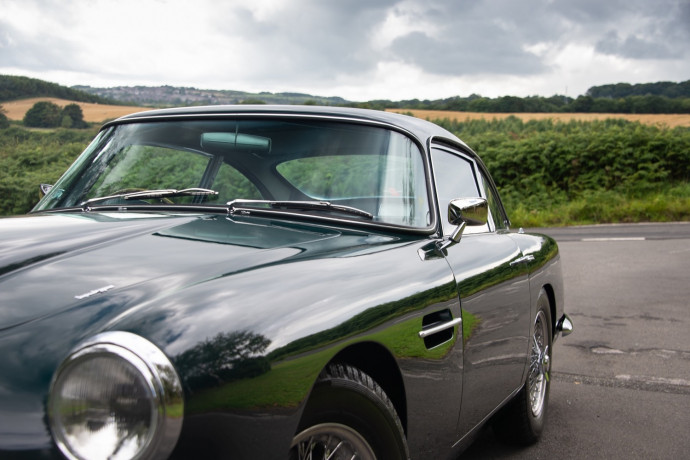 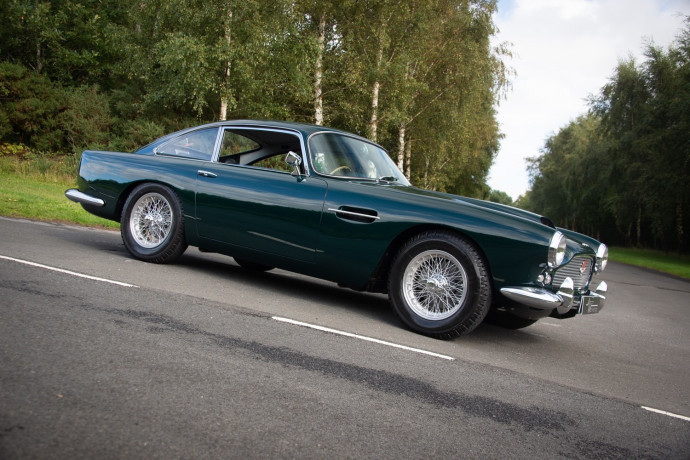 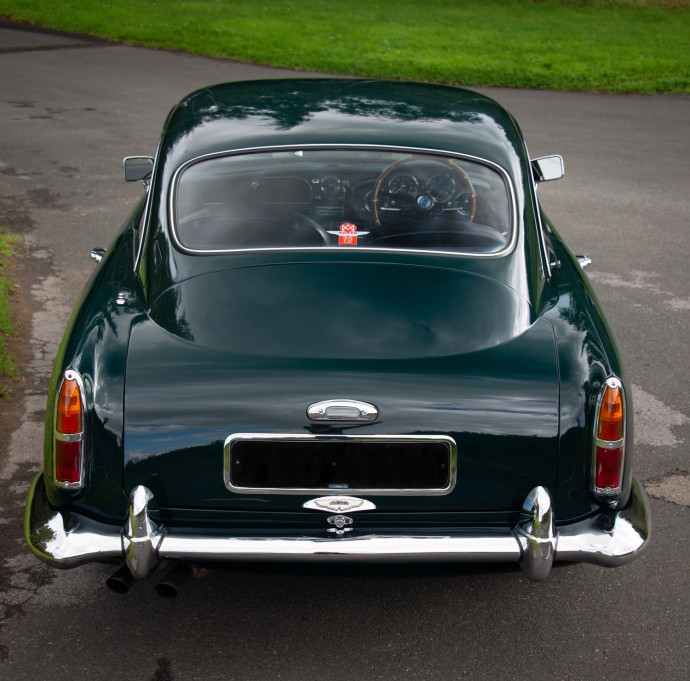 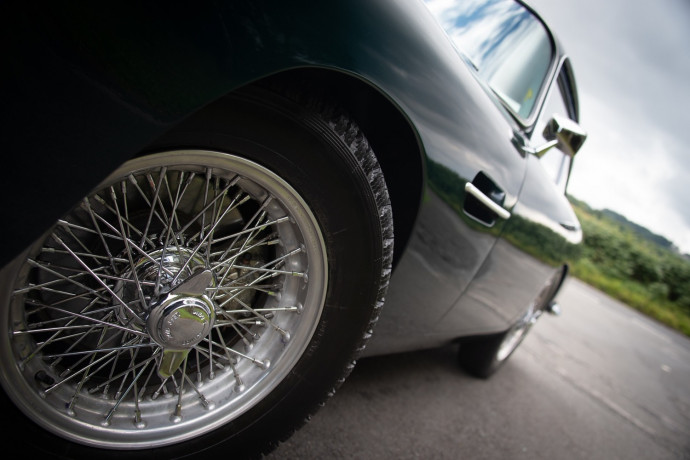 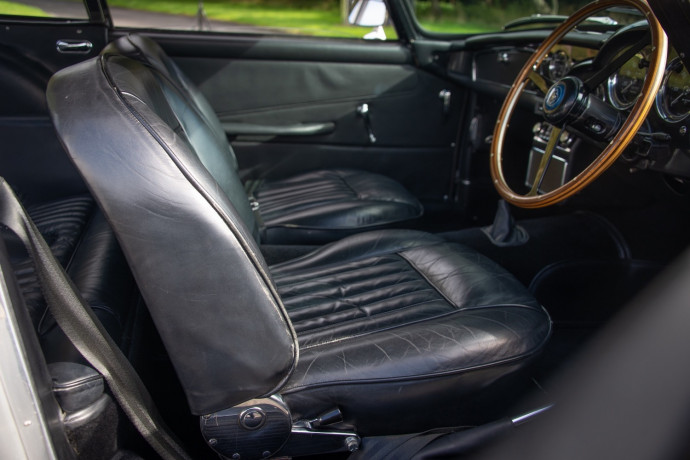 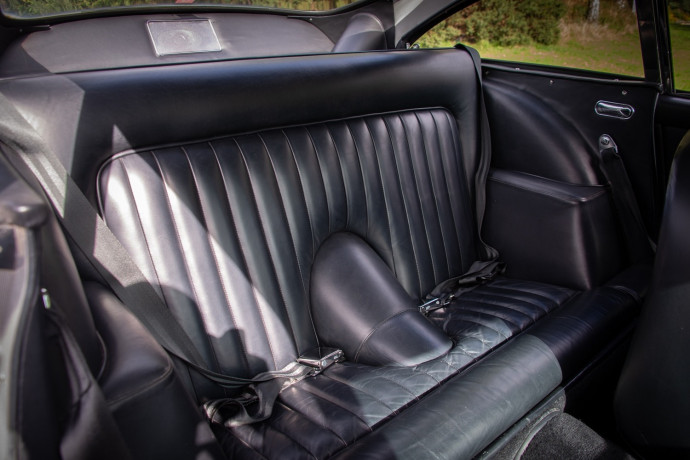 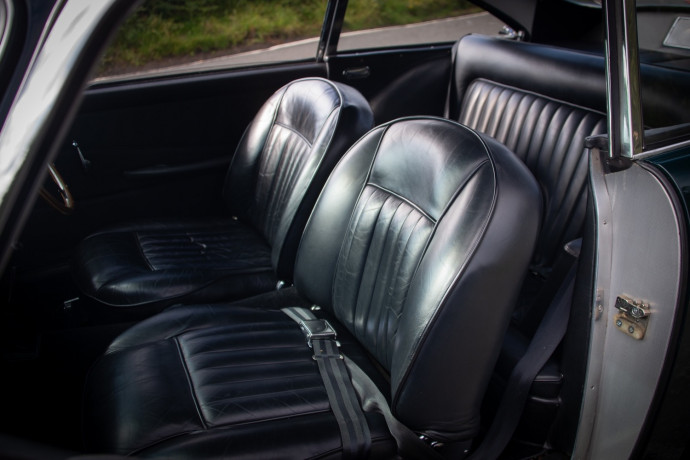 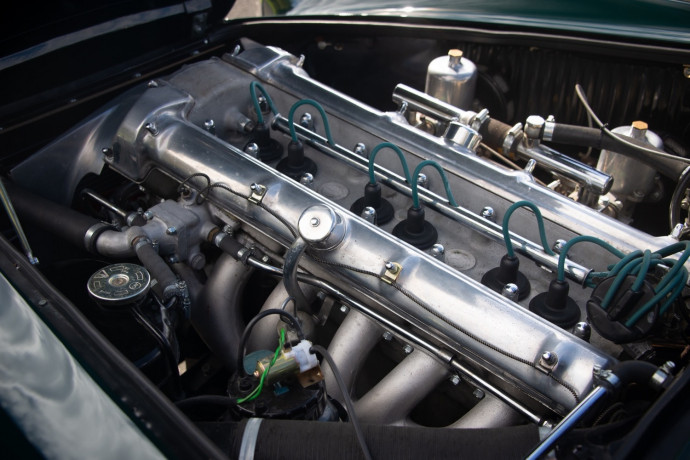 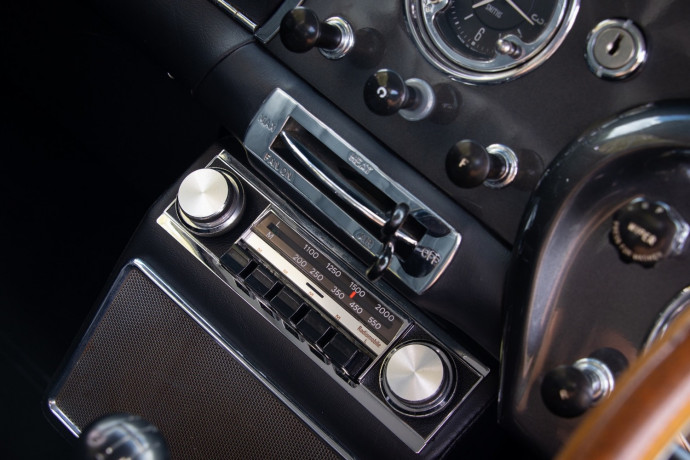 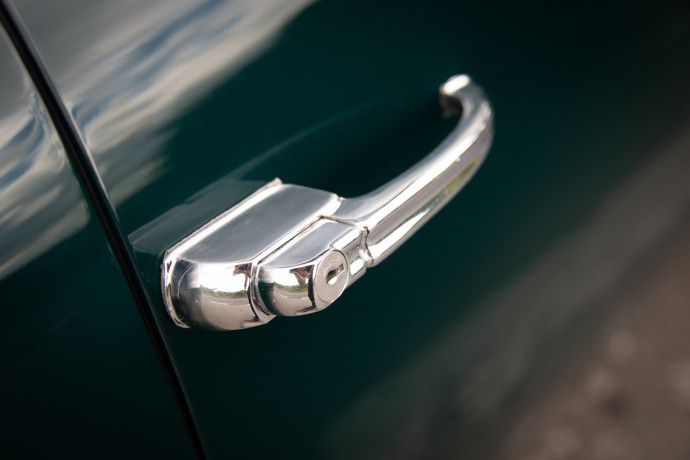 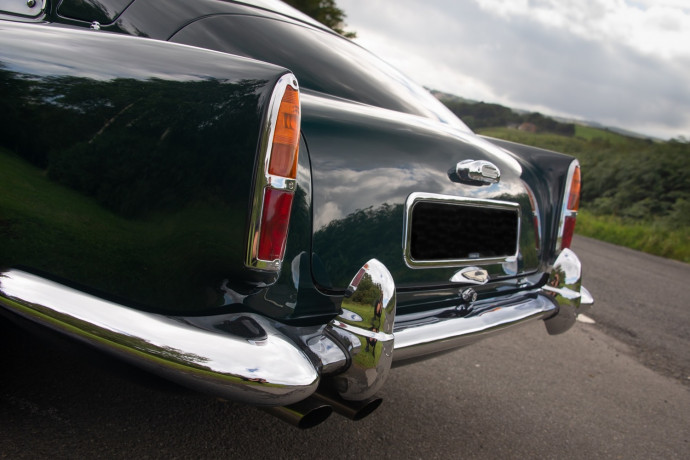 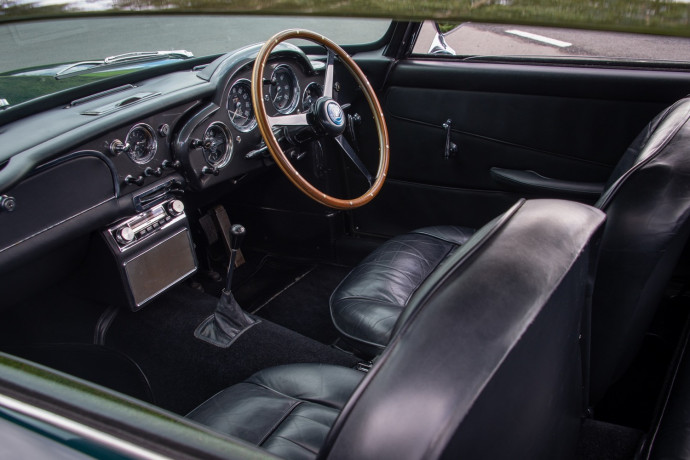 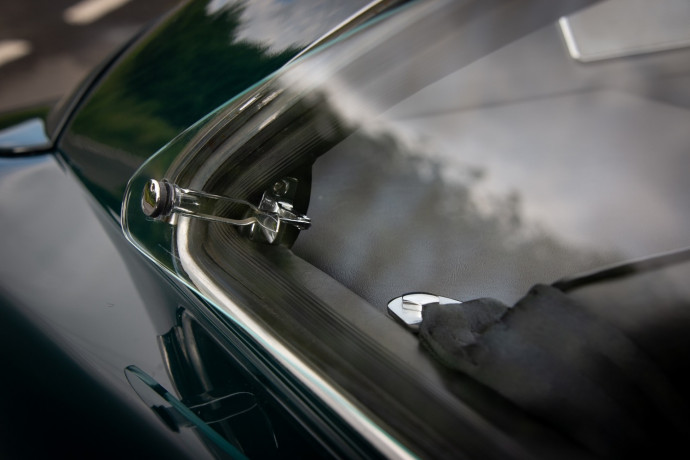 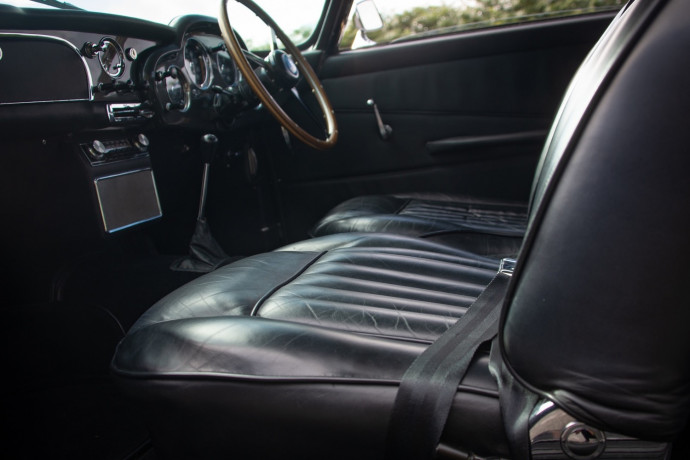 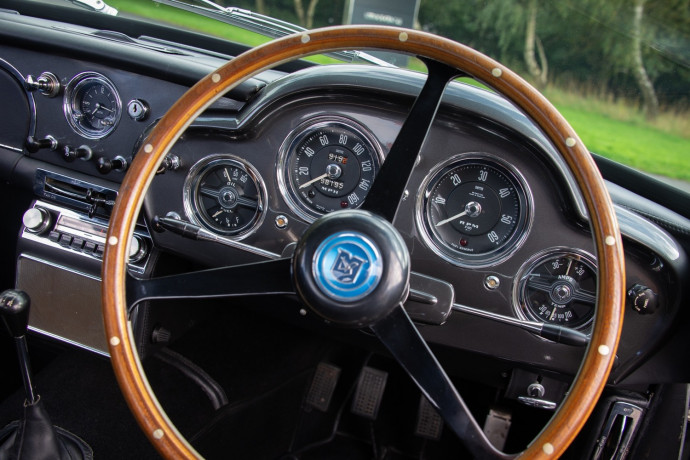 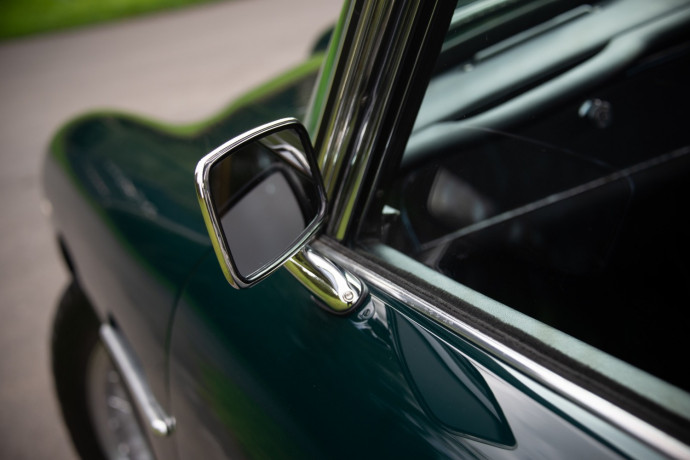 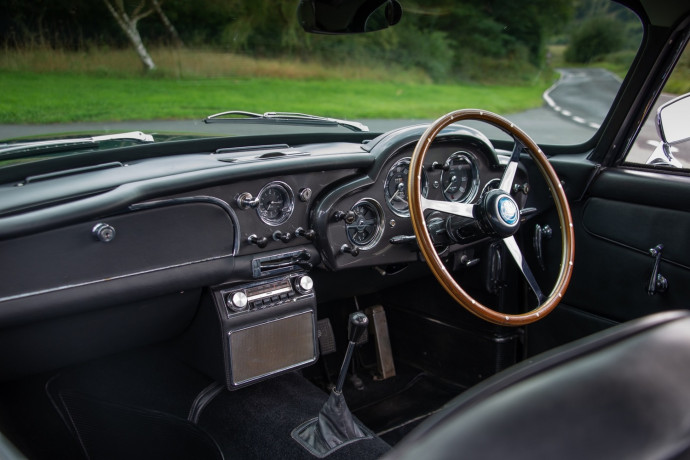 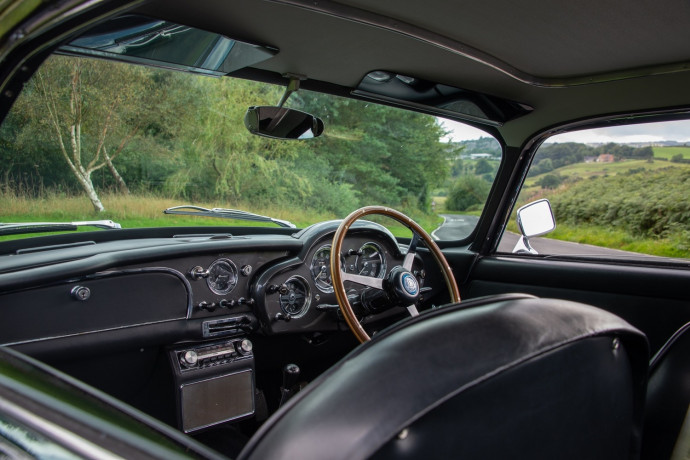 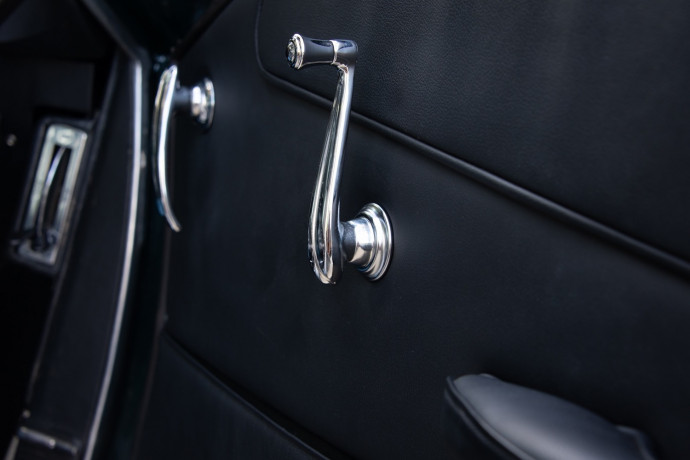 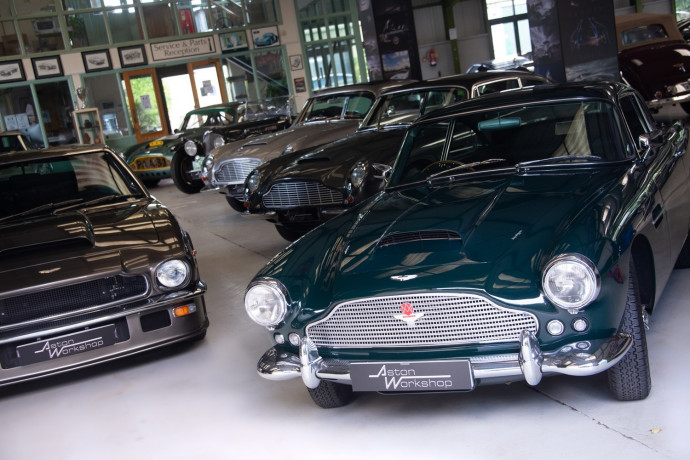 
Goodwood Green over black leather is always a good choice for an Aston Martin, especially when it’s as nicely executed as it is on this DB4. The car has had quite a cosmopolitan life, living in both the UK and the US. It returned to the UK in 2001 and underwent some restoration work – not a singular event but a series of procedures. The chassis was extensively cleaned and fettled between 2003-4 and the car had some bodywork done, including new door skins.
Although it might be considered an older restoration now, the paint remains in excellent condition, displaying a deep gloss all round. The chrome is similarly of the first order showing no pitting or discolouration, while looking into all those overlooked crevices reveals no deterioration in finish. The same goes for those clean and very tasty wire wheels.
Panel and trim fit is very tidy – lids and doors show narrow and consistent shut lines and the doors open and close smoothly without sagging. Seals between glass and metal look a healthy shade of black though there are a couple of very small areas where the edges rear windscreen appear to be delaminating.
The inside of the car maintains the standards set by the exterior. The seat cushions are plump and firm and the front seat uprights are not loose. The black leather hides retain a deep black pigment and show only the lightest patina. Look hard enough and you will see a small scuff on the outer edge of the driver’s seat cushion but all else appears good. The carpets and mats are of a similar order, showing just enough wear to make you believe that the car has been occupied at least twice. Instruments and switches are all present, clean and correct with the gear stick and steering wheel showing the slight rubbings of sympathetic use.
Everything in the engine bay appears to be just as it should be with no evidence of leaks or corrosion. No oil or grime has been allowed to accumulate in corners or crevices and the brighter metal parts have a dull lustre from just the right amount of cleaning. All hoses and leads appear to be healthy with their junctions and fasteners similarly good. Fluids are clean, correct in colour and filled to the correct levels.

The car drives as well as it looks. The Tadek Marek six makes all the right Aston noises, unspoilt by splutters or smoke and oil pressure sits in the upper half of the gauge. All the controls seem to have the right amount of give and resistance; the steering feels poised in the corners and the brakes pull up progressively with no judder or snatching to either side. There is a delightful machined feel to the gear change, the stick snicking through the gate with just the right amount of weight.
There are faster DB4s out there and this car isn’t shy about its value but it really embodies the style and driving feel of what this model was and is all about, without any noise or extraneous factors getting in the way of that experience.


CHOOSE YOUR ASTON MARTIN DB4
The Aston Martin DB4 was launched in 1958. The body by Touring used Superleggera tube- frame construction; its 3.7-litre six-cylinder dohc engine developed 240bhp. Shorter and lighter DB4GT arrived in 1959 with 302bhp and enclosed headlamps – 75 cars were made plus a further 19 that had Zagato bodies.
Series 2 from February 1960 with front-hinged bonnet. The short-lived Series 3 saw revised three-piece tail-lamps; Series 4 cars switched from an egg-crate to barred front grille. A convertible model was added, plus a 266bhp Vantage and the rare Vantage GT.

The Series 5 (September 1962) was longer, taller and most had enclosed headlamps that were carried over to the DB5 in summer 1963.

New door skins were fitted as part of the car’s restoration in 2001.
Only gentle wear to be found here.
Engine bay doesn’t look over-polished.