Two decades on from the first TechArt GTstreet product, which was based on a 996 Turbo, comes the new GTstreet R, built on the 992 Turbo platform. Limited to just eighty-seven vehicles and drawing on TechArt’s thirty years extracting massive power and enhanced chassis dynamics from Porsche sports cars, this carbonclad monster unleashes 800bhp and 700lb-ft torque with a colossal top speed of 217.48mph, setting a new standard in its segment.

Since the release of the 996-based beast in 2001, the GTstreet concept has stood for the ultimate symbiosis of track performance and personalisation without having to sacrifice creature comforts — a GT captivating performance enthusiasts by offering an incomparable driving experience, building on each Porsche’s already impressive foundations. To this end, the new GTstreet R makes use of new lightweight componentry and further optimised aerodynamics. An impressive carbon rear wing sits above a race-inspired rear end, while the car’s brake discs are also made from carbon composite. There’s a bespoke exhaust system and TechArt’s own Formula VI forged wheels, while the interior is trimmed in lashings of sumptuous Alcantara, leather and heritage-style fabrics, inspired by traditional motorsport materials, underlining the GTstreet R’s true personality when let off the leash. 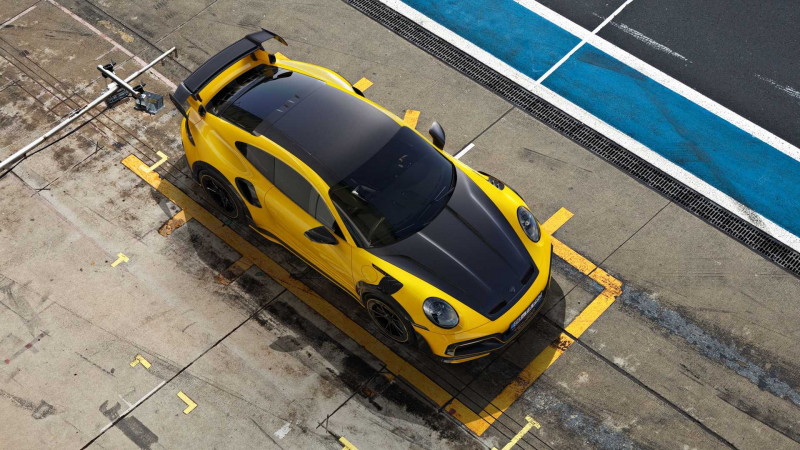 More carbon can be seen taking the form of the car’s wide wheel arch extensions and a roof spoiler directing air onto the rear spoiler and its active wing profile, thereby increasing downforce when it’s needed most. The large diffuser — also made of the wicked weave — frames the massive centrally position tailpipes, while under the lid lives a new TechArt flat-six styling package (you can guess what it’s made from) with a numbered metal badge, reminding owners just how rare their GTstreet R really is. 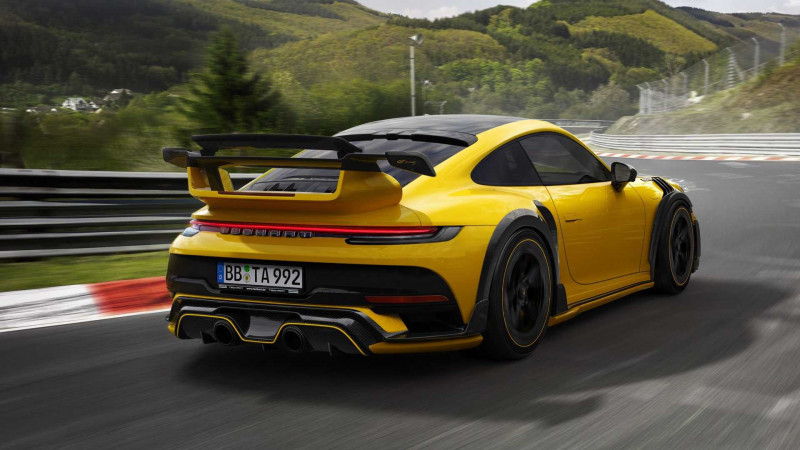 Overall, the aero updates are claimed to generate four times more downforce at the rear and forty-five percent less lift on the front axle (at a test speed of 87mph) when compared to the standard 992 Turbo. Additionally, air throughput has been significantly increased all around the car thanks to larger air intakes. The the active aerodynamics — with variable front and rear spoilers — delivered out of the box from Porsche are retained, even with the GTstreet R’s add-ons doing their thing.

In terms of chassis dynamics, TechArt offers two upgrade options with lowering and coil springs, the first dropping the ride height anywhere between 15mm and 25mm and offering what TechArt describes as “a sharper driving experience than the standard 911 Turbo”. The second option will be fully adjustable and is currently in development with the upcoming TechArt GTstreet R Clubsport Package.

Numerous personalization options are on offer, including two-tone paint finishes. The previously mentioned Formula VI forged wheels wear 265/35/20 tyres on the front axle and 325/30/21 at the back, with TechArt recommending Michelin Pilot Sport Cup 2 for maximum performance on track days and the Michelin Pilot Sport 4S for fast-road use and occasional visits to a circuit.

What about the cost? The new GTstreet R package is yours for €73,000 plus VAT and can be ordered through TechArt agents, Parr in Crawley or Tech 9 in Liverpool, with immediate effect. For all the details, visit techart.com/gtstreetr.