New G87-gen M2 will remain RWD, and pave the way for an m2 gran coupe and fiery full-fat M 1 Series.

Mess with the formula? No chance. New M baby stays rear-drive with manual ’box, gets better everywhere else

BMW is developing a new rear-wheel-drive M2 performance coupe, as part of a future compact M car line-up that will include an all-wheel- drive M2 Gran Coupe and a 1 Series with around 402bhp/300kW.

The second-generation M2 coupe, which takes the internal codename G87, is scheduled to go on sale in Europe in 2022, making 2023 likely for Australia. It will bring with it a detuned version of BMW M’s latest six-cylinder petrol engine, sourced from the new M3 and M4. 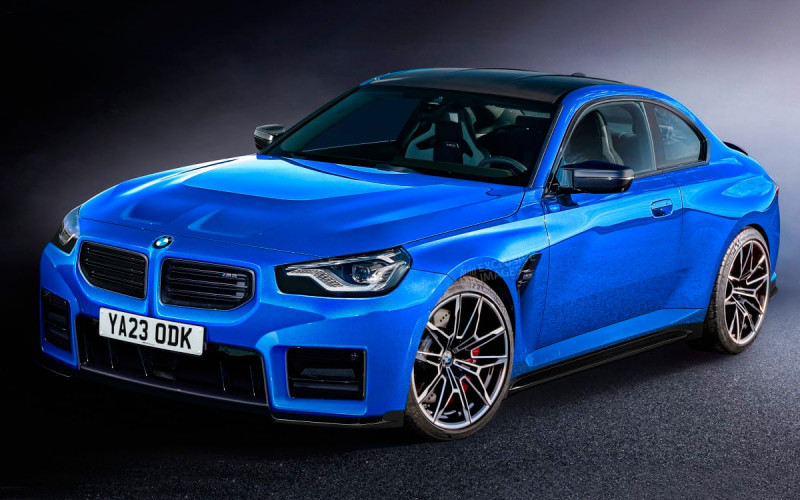 Despite the heavy camoufl age of this newly spotted prototype, it looks as if the M2 will feature angular front-end styling influenced more by the Z4 and M8 than the controversially big-grilled M3 and M4. Flared arches, big wheels and a quad-exit exhaust will be the most obvious visual differentiators from the standard 2 Series, but upsized air intakes and aero-enhancing trim will complete the look.

The twin-turbocharged 3.0-litre petrol six, dubbed S58, replaces the similarly configured S55 used by the current M2 and promises the same high-revving characteristics, with a redline of 7200rpm.

Nothing is official at this early stage, but insiders hint that the S58 engine will be tuned to provide the new junior M car with at least 317kW in standard form – a 15kW increase over today’s M2 Competition – to top the 310kW of the turbocharged 2.0-litre four-cylinder in the Mercedes-AMG A45 S.

Together with 560Nm of torque, this should ensure off-the-line performance is on par with, if not better than, that of its predecessor, despite an incremental increase in weight due to slightly larger dimensions. Its 0-100km/h time should be in the low four-second bracket and its top speed close to 280km/h when configured with a final-drive ratio similar to today’s M2. The basis for the next M2 is the new second-generation 2 Series Coupe, itself heavily related to the third-generation Z4 and its Toyota GR Supra sibling.

Revealed last month, the new 2 Series Coupe takes a different technical route to the new 2 Series Gran Coupe by adopting the latest evolution of BMW’s Cluster Architecture (CLAR) platform. This ensures the future M2 will have a similar mechanical layout to today’s model, with a longitudinal engine mounting instead of the transverse layout of its four-door BMW M235i xDrive Gran Coupe sibling, which is based on BMW’s Front Architecture (FAAR) platform.

The adoption of the CLAR platform also future-proofs the M2, to an extent, by providing it with the basis for a 48v electrical architecture, which is crucial for such features as regenerative braking and the option of an electric torque boost.

The new BMW M2 is expected to go without mild-hybrid electric boosting at launch. However, with BMW’s M division already well advanced on such a system for the S58 engine, it could be incorporated during the car’s planned seven-year lifecycle.

As with today’s model, BMW plans to offer the new M2 with a six-speed manual gearbox and an electronically controlled Active M Differential. There will also be the option of an eight-speed torque-converter automatic transmission, which would be crucial if the car is to receive a mild-hybrid system. This will replace the current M2’s dual-clutch gearbox, matching developments elsewhere in the BMW M range.

As with the current M2, a number of traditional M division developments will elevate the new model above regular 2 Series Coupe variants. These include additional stiffening measures by way of suspension strut-tower braces front and rear, dynamic engine mounts and a wider track, the last of which again has necessitated new bodywork. Despite the M division’s move to provide other recent M models with fully variable all-wheel drive, our sources say the new M2 will retain rear-wheel drive exclusively as part of plans to pitch it as a puristic, trackbred model in the best of BMW tradition.

The decision to stick with rear-drive will give the M2 a unique selling point in a market now dominated by all-wheel-drive rivals, such as the Audi RS3 and Mercedes-AMG A45 S. “It’s part of what makes the M2 unique in its market segment,” said an insider. “It’s also what our customers have come to expect from BMW M: a pure and undiluted driving experience.”

DrivesToday also understands the BMW M2 will eventually be joined by a four-door namesake, despite previous reports to the contrary. Rivalling the Mercedes-AMG CLA 45 and forthcoming new Audi RS3 sedan, the M2 Gran Coupe will get around 290kW from a highly tuned version of the M235i Gran Coupe’s four-cylinder engine and have fully variable all-wheel drive.

That ultra-potent four-pot will also transfer into the most powerful 1 Series hatchback yet, which will sit above the all-wheel-drive, 225kW M135i. It’s not clear what name this new flagship will take. M1 is considered holy ground, having been used on the first bespoke road-going M car back in 1978, and 1M was the widely used nickname for the limited-run 1 Series M Coupe of 2011. Below: Under the camo is front-end styling influenced by Z4. Power up; manual stays; oversize nostrils in the bin. All is set to remain well in M2 land.

I’m so relieved that the new 2 Series doesn’t feature those horrible grills seen on the latest 3 and 4 Series BMWs. I have an F22 220d M Sport and I’m looking to trade it in soon for another BMW, I love the 2 Series so the new version was top of my shopping list, but I was worried the styling would be too challenging. I must say that the G42 M240i looks especially fantastic – well done BMW!Beauty Contest (Part 3...)