Nothing expresses the rapid and far-reaching changes that have taken place at Aston Martin since Tobias Moers’ arrival better than Valhalla. First announced as a concept in 2019, the dramatic ‘Son of Valkyrie’ was planned to be a continuation of the close technical partnership between Aston and Red Bull Advanced Technologies. 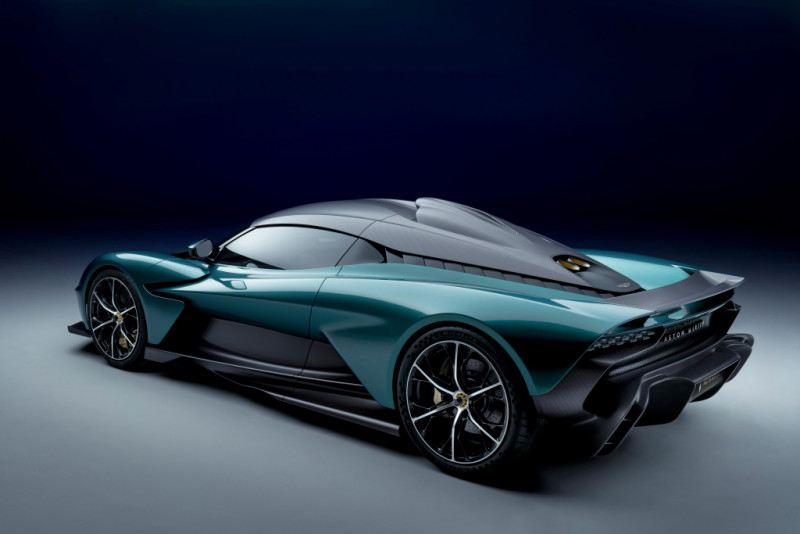 With plenty of input from Adrian Newey and a bespoke, clean-sheet, turbocharged 3-litre V6 supplemented by hybrid electric, it was to command an asking price of £1.2 million and be built in limited numbers. Then events overtook it: the impact of Aston’s troubled IPO, strained finances, a new cadre of investors, the formation of a factory Aston Martin F1 team and a new management team led by Moers resulted in a rethink. And Valhalla v2 is a very different machine.

Gone is the bespoke V6 (on the grounds of the costs required to overcome problematic Euro 7 emissions compliance), replaced by an AMG-sourced flat-plane-crank twin-turbocharged V8 that can be found in the flagship AMG GT Black Series. A new intake system and other detail changes will lift peak power from 720 to 740bhp, while a top-exit exhaust system will hopefully give an Aston-appropriate soundtrack. The new 150kW/400V hybrid system employs a pair of electric motors, one on the rear axle just behind the mid-mounted V8 and another at the front, combining to produce 201bhp and endowing the Valhalla with a total of 937bhp. That’s big power, but still 49bhp less than that produced by the conceptually similar Ferrari SF90 – Valhalla’s most obvious rival – even though the Aston is considerably more money.

The complexities of the all-wheel-drive system that these motors facilitate could fill a book, but suffice to say that, in much the same manner as the Ferrari, Valhalla uses the front axle motor for drive in EV mode – which has a range of eight miles and a maximum speed of 80mph – but splits electric power across front and rear axles as needed when supplementing the V8 ICE’s output.

Significantly, Valhalla will use an all-new eight-speed DCT twin-clutch transmission (a first for Aston), which has been designed for the marque’s hybrid future. As such it does without a reverse gear (Valhalla uses the front axle electric motor to reverse), and can even select two gears at once to keep the V8 and electric motors in their relative sweet-spots. There’s also an electronic limited-slip differential (e-diff) to enhance traction and stability in low, medium and high-speed corners.

As with the original Valhalla concept, the new design is built around a bespoke carbonfibre tub. Target dry weight is 1550kg, which suggests it should be usefully lighter than the hefty SF90. Aerodynamic performance is critical to the overall package but, as with the Valkyrie, Valhalla aggressively harnesses the air flowing beneath the car in order to preserve a pure upper surface. Huge underfloor venturi tunnels channel air either side of the passenger compartment, while an active front splitter and rear wing adjust automatically to maintain aero balance across all speed ranges. At 150mph some 600kg of downforce presses the Valhalla into the road or track surface.

The suspension borrows heavily from motorsport thinking, with pushrod front suspension and inboard dampers to reduce unsprung weight. An extreme Track mode will stiffen and lower the car beyond the point of road usability (much like the McLaren P1) to maximise mechanical and aerodynamic grip. The production-spec wheels are 20in in diameter at the front and 21in at the rear, and wrapped in Michelin Pilot Sport Cup tyres.

As you’d expect, Valhalla promises massive performance. Aston projects a 0-62mph time of 2.5sec, a top speed of 217mph and a targeted record-breaking Nürburgring lap time of 6min 30sec. Clearly Moers means business, which is no surprise given Valhalla is the torch-bearer for his ‘Project Horizon’ road map for the brand.

Stylistically, the new Valhalla is a softer, sexier and just plain better-looking machine than the original concept, while still presenting as a purposeful and highly advanced supercar. There are clear hints of both Valkyrie and Vanquish Concept, which combine very successfully with elements of the original design. Perhaps most importantly, it genuinely looks like an Aston, something the jaw-dropping but freakishly functional Valkyrie is arguably too extreme to manage.

Specifics of the new design include a prominent roof scoop, forward-hinged dihedral doors, swooping rear deck and one-piece rear wing. A new treatment for the front, rear and flanks brings the softness and curves from the Vanquish Concept for what promises to be a shared design DNA between the two models.

Aston’s trademark grille has been stretched to create a wraparound effect, and larger, rounder, matrix LED headlights give the new design a more handsome face. While still colossal by class standards the rear diffuser has been toned down, illustrating the difference between the immaturity of the 2019 design and the poised-for-production status of this more evolved design.

Aston is yet to share details of the interior design, but we’ve been told to expect a ‘pared-back cockpit design with ergonomics unashamedly focused around the driver’. What we do know is that there will be more space inside than in the extremely cosy Valkyrie, and that there will be dual-zone air-conditioning, a rear-view camera and CarPlay/Android Auto to ensure connectivity with the full range of mobile devices.

Aston is working to a tight deadline, with the second half of 2023 targeted as the timing for earliest deliveries. Between now and then will be an intensive period of engineering followed by exhaustive test and development. Aston Martin F1 drivers Sebastien Vettel, Lance Stroll and Nico Hülkenberg will be part of that process, doubtless driving virtual versions of Valhalla on the F1 team’s simulator to accelerate chassis set-up when physical prototypes are up and running.

Pricing? Well, at £580,000 plus local taxes (so almost £700,000 in the UK) it is around half the original concept’s proposed price, but this still makes it significantly more expensive than Ferrari’s SF90. Build numbers? Aston remains somewhat coy, but has suggested a figure of 1000 cars spread across a two-year build period.

Mid-engined cars remain as-yet unexplored territory for Aston Martin, so it remains to be seen how buyers respond. Based on what we know and can see, Valhalla is a compelling machine. One that’s more rooted in production reality than its predecessor and armed with the firepower to fight Ferrari. Exciting times.

Clockwise from bottom left Valhalla features forward-hinged dihedral doors; rear wing will adjust automatically to maintain aero balance; exhaust will be tuned to give an appropriate Aston Martin character; centre-lock wheels frame huge carbon-ceramic brakes. Below Reworked Valhalla blends some of the original 2019 concept with elements of the mid-engined Vanquish Concept and Valkyrie, but with a more clearly identifiable Aston grille.