With a production run of no more than thirty cars, Porsche Motorsport is celebrating twenty-five years of Manthey-Racing with an extraordinary new GT2 RS Clubsport designed exclusively for track days and circuit racing. Like the recently launched 935, this new motorsport machine is powered by a 3.8-litre twin-turbo flat-six producing a shade over 690bhp. Power is transferred to the rear wheels via a seven-speed PDK transmission, with the car’s distinct design adopting many components and elements from past and present Porsche race cars.

“Porsche Motorsport and Manthey-Racing have won many races and championships since the team was founded a quarter-century ago,” explains Matthias Scholz, Porsche’s Director for GT Racing Cars. “Since 2013, the two companies have been closely affiliated, and with the unique special edition 911 GT2 RS Clubsport 25, this successful partnership has moved to the next level.” It’s worth noting Porsche is now a fifty-one percent shareholder in Manthey- Racing, which is why we expect to see more MR-branded equipment making its way from the track into the Porsche product line. 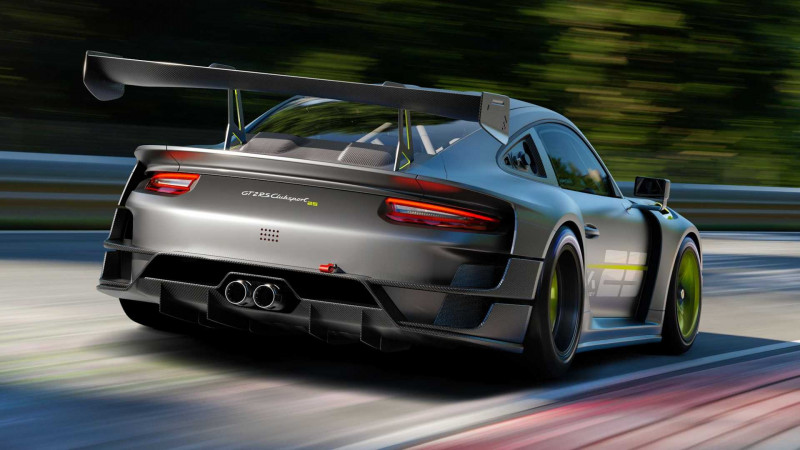 “The 911 GT2 RS Clubsport 25 benefits from the motor racing experience Manthey-Racing and Porsche Motorsport have gained around the world. It is the perfect circuit racing car for ambitious private drivers, and it’s an impressive example of engineering skill,” Scholz continues, before telling us inspiration for the GT2 RS Clubsport 25 came from Manthey-Racing’s famous 911 GT3 R, which Nürburgring fans fondly dubbed Grello because of its distinctive green and yellow livery. The nod can be seen in similarly coloured accents around the exterior of the GT2-based beast, which makes use of 935-style composite-constructed body panels.

As far as its chassis is concerned, the 911 GT2 RS Clubsport 25 features components of the modern 935, including the generously dimensioned eighteen-inch centre-lock rims. Complete with custom offsets, these work to deliver a significantly wider track when compared to the standard 911 GT2 RS Clubsport. The electronic control systems and steering gear also mirror that of the modern 935, while the rear of the 911 GT2 RS Clubsport 25 features a huge wing with new side plates and swan-neck support brackets (similar to those of the new 911 GT3), ensuring uninterrupted airflow. A wide rear spoiler forms a unit with the body and, like on the modern 935, serves as a wrap-around separation edge. It’s an element which distinguished the Manthey-Racing squad’s first MR-badged Porsche, based on the 996-generation 911.

New ventilation openings in the rear lid below the back window expedite air circulation in the engine bay, while Manthey-Racing optimised the design of the functional diffuser, which provides the framework for the newly designed centre-exit exhaust system. A 992 GT3 Cup rain light adds to the race-ready package.

One of the key features of the 911 GT2 RS Clubsport 25 is its racing headlights, featuring a four-strip design. While these units originate from the Le Mans-winning RSR, they underwent further development specifically for the limited-run model. As a space-saving measure, the indicators are integrated. Meanwhile, the interior, including the welded-in safety cage, has been adopted from the 911 GT2 RS Clubsport and complies with FIA standards.

The cost? Porsche offers the 911 GT2 RS Clubsport 25 for €525,000 (plus country-specific taxes). Orders can only be made via email to 911GT2RSClubsport25@porsche.de, so don’t go badgering your local Porsche Centre’s sales manager. Deliveries are expected early 2022.