Dacia has revealed the all-new Jogger seven-seat MPV at the Munich Motor Show. It will be the first Dacia MPV to be sold in the UK, and also its first model sold with a hybrid powertrain. Available to pre-order from November, an anticipated price tag of around £15,000 will undercut rivals in typical Dacia fashion. The first cars are expected at dealers early in the new year.

While MPVs have fallen out of fashion in recent years, Dacia has addressed this by giving the Jogger SUV-style rugged looks. Along with a slightly raised 200mm ride height, it features front skid-plate style trim, chunky black wheelarches, tough side skirts and roof rails. The Jogger has the brand’s Y-shaped LED daytime running lights, while its vertical rear lights allow the tailgate to be opened wider for easier loading. 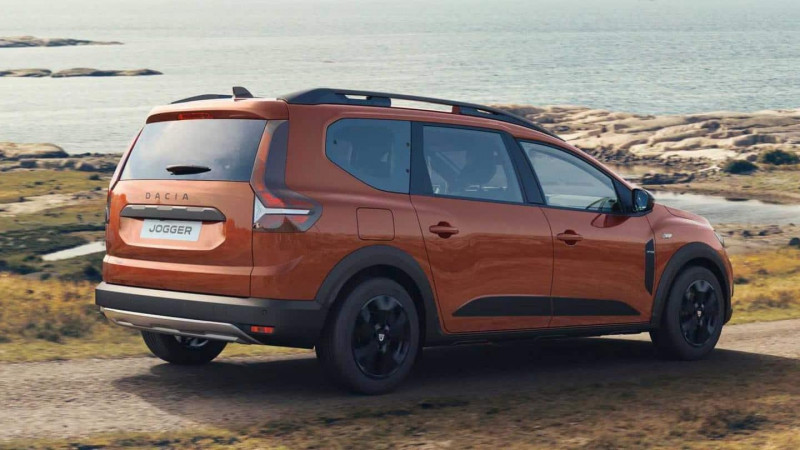 Measuring 4,500mm in length, the Jogger is based on the same CMF-B platform found under the latest Dacia Sandero, with a unique rear module to extend its length. With three-row seating, it can accommodate seven adults according to Dacia, and its split-folding seats can be arranged into more than 60 configurations. With the rear seats folded flat, up to 1,819 litres of space is available for cargo. This decreases to 712 litres and 213 litres in five- and seven-seat layouts respectively. Handy features are also included in the boot, including elastic straps, hooks and lashing rings to help secure loads. The modular roof rails can also be set up as roof bars, with a maximum load of 80kg.

Trim levels will start with Essential, along with a mid-level Comfort and limited-edition Extreme version adding even more body cladding and black 16-inch alloy wheels. Lower trim levels get ‘Flex Wheels’, designed to mimic alloys, but of a more robust and affordable construction. There are also three levels of infotainment system, called: Media Control, Media Display and Media Nav. The most basic uses a smartphone dock and app to make the owner’s phone the centre of the media system. Media Display gets its own eight-inch touchscreen, with Android Auto and Apple CarPlay, while Media Nav adds Wi-Fi connectivity, navigation, USB ports and an upgraded sound system with six speakers.

From launch, a 1.0-litre three-cylinder turbocharged petrol engine will be available, in either TCe 110 or TCe 100 Bi-Fuel guise. The first has 108bhp, while the latter gets 99bhp, but can also be run on LPG. From the factory, the Bi-Fuel gets a 50-litre petrol tank and a 40-litre LPG tank, giving it an overall range of up to 621 miles at its claimed 37.1mpg.

From 2023, the Jogger will also get a hybrid solution, namely the 1.6-litre petrol engine, electric motor and 1.2kWh battery powertrain already seen in the Renault Clio. With this technology, Dacia claims the Jogger can run with zero emissions for 80 per cent of the time on city roads, with a corresponding 40% reduction in fuel consumption.