AMG has earned the honour of developing the brand new R232 SL from scratch – find out how Mercedes’ performance division has broken new ground with the automotive icon using a range of technological advancements. Words Kyle Molyneux. Images Daimler AG.

So, this is it – the brand new R232 SL. It’s based on a state-of-the- art, 2+2-seater architecture and packs four-litre V8 biturbo power at launch, plus much high-tech wizardry and several eye-widening surprises. Not only is this the first SL wholly developed by AMG (meaning all models will be badged as such), this new-generation roadster is also the first SL to feature four-wheel drive – and it’s standard! 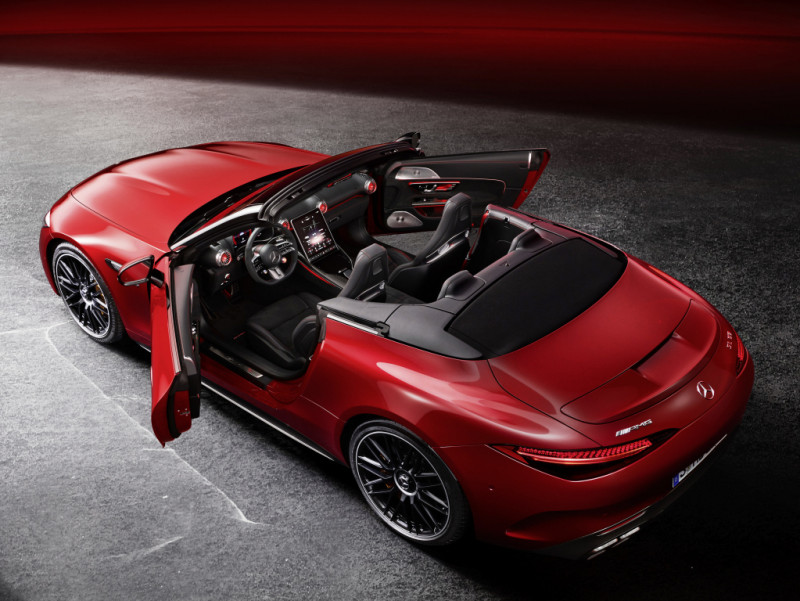 The body shell – a mix of aluminium, steel, magnesium and fibre composites – is a clean-sheet design from Merc’s performance division in Affalterbach and it doesn’t share a single component with the previous-gen R231 model, or even the AMG GT Roadster. Weighing just 270kg without doors, bonnet or bootlid, the new body shell is massively more rigid than the old one, with transverse rigidity up a significant 50 per cent, for example. That’s great news for handling and refinement.

Offsetting the additional weight of the 4Matic+ all-wheel drive system is a new, space-efficient soft top that saves 21kg over a folding metal vario-roof. Opening and closing in 15 seconds at speeds of up to 37mph, the soft top’s lesser weight also contributes to the new SL’s improved centre of gravity.

To our eyes, and we suspect many others, the R232’s styling is a great leap forward from that of its predecessor’s. Chief designer Gorden Wagener and his team’s new roadster blends a long wheelbase with short overhangs and a long bonnet to great effect, the added AMG aggression in the snarling mouth and aero addenda only adding to the visual punch. In a nod to SLs of old, there are two power bulges on the bonnet, while sharply outlined digital LED headlamps and slim LED rear lights remind us this is a car for 2022 and beyond.

Indeed, Mercedes said the SL’s styling would inspire other roadsters in the future – a replacement for the SLC, perhaps?

Despite all that styling flair, however, the new SL’s drag coefficient is as low as 0.31 thanks to several active aerodynamic devices, including a new, two-piece air control system called AirPanel hidden behind the front intakes that reduces front end lift. There’s also an active rear spoiler with five angles of attack that deploys above 50mph, and a new optional carbon element for the underbody, which moves downwards by 40mm at 50mph to create a Venturi effect and suck the SL into the ground, boosting steering precision and stability.

Return of a familiar name

Both models are equipped with a nine-speed AMG Speedshift MCT 9G transmission with wet start-off clutch promising snappy responses to accelerator pedal and paddleshift inputs. The SL63 gets an electronically controlled limited-slip differential as standard, but you’ll need to tick the option box for the AMG Dynamic Plus Package to get this feature on your SL55.

For the new SL, AMG has given its stalwart four-litre powerhaus a new oil pan, repositioned the intercoolers and added active crankcase ventilation, while improving exhaust gas flow. The SL63 makes its extra grunt mostly through an increase in turbo boost pressure and an engine software upgrade.

At least one plug-in hybrid model will join the SL range later, complete with AMG E Performance badging. It should use a similar V8 hybrid system to the GT S E Performance, which packs in an electric motor and high-density battery pack for a system output of 831bhp and 1,084lb ft torque, plus a modest seven-mile range in electric mode.

In terms of suspension, the R232 is the first AMG with five front links arranged within the wheel rim, improving kinematics. At the other end of the SL, you’ll find another five-link set up plus something else new to the SL genre – active rear axle steering (fitted as standard), which enhances vehicle agility and stability.

As standard, the SL55 runs on 19-inch AMG multi-spoke alloys, and the SL63 sits on 20-inch AMG five twin-spoke rims. Nine wheel types are available in total, up to size 21-inch. The base braking system comprises 390x36mm lightweight discs up front gripped by six-piston calipers, plus 360x26mm discs at the rear grabbed by single-piston floating calipers; the SL55’s calipers are painted red and the SL63’s yellow.

The lightweight discs feature a re-considered perforation direction said to improve heat dissipation, response in wet conditions and cleaning after use. An AMG ceramic composite braking system with larger discs is optional.

We’ve got this far without mentioning the SL’s fabulous, driver-focused cabin, so it’s about time we dived in. Mercedes-AMG describes the R232’s interior design as ‘hyperanalogue’ because it repackages classic SL themes in an ultra-modern way – and looking at the pictures, we’re inclined to agree.

Two lavishly appointed chairs with integrated headrests are positioned up front, while seating for two people up to 1.5m tall is found just behind. The 12.3-inch touchscreen – linked to the latest, second-generation MBUX infotainment system – that slides up from the centre console reduces the button count and adds to the cabin’s minimalist feel, while the digital instrument cluster fl anked by highly detailed air vents dazzles with its crystal clear graphics and sporty fl ashes of AMG-themed splendour.

Merc’s fabled Airscrarf neck-level heating system is standard (front occupants only), and the driver can switch between the host of driving modes (Slippery, Comfort, Sport, Sport+, Individual and Race) via dials on the chunky AMG twin-spoke steering wheel. Note, Race mode is standard on the SL63 but part of the optional AMG Dynamic Plus Package on the SL55. The level of intervention from the ESP system can be adjusted too, and the SL is able to briefl y brake an inside rear wheel to tighten its line through a bend.

First impressions of the R232 SL are hugely positive. The newly-installed 4Matic+ system with variable torque distribution should make the very most of the available thrust, while the AMG-developed suspension should deliver new-found poise missing from the SL in recent years without robbing the car of exceptional levels of ride comfort.

There’s even a 213- to 240-litre boot, plus at least one hybrid to look forward to. The cabin is a dream – surely one of Merc’s best to date – and we’re big fans of the exterior styling, which seems far better resolved and better proportioned than that of its predecessor. That there are 12 paint shades to choose from including new Hyper Blue metallic and Manufaktur Monza Grey magno, plus three roof colour options, is the icing on the cake. We can’t wait to take this Bremen-built beauty for a spin very soon!

All figures from Mercedes-Benz; fuel consumption according to WLTP Combined

SL55 4Matic+ shown in grey; new soft top saves 21kg over old vario-roof. The market introduction of this new roadster is set for spring 2022. Hyperanalogue cabin design includes shroud for the driver’s display. New R232 SL is longer, wider and heavier than the outgoing R231. Rear-wheel steering, 4WD, active aero – the R232 has it all!

The SL63 4Matic+ features a newly developed hydraulic suspension system called AMG Active Ride Control (the SL55 gets regular Ride Control). Active hydraulic elements replace the conventional mechanical anti-roll torsion bars and compensate for body roll in fractions of a second. The adaptive shock absorbers have two hydraulic connections – one of them is on the compression side of the damper, the other on the rebound side. The connection of the damper chambers at all four wheels and the lines is made directly via the control valves of the adaptive dampers.

The hydraulic interconnection of the four suspension struts, as well as the pressure regulation of the pump and switching valves allow a very wide roll rate but also reduced roll movements. On the road, this set up increases comfort as even one-sided bumps are individually compensated for, and during fast cornering the hydraulics also actively reduce a loss of camber, ultimately resulting in precise turn-in response all of the time. The hydraulics of the Active Ride Control suspension also feed the optional lift system for the front axle, which lifts the front end by 30mm. “This new-generation roadster is the first SL to feature four-wheel drive – and it’s standard!”