Super-rare Lagonda boasts seven litres, but will its modifications make it a bargain? The magnificent seven.

Few enthusiasts even remember the Lagonda Series 1 – among the rarest of all Aston Martins. This one is best introduced with a few numbers – four doors, seven litres, 480bhp, on Aston’s stand at the 1975 Earl’s Court Motor Show, and on offer for the first time in ten years. 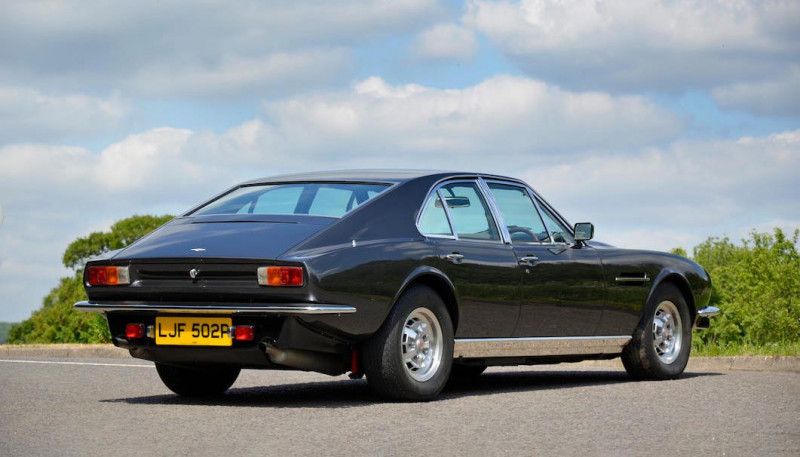 The Lagonda was born out of boss David Brown’s desire for a four-door model that could be chauffeur-driven, but he had sold the company a few years before the vision reached fruition in late 1974. The oil crisis and worldwide recession meant this was not the best time to launch something so thirsty and expensive. It cost 24% more than the already expensive two-door V8 Saloon, whose running gear it shared, though the Lagonda was a foot longer, and heavier. As a result, just seven had been sold by the time it was replaced by the ‘Wedge’ Lagonda in 1976; the car here, chassis L/12006, was the sixth. Bonhams will be offering the Lagonda at its Goodwood Members’ Meeting sale on 10 April. It’s a car the staff are quite familiar with, having handled its last change of hands at the company’s Aston Martin Works sale back in May 2012. Since then it has been driven little more than 200 miles.

Once a rather tired example, the car was restored to perfection for its titled owner in 2006 by the respected Aston Martin specialist RS Williams. But Williams didn’t stop there. It was also treated to the company’s 7.0-litre engine conversion, resulting in a very muscular 480bhp – some 50% more than the original 5.3-litre V8 delivered, and with 200lb ft additional torque to help haul that rather heavy body about.

To handle this the Torqueflite automatic gearbox (only two of the seven Lagondas were sold with a manual ’box) gained an uprated torque converter, and cooling was improved by a larger aluminium radiator with dual fans. Much was also done to improve the car’s ride and handling, and to reduce engine and wind noise. The only visual change is a slightly deeper front spoiler from a V8 ‘Prince of Wales’ model.

Inside, it still looks like the trimmer just finished. At a glance it appears original, though the rear seats have been lowered slightly to improve headroom and the aircon system has been upgraded to full climate control with a later control panel. All good stuff in one way, but those modifications could put some buyers off. The market in general places more importance on originality than it did when the work was done. In 2012 the last buyer paid £337,500. Reflecting those additions and the car’s minimal recent use, which is likely to mean some recommissioning is needed, Bonhams has placed a cautious £200k-300k estimate this time. It is likely to be proved right.

Boisterous performance probably won’t translate into higher bidding for this exceedingly rare Lagonda, and its years of inaction may further help to suppress its value. A potential opportunity, then?