Munich’s new i7 is an all-electric technological tour de force. But will the design gamble pay off?

IS BMW’S CONVICTION BRAVE OR FOOLISH?

In the spotlight: the new i7 G70 and what it can tell us about BMW’s next EV phase

The i7 is the all-electric version of BMW’s new G70 7-series, and it doesn’t care what you think of its design. No, really – the brand’s so confident about the premise, technology and superior refinement of its new luxury EV that insiders view the bold design as a challenge to be embraced by progressive early adopters and to hell with what anyone else thinks. ‘Everyone who chooses a BMW is not conservative,’ head of BMW design Domagoj Dukec tells CAR at the reveal of the luxury duo. ‘Go to a different brand if you want something else.’

BMW positions the new 7-series as a total reset for BMW’s luxury-car offering, echoing the controversial E65 Chris Bangle 7-series of 2001. Confidence and conviction are what’s needed to make it big, even for an already big player like BMW. Why? Because Mercedes has always been the top dog in the segment; JATO figures for 2021 show the S-Class W223 selling around 11,000 units compared with around 5000 examples of the 7-series in Europe.

THE i7 WILL INFLUENCE HOW EVERY FUTURE BMW LOOKS AND FEELS

So BMW is hitting hard with its new i7; screw the days of conservatism in the luxury class – glitzy excess has returned. Want a glowing grille? You’ve got one. Want Swarovski crystals in your headlights? Merc’s been doing that for years. Two-tone paint options? Easy. Rolls makes a killing out of that.

Its approach beneath the skin differs radically from that of its Stuttgart rival, too. Mercedes has chosen to differentiate its electric cars from its internal-combustion ones, while BMW has made its CLAR platform flexible enough to fit multiple powertrains; just look at the pure-electric i4 alongside the petrol and diesel 4-series. 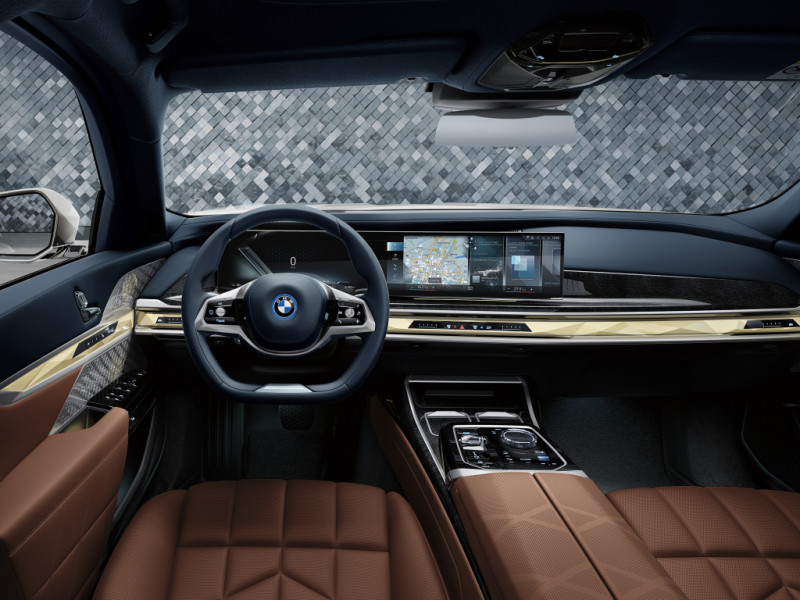 Engineering vice-president Robert Kahlenberg assures CAR that designing a new 7-series this way isn’t compromised, saying that ‘the design of the car is as we want it to be,’ despite the need to share a platform between combustion engine and PHEV versions. ‘From day one it was decided to have all of these different powertrains – we started the process around six years ago.’

MERCEDES HAS ALWAYS BEEN TOP DOG IN THE LUXURY CAR GAME, SO BMW IS HITTING HARD

Only one wheelbase will be available for the i7, which is officially marketed as the long-wheelbase version – no wonder, because at 5391mm long the i7 is actually 130mm longer than the outgoing LWB 7-series, though only 5mm of that sits between front and rear axles. Width also increases 48mm, height by 51mm – big differences.

Kahlenberg tells CAR that every market bar Europe favoured the long-wheelbase version of previous 7s when given the choice, so Munich’s ditched the option altogether: ‘At the end of the day, the current 7-series in the US and China is only available as a long-wheelbase model, so we decided to just have one version overall.’

Like the i4 and iX, the i7 uses e-motors produced without rare metals, and a 101.7kWh battery pack manufactured with renewable energy. Two versions have been announced. The xDrive60 pictured here is available to order now from £107,400. It has all-wheel drive with one motor per axle, 537bhp and 550lb ft on tap for a 0-62mph sprint in 4.7 seconds and a range of 388 miles. Beyond that, BMW has confirmed an i7 M70 will go on sale in 2023, with output peaking at 651bhp – another M-influenced EV like the i4 M50.

All i7s run on air suspension with rear-wheel steering and two ambient ‘IconicSounds’ soundtracks curated by film-score composer Hans Zimmer. ‘Relax’ mode makes the car hum like the music you hear in a yoga class, and ‘expressive’ mode is an air-raid siren given a synthwave remix. Weird.

While the i7 xDrive60 is far quicker than the Mercedes-Benz EQS 450+ you can buy in the UK, the Merc is ahead in other areas – in some cases considerably so. It has the marginally larger battery (107.8kWh plays 101.7kWh), can charge a little quicker (200kW versus 195kW) and goes more than 100 miles further on a charge – that’s according to official figures, at least.

So, if the i7’s a little behind the curve against its biggest rival, how can it really compete? With its interior, that’s how. Having sat inside, poking touchscreens and squeezing seat bolsters, we’re convinced the BMW will be as good as – if not a better place to spend your time than – Merc’s wheeled bar of soap.

All the good bits of the iX are present and correct – the pin-sharp curved instrument/infotainment display and bejewelled interior trinkets – with innovations including cashmere wool as an upholstery option, a rare interior material previously reserved for the likes of Bentley.

Naturally, there are oddities. The steering wheel is an awkward shape and, while immensely attractive, the backlit ‘Interaction Bar’ that runs the width of the dashboard features some fiddly haptic switches. That bar houses most of the interior’s ambient lighting and has animated gestures included in its software, with the central part flashing when your phone’s ringing, for example. Thankfully BMW has kept the iDrive controller in the centre console; it’s a mainstay of the brand’s interior design, now crystallised to full effect and still very much the standard for usability it always has been.

Beyond the familiar, this new i7 introduces EQS-rivalling tech like automatic doors operated by the push of a button, an Executive Lounge package that transforms the rear seat behind the front passenger into a business-class reclining bed, and a backlit panoramic glass roof that comes with its own light show. The pièce de résistance, though, is BMW’s optionally available Theatre Screen – something new not just to BMW but the industry as a whole, it claims. A 31.3-inch 8K touchscreen display folds down from the roof for rear passengers, with Amazon TV built in for streaming video from various sources and touch panels built into the doors. Cars this big and this expensive might target captains of industry, celebrities and billionaire play-people, but they have wider relevance, and the i7 is no different – it will influence how every future BMW looks and feels.

Up-close details and all the technology hidden underneath is already in service in plenty of BMW EVs, with more to come; an iX1 baby SUV is due imminently, and an electric 3-series has just arrived for the Chinese market. Even BMW M is getting in on the electric action; the performance division has already teased how its EVs will sound, and our insiders say the next-generation M5 will be offered as both a plug-in hybrid and 1000bhp battery-electric hyper saloon targeted at Audi’s mooted RS6 e-Tron.

However, even if BMW’s much further ahead than some rivals when it comes to EVs, the success of this latest 7-series remains far from a done deal. The luxury car sector, one of the fastest growing in Europe in 2021, has some of the most discerning clientele and, over many decades, Mercedes has proven that a conservatively designed luxury car can sell in big numbers.

That’s why BMW’s complete change of direction for the 7-series is a make-or-break gamble. Board member for sales, Pieter Nota, calls it ‘the beginning of a new era in the luxury class.’ Whether that new era will be truly successful for BMW and its new saloon duo is a different story.

Cashmere-clad and with glitz aplenty, as well as a real USP: the theatre screen. Flecks of blue are your only hint this is the electric 7-series. Get used to the split headlights and grille – BMW isn’t budging

FROM BRACQ TO RUIN?

Five degrees of separation from E23 to new i7 electric flagship

A Paul Bracq-penned masterpiece, showing BMW could do luxury and be an Ultimate Driving Machine.

The Bangle-era 7-series. While criticism has softened on the 5-series of this era, that’s not so true here.

The i7’s twin, the new 7 was designed alongside it. Boasts all the same tech and luxe, and is PHEV-only in the UK.

While BMW unifies its i7/7-series offerings into one car of many powertrains, Mercedes has split off its EVs into separate models with bespoke platforms and (an equally debatable) design direction. Stuttgart’s luxury flagship has the ultimate range bragging rights, offering 100 miles of extra e-running, but BMW’s fighting back on the tech front.