BMW’s M division turns 50 this year, and it’s doing it in style. There’ll be a CSL version of the M4 and there’ll be this: a big-money, limited-run reboot of the iconic ’70s Batmobile.

As BMW prepares to unveil its very special limited-edition M Hommage tribute to the CSL Batmobile, we reveal the inside story

This is really happening. BMW may still be keeping its rebooted Batmobile secret, but CAR can reveal that finally one of its fantastic retro show cars – the so-called Hommage series – will make production. The real thing will be revealed soon, but for now we’ve put together everything we know to preview BMW M division’s 50th birthday present to itself. 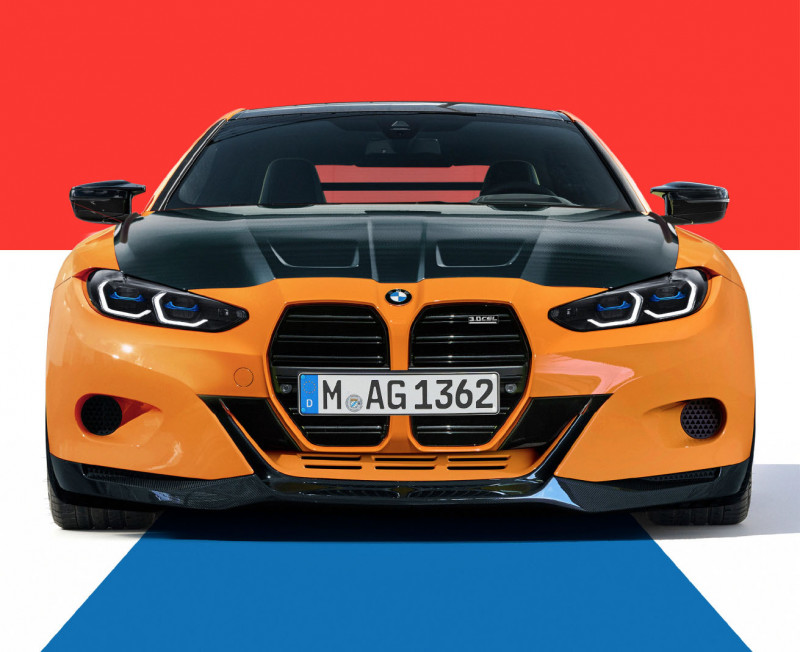 We’ll see the M4 CSL first: that is not this car, but it will provide its building blocks. No, the Hommage will be something quite remarkable: a rear-wheel drive, 592bhp work of art powered by a tuned twin-turbo 3.0-litre straight-six and weighing significantly less than the standard car.

It’s inspired by the CS series of the ’70s, most especially the 3.0 CSL flagship that dominated touring car racing in the era. The final evolution of that car featured lighter windows, doors and bonnet and had a comprehensive aero kit complete with huge rear wing. It was the first production car developed by Motorsport GmbH, masterminded at the time by the former racing driver Jochen Neerpasch. It introduced the legendary M logo, and the trademark red, lilac and blue M colours (although the CSL pictured here is the glorious red/yellow/blue Art Car by Alexander Calder). The M1 that followed was a much more extreme and exclusive piece of kit, but the CSL ‘Batmobile’ remained the pinnacle of M-ness, and inspired the M3, six generations of M5 as well as more recent additions like the M2, M4, M6 and M8. 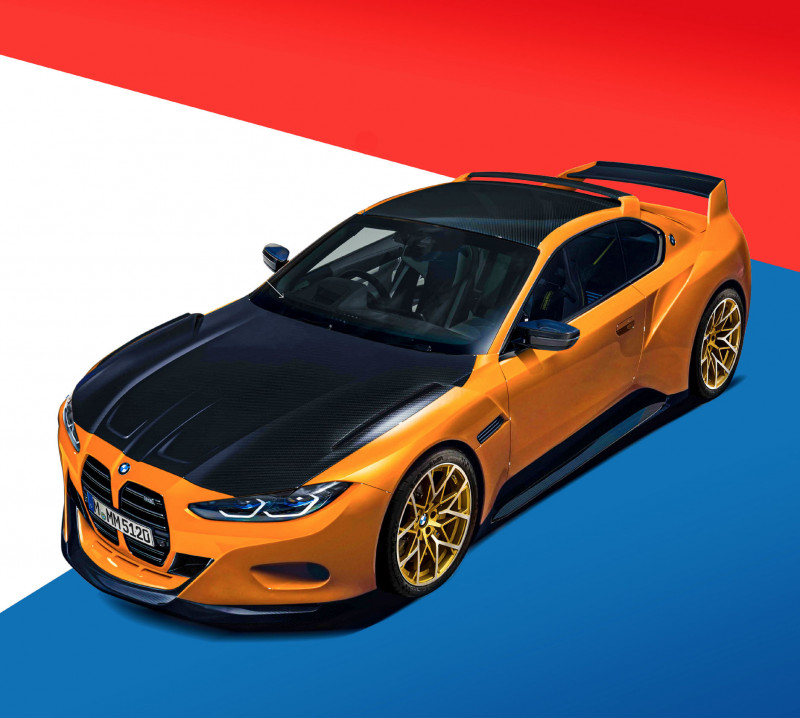 Does this all sound familiar? That’s because in 2015 the ’70s CSL inspired BMW’s then head of design Karim Habib’s 3.0 CSL Hommage, a yellow two-door coupe with dramatic aero, massive wheelarches, psychedelic rear light graphics, modern headlamps and an early anticipation of the love-it-or-hate-it upright rodent-fang grille.

Other Hommage one-offs included 2008’s M1 Hommage (designed by Benoit Jacob) and 2016’s tribute to the 2002 saloon (designed by Alexey Kehza). BMW senior management would love to make the M1 in particular real, but know full well the numbers don’t stack up.

But when they went through the company archives, looking for inspiration for the M division’s 50th birthday special, managing director Frank van Meel and his team did not have to think twice. No model captures M division’s substance, style and spirit more comprehensively than a re-imagined 3.0 CSL Batmobile.

So, what exactly is the new car? Although the original CSL sat on a shortened 7-series platform, its 2022 successor uses the underpinnings of the M4. Not just any M4, but the limited-edition CSL, which sheds 100kg over the mainstream model. While the CSL engine develops 543 instead of 503bhp, the Hommage car ups the ante once more to a lofty 592bhp. That’s supercar terriroty. In combination with even less body fat, the extra horses should bring the 0-62mph acceleration time down to 3.5sec. The top speed will be in excess of 186mph, but less than 200mph due to the need to trade low drag for increased downforce.

Maximum torque is expected to climb to 516lb ft, closer to the 553lb ft peak the faster-shifting eight-speed ZF automatic transmission can handle. All-wheel drive would of course help convert all that grunt into traction, but there is no way the minimalist M Hommage will waste 80kg on a second pair of driven wheels. While the original CSL tipped the scales at a super-slim 1165kg, the unofficial target weight for the 2022 version is 1550kg. To reach this goal will require extreme decontenting, extensive material substitution, miniaturisation and breakthrough concepts like single-piece slide-and-tilt bucket seats, a printed rudimentary back-to-basics instrument panel and a tiny starter battery. These and other changes won’t come cheap, because the investment can only be spread over 50 units, and because more often than not the required fabrication and personalisation require 3D printers.

While the M Hommage is set to cost around £500,000, the slightly more modest M4 CSL – being built in a run of 1000 cars – is tipped to sell for perhaps £120,000. It will be heavier than the Hommage, not quite as potent and not as exotic. But it should be a little quieter and ride with a bit more respect, and the difference in dynamic talent should be negligible on the road.

Why the leap from one-off show cars to limited-run production? Because it’s been proved to work, on several fronts. Supercar makers have been doing a lot of it lately, for instance Lamborghini with the Sian, Centenario and others, Bugatti with quite a roster including the Chiron Super Sport 300+, and Ferrari’s Icona series. High priced, high performance and highly collectible – like a classic but with state-of-the-art engineering and electronics – they reignite the halo effect, sparking fresh conversations about familiar cars, luring in new converts and reinforcing brand loyalty among the faithful. Get them right and they also make money.

And BMW didn’t need to look very far from home for examples of the alchemy that can be achieved by applying a few retro styling cues to familiar metal. Its own two-wheel Motorrad division noticed how old boxer-engined BMW roadsters were being stripped down and hotted up by customisers, and decided to get in on the act itself. The resulting subrange of bikes has brought in some glamour – and younger buyers – to BMW. So why not a ’70s-inspired look for a 2020s super saloon?

You could, being pessimistic, view this as the end of something – of M saloons as we know and love them – rather than the beginning of a new era. Certainly there’s a circularity to this CSL. However, interesting developments in Woking hint at the possibility of high-performance electric Hommage models. We hear McLaren and BMW signed a memorandum of understanding in Munich in late March, detailing the joint development of a new electric sports-car architecture plus related componentry. The two companies have collaborated on various projects in the past, starting with the awesome BMW V12 that powered the McLaren F1.

McLaren doesn’t have the resources to walk down Electric Avenue all by itself. Instead it needs a strong ally to develop cells, e-motors, inverters, electric and electronic architectures, cooling concepts, charging and discharging cycles as well as high-performance operating algorithms.

BMW is in a position to assist, and in return would benefit from McLaren strengths like high-end carbonfibre applications, lightweight design and outstanding vehicle dynamics all the way up to the Senna/P1/Speedtail/ Elva segment. But all of this assumes that McLaren’s much-discussed deal with Audi doesn’t go ahead…

If a BMW-McLaren electric partnership does materialise, the day-today work will almost certainly be masterminded by the M division. Keep thinking along these lines, and the joint powers in charge may in the not too distant future surprise us with a zero-emissions M1 Hommage coupe, which may be even more retro in character but simultaneously even more advanced in concept and content.

Whether or not the McLaren connection comes to anything, the limited-run Hommage M4 is very real. And as rolling embodiment of M division’s first 50 years, what could be better?

A few years back, our man in the US Sam Smith found himself behind the wheel of a ’70s Batmobile, on hot slicks, in a race at Laguna Seca… Here’s what we learned.

‘Driven with bags of throttle, tidy hands and long, slidey apexes, the CSL is dramatic and glorious… The car is absurdly forgiving, and CSLs look great in a slide, and I’m not taking even a hint of a risk with it, so why not?’

⊲DID WE MENTION THE SLIDES?

‘They were designed to be driven by Hans Stuck. He initiated slides well before the turn – you could just about read the writing on the side of the car, he was so far out of shape…’

Yellow matrix headlights and 3D laser rear lights are high on the probability list, but dual sidepipes and extended wingwork simply won’t be possible from a legal standpoint. After all, BMW’s not trying to recreate the race car here, just riff on it.

Perhaps the most easy to love version yet of the M4’s polarising face. The ’70s CSL: function with magnificent form.