Goran Turkic from Tedson Motors recently unveiled the company’s first official car to the public in Monaco. Prior to the event, Total 911 discussed the company’s ethos and passion for backdate 911s.

Monaco is the Mecca of world luxury. Every year they have premieres of supercars and this year our car will have its premiere here when Prince Albert II unveils the car.” That’s a clever move by Tedson Motors’ Goran Turkic to achieve maximum publicity of the latest 911 restomod to join the market, by putting it in front of the right audience. The concept of this car has been brewing for a number of years, though.

“The idea of this car goes way back. I can remember as a five- and six-year-old boy drawing cars and being totally amazed at sports cars, supercars and Formula 1 cars. At age 12 I was drawing cars from BMW, Porsche and Ferrari. I was always looking at how to improve the current cars and coming up with the next generation.

“I’ve lived in Croatia mostly, but also in the United States for a decade or so. I experienced a different world there and I graduated with a degree in physics. So, I understand the technical side of cars a little. For me it’s a love of art and cars. I always view something in its entirety; it’s never just about one aspect.

“The story of the 911 has been written, and it has been written very well. Rob Dickinson at Singer and his team have done a phenomenal job in reinventing the 911 and turning it into this very unique RS-type version. I realised making another one of those would not do the motoring world any favours.

“So I kept looking at all the available restomod 911s and analysing the market. There was something in me that felt like taking a 964 and developing it into a car that would be ready in 2022. I’d say it’s almost diametrically opposite of what some of the other restomods try to achieve. I thought, let’s try to take the car into the future, but to do this I realised would be a significant challenge. You can’t take the car into the future without respecting the current Porsche 911 philosophy, because they’re still building cars today.

“To create something fresh and new, you have to add your own flavour. That was the biggest challenge for me: to balance this car, to make it look like something that would come out of Stuttgart’s factory today, but at the same time give it my own personal touch and feel. I think we did a very good job.”

If you think Goran has had experience in the automotive industry, you’d be wrong. “I’ve never worked in a car company. I’ve worked in a completely different space. As a physicist I worked in the technology and energy sectors. For the past 15 years I’ve specialised in high-voltage energy where I was involved in building power plants.

“I had a 1974 911 Targa while I was living in the USA. I appreciate the car and the original body style. Around seven years ago I bought a 1973 911T. I kept thinking about things I wanted to do to it. Then I decided to leave it as it is, as I believe the long hoods are as pretty as they come. Also, when we start talking about improvements, the platform is just not there – it’s too primitive.

“Then I got a 1975 911, a G model. I decided to try a few things with this car. I think to an extent they’re not as appreciated as some of the other models. Maybe because they were manufactured for 15 years, and there are so many on the market with some being in a really sad state. However, this does lead to reasonable entry-level prices.

“I decided to carry out a little study on it and to do my take on the car. On my Instagram account (@tedson_motors) you’ll find my Carrera GRS. It’s a really fun car, and it was one of those introductory projects during which I learned a lot about the body and the lines. I built it as a street racer with a naked interior. It wasn’t just a stripped-out car for the track, but one you can drive in town. Having done this project, and owning and living with these cars, plus having done thousands of hours of research on the earlier 911s as well as the 964s and 993s, I wanted to do something really special.

“I wanted to first focus on the design – something revolutionary to take this car into the future. This process probably took me a year, where I’d draw different inspirations and take one direction and then retrace. Eventually, I had a conclusive idea about the car and how it should look. Then I scanned an original 964 and, combined with my own drawings, built a 3D model of my design in our CAD program.

At this stage I was very happy with the car. After rendering the car I thought, let’s just very quietly, humbly and shyly, start sharing it with the world. “As I started to reveal it, it exploded. Interest came mainly from social media, phone calls and emails. I realised the love and passion is definitely there. I had created something I liked, but that my peers and the larger Porsche community out there liked as well. There’s clearly a market out there that would like to experience this car in the flesh.

“The next step was to develop the technology for the car. For Daydream, there are two things that need to work together – for me as a person to be happy with my work it can’t be only a beautiful shell. We’ve got the design, but now we needed to develop the technological pack. We need to consider that we’re living in 2022 and not the ’80s and ’90s. Our target market is high net-worth individuals and often they live in metropolitan areas with zero emissions laws. So I decided to develop a high-performance, air-cooled model as well as an electric model. I did a little study on my followers and around 25 per cent would be interested in an electric model.

“The Daydream will be offered with a 4.0-litre, flat six, air-cooled engine infused with hybrid technology via an electric flywheel”

“At the Top Marques show in Monaco we’ll present the air-cooled Daydream model, but in terms of technology we want to make it clear that we’re the first restomod company that will offer the 911 with different technology options for drivetrains. The Daydream will be offered with a 4.0-litre, flat six, air-cooled engine infused with hybrid technology via an electric flywheel. The latter will be fitted in place of the original factory flywheel. We’re doing this in conjunction with Vonnen [part of Elephant Racing in the USA], which offers a slim electric motor that fits between the engine and the transaxle.

“The engine alone develops 390bhp and 427Nm. Combined with the electric motor, the result is 540bhp and 630Nm. The beauty of this system is that you can tune it the way you want to use it. You have a 1kW/h battery that charges and discharges very quickly. You basically have an air-cooled engine on steroids, because the torque is instantaneous. 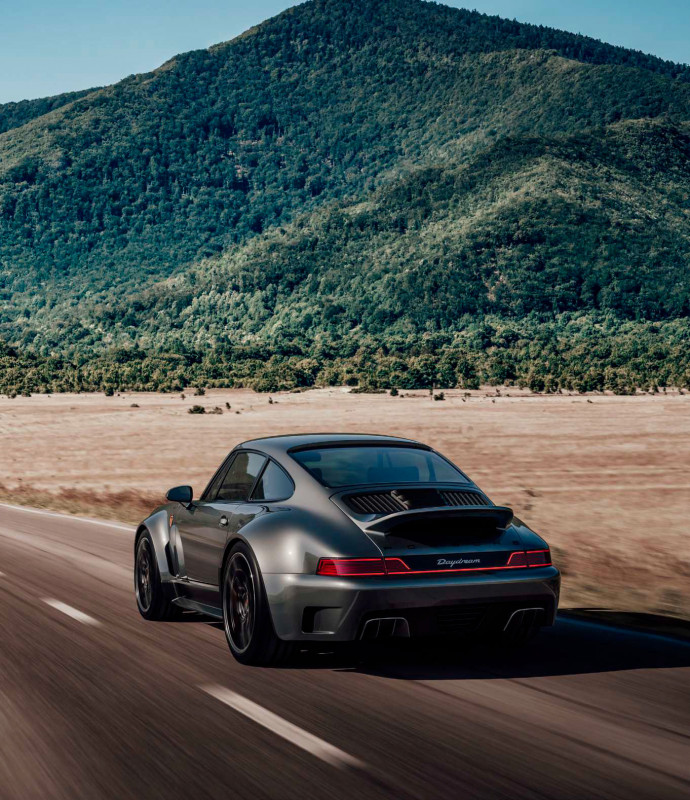 “At the same time we’ll be offering 3.6- and 3.8-litre options. Even though the 4.0-litre is the ultimate in performance, if you want a daily driver you might want to consider the smaller engine options.

“I want Daydream to appeal to people who are in the market for a contemporary car. Today, if you want to be a car company, you need to offer variety and choices. Buyers have different preferences, different driving styles and needs. For me to cater for the market I need to offer my customer a proper platform with some sensible variations on the concept.

“The engine will be a rebuilt unit, and the electric flywheel fitted is also 100 per cent reversible. We’re not doing any cutting or welding of the chassis. We’re using the original five-speed 964 gearbox or we can offer a six-speed gearbox from the 993.”

The rebuilt engine will feature new internals, including pistons, cylinder liners, connecting rods and software. The chassis is galvanised and some strengthening is done in strategic places.

“The car’s body is all carbon fibre. On the show car we’ve kept the steel doors and roof, but the option is there to have that made in carbon fibre as well. The two-tone finish you see in some of the pictures combine naked, clear-coated carbon-fibre panels with other panels that have been painted. I’m extremely proud of the fact that we’ve developed the entire carbon-fibre body in-house.

“At the moment we’re negotiating with a couple of engine builders, both in Europe and the USA. While we specify the parts to be used in-house, the only way to get these types of projects done properly is to get the specialists involved in the assembly tasks as well. We’ve collaborated with JRZ Suspension Engineering. Theirs is a pro-active system with gyro sensors. I’m pretty sure our car will be impressive on the track, but if you add it all up, we didn’t build this car for the track. Even so, fitted with 13-inch wide rims at the rear and 11-inch in front, and offering a fully square track, the car provides great stability.

“This project has been part business and part pure love and passion. This 911 is really the Daydream project’s first-born child. But it’s not only about 911s. I’ve just felt this surge of inspiration to develop a Porsche, but I also see us doing our take on other brands in the future.”

It continues to be an exciting time for modern interpretations of the classic 911. We’re looking forward to getting to grips with the reality of Tedson’s exuberant ‘Daydream’.

BELOW Goran Turkic reveals the Daydream’s engine develops 390bhp and 427Nm, but with the electric motor it can achieve 540bhp and 630Nm