The all new GLC has arrived! The SUV shares its platform with the W206 C-Class and will come with four-cylinder hybrid and plug-in hybrid power.

Two of the petrol variants available at launch are the GLC200 4Matic and the GLC300 4Matic, both featuring the same mild hybrid four-cylinder engine tuned to 201 and 254bhp respectively. The diesel fuelled GLC220d 4Matic X254 returns up to 54.3mpg (WLTP combined) despite having 194bhp. All three models mentioned above feature a 48V integrated starter-generator providing a 23bhp boost, too.

However, it’s the plug-in hybrids that offer maximum efficiency. Petrol variants are the GLC300e 4Matic and GLC400e 4Matic, which feature the same four-cylinder engine linked to a battery and electric motor for system outputs of 309bhp and 376bhp respectively. Equipped with a 31.2kW battery, both models have an electric range of 75 miles with fuel economy rated at 471mpg and CO2 emissions as low as 14g/km. The GLC300de 4Matic is even more impressive, however, its 330bhp diesel-electric system delivering 565mpg with 13g/km CO2 emissions, plus an electric range of 73 miles.

The new GLC’s even smoother styling helps achieve a drag coefficient of just 0.29Cd, which is 0.02 lower than its predecessor and boosts overall efficiency. Slightly longer, lower and wider than before, the new GLC has a 600-litre boot (up 50 litres on the old one) and boasts upgraded sound insulation for improved refinement.

Revised four-link front and multi-link rear suspension should deliver more capability off-road while boosting on-road prowess. Airmatic air suspension, meanwhile, sits on the options list (full UK specifications including trim lines were not confirmed at the time of writing), as does rear axle steering promising to deliver even greater agility and stability.

As you’d expect, there are a host of driver assistance systems, the most interesting of which is a new ‘transparent bonnet’ feature, which entails the central dashboard display of the MBUX infotainment system showing a virtual view under the front of the vehicle when it’s in off-road mode and fitted with 360-degree cameras.

Available to order shortly, prices of the new GLC are expected to start at around £50,000. AMG versions are also in the works, including a replacement for the GLC63 with a two-litre, four-pot turbocharged hybrid engine shared with the upcoming C63. 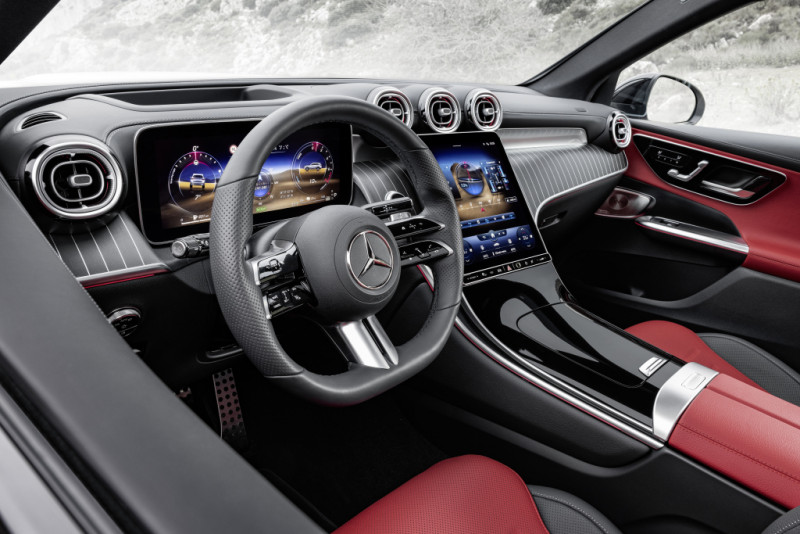