The much-anticipated BMW M3 Touring blends performance with practicality, the 510hp M car is priced from £80,550...

It is finally here. The first ever BMW M3 Touring enjoyed its global premiere at the Goodwood Festival of Speed in June – part of the ongoing celebrations for 50-years of BMW M. As a result we now have full and final details of the highly anticipated wagon based almost entirely on its Saloon relation. 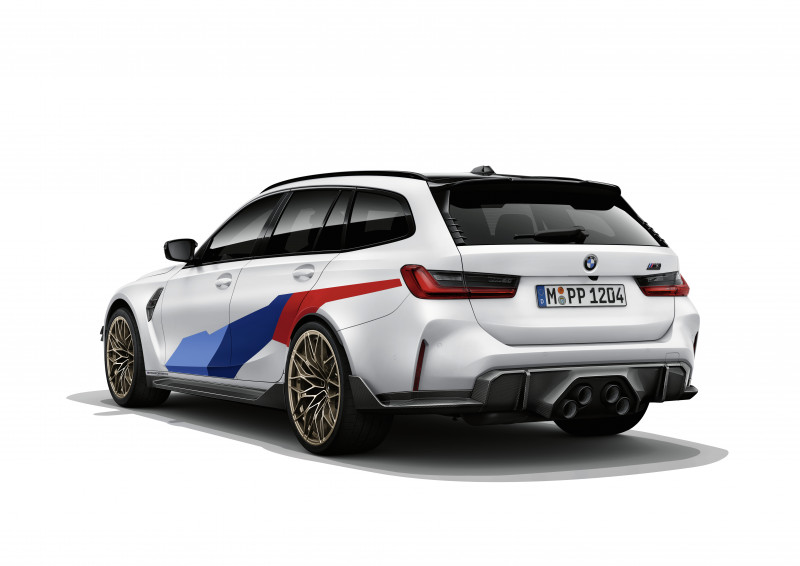 Exclusively available in range-topping Competition guise with M xDrive all-wheel-drive, the M3 Touring is powered by a 510hp six-cylinder in-line turbocharged engine linked to a eight-speed M Steptronic transmission with Drivelogic – power is split between the four wheels as required. The 3.0-litre unit produces maximum torque of 479lb ft between 2,750 and 5,500rpm, its peak output of 510hp comes at 6,250rpm with a redline of 7,200 rpm. The zero-to-62mph dash in completed in 3.6-seconds, 124mph from rest is achieved in 12.9-seconds. Those are impressive figures as they're only slightly slower than its lighter M3 Competition Saloon counterpart with which this car shares much – pretty much as you'd expect. Note that opting for the M Driver’s Package increases the electronically limited top speed from 155 to 174mph.

Adaptive M suspension is a standard feature, the setup differs slightly from the Saloon to account for the additional weight of the Touring. As you'd expect there's also an M specific version of the braking system, it combines six-piston fixed-callipers at the front, singlepiston floating-callipers at the rear – M Carbon ceramic brakes are available as an option.

Exterior signifiers include an M-specific BMW kidney grille, large air intakes, flared wheel arches and side skirts. Those additions contribute to making the new car marginally longer, wider and lower than a common or garden 3 Series Touring, lightweight staggered – 19-inch front, 20-inch rear – finished in Jet Black or Orbit Grey. These can be shod with special track tyres available as an option. An optional M Carbon exterior package includes inlays for the front air intakes and a rear diffuser, plus mirror caps.

Inside you'll find further M-specific features including red accents, Merino leather-trimmed M Sport seats are fitted as standard in the front, M Carbon buckets are available as an option. Note that this is the first M3 to receive the new-look dashboard with its curved display. Other features familiar from previous M cars include the M Traction Control, M Drift Analyser and M Laptimer. Finally, as practicality is this car's USP, the rear seats fold in a 40:20:40 split providing a load capacity between 500- and 1,510-litres.