A historic racer once described as “the best Ferrari ever built” is to be sold at auction. The 1955 Ferrari 410 Sport Spider is one of just two factory-campaigned examples fitted with a 24-spark 4.9-litre V12 engine.

Chassis 0596 and 0598 both had a CM suffix, standing for Carrera Messicana, the race in which they were earmarked to compete. However, when this event was cancelled in the wake of the Le Mans tragedy, Maranello repositioned the 410 Sport to race in the 1956 World Sportscar Championship, debuting at the 1000km of Buenos Aires in January 1956. Chassis 0598 CM was the Scuderia Ferrari team car driven by Juan Manuel Fangio at this event. Carroll Shelby then raced it during 1956 and 1957, winning more events in this car than any other in his career – eight wins and ten podiums. He said it was, “the best Ferrari I ever drove” – a sentiment he cemented by inscribing on the fuel tank: “Mr Ferrari told me that this was the best Ferrari he ever built”.

0598 CM was also raced in period by such drivers as Phil Hill, Masten Gregory, Richie Ginther and Jo Bonnier, scoring a total of 11 victories and 19 podium finishes between 1956 and 1958. Owned by Luigi Chinetti for two decades, it was sold and restored in time to win a trophy at the 1981 Pebble Beach concours. It’s since competed in many historic events and was chosen by Ferrari as one of the 60 most significant models in its history at its 60th anniversary celebrations. 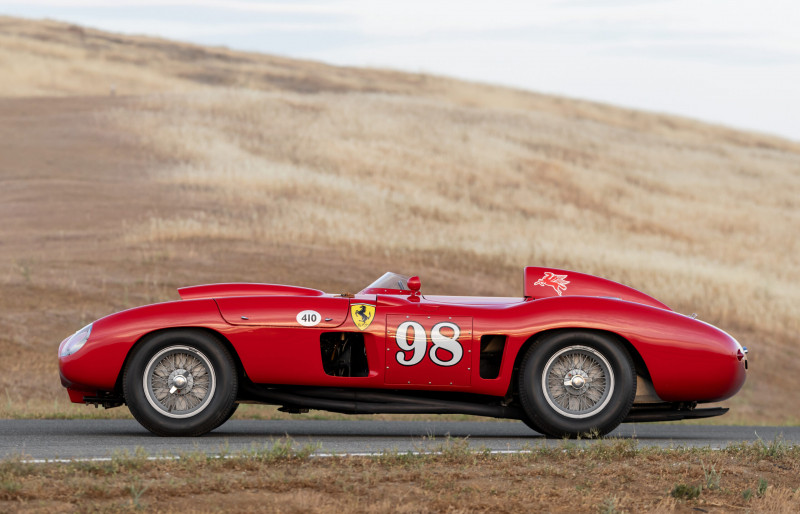 This highly original racer has a matchingnumbers engine, chassis and body, with correct period livery and the original 1957 Nassau racing licence plate. Described as “arguably one of the most significant Ferraris offered at auction” by RM Sotheby’s, the Monterey sale on 18-20 August could be a record-breaking one, with an estimate of $25 million to $30 million