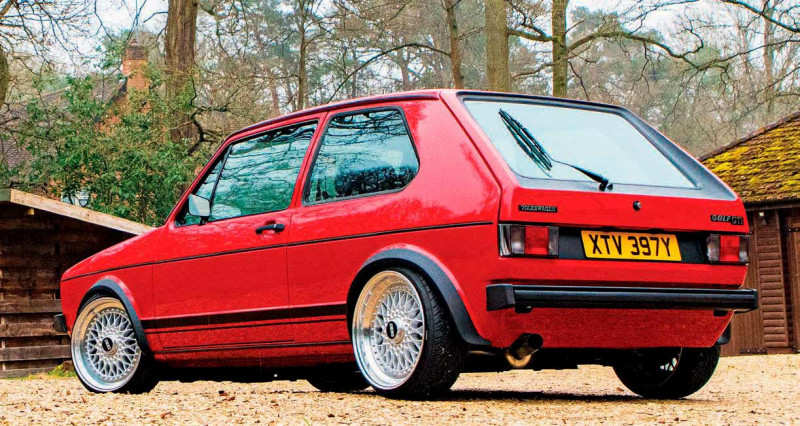 Prittin’s automotive journey began when he was 18 with a 1990 BMW E30 318is but it wasn’t long before his affections turned to Wolfsburg. A Mk3 Golf was purchased a year later in 1993. The pearlescent black beauty was treated to the then highly fashionable period modifications of a Momo steering wheel, Alpine head unit and Cerwin-Vega speakers. Other cars have been and gone including a Mercedes SLK, BMW E60 535i M Sport, BMW X5, Mercedes ML, Porsche 997, Porsche 991 and Golf MK6. An eclectic mix of classic, modern classic and contemporary make up the current collection of two Mk1 GTIs, Mercedes-Benz Pagoda 280SL, Porsche 911 964 C4, Porsche 911 996 C4S, Volvo XC90 and VW ID.3.

Prittin explains where the VWs fit in amongst this esteemed company: “I like to collect cars from the era I grew up in so 80s and 90s vehicles are close to my heart. The MK1s are particularly nostalgic as ever since I was a young teenager, my cousins/older friends used to drive them. I always wanted to own one. They were the first true hot hatch and appealed to me. I have two MK1 GTIs. One is the 1983 Mars Red car you see here and this is my first proper ‘restomod’. The other car is a 1982 silver example and provides a near period experience but I couldn’t resist some mild upgrades such as KW V1 suspension, BBS RM 15” alloys, and Recaro Mk2 Golf Electric seats. The ID.3 is my current daily driver which makes sense given my substantial daily commute to London”. 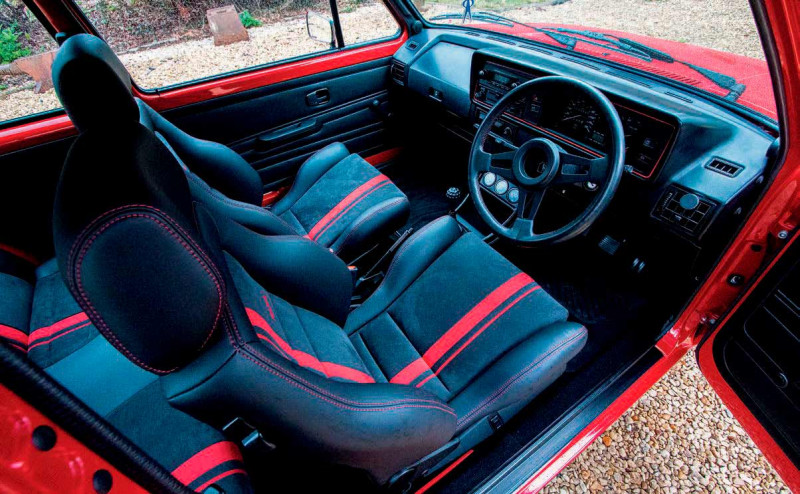 The story of this stunning car starts in 2017 when Prittin saw an impressive Mk1 Golf online. Some cunning Facebook detective work revealed that the car in question belonged to Piotr Smentoch, a Polish enthusiast. Prittin made contact and was referred to revered car builder, Andrzej Roszman of Gdansk, Poland. It was agreed that Andrzej could build a car to Prittin’s exact specification in situ whilst being project managed from the UK. Prittin explained: “I wanted the car to have the complete look that the European’s execute so well, so I had the idea of getting a car actually built in a country where they ‘get it’”.

The hunt was now on for a suitable project base. Prettin found a bargain £800 bodyshell on Gumtree: “It was cheap, straight and solid. I decided that as it was a bare shell I could add what I felt were the best bits and make a car that was better than what came out of the VW factory all those years ago”. A deal was done and the car was soon bound for Polish pastures. 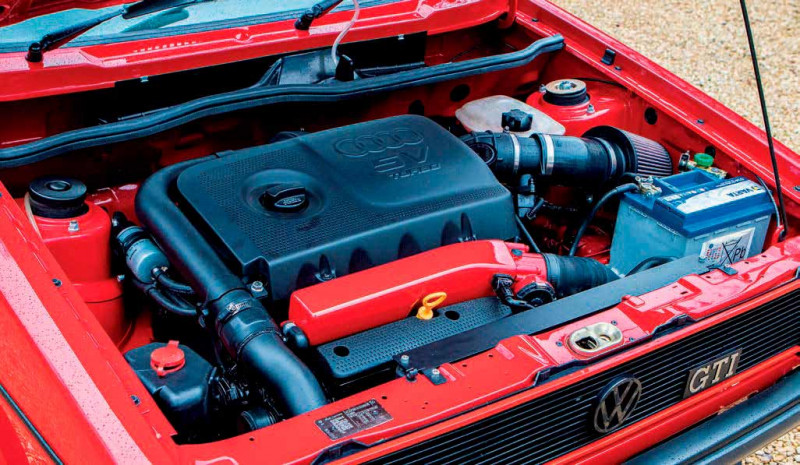 The Mk1 was taken back to bare metal to ensure that paint wasn’t hiding anything sinister. Prittin decided to use a Series 1 boot and rear valance as he liked the minimal look. All dents and imperfections in the metal were corrected and worked on. Coarse factory spot welds were removed and expertly re-executed resulting in the clean faultless look evident in the photographs. Andrzej laid down the iconic Mars Red hue.

Next on the list was the power plant. Prittin decided on a 225 BHP BAM engine for a reliable tried and tested solution. A 2004 Audi TT was liberated of one and it was shipped to Poland. For peace of mind, this was rebuilt before fitting. A bespoke radiator and intercooler were fabricated to keep temperatures safe whilst a K&N induction kit and custom stainless steel exhaust look after breathing and bring the burble.

Part of the attraction to Piotr’s aforementioned inspirational car was the way it sat. H&R Ultra Low coilovers were duly drafted in to achieve the perfect stance over the staggered 17” BBS RS wheels that were built up in Poland. Nankang NS-2 tyres complete the rolling stock package. Prittin explained: “For me, there was only one wheel choice. BBS RS are the holy grail but it's rare to see them in 17” fitment on a Mk1”. Front stock Mk1 GTI brake discs are backed up by a Mk4 Golf 226mm disc and calliper conversion for the rear which is a useful upgrade over the standard drums.

Prittin took time to consider the different elements of the build holistically to ensure that the project flows. The Mars Red exterior with its black stripes, backdated rear, GTI red-trimmed single light grill, and series 1 bumpers complements the interior where the red pinstriped instrument cluster, early steering wheel and period-looking Retrosound head unit continue the classic vibe. VDO gauges are a subtle reminder that this MK1 has the go to match the show. Electric Recaro LS seats from a Mk2 Golf Edition Blue join a rear Mk1 Jetta coupe rear bench. A self-confessed Porschephile, Prettin drew inspiration from the 2018 GT3 and sourced the correct leather and Alcantara to achieve the striped look. This is a clever nod to Stuttgart whilst simultaneously continuing the colour coding. An in-keeping subtle but high-quality audio install includes Rockford Fosgate speakers and an under-seat sub.

Prittin is thrilled with the end result: “I never visited but had hundreds of photos at every stage. It’s incredible, they had my car and I paid them and they built it without me meeting them face to face. All decisions were mine but the execution was by Andrzej. He did a great job”. The deadline of March 2020 was set to avoid potential post-Brexit import difficulties. The car was duly trailered back to the UK complete and on time having taken two years to complete. Ironically enjoying the fruits of a continental build has only been hampered by the global pandemic and Prittin’s plans for the car are simply to enjoy it as soon as he can. It doesn’t get much more international than a car originally made in Wolfsburg, rebuilt in Gdansk, project managed from Farnham that creates a Hollywood smile.

“It was cheap, straight and solid. I decided that as it was a bare shell I could add what I felt were the best bits"

love the car, had many mk1 GTI ‘s in the past and regret parting with them. I’d love to see this car in person! It’s a fantastic build tastefully done! I recall th original gold scrim Poland that inspired this build !!!