Wrong car, wrong time, sums up the troubled history of the glorious Citroën SM. France’s staunch nationalism desired a grande routière to follow the defunct Facel-Vega marque, yet Citroën would have made more profits concentrating on a range of smaller, family cars as an antidote to the rising costs of petrol. The carefree world where you drove from Paris to Saint Tropez before lunch was changing fast.

Even by the SM’s launch in 1970 there were clear signs that fuel prices were climbing and the fuel crisis of 1973 was just around the corner. Ralph Nadar’s campaign to improve vehicle safety in the US was another signal that the automotive tectonic plates were shifting. Bumper heights and headlight regulations meant that the SM could no longer be sold in the US, which dealt a serious blow to future sales. Bosses at Citroën didn’t seem to be listening.

‘Everything about driving and owning an SM needs an alternative mindset, just like today’s Teslas’

Buying a controlling interest in Maserati and asking it to produce a new engine in six months wasn’t one of their best ideas either. Maserati’s chief engineer Giulio Alfieri rose to the challenge and, using tooling from the Indy’s 4.1-litre V8, he sliced off two cylinders to create a V6, which at 2.7 litres neatly slipped under the French Puissance Fiscale tax band. The fact that he cooked up a prototype of this all-aluminium dohc in just three weeks should have set alarm bells ringing. It wasn’t long before the hastily engineered and complex timing chains produced too much vertical vibration, chain stretch, sprocket wear and tensioner failure. There were also issues with oil pumps, ignition and leaking hydraulics. Citroën wasn’t great at sorting out the glitches and owners reluctantly realised that they needed one garage to look after the Citroën running gear and another for the Maserati engine. Sales started well in 1971 at 5000, 4000 in 1972 and 2619 in 1973. But by 1974 had tanked to just 294 and by the final year production in 1975 had trickled down to just 115. At £5200 it was competing with the Porsche 911 and Ferrari Dino and was aimed at a very small pool of dedicated buyers. Total production in five years was 12,920 units and some historians say that Citroën’s £170 million loss between 1968 and 1970 (and its eventual bankruptcy in 1974) was due in large part to the SM’s ambitious vision and hefty development costs. But the world is a better place for that ambitious vision. 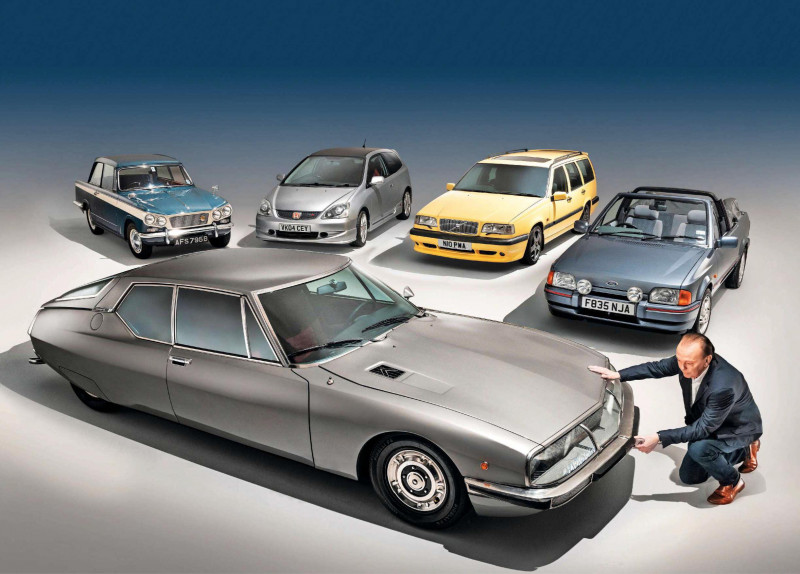 Between pandemics and geopolitics, life can feel gloomy of late. All the more reason to seek out joy – and each of these cars will deliver it in abundance

The SM is the ultimate Citroën, a distillation of all the Gallic idiosyncratic insanity we love about the brand. A fin-de-siècle, front-wheel-drive, 140mph GT, styled with such audacity it looked like a spaceship from another world. And the driving experience is otherworldly too. The two-turns lock-to-lock Diravi variable-assist steering and mushroom brake pedal take some getting used to but at speed the SM is supremely stable, offering effortless high-speed cruising for four. The slightly gruff V6 and slick, gated five-speed transmission encouraged brisk progress but required prudence and finesse. Driving an SM well means learning a new tactile sensitivity. In fact, everything about driving and owning an SM needs an alternative mindset. Like today’s Teslas, so much of the technology was different.

The SM’s labour-intensive unreliability has always cast a shadow over values. But modern specialists have cured most of the quirks and with regular preventive maintenance and some critical mechanical upgrades an SM should be no more unreliable than many big-engined GTs of the same era. Prices and demand have always been soft which is why we think a well-sorted SM looks strong value right now. Back in December 2020 one well-known website sold a gorgeous, fully restored UK-supplied ’72, with 58,000 miles and big history with SM specialists, for £28,750. That’s an extremely tantalising price. Most seem to be advertised around £40k to £50k but we reckon it’s still possible to buy a well-fettled, fine condition SM with all the modern upgrades carried out for less than £40k. Which for one of the most beautiful, bewitching, and captivating cars on the planet would make an incredibly Smart Buy.

‘There’s no avoiding the fact that they are expensive to maintain,’ says owner Norman Walshe. ‘Two jobs will need doing – engine and hydropneumatics. Both need checking out and setting up, often by different specialists – Citroën people for the hydropneumatics system, and a Maserati expert to get the engine’s timing chains changed and valves set. Doing both will set you back £12k – factor this into the purchase price for peace of mind. ‘I bought this one from a lady in northern Italy who’d had it a long time. I restored the velour seats myself – I didn’t want it retrimming in non-original leather. Lance McCormack at Romance of Rust addressed some corrosion on the tail panel, but otherwise the bodywork was ok.’

SMs gained a poor reputation for reliability in period, but specialists can resolve the common issues… at a price. Cabin blends class, a little chintz and utterly unapologetic quirkiness. V6 is a pleasure to exercise once it’s set up properly

Now more than ever, smart buying is about condition, mileage, history and provenance. To retain – or increase – value in this changing market your classic needs to be the proper thing. The real deal with no stories. And that means rebuilt or refreshed mechanicals, straight shimmering paint, equal panel gaps, retrimmed or rejuvenated interior, neat boot and under bonnet areas and lots and lots of paperwork. The veracity of the mileage is important too, so make sure it’s made credible by a paper trail of bills and sheaves of previous MoT certificates. Nobody wants to buy work or projects now. In fact, quite the opposite. The most desirable cars are the ones where successive owners have lost their shirts spending money preserving and pampering their classics. That’s where the strongest value is – where you’re paying sometimes less than a quarter of the total of what’s been spent on a classic over the years. And those deals are out there, more now than ever. As prices soften, more classics will look irresistible by virtue of the sums previously invested by their starry-eyed owners. The shifting market landscape of 2022 could unlock some of the greatest classic car value that we’ve seen for years. Make sure you choose wisely and buy smart.