Introduced to Mercedes-Benz and the first generation SLK at a young age, it was only natural for William Duke to purchase his own roadster two decades later The R170 still looks striking today — a mixture of neat detailing and clean sides.

You might be forgiven for forgetting that, until just recently, Mercedes-Benz still made a compact and relatively affordable sports car. The SLC (internally designated R172) departed production in 2020. Perhaps there ought to have been more of a fanfare, but then the world was rather preoccupied with certain other things to be worrying about the demise of a Mercedes with a folding hardtop. By the time it left us, the SLC had pretty well been overshadowed by SUVs and electric cars, among other vehicles. It deserved a better send-off, to be honest. 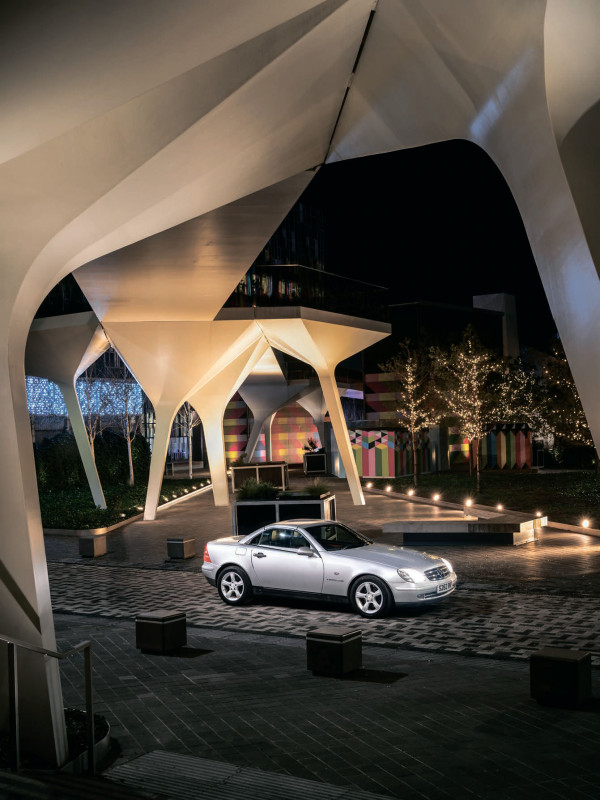 Of course, wind back the clock and it was all so different. Back in 1996, the SLK took the world by storm. Back then, long before Mercedes switched the last letter to reflect the car’s C-Class DNA, SLK stood for Sportlich (sporty), Leicht (light) and Kurz (short/compact). To be fair, that ‘K’ could also have stood for Kompressor, because the SLK launched with a pair of supercharged petrol engines – 2.0-litre and 2.3-litre – developing nearly 190bhp. That doesn’t sound like much now, but this was 1996 and the original SLK weighed in at around 1,300kg, so it wasn’t going to be hanging about. 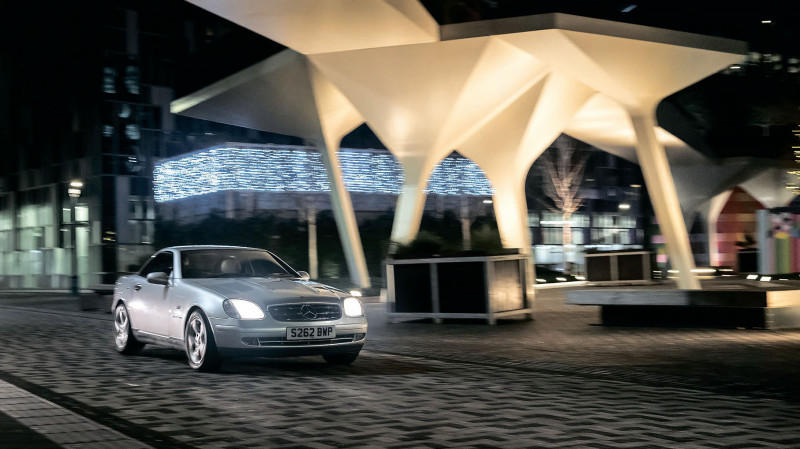 You could have had a naturally aspirated 2.0-litre too, and eventually there were V6 and AMG V6 options, but none of the mechanical bits (largely donated from the W202 C-Class and 208-series CLK) were of much interest once you’d seen it. Michael Mauer’s design, previewed by a 1994 concept car, still looks striking today – a mixture of neat detailing and clean sides, with a pert rear end that looks way too small to contain the folding metal roof. 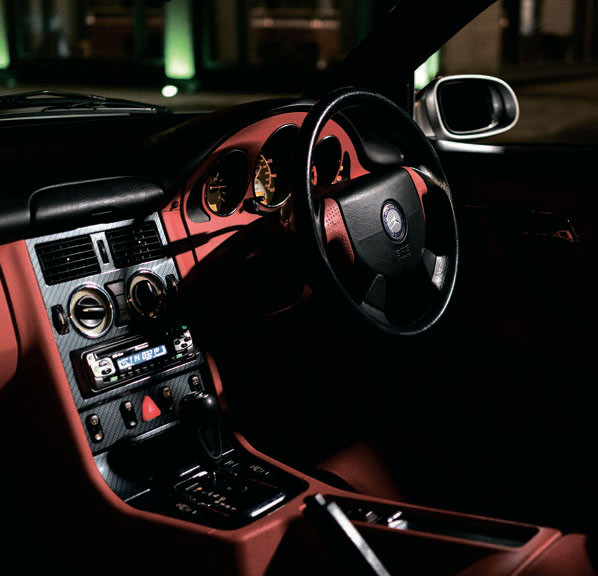 Ah yes, the vario-roof – the SLK’s calling card, turning it from secure and safe coupe to open roadster in a few seconds. Twenty-five seconds to be exact, and it made for street theatre, with the whole rear end of the car pivoting backwards to allow the roof to furl or unfurl. Folding hardtops would be 10-a-penny within a few years, but when the SLK was launched, this was serious novelty.

Little wonder that celebrities rushed to buy one. Posh Spice was an early customer, as too were Kylie and Dannii Minogue (apparently they shared theirs, which must have made for some interesting sisterly arguments of a Friday evening). Even the great Bill Murray had an SLK, proving that its appeal spread wide across both characters and generations.

Age is no barrier

Speaking of which, meet William Duke. He’s a man of impeccable taste. Not only does he own an original SLK, in the most desirable colour, but he’s also an avid reader of Mercedes Enthusiast. “My love of cars and Mercedes came from my dad and my grandad,” begins the 22-year old. “When my grandad left his original job, he became a wedding chauffeur and so there were always Mercedes around. My dad grew up in the back of these cars, being dropped off to school and so on, and it rubbed off on me, too.” So, why an SLK? Well, it turns out that there’s SLK history in the family. “My dad had an SLK just before I was born. He bought it in 1998, just after they came out. There was a waiting list at the time, so he had to go for a bright yellow one because I guess fewer people wanted that colour. And then he found out that my mum was pregnant with me. So obviously they had to get rid of the car and get something more sensible, although they did keep the SLK long enough for there to be a couple of photos of me sitting in it as a baby.” 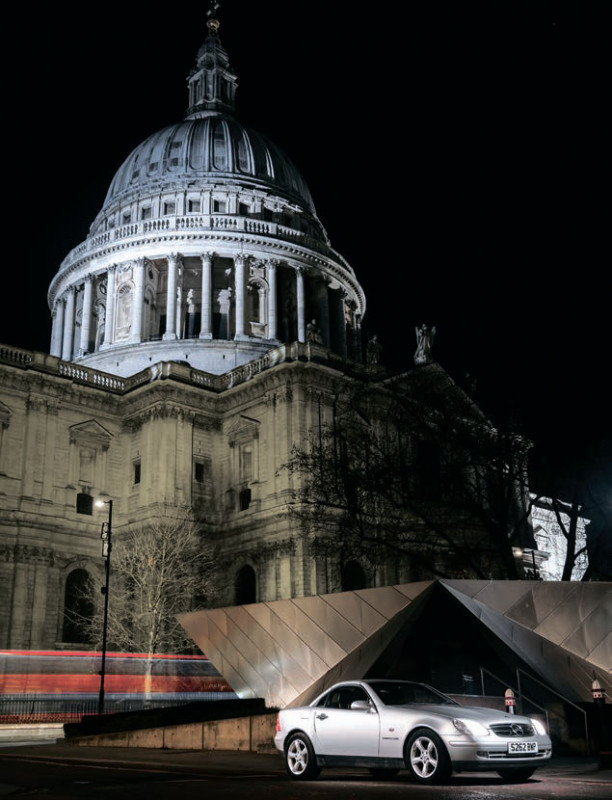 Clearly, such early exposure to SLKs triggered something in Will. “We live in Brentwood, and a new classic car dealer opened up nearby, so obviously we had to go and check that out. To my surprise, they actually had one – an SLK – just sitting there in the corner. Really low mileage – 38,000 – and with just two previous owners. It seemed like an omen or something because I’m standing there with my mum and she’s loving it, going on about it being the same year and the same style as their old one. Aside from the colour – this one is Brilliant Silver. The price was only a couple of grand, so we kind of had to have it.”

For a car with a list price of £34,000 in 1998, getting one now with that kind of mileage seems like a staggering bargain, but Will isn’t treating the car with kid gloves. He’s using it, which sounds like a far better driving experience for a 22-year old than driving the all-too-predictable, clapped-out Fiesta or Corsa. “I don’t daily drive it — I have a Mini for everyday stuff. But I do drive it quite a bit, and it always gets looks. I’ve even had people coming up to me for a chat about it. That never happens with the Mini. I think being younger and driving a car like the SLK makes it a bit more unusual. People don’t expect me to have a car like that.” Happily, the SLK has given Will no trouble despite his dad advising caution when it came to Mercs from the early 2000s. “This one comes in just under that line. I think I’ve kind of got away with it and have had no engine or gearbox trouble. There’s an aftermarket immobiliser – well, it is a car from the 1990s – and that caused some ruckus. When we went to pick up the car, it wouldn’t start and the roof wasn’t working. The poor dealer was panicking, saying, ‘I swear it was all working fine this morning’, but we traced it to the immobiliser.” Just as important as working out the immobiliser is working out exactly what kind of car the SLK is. Thankfully, Will seems to have cottoned on pretty quickly. “It’s not a sports car,” he says. “That is a fact. It’s definitely not a sports car. It looks like one, and it feels sporty when you sit behind the wheel, but it’s the most relaxing, refined and quiet car I’ve driven.”

It really does seem like Will was fated to drive and own an SLK. Not only was there that lost and lamented yellow one, but he actually drove one when he was just a child. Sort of. “When I was younger, my grandad got me one of those electric toy cars for kids. And, yes, it really was a silver SLK. There are pictures of me driving it in the park. It’s one of those things where you see those photos and then you see this car, and it all kind of makes sense. Twenty years later, I’ve got the full-sized version.”

From electric ride-on to owning the real thing!

St Paul's Cathedral made quite the backdrop.

Red and black tones ramp up the sporty vibes.

230 four-cyl the range topper until the V6 arrived.

First-gen SLK on the prowl in the City of London.

All figures from Mercedes-Benz for a pre-facelift 1998 car as pictured; fuel consumption according to NEDC combined

The price was only a couple of grand, so we kind of had to have it

The SLK is ludicrously cheap for a convertible Mercedes-Benz. You can pick up a car that’s failed its MOT for under £1,000 if you’re feeling brave and have access to your own inspection pit and toolkit. You don’t have to spend much to get a far nicer one, either — around £1,700 to £2,000 will get you a decent car with some history. In fact, if you spend just a little more, around £2,500 to £3,000, you’ll get some of the best around, even a late 3.2-litre V6-engined model. It’s only the supercharged AMG V6 versions that hit five-figure sums, and even then that would have to be a very low-mile car, with lots of service history.

Rust is the enemy — an early SLK can almost literally rust anywhere — but it’s generally cosmetic rather than structural. If the roof isn’t working, it’s likely down to a microswitch issue, which isn’t necessarily expensive, but it can be fiddly to fix. Both four-cylinder and V6 engines are exceptionally tough as long as you give them a regular service, and keep an eye out for minor electrical and electronic issues.