Back in the day the Jetta was deemed the ugly duckling of the VW family but, as this issue of the magazine has proven, that couldn’t be further from the truth these days. Words: Bryan McCarthy. Photos: Rick Di Corpo.

It’s a tough ask for someone to predict the future 20 years on, especially when it comes to the modified VW scene. Try to think back double decades — would you have guessed you’d be where you are today? Maxime Bouliane’s relationship with his Mk1 Jetta Coupe started just beyond the turn of the century and I’m sure he wouldn’t have guessed his slow going budget build would have ended up on the pages of PVW. In fact, the progression of his Coupe was more of a relaxed pace than an all-out sprint.

“When I was four, my dad had a 1981 Jetta Mk1.” Like most of our features, Maxime, a 40-year-old hospital maintenance mechanic from Ange-Gardien, Quebec, Canada, was exposed at an early age. “I remember looking at the heating control panel wondering the meaning of the triangle and the square position.” And like many, it’s usually the trivial details we can recall. Ten years on, Maxime’s father had a Mk2 GTI 8v, so when it came time for a car of his own, there were no doubts it would have the letters V and W on the front.

“One day in my hometown, I saw a Mars red Mk1 GLI coupe. I never knew that they had made a coupe version of my dad’s car, [so] I started searching for one.” Maxime never found a decent one before starting college, and instead landed on a 1992 Golf Wolfsburg. “I was in an aeronautic school learning about building planes and all my friends were in musical school except one. My father never pushed me to do mechanics, but when I saw that one friend do his own oil service and changing his tire I thought that I would be able to do it. I bought a 1981 2-door Rabbit for $300 to learn to work on cars.” 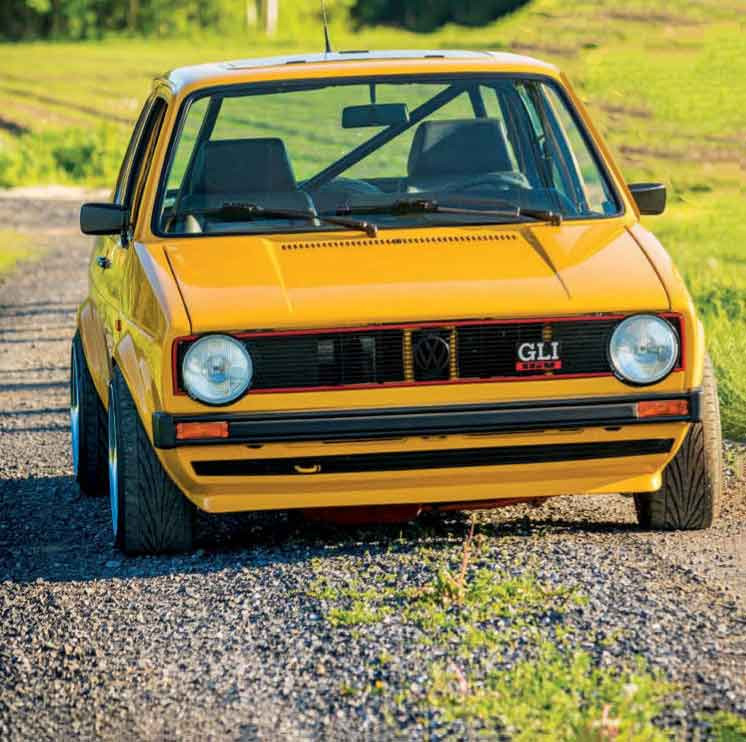 As I’m sure you guessed, the car before you on these pages is not a Rabbit. Nor is it from the UK like a certain other yellow Mk1 Jetta Coupe in the mag is. Our hero vehicle is about to enter the story soon enough though. “One of my friends, Francis, who was playing drums, quit musical school for a tinsmith school. His family was building and racing big V8s on dirt tracks for three generations. When he saw my Rabbit, he started to modify it with me.” In the early 2000s, Maxime tells us, people weren’t too keen on Mk1s. “Everybody wanted a Mk3 VR6 or a Mk2 VR6,” he opines.

“When searching for Mk1 parts, people were laughing at us. Then arrived the day that I found a PVW magazine in a store.” Inside the issue he was holding was a modified Mk1, inspiring him and Francis to one day have a speed shop dedicated to Mk1s and Mk2s.

Most of the local older VWs were rusty, and being the early age of the Internet, it wasn’t as if they could pop ‘replacement panels’ into Google (more like Ask Jeeves) to be connected to someone selling them. “[At 21-years-old], we didn’t take ourselves seriously and knew that our car (the Rabbit, not the Jetta Coupe yet) would not be perfect so we decided to name our ‘company’ Asscomotorsport. In English we would say a shitty company, but in French we are saying “une compagnie de cul” and cul in English is ass. ASS-CO. So Assco was born just to put a name on the car that we were building for us. Assco is more of a philosophy than a company.”

It was in 2002 that the Jetta Coupe finally entered the picture. Francis alerted Maxime on the car, and with 408k kilometres and a blown engine, it was purchased for just $400. Maxime began working on the car in his spare time. “It was a couple of months after the 9/11 attack and all my friends at aeronautic school had difficulties finding a job. I decided to quit school and started working in an import car garage.” With funds coming in from his new employment, Maxime was able to continue working on the Jetta. Some time afterwards, Francis hit on another car for him — the Mars red GLI from the beginning of our story was languishing in a scrap yard with broken glass and a badly damaged roof. “I bought the car for $50 and delivered it with my other coupe to Francis’ place. It had all the body panels that I needed to finish my car.” 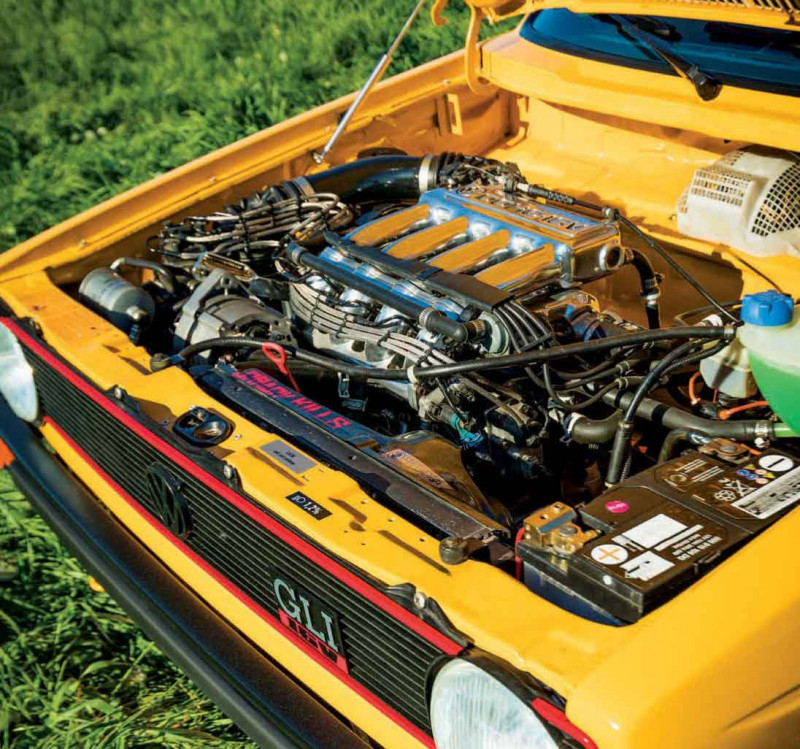 Finish is a relative term, of course, as it would still be years before a period could be put at the end of the Coupe’s sentence. In 2004, Francis invited Maxime to join a garage band that was exactly that — they practiced in a 125-year-old building formerly owned by Goodyear. Not only was it a place to rock, but Maxime could work on his cars there as well. He also changed trades and took up welding as a way to not just improve his skills in the shop, but his living conditions as well.

The Jetta Coupe was once again a priority, with Maxime devoting 6-8 hours per week on it. “I was a full-time welder with a girlfriend, so time to spend on an old rust bucket was hard to find. I stripped the car to see what kind of damage the car had. The front floor was completely damaged and all the rear of the trunk was rusty. I still had some parts off of the Mars red GLI, but not the trunk floor.” As with anything when you’re just starting out, Maxime made some mistakes while welding, but always learned, improved and moved on. He fabricated his own trunk floor, and by deleting the spare tire well, was able to route the exhaust out through the centre. A drawback of spending all that time in an old building? It can play games with your psyche. “Sometimes, between 12 and 1am, I could hear doors closing in the old shop when I was alone in the place. It was so spooky.”

Fast forward to 2008 and the Canadian paper crisis (that’s a thing) lead to Maxime getting six months off that enabled him to continue working on the Jetta. “It was slow going, but it was a fun time. Drinking beers with friends, playing music. I gave the love and passion of old VWs to a lot of my friends and some of them still own one today.”

Up front, Maxime utilised a single-round headlight look, but with a custom touch. “There were not a lot of VWs with round headlights in Quebec and I always loved the dual round lights. I didn’t want to put a Cabriolet front end because I wanted to keep the lower portion of the Jetta (the front spoiler and the impossible-to- find plastic strip). I just modified the headlight section and the side marker section of the wings.” The only real tell that it’s not a cut and paste job is the thicker bit of metal flanking the headlights. 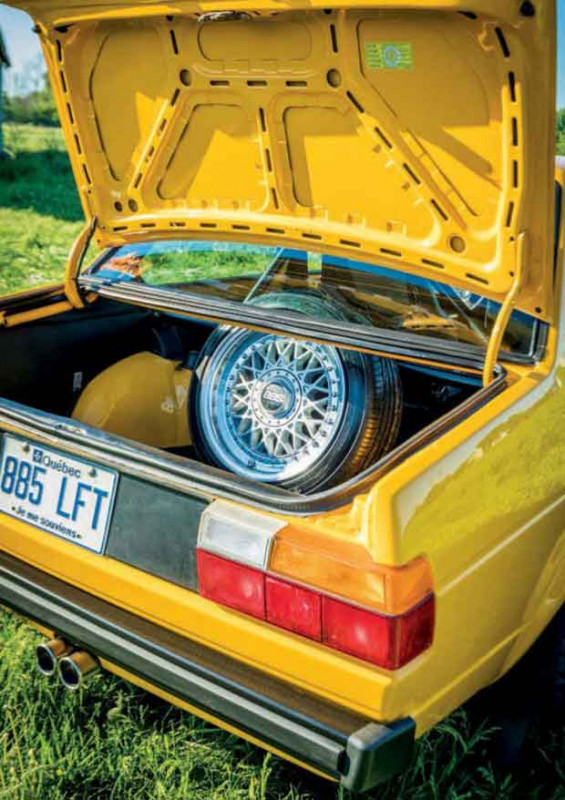 Between the fenders lies a relatively stock motor — from a Scirocco 16V that is. The intake manifold was hand polished by Maxime himself. “I started thinking that it would have been cool if VW had built a Mk1 Jetta Coupe 16V,” Maxime explains. “In 2010, I bought a Scirocco 16v for parts, so I took all the 16v parts on it (brakes, booster, sway bar, cluster, engine, roof antenna, etc). I also kept the leather wrapped 4 horns steering because it brings me so many memories. Seeing it [reminds me of] sitting in my dad’s car and wondering why it had four horns. The old worn leather gives it a sporty feeling and it fits perfectly with the Jetta Trophy leather shift knob.”

In 2012, the Coupe was relocated to Francis’ brother, Carl’s place for him to spray some color on the car. Keeping within budget, Carl offered to paint the car for a reasonable cost. We’re sure many of the readership has had similar experiences — a job on the cheap usually takes more time than your standard shop assignment. As such, it was in Carl’s possession for two years. Within that time, Maxime was able to get some other things in order, including a Scirocco 16v project and purchasing a home with his girlfriend. A large barn on the new property was the perfect space for projects, and Maxime was also able to wrench on his daily driven Mk2 GTI 16v.

Two years on, and Maxime’s priorities had shifted once again. He was about to become a father and had more work to do on his house. Beers, friends and music took a backseat to the other responsibilities of life. Then in 2014, Maxime had found out that Francis passed away unexpectedly at the young age of 34. “The fact that Francis found this car and I have built something out of it, makes the Jetta very important for me. His brother finished the paint in 2015 and I started working on the car again.” Given that Maxime’s first language is French, we had to double check when he said the colour was “Old Cat Yellow” and not old car.

“The colour of the car came from a visit at Carquest to see Francis’ brother (he was mixing paint there),” Maxime informs us. “I passed by a spray paint can with a name written on it “Old Cat Yellow”. I took the can and told him that I wanted this colour.” Further questioning explained it was short for Caterpillar construction machinery, which makes sense.

Moving inside and you’ll notice it’s fairly factory, with some added (or removed, in some cases) touches. The six-point cage was constructed by Maxime and Francis, but the crown jewels are no doubt the Recaro Trophy front, and only, seats. “All those years, I was collecting parts for the Jetta but I was still missing the seats. I wanted Recaro Trophy seats to go with the GLI 16v theme. It took me six seats to be able to make two good seats.” The reason for the opening between the trunk and the cabin? Maxime was planning on sleeping in the car during a massive road trip from Quebec to California. Sadly, the trip hasn’t materialised (yet?), but the void definitely becomes a talking point.

Maxime finished the car in 2017, a year after his second daughter was born. In keeping with factory 16v offerings, the wheels are BBS RMs and the fender gap was reduced courtesy of FK coilovers. KW V3s are being swapped in place of the FKs in the near future, leading us to believe that once again, projects are never done.

So what’s in store for the Jetta? When queried, it sounds like there are a few bits to still be polished under the hood, which Maxime will do himself. He did all of the work, save for the paint and the cage. “The car was build on a budget and it took a long time to build,” Maxime muses. “Time is the most valuable part of the build and looking back, it’s been a part of my life since the last 20 years and now that it’s finished, I see that it’s a time-lapse of my life.” 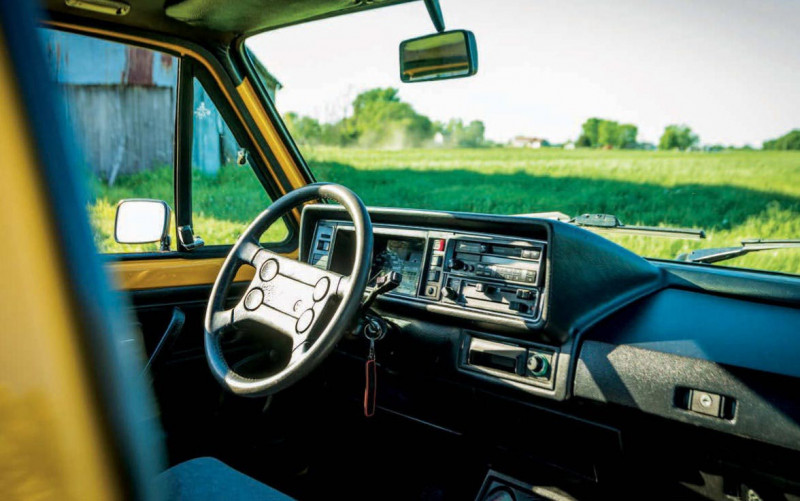