Those without an encyclopedic knowledge of BMW model timelines would be forgiven for assuming that the. E85 Z4 is far younger than its years. 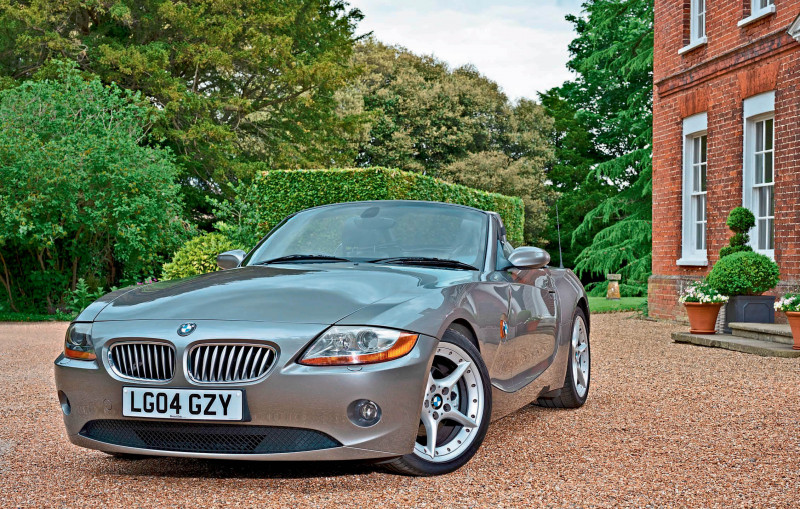 Somewhat cutting edge, even a tiny bit radical, at launch, its distinctive style and sharp lines have aged very gracefully – without the need for the cosmetic nip and tuck so many mainstay models its junior have required to stay fresh. Indeed, believe it or not the E85 was unveiled to the public all the way back in 2002 at the Paris Motor Show, the replacement for the Z3 gave a nod to its predecessor but employed far more modern styling cues and E46 3 Series mechanicals. One of the first BMWs to utilise the ‘Flame Surfacing’ design language of the era, for some its looks were a step too far, for others an instant hit. That long bonnet and short rear overhang certainly gave it an image all of its own and in hindsight its looks have lasted – today the Z4 looks every inch the modern sports car. Lighter in weight than the Z3 before it, the 1335kg Z4 was a larger yet more agile BMW, but with its diet did not come rigidity issues – this was a far stiffer and more focused prospect than its forebear. In fact, the Z4 was almost three- times stiffer than the Z3 which helped it eliminate the inherent scuttle shake for which its predecessor had been so criticised. 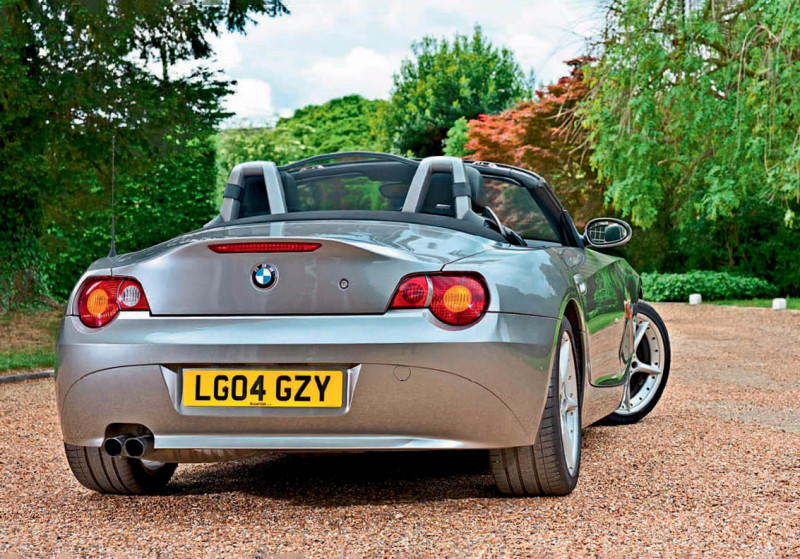 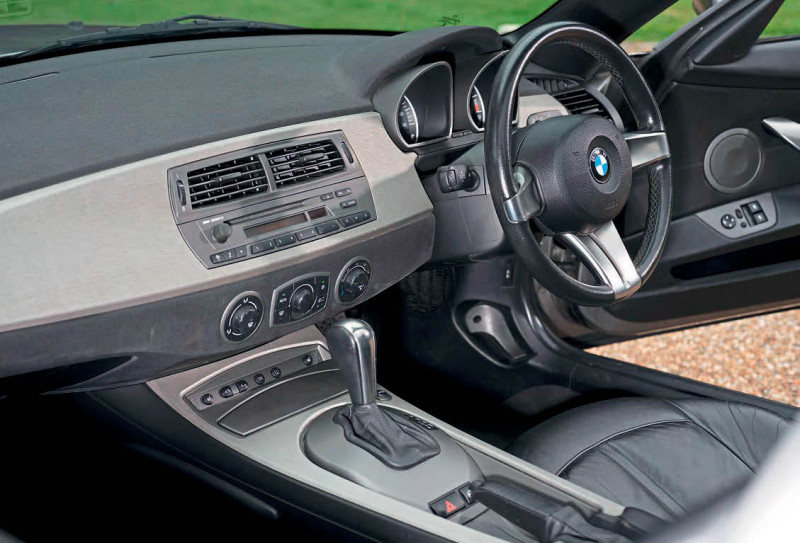 While both featured electric power steering, run-flat tyres, an electric hood (taking a swift 10-seconds to raise or lower), sports seats, air-conditioning and that ‘must have’ of 2003 – a CD player, you’d miss out on a few choice bits were you to buy a 2.5- over the 3.0-litre car. Chief amongst those parts were six forward gears in the 3.0i, just five- speeds being available in the 2.5 version, the more expensive Z4 also gained an inch on its wheels with 17-inch diameter rims all around, a leather interior over the 2.5 car’s cloth upholstery, and M Sport suspension. Naturally there were options aplenty available should one wish to tick those boxes. Satellite- navigation, larger alloys, cruise control, Xenon headlights and – if an automatic was required – either the five-speed Steptronic or sequential six-speed SMG – both robbed from the E46 3 Series parts bin. The manual gearbox is largely preferred over the automatics by BMW enthusiasts as a rule. 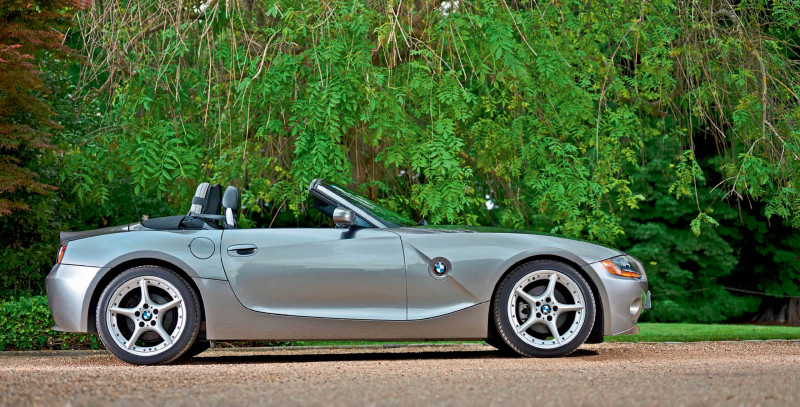 Towards the end of 2003 came the addition of a 2.2i model with the 170hp six- cylinder engine from the 2.0-litre E46 and E39 – priced at £24,255. Slightly more sluggish than the 2.5i, 0-62 took 7.7-seconds, with foot planted for long enough a top speed of 140mph would be reached. Sidestepping Alpina’s Roadster S version of the Z4 which arrived next, in 2005 a new four- cylinder variant came along – powered by the Valvetronic 2.0i motor. Cheaper still at £22,755 it was partly watered down in every regard but that didn’t make it a bad buy. The main takeaway? It produced 150hp and took 8.2-seconds to reach the milestone 62mph. 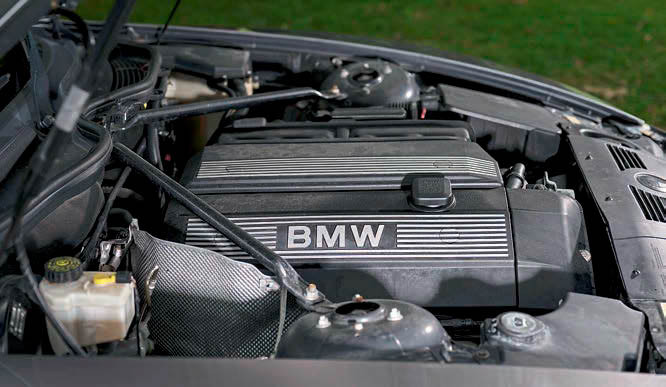 Two years on from its launch came the obligatory LCI (Life Cycle Impluse) facelift, but the alterations were mild to say the least and largely took a qualification in BMW design to spot. In short it was a ‘lights and bumpers’ job. While the 2.0i four-cylinder engine remained, three new six-cylinder mills arrived lifted from the – then new – E90 generation 3 Series. These new lighter in weight N54 units came in 2.5i (177hp), 2.5si (218hp), and 3.0si (265hp) form and as you’d expect performance was improved across the board with equal gains in economy and lower emissions figures, too. The range-topping Sport trim level afforded owners M Sport suspension and 18- inch wheels, prices ranged from £22,945 to £34,195. With these new models, just as was the case with their predecessors, there was no really bad choice, meaning whichever model you opted for driving fun was pretty much a guarantee, the only real question was how fast you wanted to travel and how hard – or focused – you liked your Z4’s ride. It was all in the driving experience. 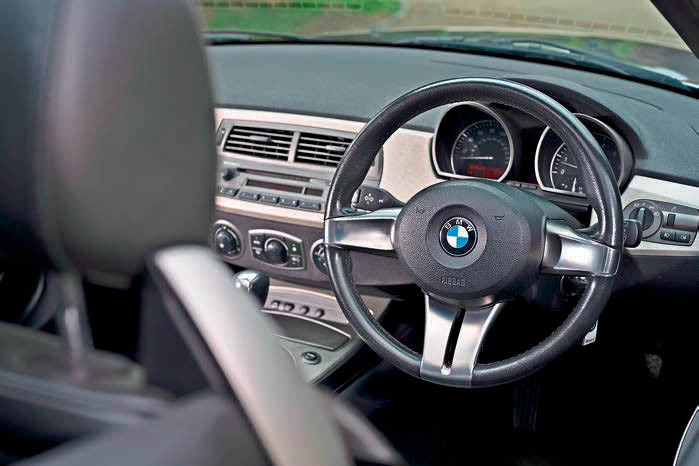 So, just how did folk like the way their Z4s drove? The only real criticism of the Z4 early on was the styling, in terms of the way it drove, all versions were a resounding hit – even the later four-cylinder variant. Of course not everyone was totally happy and the nit-pickers had a few gripes about the electric assisted steering system which was, admittedly, not quite as granular or weighty as the hydraulic systems of old. And, by now it probably goes without saying that the run-flat tyres were not popular leading to many owners opting to replace them with traditional rubber at each corner. 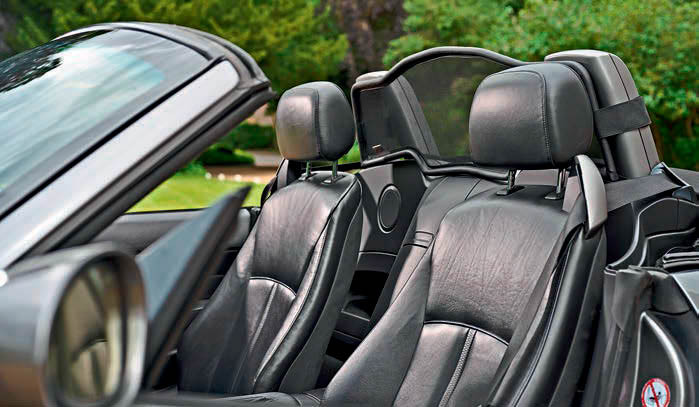 Despite its looks not giving the game away early examples of the Z4 are now getting on a bit – many are approaching 20-years old now which places them firmly in the ‘modern classic’ camp. Before you pen a list of things to check on any prospective Z4 purchase, however, you need to decide which version to buy. For many the later 3.0si has long been the pick of the bunch, but it has to be said that the earlier 3.0i is an equally attractive prospect, its corner ably fought by the stunning 2004 car you see here in our pictures. It is possible to pick one of these cars early E85 3.0i models up today – with its sonorous straight-six – for just £4,000, £1000 to £2000 less than the asking price of most 3.0si models, which makes them an exceptionally attractive option – especially as a way to catch some late summer sunshine.

Now, it goes without saying that any potential purchase should be given a thorough look over in every area, search for the usual signs of accident damage and neglect, but when it comes to an early Z4 rust shouldn’t be a problem – happily these cars don’t suffer as badly as their peers from other manufacturers. You should certainly check the operation of the power hood, and that the glass rear window is attached all the way around (check too that the heater element is not damaged). Ensure that the headlining isn’t sagging too. However, if you check nothing else ensure to examine the drain holes properly, as with most convertibles, should these become blocked water has nowhere to go and it can ingress into the cabin. On the Z4 this is especially concerning as it has a habit of collecting around the soft top motor leading to failure. You can often literally hear water moving around behind your head while driving if things are really bad. And while you can unblock them yourself consider the damage already done. Note that roof micro- switches have also been known to fail.

While you’re looking around outside, busted window regulators are not uncommon and can lead to the door glass disappearing into the door. Check the bonnet is straight, it is aluminium and therefore removing dents can be tricky, mechanisms are also known weak spots. The headlights should be free from any sign of moisture – new units can be expensive to replace, the exhaust systems on some cars will have been replaced with stainless steel items by now but if not check that the rear box especially is not rusted through.

Sticky door handles are not uncommon and sometimes simple lubrication will not suffice leading to replacement. Inside it’s the usual suspects, check the operation of each item and listen for any seriously annoying rattles. These cars are getting on in years now so there will be some noises, but they were known for squeaks and rattles almost from new so, buyer beware but be realistic.

Now, the more serious concern whenever buying a car is the mechanicals. Of the nine different models the engines are less of a concern than you might first imagine, the early M54 six-cylinder engine – as found in the car pictured here – is a good motor for the large part, watch for faulty coil packs or sensors causing misfires and emissions warning lights.

It can use oil too, up to 1000-miles per litre is not unusual, however, watch that excessive oil use isn’t due to a leak. The oil filter housing is a common culprit, so too the cam cover gaskets. Note that the CVV (crankcase ventilation) assembly is not a pleasant item to replace, it’s an area we have covered in BMW Car in the past. DISA valves – known by some as the nemesis of the M54 engine, can also fail so do your homework on these.

As we’ve said, these cars are getting on a bit and with that come rattles and creaks. The suspension is known for rear spring failures, broken springs are often the cause of worrying noises while rear shock absorber mounts are known to perish, especially making themselves known over rough sections of road. Up front it’s control arms and ball joints – just as is the case on the E46 3 Series with which the Z4 shares much. That can be a good thing as it means parts are plentiful and cheap to replace for the E46 is a well catered for BMW.

Steering lacking in any real feel and confidence can be one symptom, so too vibrations through the wheel rim itself, a ramp-based inspection is the best way to diagnose any trouble here. That said, those controversial run-flats can be to blame for some of this so if the car you are viewing has a set fitted keep this in mind. We’d recommend swapping them out to gain a more focused driving experience from your Z4. Talking of steering, the wheel should move smoothly and lightly from lock-to-lock, any jerky feel could be blamed on a faulty steering column assembly.

As would be our advice with every purchase on a car with an automatic gearbox, ensure the gearbox oil has been changed regularly in line with the recommended BMW servicing schedule. That said, the six-speed manual ‘box is the pick of the bunch so far as many enthusiasts are concerned. For the most part use your common sense when examining any potential purchase.

With regular maintenance and replacing worn parts a given on any car of this age, further running costs should not be exceptionally high. Thanks in part to the E85 Z4’s lighter makeup it is quite efficient for a car of its type, expect it to return around 30mpg during urban driving, higher 30s on motorway runs, while servicing is not really dearer than any other six-cylinder BMW – namely of the E46 era.

The Z4 has aged gracefully and offers affordable roofless motoring and good levels of performance. In the late summer sunshine there are few better options at this price point, and assuming your Z4 is as watertight as it should be (literally), it provides a fun winter steer too thanks to its rear-drive layout and overall practicality. At around £4,000 an early 3.0-litre E85 Z4 is far from a bad prospect in our eyes.