This bargain roadster is a great sports car and a design icon – find a sorted example and in time it may even cover its own running costs. Words Richard Dredge. Photography John Colley.

After the relatively svelte Z3 E36/7, the first-generation Z4 E85 – unveiled in 2002, with UK sales beginning in 2003 – looked radical. Gone was the conventional design and in came ‘flame surfacing’ with a mix of curves and angled shut lines, courtesy of designer Anders Warming, overseen by Chris Bangle. The Z4’s bodyshell was more than twice as stiff as its predecessor’s to reduce scuttle shake, and the handling was aided by a sophisticated multi-link rear suspension system. Now you can buy a Z4 from just £3000. To find out how to snare a good one, we spoke to marque specialist David Smitheram, Adrian Dowd of Sycamore BMW, and Patrick Johnson of TWG.

Corrosion shouldn’t be an issue on any Z4. If there are any signs of rust it’s almost certainly because of poorly repaired crash damage, so do an HPI check and inspect the panel gaps closely; they should be tight and even. The expansive bonnet is made of aluminium and it can get dented by stones. The cheapest fix will be to source and repaint a used bonnet, but if you can buy one in the right colour it could cost as little as £200. 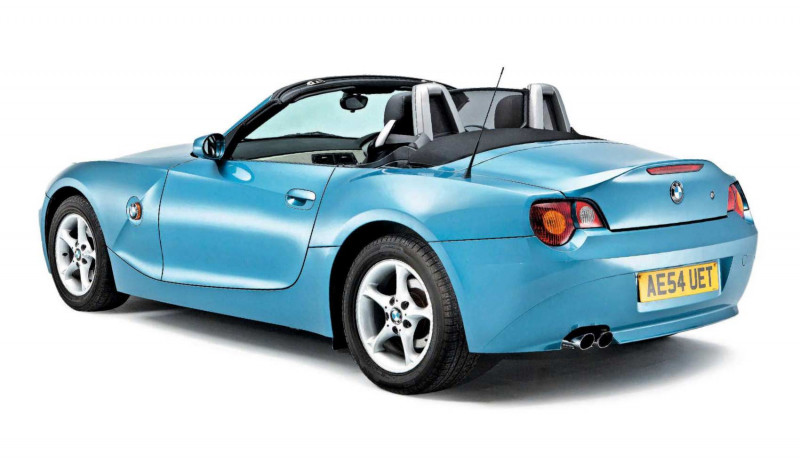 Look for signs of damage to the front and rear bumpers, which are large and get scraped. If a replacement front bumper is needed the bill can easily run to £1000 with painting and fitting. Buy a used one, fit it yourself and it’ll be closer to £200.

On roadsters, check the electric roof to ensure it works properly. The motor sits on the boot floor and gets flooded with water if the boot seals have leaked, or if the previous owner failed to clear the roof drains. The motor housing can be modified or moved behind the seats to alleviate the problem. Budget £600 or more to get the problem fixed at a BMW dealer.

Engine faults are relatively unusual regardless of which model you choose. Any engine that’s not running properly should be plugged into a diagnostic computer which should pinpoint any problems. It’s worth investing in a small handheld scanner or ELMS327 Bluetooth module that plugs into the OBD2 socket in the footwell and links to an app on your phone; the car is clever enough to produce a code and tell you what’s wrong, potentially saving garage costs. If the 2.0, 2.5 Si and 3.0 Si engines get too warm it’s probably because the electric water pump is on its way out. It’s not the end of the world if you have to replace one; expect to pay £250 for a new one, fitted.

Running gear was taken from the E46 3 Series, which means there’s a ready supply of parts and used engines. The variable intake manifold (DISA valve) can fail, given away by a rattle from the manifold once the plastic components have broken up; there will also be a lack of top-end power or low-end torque (or both), depending on the position in which it has failed. These require specialist tools to work on. Budget £110 for a replacement valve, taking it up to £200 all-in for fitting. Camshaft sensors also fail, betrayed by hesitation and the engine being sluggish to start when warm. It’s an easy fix with labour typically running to around £60 per sensor but stick with genuine BMW parts because pattern sensors tend not to be as robust.

The 2.0-litre engines (the only four-cylinder unit fitted to the Z4) are susceptible to stretched timing chains, so listen for a slapping noise as the engine is started; once things are set to get expensive a warning light will illuminate on the dash. Much of the problem is caused by weak plastic tensioner guides. These powerplants can also suffer from a failed head gasket, so be prepared to spend £750 on putting things right.

The 2.2, 2.5 and 3.0-litre engines like oil; officially a litre of lubricant every 1000 miles is fine. If you see visible smoke on start up or when accelerating hard it could be a split crankcase ventilation (CCV) valve or a sticking piston oil control ring. An aftermarket CCV kit is less than £50, although access beneath the inlet manifold is a bit tight; a product such as Seafoam helps free the oil ring. Some owners go a step further by replacing the CCV with an aftermarket pressure control valve (PCV) and catch can, which often helps reduce oil consumption. Otherwise, budget around £325 for a specialist to replace it with a genuine BMW part.

Any car still on its original suspension will need some work by now, not least of all because the rear springs are prone to breaking, given away by knocking as the car is driven; sometimes the car sits low at one corner. Budget £300 for both sides, but when you’re getting the work done it’s worth also replacing the rear damper mounts. Expect wear in the front control arms and ball joints, leading to vague steering, while creaking from the front may be down to the diagonal front strut braces working loose. If the rear suspension wanders about on bumps it’s probably because the bushes in the trailing arms are in need of replacement; budget £200 to put things right.

It’s worth getting a four-wheel alignment check done, especially if anything in the suspension has been replaced. Vagueness is sometimes attributed to the electric power steering fitted to all Z4s (the Z4M got a hydraulic system), but it’s rare.

The electric PAS can suffer from stiffness, the cure for which can be as simple as lubricating the universal joints or adjusting the ring that controls the electric motor/column. The worst-case scenario is a new rack, which costs £2700 if you go for a new one. A used rack is an option but you won’t know how much life is left in it.

Brake problems only crop up on cars that have been driven hard, and even then, the extent of any issues should be just worn discs and pads. M models have E46 M3CSL brakes, with front discs costing £340 for a pair.

Run-flat tyres were fitted to all Z4s apart from the Z4M and Alpina Roadster S. It’s not unusual to find a Z4 that’s been switched to regular tyres, however there’s no space for a spare wheel so you’ll have to settle for a can of sealant and a compressor instead. Many owners reckon this is a compromise worth making.

The Z4 is essentially very well built, but squeaks and rattles aren’t rare. Elimination is best done on a DIY basis, because it’s largely a case of time-consuming trial and error. A marque expert might be able to fix things faster if they’ve come across specific problems before. The headlights could be the weedy halogens or the more effective xenons. Xenon lights can be identified by their lack of cockpit height adjustment wheel.

Neither is prone to problems but if the latter is fitted make sure they function properly, including the self-levelling system – if this doesn’t work an MoT failure is guaranteed. Replacement xenon headlights cost around £600 so you don’t want to have to replace one.

If items such as the electric windows, wipers or central locking are playing up it’s probably a failure of the GM5 module which sits behind the glovebox. It’s cheap enough to fix – just two relays in the module have to be replaced – but check the main battery first because a tired one can produce the same symptoms. Incidentally, not allowing the battery to go flat is a good idea. If it has gone flat and the car has been left in transport mode from new (the ECU should have been updated so this mode is deleted rather than disabled), the car might refuse to run properly.

Engines are generally robust and parts are a doddle to find, thanks to being shared with the 3 Series. They do guzzle oil, however. Interiors are high-quality, although at this age some irritating squeaks or rattles might need hunting down Now the once-controversial looks have been tamed by time and familiarity, the accomplished Z4 is set to become a popular modern-classic roadster.

With strong, proven mechanicals in a relatively compact body, the Z4 offers fun and reliability at a modest price point.

Will Wong bought his post-facelift Z4 2.5i Roadster E85 to replace a Peugeot 406 Coupé two years ago. ‘The manual gearbox was crucial, plus there’s more room in the boot than there is in an MX-5,’ he says. ‘But the main appeal is that combination of putting the roof down and playing nice tunes with the straight-six. The chassis was designed for six-cylinder engines so it doesn’t feel nose-heavy, and although the four cylinder actually doesn’t give much performance away to the 2.5, it just doesn’t sound the same.

‘I looked at several before buying this one, but their interiors and engine bays weren’t the best-kept. A lot are being questionably modified now, and it’s usual to find scratched centre consoles and grubby leather, but I wanted something to cherish. Thankfully, this one had been garaged all its life.

‘Look at the motor in the boot operating the hood. It’s often relocated behind the seats to get it away from water ingress and is often a sign that the boot has leaked in the past. Mechanically I’ve had no problems at all, but the radio receiver is weak, a problem traced to an electronic control module that’d cost £350 to replace. There’s no getting away from the fact that parts are expensive, but servicing is reasonable from a good indy like TWG in Peterborough.’

‘I bought this Z4 after a friend with a Z3 took me on a trip to the Morgan factory,’ says John Parry of his 2.8. ‘I’d seen what Morgan was doing with BMW running gear and wanted a convertible, but preferred the modern looks and technology of the Z4.

‘I actually bought the first one I saw, although I only came back to it after looking at a couple of other examples, which had bodywork damage and tatty interiors. I was initially put off by its high price and SMG gearbox, but the owner brought the price down.

‘It’s been reliable, although a pump had been replaced on the gearbox before I bought it. The only thing I’ve had to replace was a noisy tensioner in the engine bay, for £250. The next problem to deal with is a binding rear brake.

‘That said, my other car is a V10 BMW M6 E63, so it’s very cheap to run by comparison! I’d check the hood module in the boot though, because unlike a Z3 there’s no manual way to raise and lower the roof if it fails. They do feel harsh and tinny for a BMW on the road too, a result of a combination of runflat tyres and no sound-deadening in the doors.’

Carole Nash says, ‘Starting from £2k the smaller-engine E85 versions now seem a good proposition if you’re looking for an affordable, wind-in-the-hair entry into modern classic ownership. From £7k will get you a 3.0-litre E86 coupe. With only a two year production run these should prove sound investments. From £13k should get you in Z4M territory with 338bhp on tap. Wanting even more exclusivity? Then opt for Alpina’s take on the E85, the Roadster S – only 167 made it to the UK in rhd. I can’t see values going anywhere but skywards but as with any complicated modern classic, do take into consideration those maintenance bills.’ Classic car insurance quotes: 0333 005 7541 or carolenash.com