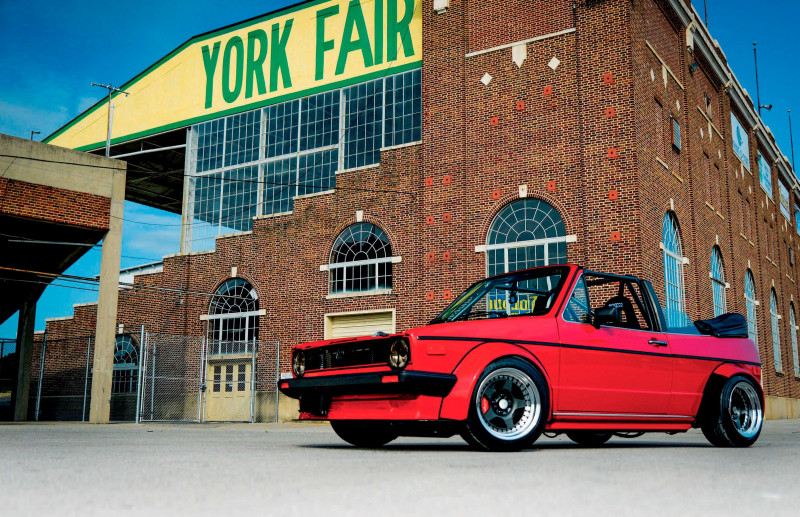 The year is 1988, the movie License to Drive (what a film — Ed) is in the theatres, and the star of the show for us VW heads was not the two Coreys, but a white Mk1 Cabriolet. Here today, though, is a prime example of an ’88 Cabriolet, but not like the star of that movie… or any others you’ve have seen for that matter. This is a prime example of a wolf in sheep’s clothing, who ate Little Red and stole her cloak (see what you did there — All). Please say hello to Brandon Quail. He’s a 35-year-old Automotive Engineer with a love of cars, well powerful cars. Brandon has had 19 cars and thankfully only 4 of those were non VAG cars! The rest are a sprinkling of Wolfsburg’s and Ingolstadt’s finest from VW and Audi. The start of Brandon’s VW timeline was a ’92 Golf more door in Calypso Green. The car was bought out of necessity, sight unseen, and didn’t even know what it was before completing the sale. The car was a hack job and “broke every Friday”, but he loved it! He was very proud, as this was the first car he’d purchased on his own at the age of 18. Brandon’s list continues on with this being his most recent purchase in the summer of 2018. 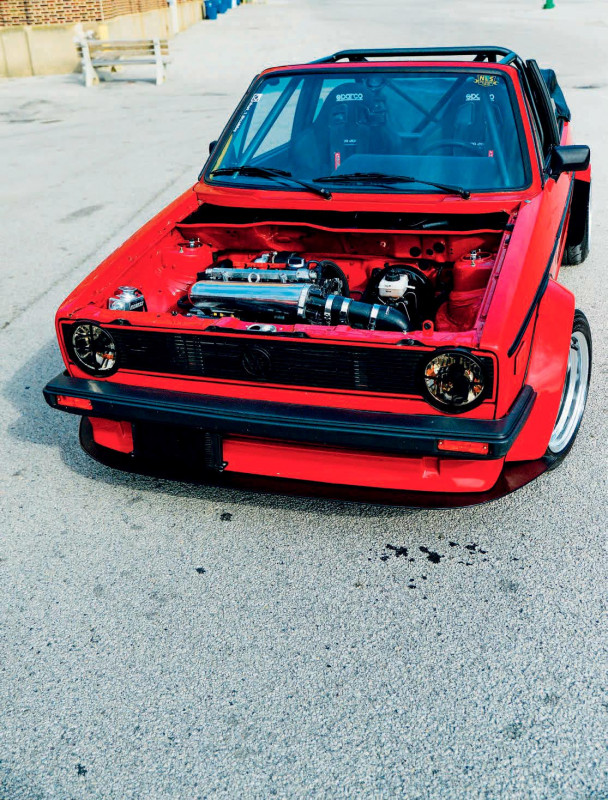 One night his wife said that she “wouldn’t mind one”, when asked about a Cabriolet, so the search began and it was found on Facebook’s marketplace. With Brandon not thinking a Cabriolet was that much of a man’s car and since it was allegedly (lol) to be a birthday gift to his wife, the purchase was made. The car was a cream puff, running, driving, 2.0 ABA swap car, with its normal wear and tear missing parts and dings. It was Tornado Red and still is. It ran, but let’s just say that the car wasn’t happy. Only a few minutes after leaving the sellers house, it first broke down. The roadside mechanic kicked into gear and an alternator was sourced and replaced and they were on their way, strike one. Strike two came the very next week. On their way to its first VW show, Cult Classic, the crank sensor decided to kick the bucket. 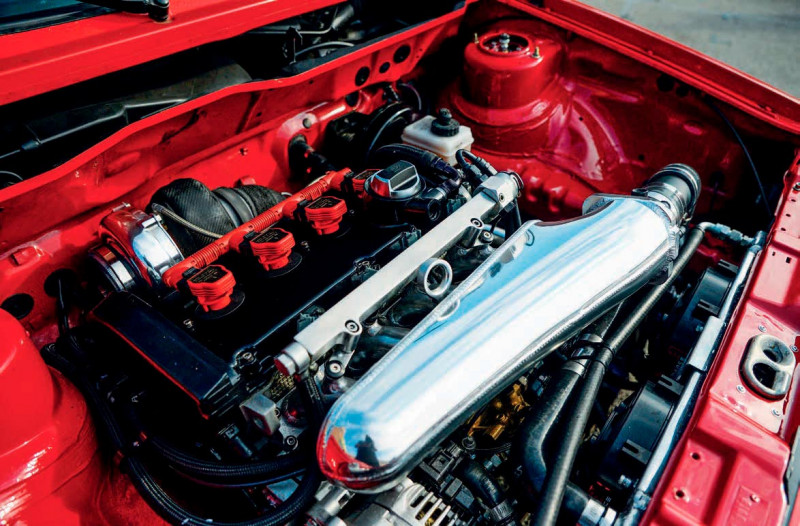 Brandon states that this was the last straw and the tired 8v had to come out. After doing the needed research and acquiring all that was needed the swap was made, from a lowly 97hp 8v to a healthy 1.8T capable of 400-500 HP. Being no stranger to high horsepower cars from his G60 Swapped Calloway Turbo’d Mk1 Jetta GLI to his 2017 Dodge Challenger 392 Scat Pack, he knew that the 1.8T was a good motor capable of reliable horsepower. As with any build, this was only supposed to be a simple swap, Brandon. “A 1.8T, K04 hybrid turbo, nothing crazy.” We all know it just doesn’t stop there. He wanted more power every time he drove it. So it started, Phase 2. Brandon took his inspiration from 2 cars. 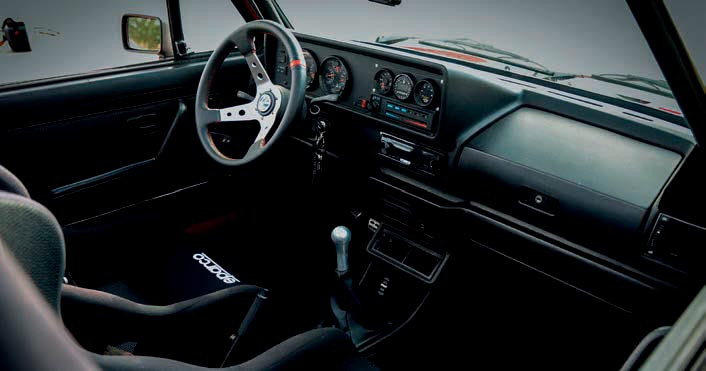 The Peach Mk1 20v built by Unix Performance and the Berg Cup Cabby named “Blackjack” by Tommo Houseago. The awesome Berg Cup Fender kit was sourced and installed. As this added so much more width new wheels were an absolute necessity. These came in the form of Work CR01 3-piece in 15” by 8.5/10” front and rear respectively. He’d seen them on a Nissan Skyline and fell victim to COVID, waiting 7 months for them to be delivered. To perfectly place the wheels in the new fenders the suspension went from Airlift 3P air-ride to BC Racing Extreme Low coilovers with Swift springs to compensate for the added weight from the 1.8T and a more track inspired performance. Every part of this car is the work of Brandon. Weekend warrior style with all the mechanical work, the fender installations, the paint. All the way to what he states was the hardest part, welding and installing the custom roll cage. Yeah a jack of all trades master of all… and that was the first cage he’d done! The cage, seats and gauges are part of what Brandon calls, “Phase 3”, with more to come. The flares and the cage are the favorite parts he’s done on the car, but he battles himself over which takes the top spot. 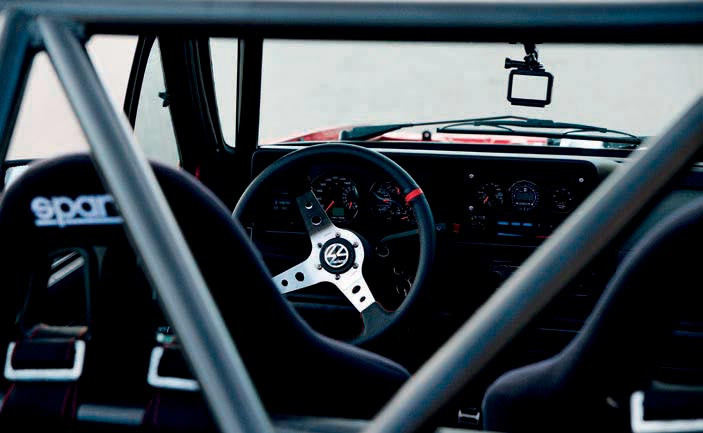 All this and guess what, this is definitely a driver car. Some would think this car moves around in a bubble wrap box! NOPE! This car has never been on a trailer. It gets driven everywhere it goes, even took the 8 hour and 500 mile trip to Montreal for Eurocracy in Montreal. That’s 16 hours and 1000 miles round trip, plus driving in Canada! He is completely confident in the car and loves driving it. He proclaims that he will never stop. Brandon has commented that a full respray may be in the works and it will not be T-Red! In the interim, after the car was photographed for us, he’s wrapped the car in full LiquiMoly livery, BY HIMSELF. Full on race car look, with sponsor stickers and all! This is the complete package. When we asked the obligatory would you do it again, he responded with a resounding, “Absolutely! I would build this car again in a heartbeat. I’ve met some of my closest friends, thanks to this car. Most of them spread out across the USA!” That’s the absolute beauty of the VW/Audi community. Brandon dreams of the next project being a Mk1 “Tin Top” GTI with (yes you guessed it…) a Berg Cup kit to match the Cabby, but with a Mk7 2.0T DSG swap. With his love of the Berg Cup kit, is one of the pioneers of the hashtag #bergcupcabby! 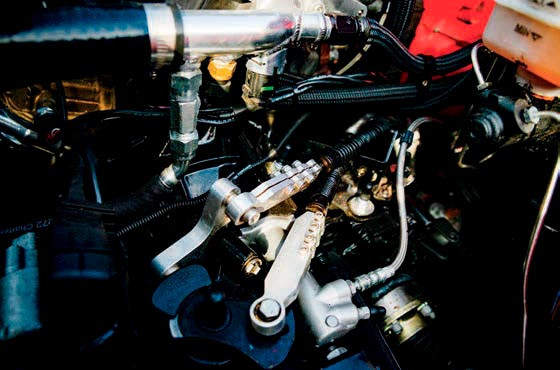 Brandon boasts that he will never stop with this car. “Its my passion and a form of art for me. Its how I express myself creatively and continue to learn new things!” Now that’s love! Love for the car and the hobby! It is a work in continual progress. He keeps on modifying, building and creating new iterations of it and even though it was allegedly a birthday gift to his wife, she still hasn’t driven it! Keep on keepin’ on Brandon! Can’t stop, won’t stop.

«I would build this car again in a heartbeat. I’ve met some of my closest friends, thanks to this car. Most of them spread out across the USA»