A certain degree of mystique surrounds this version of 250SL

Why did Mr Speek purchase a right-hand drive Mercedes-Benz 250SL W113 without the rain-beating convenience of a folding soft top? The year 1968, when this Signal Red beauty was registered in the UK, wasn’t exactly exceptional in terms of rainfall, although it was drier than the previous three years. Could this situation have influenced Mr Speek’s belief that he could get away with a hardtop and nothing else? 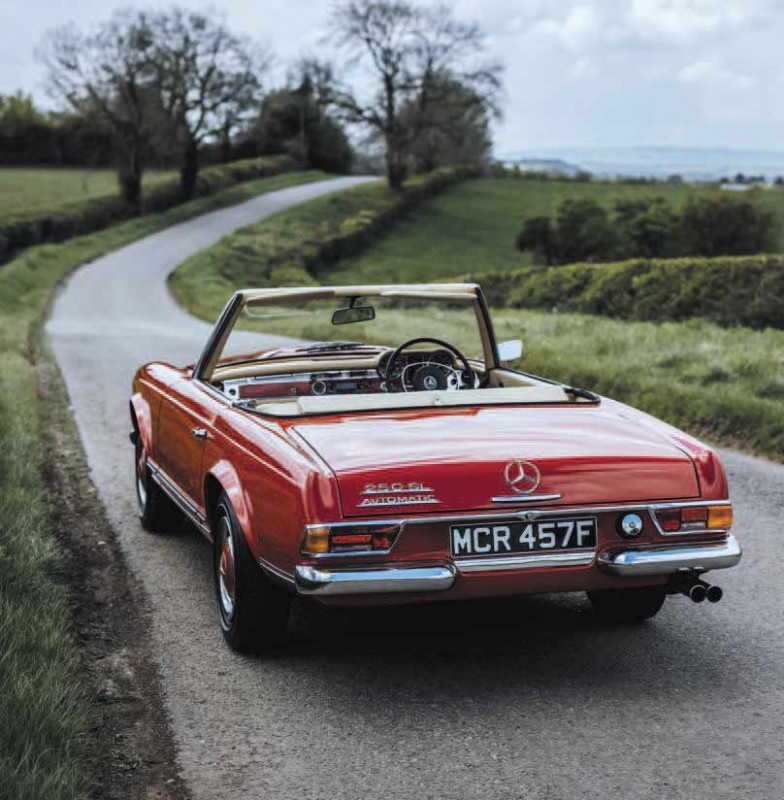 Perhaps. Although the 250SL was replaced by the 280SL in January 1968 (the same month this example was registered), so it’s more likely Mr Speek was offered a good deal on this unusual and soon-to-be-usurped Pagoda. After all, it didn’t have the usual fabric hood, relying instead on a removable hardtop to protect its occupants from the elements. I don’t think it’s unfair to say, relative to standard issue SLs, that this model’s appeal was somewhat more… specific.

Working in this 250SL’s favour, however – aside from the vibrant paintwork and matching hub caps – was its increased seating capacity: a bench seat is located where the fabric roof would have been stowed. Legroom is inescapably ‘limited’ in this area, although the backrest doubles as a large and rather handy parcel shelf if you pop it face down, making this the perfect place for additional luggage. An alternative ‘+1’ rear seat was also available for the Pagoda: a side-facing single pew tucked behind the driver of a right-hand drive car that offered a smidgeon more legroom than the ‘+2’ arrangement.

Right from the beginning of its production to the present day, the W113 SL has upheld a reputation for being utterly dependable on a run, unflinching in the face of a 200-mile trip to the countryside, or a high-spirited blast down a motorway. Its victory in the 5,000km Spa-Sofia-Liège Rally of 1963 with Eugen Böhringer at the wheel and Klaus Kaiser giving directions confirmed its exceptional build quality and its ability to carry people without shaking them into bleary-eyed submission. A certain degree of mystique surrounds this version of 250SL, a fine example of which we’ve commandeered from The SL Shop in Stratford upon- Avon. To many, it is known as the ‘California Coupe’ due to its apparent suitability to the warmer climes of The Golden State, along with the fact most were sold new in that part of the world (see the separate box on page). 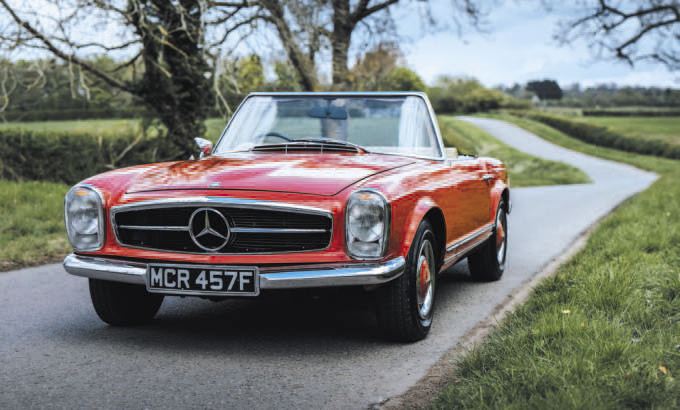 She’s got the legs

As far as Pagodas are concerned, this right-hooker is particularly rare. Of the 48,912 113-series SLs built between 1963 and 1971, just 5,196 carried a 250SL badge. “Only 3,435 of these were destined for Europe,” explains SL Shop’s Bruce Greetham. “If it was possible to split that number down further into 250SLs delivered to the UK, and then distil the number again to ascertain how many right-hand drive 250SL California cars were sold in England, the number would be the lowest of all Pagoda deliveries.” If that doesn’t whet your appetite, I’m not sure what will…

At this point it’s worth noting that Mercedes-Benz also offered the 280SL in ‘California’ specification, although once again the exact number made is undocumented. Amazingly, the first owner covered over 50,000 miles in this 250SL in the first three years, with 13 services carried out at John Shrigley & Co in Poynton, Cheshire in that time alone. The mileage now stands at a not unreasonable 95,000 and the service history record is complete, detailing over £17,000 worth of work lavished on this pretty coupe-roadster in the recent past. 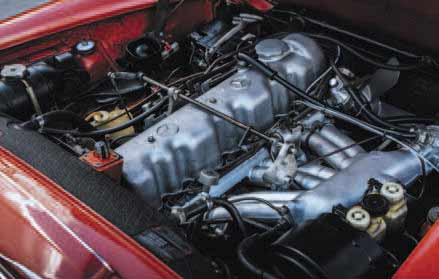 In its present form, this 250SL is not entirely standard, having received the larger 2.8-litre six-cylinder engine from the 280SL between 1988 and 2001, and bringing with it an extra 20bhp plus 18lb ft torque. The reason for this change is unknown, but the M130 motor is perfectly suited to the four-speed automatic transmission and I suspect its range-topping performance is one of the main reasons the 280SL is the most popular of all Pagodas anyway.

This 250SL 2+2, with its lovely beige leather and chrome detailing, is certainly an intriguing proposition and as Bruce confirms, “it is a very good way to get into a Pagoda for a considerable amount of money less than a regular roadster,” adding that the car appeals to “a very select market in which buyers understand what it is.”

Clearly, demand remains for this type of Pagoda in the UK as, just before our photoshoot, the car found a new owner who very kindly allowed us to proceed before whisking it away on a whole new adventure.

All figures from Mercedes-Benz for a standard 250SL – car featured is fitted with a 2.8-litre engine; fuel consumption determined at 3/4 of top speed (not more than 110km/h, 68mph) plus 10 per cent

6 cylinder 2.8-litre from a succeeding 280. Likely that many kept the hardtop in place.

Clearly, demand remains for this type of Pagoda in the UK. Derek shed some light on these rare SLs. Sundridge Park Motors as it looked in the 60s. 250SL with auto and PAS priced at £4,178… Pop forward the driver’s seat to access the rear. M-B made just 5,196 examples of the W113 250SL. First owner covered many miles sat here. Colour-coded dash with beige leather trim. Two manuals and one autobox were available.

I sold one new

A friend of Mercedes Enthusiast magazine, Derek Singleton worked for Mercedes-Benz dealerships from 1965 to 2016, securing homes for countless three-pointed stars over the years including one special 250SL in Moss Green over black MB-Tex with an optional seat configuration

The year is 1967. It’s a summer’s evening and Derek Singleton is locking up the premises of Sundridge Park Motors Ltd in Bromley, Kent when he is approached by a man and his daughter. “The gentleman had seen the 250SL parked in our showroom, not far from my desk,” Derek recalls. “In those days, we referred to this model as a ‘250SL 2+2’ [or 2+1], as it had the additional rear bench seat. We talked about the car – the gentleman didn’t need a demonstration of it – and about an hour later we agreed a deal, with delivery scheduled for a week later.

“The gentleman was called Mr Lockley-Cook and he lived about five miles from the dealership. He owned a chicken farm situated between Bromley and Biggin Hill. I had to explain to him that once you’ve removed the SL’s hardtop and go for a drive, that’s it – the English weather could catch you out.” Although, as Derek explains, many owners of these cars never removed the top, and it was the additional seat that made them sign on the dotted line. “For all I know, Mr Lockley-Cook may have had a small grandchild and the SL’s extra seating meant they could all travel together. “The 113-series SL enjoyed a great deal of success in the UK,” Derek continues.

“We imagined that the factory produced this particular type of 250 specifically for worldwide markets that had a dry climate. I do not recall ever using the term ‘California Coupe’ to describe this model back then, however I recently spoke to a colleague who worked for Mercedes-Benz dealer Normand Mayfair Ltd on Park Lane in London and he told me something interesting. He clearly remembered a day in 1967 when he was in the workshop and another member of staff turned up in a new 250SL. This person explained to my colleague – who’d never seen one with the small rear bench seat before – that the model was called a ‘California’ because most of production was going to the United States.”

So, what was it like rubbing shoulders with the Pagoda in its heyday? Did Derek have any sense that it was a bit special? “Oh yes. It was a very distinctive and pretty car. Visually, I would say it appealed even more to women than men. It was never seen as a macho muscle car, obviously. Women in particular loved the look of it and were very good customers for it, if not new then certainly second hand. In those days at Sundridge Park Motors, I was like a kid in a toyshop. The majority of new cars that we sold were stock in the showroom. Perhaps every one in five we waited a few months for it to come through from the factory. Mercedes-Benz had things very well organised, as you can imagine.”