A whole new audience of BMW enthusiasts are turning to the modern classic charmsof the E36. Zach Perez and his reworked 328i Sport make it easy to see why.

Not so many years ago picking up a 3 Series project was a piece of cake. The E30 was the default option for almost everyone in search of a useable, fun, BMW. Parts were readily available, values were low enough to mean that these were cars you didn’t need to cosset. In short, supply was plentiful and prices affordable, however, times have changed. As the E30 3 Series crossed firmly into classic car territory, costs accelerated in unison with their age. As a result, in recent times, enthusiasts on a budget have been forced to look elsewhere for their BMW kicks, and for many that has meant turning to the E30’s modern classic relation – the E36. 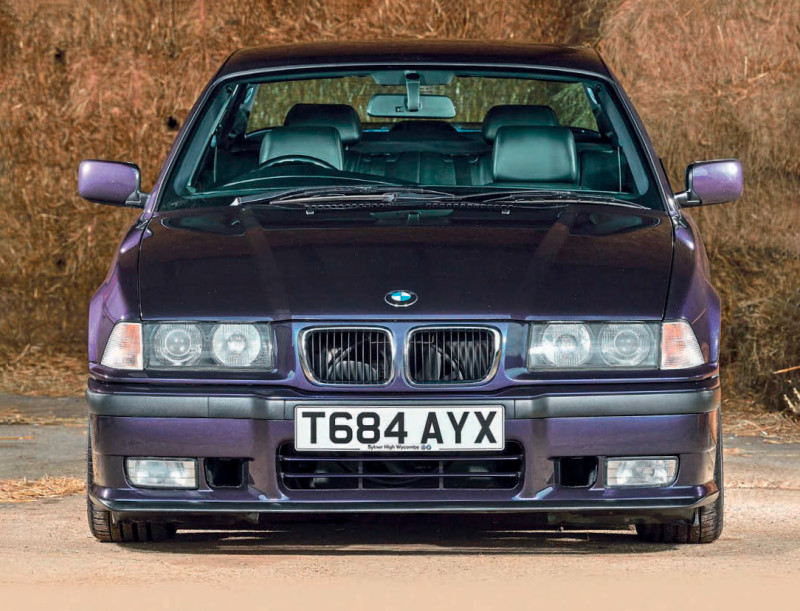 Now, for those of a certain vintage, it’s pretty easy to forget that the earliest E36 is now more than 30-years old, the newest is over 20. It means the E36 really is getting on in years, it is no longer the daily driver – or daily drifter – that it once was, instead it is growing in popularity with genuine enthusiasts who want to keep these cars for ‘best’. Exemplifying that breed is 27-year old Zach Perez, owner of the striking E36 328i you see here.

“My history with cars goes back as long as I can remember. I blame my dad as he is also a petrolhead – he’s into cars and motorbikes,” Zach smiled. “Before driving it was toy cars – Hot Wheels and Lego, then it turned to bicycles – I have always taken When the time came to start dabbling with real cars, Zach was drawn to the water- cooled Volkswagen scene. His first motor was a VW Polo coupé which he acquired at the tender age of just 16.

“Me and my dad carried out the work on it together,” Zach explained. “I learned from him, taught myself things, and I was also at college studying car mechanics. I’ve had plenty of old Volkswagens – including a Mk1 Scirocco and Mk2 Jetta. I got into BMWs when my uncle gave me his high-mileage Z3 2.2 Sport as a birthday present, he had owned the car from new.”

We could all use family members who give away free cars, I’m sure you’ll agree. For Zach, the gift of the Z3 was the start of something: “It was my first rear-wheel-drive car and I was instantly hooked on BMWs,” we’re told. “After that I owned a few; an E46 330Cd, E91 335i Touring, F10 530d and a 635CSi E24 – sadly I had to sell that one due to a loss of storage.” The Essex-based Fire Safety Inspecting Officer was on the hunt for his next project. That it would be a BMW largely went without saying, the rest was less of a forgone conclusion.

“I was actually looking for an early ‘chromie’ E30, but then I was randomly searching Auto Trader and I saw the E36, it was built in December 1998 so it’s probably one of the last,” Zach recalled. “The car was located in Potters Bar so it wasn’t too far from me. The main thing that attracted me to it was the Techno Violet colour, the interior was really good too, although the car was automatic I saw this as a plus as it wouldn’t have been thrashed.”

Zach contacted the owner to arrange a viewing, and, as the old saying goes, the rest was history. Though he was chuffed with his new purchase there was work to do, as Zach recalled: “The car was in really good condition when I bought it, but the paintwork needed a good detail and correction, unfortunately the lacquer on the boot lid was completely cracked. There was also a cracked headlight and foglight to contend with, but mechanically it was sound – everything worked, and there was also a lot of history with the car which was a real bonus.”

Zach made the decision to take the BMW off the road for some remedial works, as these things have a habit of becoming, that swiftly turned into a major overhaul.

“I wanted to swap the car to a manual transmission,” Zach said. “I watched a YouTube channel called ‘M3NACE’ – the guy is a hero. Through that I had all the guidance and steps noted for the conversion, I went up and down the country collecting parts like the pedalbox, propshaft and gearbox itself. I then used the website RealOEM (realoem.com) to get all the genuine parts I needed for the conversion.” Zach was fully committed to the undertaking, using a mixture of BMW original parts and aftermarket upgrades.

“Where required I installed upgraded parts from the likes of Hack Engineering. It was a learning curve but all was successful,” Zach explained. “To increase driving pleasure I got a LSD built – 3.15 medium case 8 plate. Once this was completed I then refurbished all the suspension and steering. All parts were powder coated, the bolts zinc plated, any new chassis parts were upgraded where possible – the likes of the BC coilovers being a case in point.” Zach gave the engine a full service too, he added M3 exhaust headers and also carried out an M50 manifold swap, for good measure the ECU was remapped to get most from those tasty upgrades.

“The interior was mint so all I did was re- trim the headlining, and I fitted an M-Tech II steering wheel and genuine illuminated gear knob,” Zach said. “Exterior wise I was fortunate enough to win a detailing competition with Auto Finesse. Owner, James, and his team carried out a full top-to-bottom detail on the car. This ranged from paint correction to interior and engine deep cleaning, they even painted my boot lid, fitted a new windscreen and a full scorpion exhaust system. And they threw in a huge cleaning kit. It was such an amazing gesture, I was over the moon!” To finish off the amazing work of Auto Finesse, Zach purchased new genuine BMW window rubbers and badges. And, following a year and a half off the road, the car was ready finally for an MoT – it was a fantastic achievement all round.

Clearly part of the appeal of this car for Zach is that he’s been able to complete such a huge chunk of the work himself. Outside of routine maintenance, which is a walk in the park for a man of his talents, Zach has conducted that manual conversion, rebuilt and refurbished all of the front and rear suspension steering assemblies. For some of the other jobs he turned to businesses either in his locality of Colchester, or his original home county of Suffolk – making this car’s build something of a best of British affair. The VANOS seals were replaced by Angus Buchanan Workshops in Essex, the LSD was built by West Suffolk Racing in Chedburgh, a friend at the local Tyre Smart took care of the tracking. Lastly, BMW Colchester and Bury St Edmunds assisted with those genuine parts. All told Zach has found all aspects of the BMW scene welcoming.

“The ownership experience has been brilliant so far. There are a lot of genuine people out there who are willing to help and advise on any queries,” he said. “It’s nice to see more of the older BMWs being restored to high standards, I think the BMW scene is going more original or OEM plus as it’s only getting harder now to find a car in its original condition. I always get a nice reaction with how clean and original my car is – most E36s have been drifted or chopped about.”

There’s plenty to like about this car, and Zach has clearly fallen in love with its charms, especially in this reworked guise.

“My favourite aspect of the car remains the Techno paintwork – it really pops in the sun,” he smiled. “I also love 1990s box shaped cars like this, it reminds me of British Touring Car Championship – the John Cleland versus Steve Soper era. I love the simplicity of the car – it isn’t fully loaded, it is built for pure driving and going on a B-road blast. The handling and the sound of the straight-six are hard to beat too, especially in a tunnel!”

Zach’s original plan was to find an E30 project, so, what does he make of the E36 – has it transpired to be a worthy alternative? “I think the E36 is a worthy classic. I know the E30 and E46 often steal the limelight, but the E36 is starting to be recognised as a contender for the best 3 Series,” Zach enthused. “I also consider the 328i a great purchase. Good examples are getting thin on the ground, in my opinion it is becoming harder to find a good 328 over an M3. Most people still think a 328 is worth £1,000 – they aren’t, and people are quick to criticise that. Another advantage to the 328i is that when you’re changing parts you haven’t got the ‘M tax’ – that makes these models reasonable for newcomers to the BMW scene.

“E30 values are sky high now and these cars are going the same direction. A well- known E36 seller, Farooq Kahn, who builds and restores rare E36s to a high standard, gets a lot of stick for prices when he advertises his cars. But these cars are in demand, they sell fast despite prices being on the higher side – as the saying goes, you get what you pay for – these are enthusiast target market cars now.” Zach has owned his E36 for just over two years, as a serial BMW buyer, might the time to move on be fast approaching?

“I am always considering selling and changing things, I often browse eBay and that’s a dangerous hobby!” Zach laughed. “I wouldn’t mind another classic BMW, like a E34, or I might look into buying a E46 M3 – I am yet to own an M car. The newest BMW I have owned is my F10, on a 63 plate, I absolutely loved it, it was one of the best cars I have ever driven with a build quality second to none. However, you just can’t beat an older BMW – three pedals in the footwell and a naturally-aspirated straight-six. It just doesn’t get any better...”

“You can’t beat an older BMW – three pedals in the footwell and a naturally-aspirated straight-six. It doesn’t get any better”