On the road in the ex-Peter Collins, prototype 1953 Aston Martin DB2/4 FHC

The intake hones to a crisp, honeyed burr, surging the one-and-only 1953 Aston Martin DB2/4 MkI Fixed-Head Coupé forwards as the exhaust ricochets against the tree line. I ride the muscular torque delivery until the centre-mounted tacho swings towards 4500rpm, then click up to third gear and keep the acceleration coming. Sitting low but swaddled in leather, wedged against a high transmission tunnel yet luxuriating in the Aston’s soft, assured ride quality, I feel the Feltham-built four-seater dance between its dual existence as sports car and stately conveyance.

If a grand tourer is a car that can do it all, they come no grander than chassis LML/515. At turns a mechanical and a bodywork testbed – the latter role earning it a short career in promotional photography – the trailbalzing notchback was first commissioned and owned by Aston Martin boss David Brown, who used it as a personal car for almost two years. Peter Collins was next to pick up the keys. The British Formula 1 ace bought the DB2/4 months before departing the works racing team, keeping the car when he switched allegiance to Scuderia Ferrari. Il Commendatore Enzo is said to have been displeased, allegedly banning the car from appearing at race meetings.

‘King Hussein of Jordan immediately sent the DB2/4 for restoration, entrusting it to Bristol Cars’

Still Collins retained the car, the odometer rolling past 36,000 miles before his tragic death in the summer of 1958. Cracking the stiff yet accurate throttle wide, I can see why the prodigal hotshoe spent so much time behind the wheel. Smoothspinning with a sharp-edged soundtrack, the inline-six offers eager muscularity that outstrips the average early DB2/4. And with good reason. While customers had to settle for the familiar 2.6-litre VB6E, as introduced in the earlier DB2 and since uplifted to standard 125bhp Vantage specification, Brown fitted his own car with the latest 2922cc development of WO Bentley’s dual overhead camshaft design.

‘Smooth-spinning yet sharp-edged, the straight-six outstrips the average early DB2/4’

The capacity upswing had racetrack precedence. After the underpowered Vantage engine turned the 1951 DB3 sports prototype into a relative dud, Aston Martin had returned to the drawing board, overboring the previous design to create the 2.9-litre DP/101. Raising peak power to 163bhp, the engine powered a DB3-mounted Collins to victory at the 1952 Goodwood Nine Hours, spurring the marque to plan roadgoing applications. At the apex of the ensuing research and development programme, LML/515 rolled off the line complete with the new 140bhp VB6J engine. 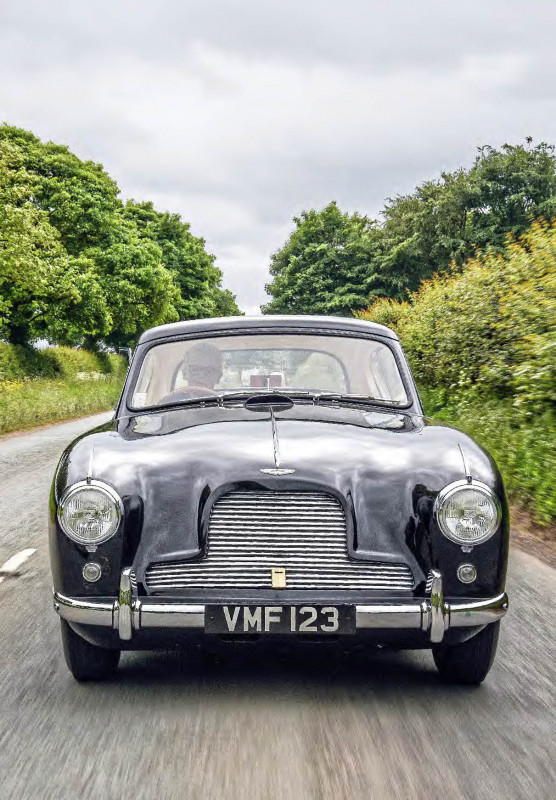 Navigating staccato Cheshire traffic, car and engine seem perfectly matched. After racking up thousands of miles with LML/515, David Brown must have felt the same. The Aston oozes flexibility through all four gears, seamlessly floating through snarl-ups before clearing its throat and charging hard at the first hint of an open road. With 155lb ft available from 1000rpm and a 178lb ft torque peak – up from the 144lb ft of the Vantage – the 3.0-litre pulls seamlessly at any revs. Over the course of 1954 the VB6J became factory fitment across the DB2/4 range, while the dual-exit exhaust and Weber 40 DCO carburettors his car had been trialling since August 1953 would become performance-enhancing cost options.

‘Steering weight rises to formidable levels, vastly exceeding the heft of a Bristol or AC Aceca’

Not that the Aston supremo considered his development work done; he liked to continuously refine. After enjoying his 3.0-litre prototype as a Drophead Coupé for several months, Brown contacted Mulliners of Birmingham with plans for a replacement body style. He briefed the coachbuilder to take the storied 1953 machine and mount a fixed metal roof in the same shape as the outgoing convertible soft top, which the firm interpreted in a close-cropped notchback design. Adding rightangled tension where the ordinary DB2/4 saloon exhibits a single convex curve from roofline to rear bumper, the sharp and sporting Fixed-Head Coupé was dressed to impress. 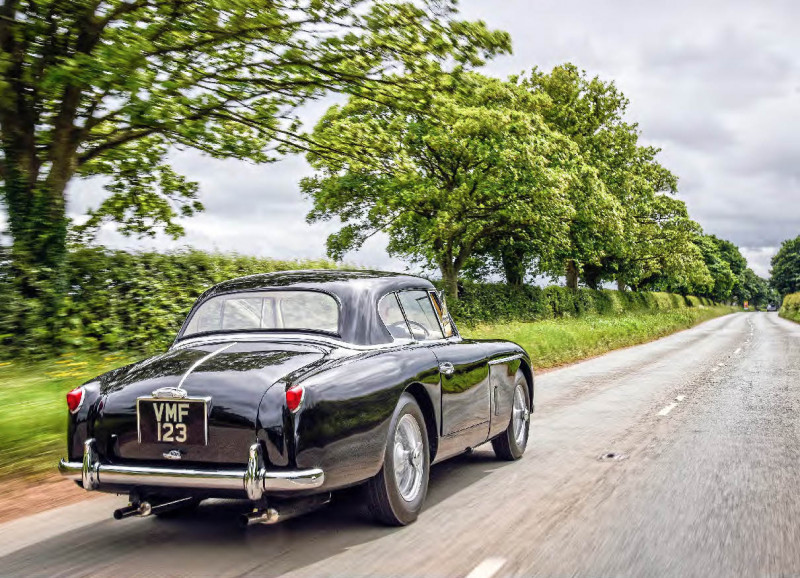 Finished in a light, bright hue – to create marked contrast with maroon bodywork and a green leather interior – the new roof would get its chance to shine in 1955. Suitably impressed by the reclothed LML/515, Aston Martin added the Fixed-Head Coupé to the revised DB2/4 MkII range it was set to launch at October’s London Motor Show, and selected the prototypical MkI for accompanying promotional photography. It wasn’t a difficult decision – no other fixed-head cars had yet been constructed. As the show raged at Earls Court, the 1953 machine fronted a print advertising campaign for the MkII. Fitted with the wheelarch-height chrome bonnet shutlines that would distinguish the revised model from its predecessor, LML/515 was all-but a dead ringer for the productionised MkII Fixed-Head Coupés it would inspire. Only the most eagle-eyed 21 October 1955 readers of The Autocar would spot the vestigial tonneau-securing studs that still lined the side window frames, hinting at the car’s soft-top history. 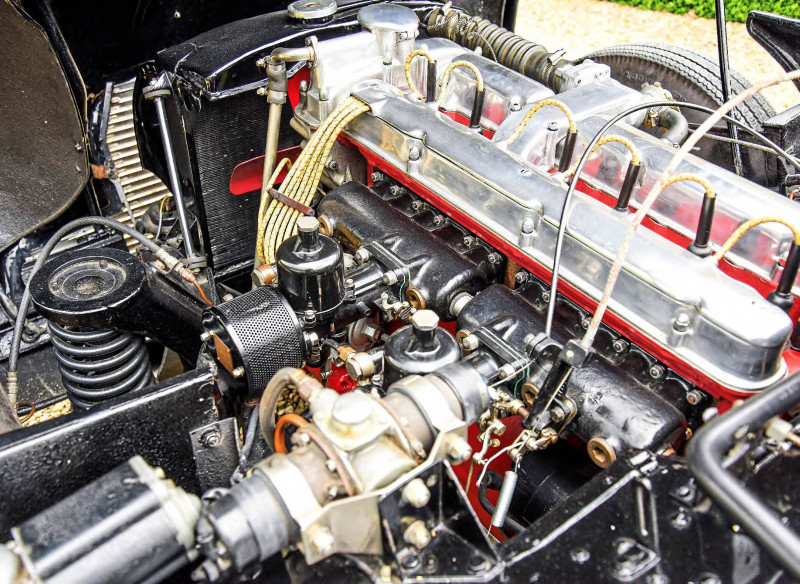 The new shape met a modest but positive response. Priced to match the £2905 saloon, representing a minor saving over the £3117 Drophead Coupé, Aston Martin’s first and only notchback design found 34 buyers before production ceased in 1957. Built not at Mulliners of Birmingham but by rival coachbuilder Tickford – a recent David Brown acquisition that would soon host the relocated Aston Martin factory – the MkII bodies exhibited only minor deviations from the original, incorporating subtle chrome revisions and Tickford badging.

By the time the photos hit news stands, second owner Collins was already three months into his custodianship. After repairing minor accident damage and switching registration numbers from the original 5341 H to 9 FMP, his private plate, the racing driver entered 1956 with an eye on engine improvements. Aston Martin undertook the upgrade programme, fitting new exhaust boxes, modified restrictors and a cylinder head to ‘L-type’ Special Series specification. Containing larger valves and highlift camshafts, the hot head was an optional extra introduced for the MkII that raised peak power to 165bhp. With its Webers and exhaust setup, LML/515 could have been faster still. By June 1958 the tuned motor had cried enough. Engine number VB6J/50/28 was removed from the car and dismantled, so the expired cylinder block could be discarded but the uprated cylinder head retained. Grafted to a brand new engine – numbered VB6J/286/L – the Special Series package survived to ensure LML/515 retained its high-performance edge. Barrelling towards a long, tightening corner, I’m starting to wish Aston Martin had upgraded the brakes and handling to match.

Squeezing the middle pedal provides a disconcerting first impression, the light and mushy action creating underfoot uncertainty that matches the absence of any meaningful retardation from the all-round Girling drum brakes. On top of the bend and short on other options, I nudge the steering wheel and trip into a substantial dead zone that forces me to hunt further, before revealing vague and wooden responses that force me to take multiple bites at each corner. The front trailing arms sway the car horizontally in response to my bitty inputs, compounding the challenges of a live rear axle that pivots the car aggressively when cornering on a neutral throttle.

Time to rethink. Collins never needed to alter any aspect of his Aston’s running gear, so perhaps the secret lies in maintaining a silky smooth yet positive driving style. A slithering series of S-bends approach and I try again, making firm, decisive movements and sticking by the courage of my convictions. The DB2/4 transforms. Pushing gradually deeper into the brakes, slicing through their early indecision, I discover a firm pedal that summons robust, reliable stopping to match a Lancia Aurelia B20, freeing up enough mental bandwidth that I can click the Bakelite-topped gearshifter through its oily weight and closely defined gate to summon additional engine braking.

Arcing the Aston’s wood-rimmed three-spoke wheel progressively but firmly towards the maximum lock the turn requires, the Adamant worm and roller steadily removes its veil, shedding its initial fuzziness in layers to reveal vivid, wristtugging feedback that takes both hands to control as the body leans decisively into the turn. Steering weight rises rapidly to formidable levels, vastly exceeding the heft of a contemporary Bristol or AC Aceca, so I breathe into the accelerator to start gradually shifting load into the hopping rear suspension. The pattering messages through my seat recede as the car neutralises itself, the cabin squatting gently over the back axle and the steering shedding shades of its still substantial heft. Opening the throttle further, the DB2/4 is light on its feet and whips smoothly through the corner. I try harder for the next bend and the Aston drives itself up out of the turn, sweeping a subtle diagonal line away from the apex as it rapidly unspools its body roll and accelerates vividly onto the next straight.

Letting the tight, snarling exhaust howl through the cabin, countryside blurring along the stretching bonnet, I let myself indulge in the briefest racing driver fantasy. Despite the dire warnings of Enzo, Collins is believed to have driven his car to races, Chris Nixon referencing the Aston in his renowned biography Mon Ami Mate. One photo – thought to be from 1956 – even shows 9 FMP tucked inches from a BP International Racing Services van occupied by Juan Manuel Fangio.

After Peter Collins’ death, LML/515 faded rapidly from view. Sold shortly after to a Mr M O Bamberger of British Artid Plastics in Slough, its history is then unknown until it gained its current registration number in 1974 and, four years later, sold at a Christie’s auction for $14,751. In 1982 the Aston shot back into the limelight, attracting the attentions of renowned car-collector King Hussein of Jordan. The reigning monarch immediately dispatched his latest purchase for restoration, eschewing the expertise of Aston Martin Works itself and instead entrusting the DB2/4 to none other than Bristol Cars.

Tony Crook and the staff of his eccentric car manufacturer faced a formidable task. Over the next 19 months, the Filton factory cut away substantial corrosion before handcrafting replacement rear wheelarches, B-pillars and bulkhead. Substantial chassis side member and sill repairs also featured, plus the dismantling and reconditioning of the engine, driveline and suspension. Following a 500-mile running-in period, the car was completed on 21 March 1984. Dispatched to Jordan, it spent the subsequent three years in the Middle East before returning to the UK, with Crook intervening personally to convince the DVLA to reissue its registration number.

The auction house once again beckoned in December 1989, when the Aston crossed the block during a Christie’s sale at Beaulieu. Passing into the collection of Virgin Music supremo and respected marque enthusiast Simon Draper, further restoration work would characterise his ownership, LML/515 racking up a £52,550 bill from Aston Martin Works in 1994. After stints in Belgium and California, the car was bought by present owner Michael Oliver OBE in 2014.

I pull-pause-pull the gear lever and the DB2/4 Fixed-Head Coupé drops into fourth, its intake and exhaust falling to a hushed growl that blends acoustic interest with refinement. Ample torque sweeps me back towards Knutsford, snapping into eager responsiveness each time I downshift and tack into inviting corners. When this prototype took its starring promotional role, Aston Martin called it the ‘most desirable of cars’. Combining a vivid ownership history with its intriguing engineering role and smooth, progressive responses that reward thoughtful driving, LML/515 is a very easy car to want.

The first of a short run of notchback Astons.

A most un- Aston-like Silhouette. The wheel weights up substaintially during cornering. Few DB Astons wear this badge so convincingly. Smiths instruments show all the info a businessman, racing driver or head of state could want.

The ex-Peter Collins Aston DB2/4 engine (Hard to Top) appears to be sporting a pair of SU carburettors yet the caption states Webers.

You are right Derek, and I vow to drink more strong black coffee when proofing pages late at night.